Looking to stream movies online but don’t want to resort to shady services like Primewire? To make sure you’ll always have plenty of options for things to watch, we’ve rounded up 10 of the best Primewire alternatives. Better still, many of these let you watch movies for free.
Ian Garland Streaming, Kodi and VPN Expert 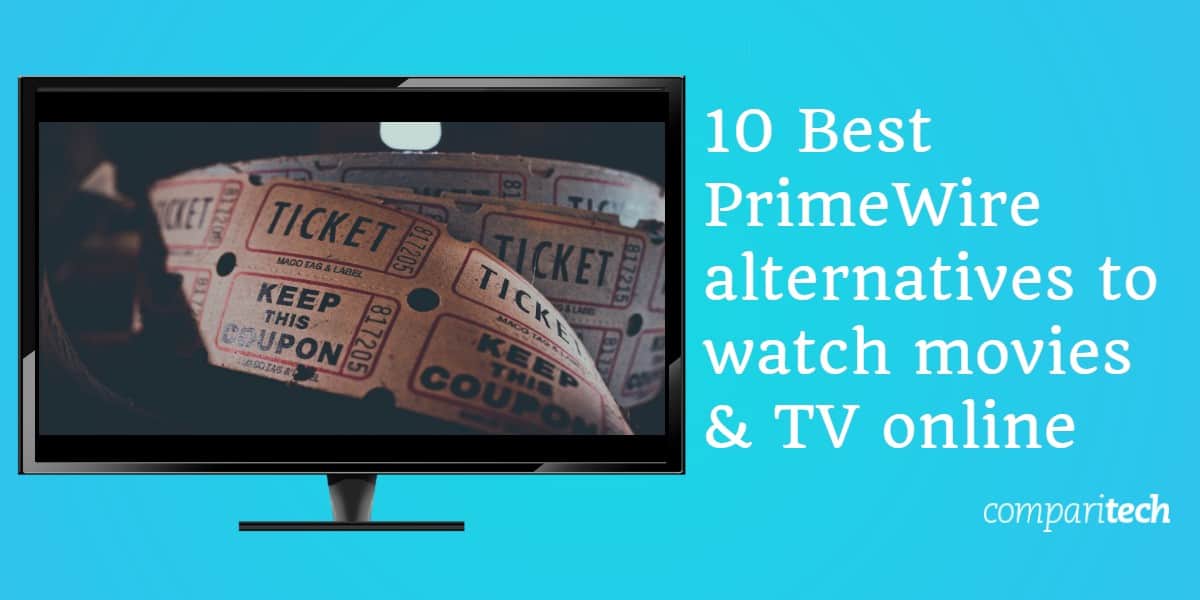 These days, you can watch a huge range of movies online. The problem is that it’s not always clear where a particular title is available. Even then, it can be difficult to tell if you’re on the right service or not. For example, now that Primewire has shut down, there are dozens of other sites using this name to trick users into visiting.

Luckily, this is a fairly simple problem to solve. We’ve researched some of the most popular movie streaming services and compiled a list of the 10 that are best for movie lovers. There will likely be a few platforms you’re already familiar with, but we’ve also included some lesser-known services that allow you to watch blockbuster movies for free online.

Read on to find out which are the best free movie streaming services in 2020: 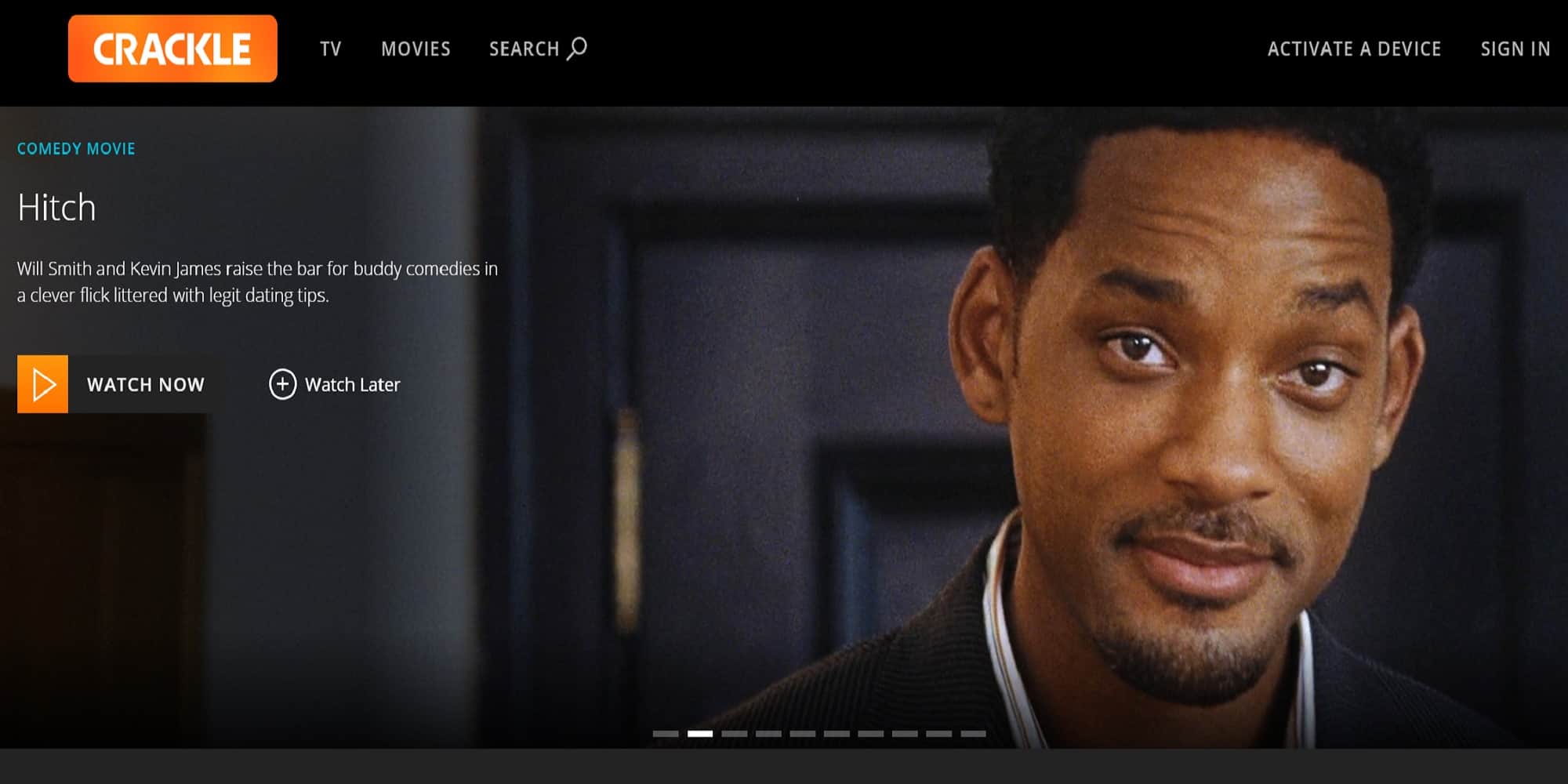 Crackle is a completely free streaming service that offers access to hundreds of well-known movies (as well as TV shows like 3rd Rock from the Sun). Although the website gives users the option to create an account, this is only so you can add titles to your watchlist; if you just want to watch films online, there is no login required.

If you’re the kind of person who likes to stream across multiple devices, you’re in luck. Crackle has apps for Android, iOS, Amazon Fire Stick, Roku, Xbox One, and PlayStation 4. However, this service is currently only available in the US.

Available titles include 30 Days of Night, The Craft, Moon, Trainspotting 2, and Zodiac. 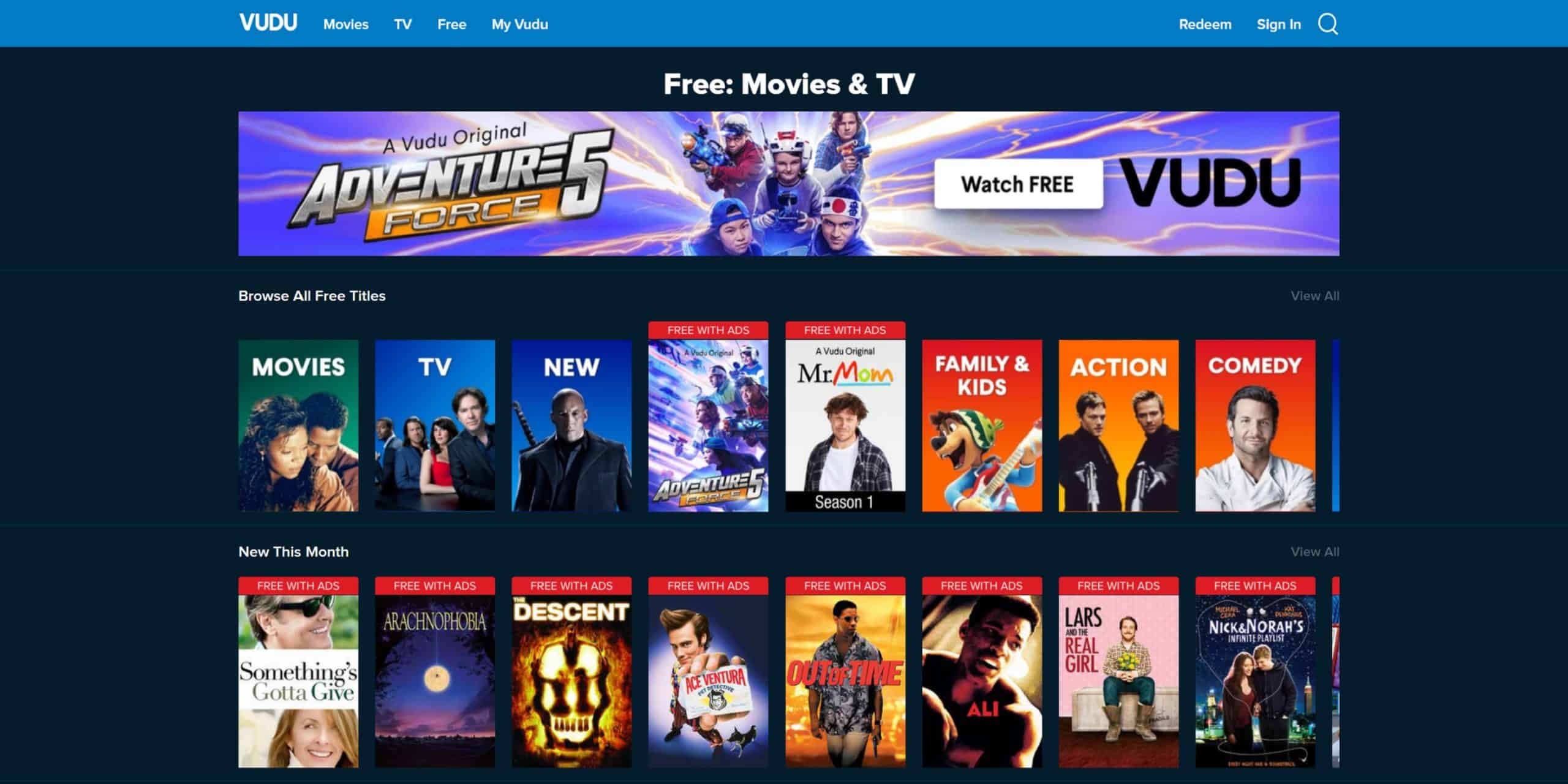 Vudu is perhaps best known for its movie rental service, but if you’re willing to put up with about 30 seconds of ads, you can watch dozens of blockbuster movies, free of charge. You will need to create an account beforehand, but this only takes a minute, and you don’t even have to verify your email address.

This service is only accessible in the US; if you try to use it from abroad, the website simply won’t load. Apps are available for Roku, iOS, Android, PlayStation 4, and Xbox One. 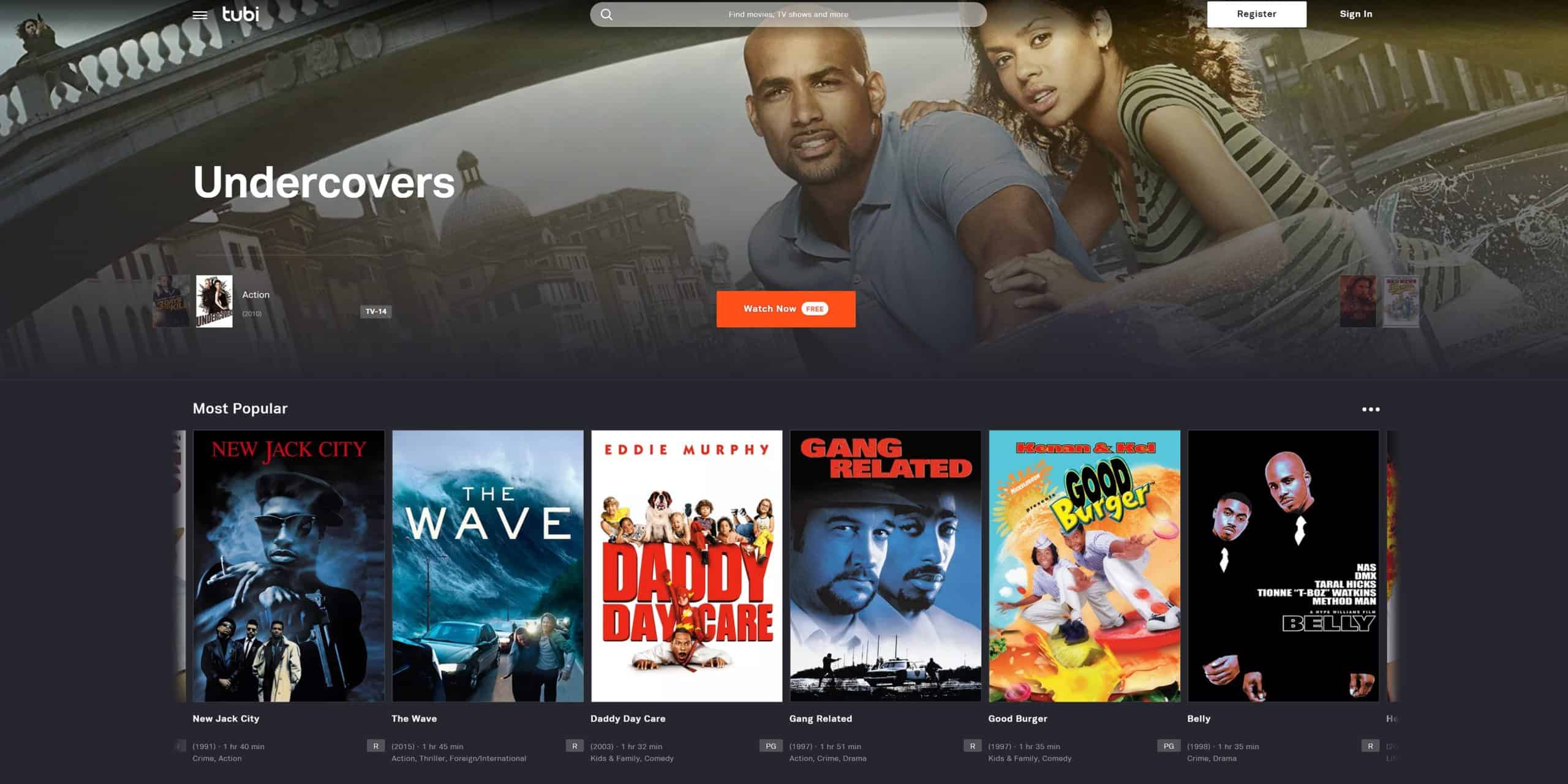 Tubi has a huge library, with thousands of movies and TV shows, all of which can be watched for free. There’s even a dedicated section of the site where you can browse titles that aren’t available on Netflix. If you’d like to create a watchlist, you’ll have to register, but otherwise, you’re free to stream as much as you like, without even logging in.

Unlike many of its free-to-watch rivals, Tubi is available in the US, Canada, and Australia. It’s also in the process of becoming GDPR-compliant so that the service can be used in Europe. Dedicated apps are available for Android, iOS, Amazon Fire TV, Roku, Xbox One, and PlayStation consoles.

While the available content changes from one location to another, the American version of the site lets you stream movies like Good Burger, American History X, We Need to Talk about Kevin, Minority Report, and Teen Wolf. 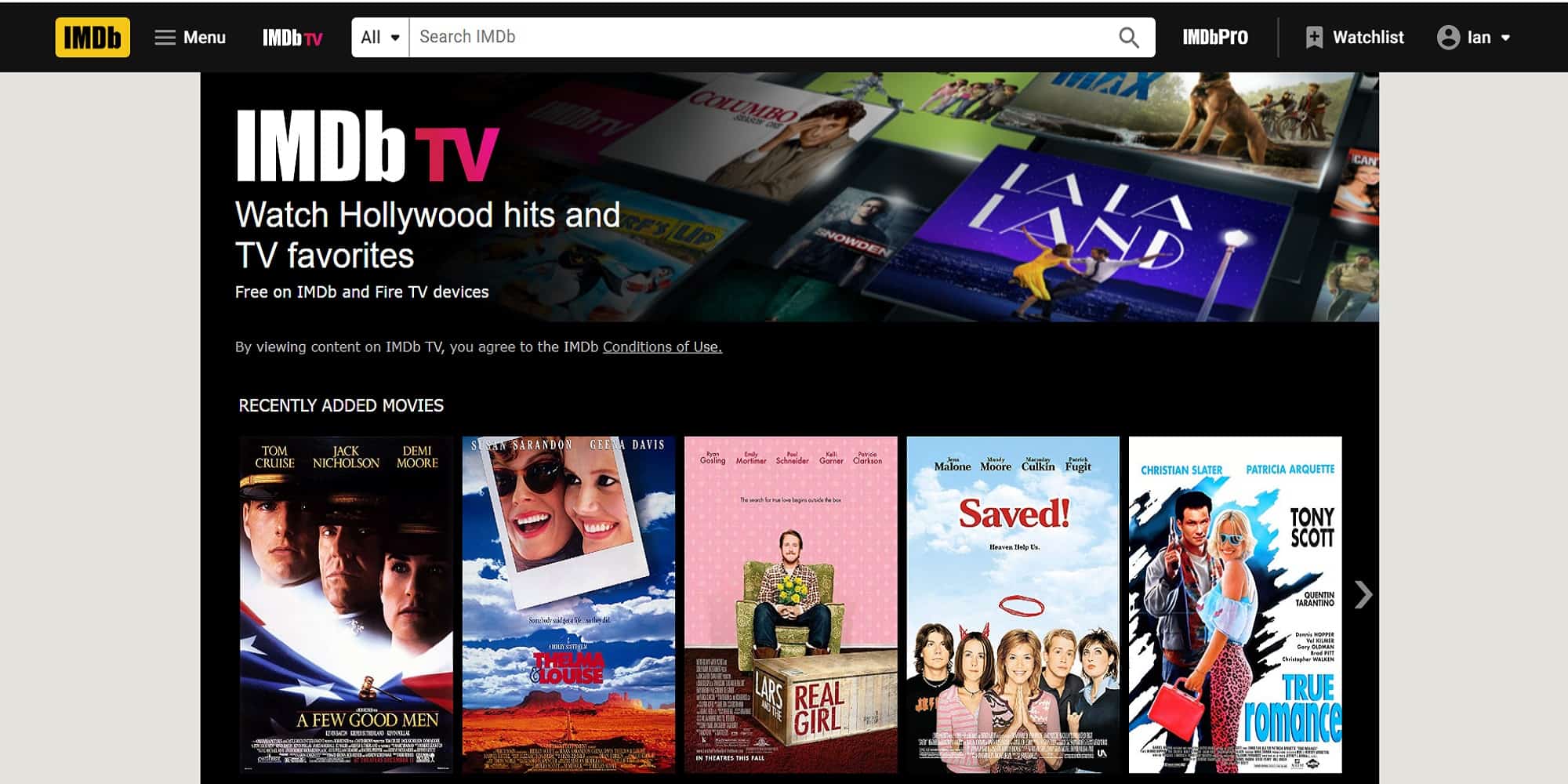 IMDb TV is a free streaming service powered by Amazon. Instead of charging the user to watch, it simply shows a minute or so of ads throughout the movie. You will have to register before you can stream anything, but if you’d prefer, you can sign in with a Facebook or Google account.

Currently, this service is only available in the US. Its apps allow you to watch titles like Memento, Donnie Darko, Cloudy With a Chance of Meatballs, A Few Good Men, and Air Force One on your Amazon Fire TV, Android, iOS, or Roku devices. 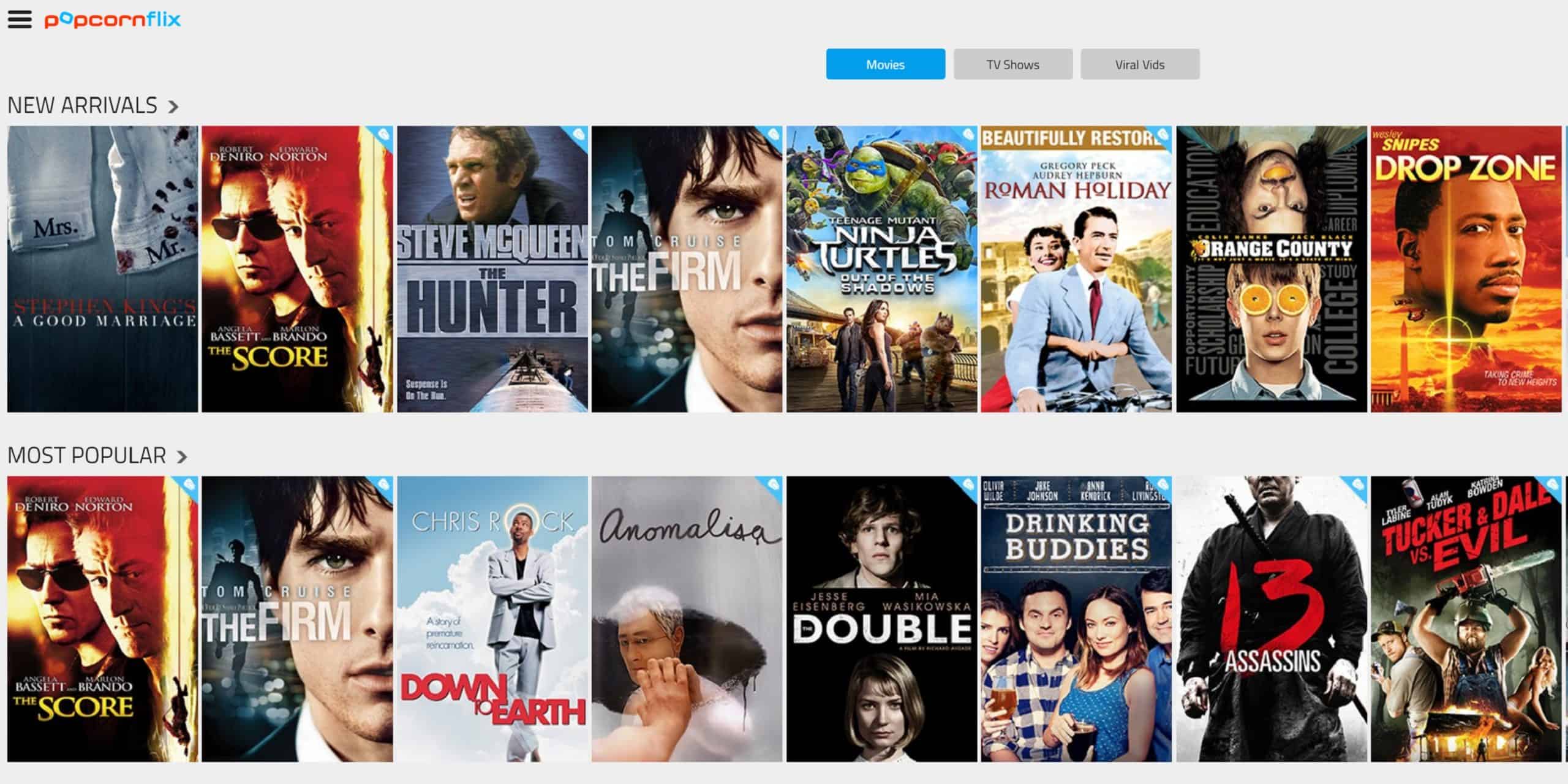 Popcornflix has a sizeable library of free-to-watch films and TV shows including Tucker & Dale vs. Evil, The Girl with the Dragon Tattoo, Anomalisa, A Good Marriage, and Star Trek: First Contact. Better still, you don’t have to sign in to watch anything. There are even official apps so you can watch on your Roku, Xbox One, Android, iOS, and Amazon Fire devices.

Although the Popcornflix website is technically available from anywhere, only users in the US and Canada can actually stream movies. 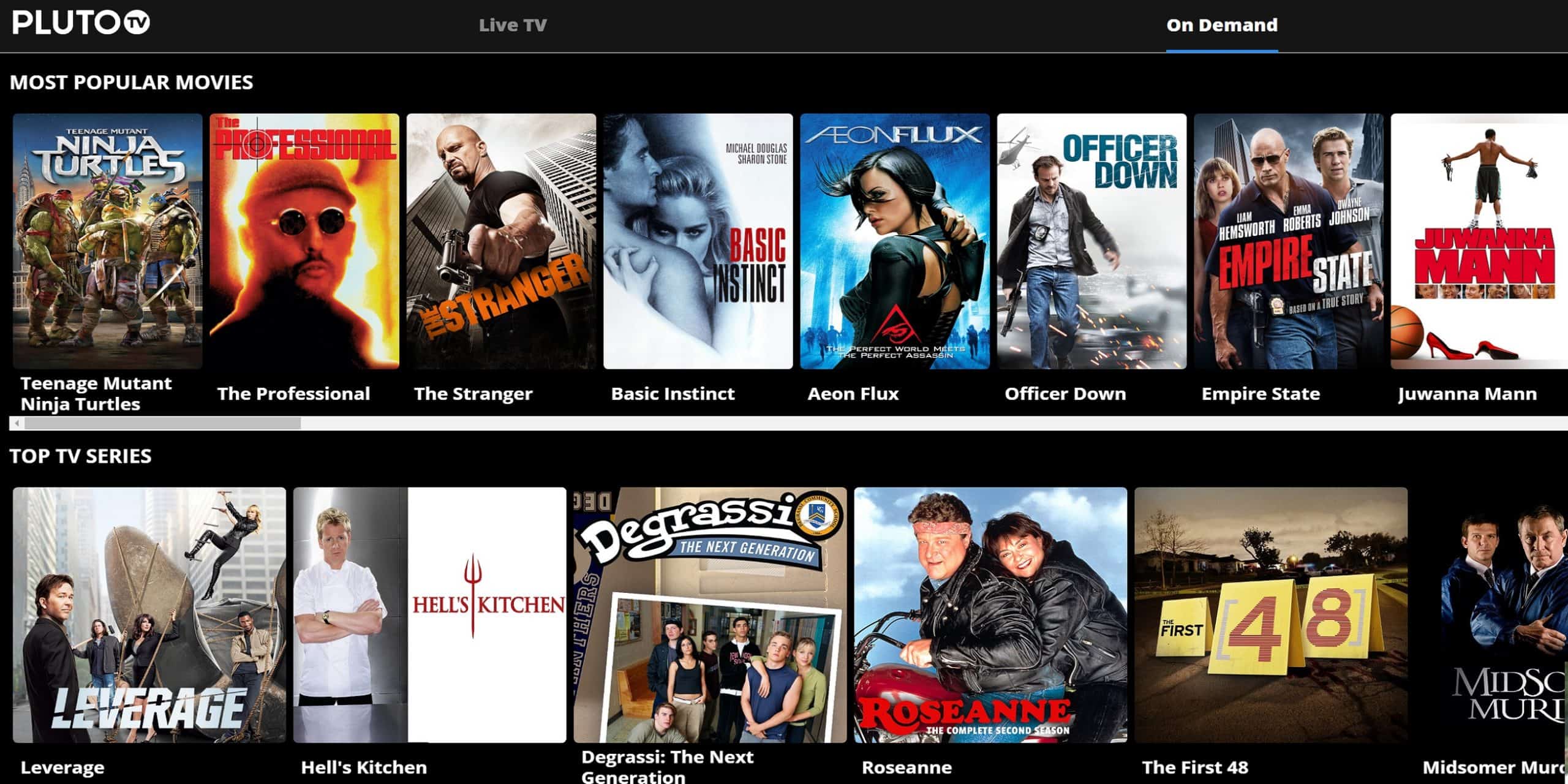 Pluto.tv was designed to simulate the experience of watching traditional TV online. However, it also offers a surprisingly good on-demand library. You should note that Pluto.tv’s library changes depending on which country you’re in but the US version has classic movies like Capote, American Beauty, AI: Artificial Intelligence, The Descent, and Apocalypse Now all available to watch for free.

Although there is an option to create an account, this just lets you save channel preferences, so there’s really no point unless you plan on watching TV via multiple devices. Pluto.tv has apps for iOS, Android, Roku, and Amazon Fire Stick.

Unfortunately, free services have their limits. If you’re looking to stream newer movies online, you’ll likely be better off with a paid streaming subscription. Below, we’ve rounded four of the best-paid streaming services for movies: 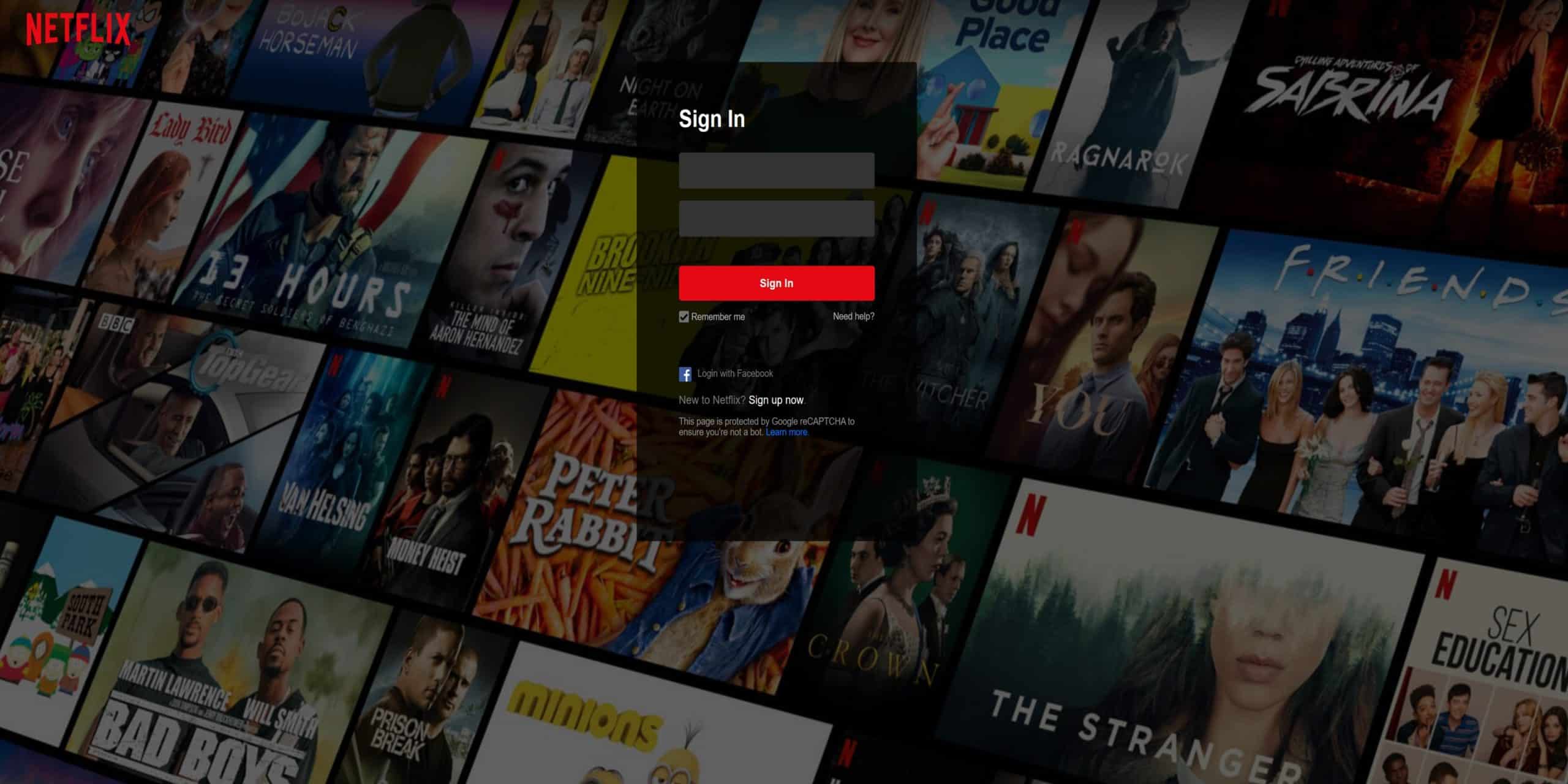 Let’s be honest: this is a bit of an obvious pick. That said, we think Netflix justifies its $8.99 USD per month price tag. For a start, it’s available almost anywhere in the world (although the content differs based on your location). Further, Netflix’s US library includes more than 4,000 movies, and there are new titles added all the time. What’s more, as one of the biggest streaming services in the world, Netflix can afford to license (or sometimes even produce) hits like Marriage Story, Dallas Buyer’s Club, Snowpiercer, Inception, and The Hateful Eight.

The other major advantage of this service is that Netflix is available on just about any device. There are official apps for iOS, Android, Amazon Fire TV, Roku, and game consoles. Most Smart TVs come with Netflix preinstalled. 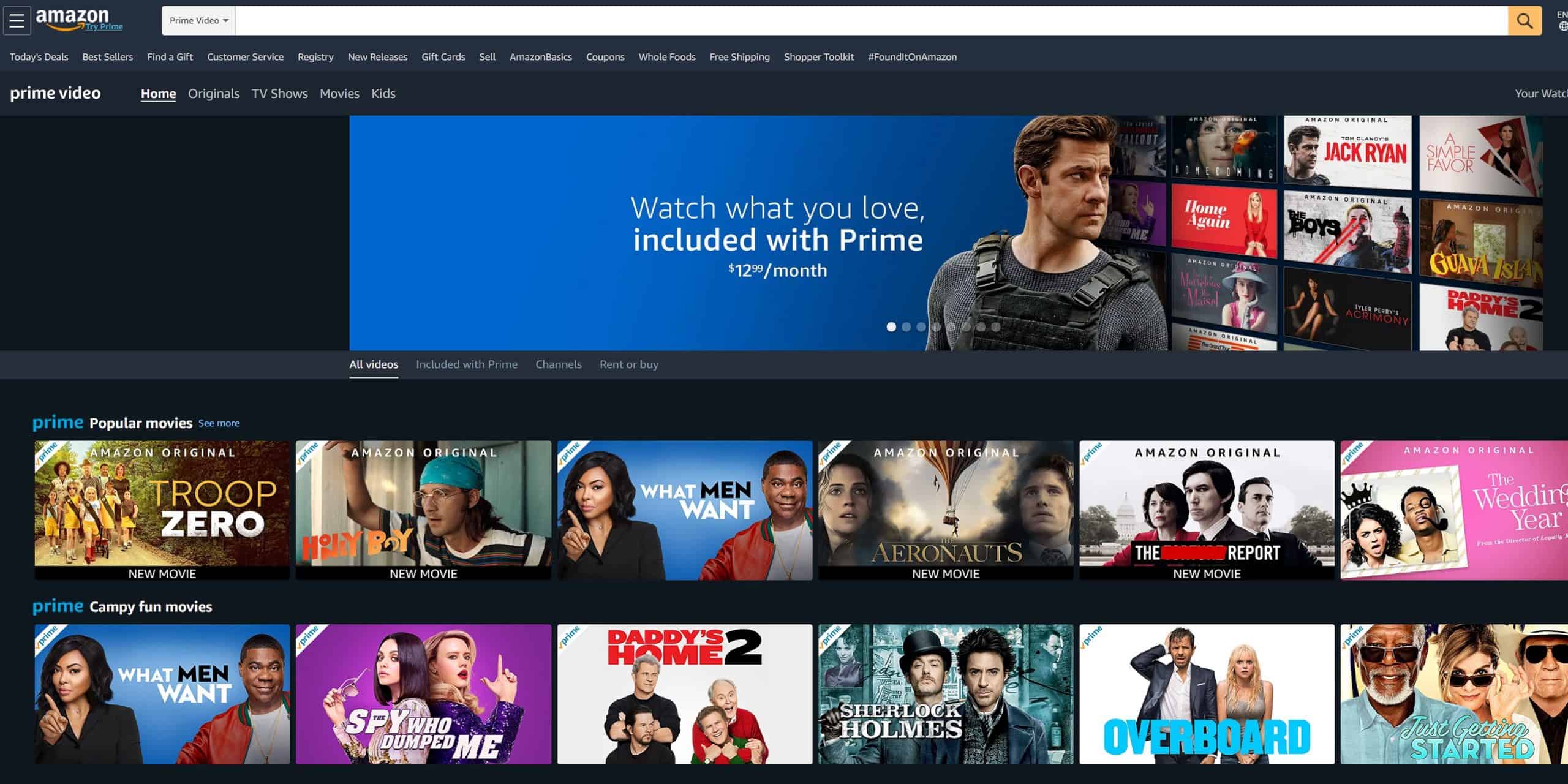 Amazon Prime Video is slightly more expensive than Netflix, at $12.99 USD per month but if you already have an Amazon Prime subscription, it’s included at no added cost. It also has a larger movie library, with over 14,000 titles available (although some of these cost extra to watch). If you’re still not sold, you can always take advantage of the free one-month trial.

The exact movies you can watch vary from one country to another, but if you’re in the US, you can stream box office hits like Midsommar, Honey Boy, Lady Bird, The Big Sick, and Silence of the Lambs. Like Netflix, Amazon Prime Video can be installed on almost any device including smartphones, games consoles, and Smart TVs. 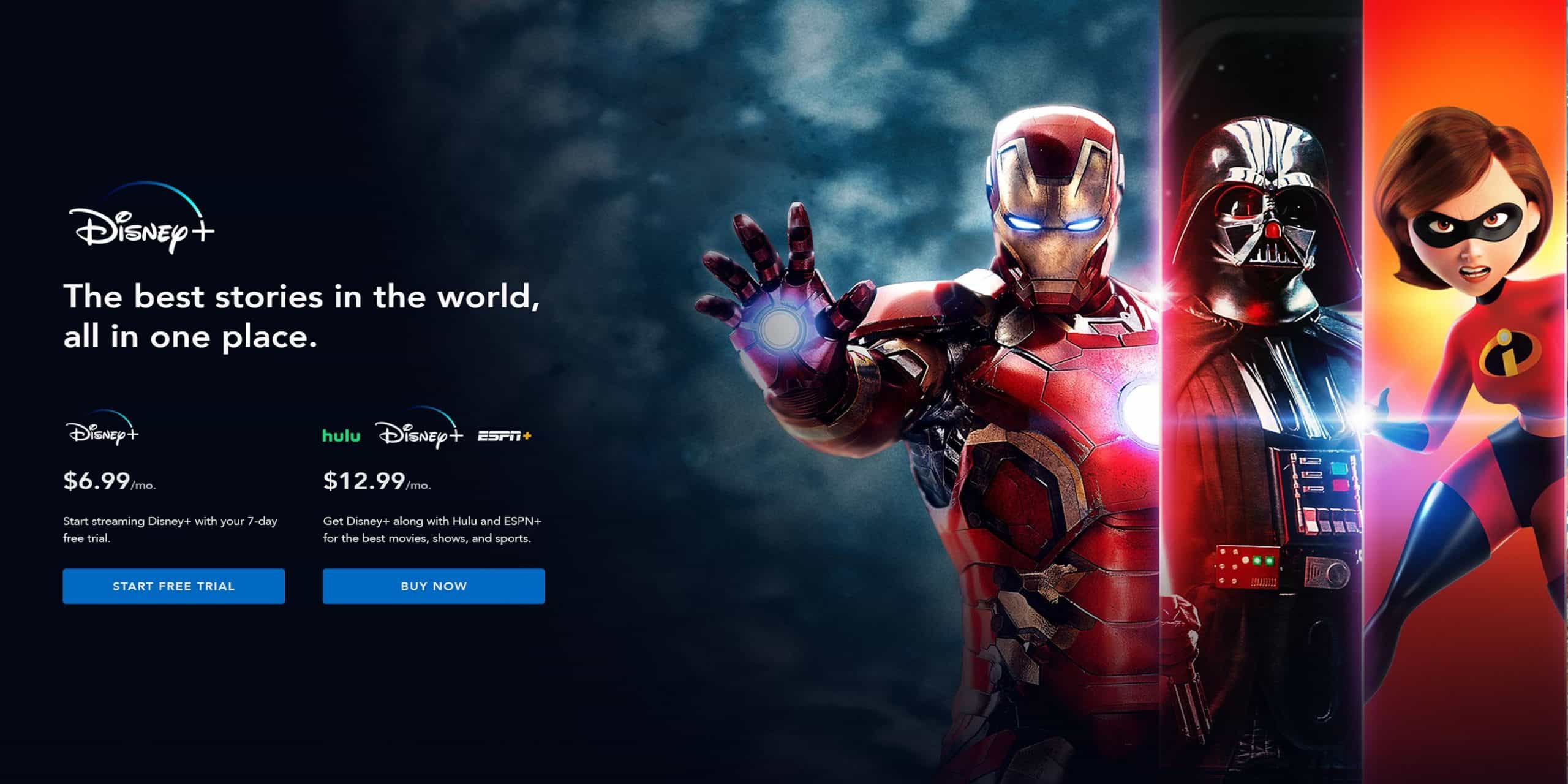 This is the newest service on our list, but (perhaps unsurprisingly) it launched with an almost unmatched library of classic movies. Disney+ isn’t just for kids, either, since it also offers content from several other networks. For instance, viewers in the US can stream Toy Story 4, Frozen, Star Wars: The Force Awakens, Guardians of the Galaxy, and Avengers: Endgame, as well as TV shows like The Simpsons and The Mandalorian.

Disney+ costs $6.99 USD per month but comes with a seven-day free trial. This means that if there’s a specific movie you want to watch, you can just sign up, stream it, and cancel to avoid being charged. This service is currently available in six countries including the US and Canada, with a wider international release scheduled in the next few years. Apps are available for Android, iOS, Xbox One, Roku, PlayStation 4, and Amazon Fire TV. 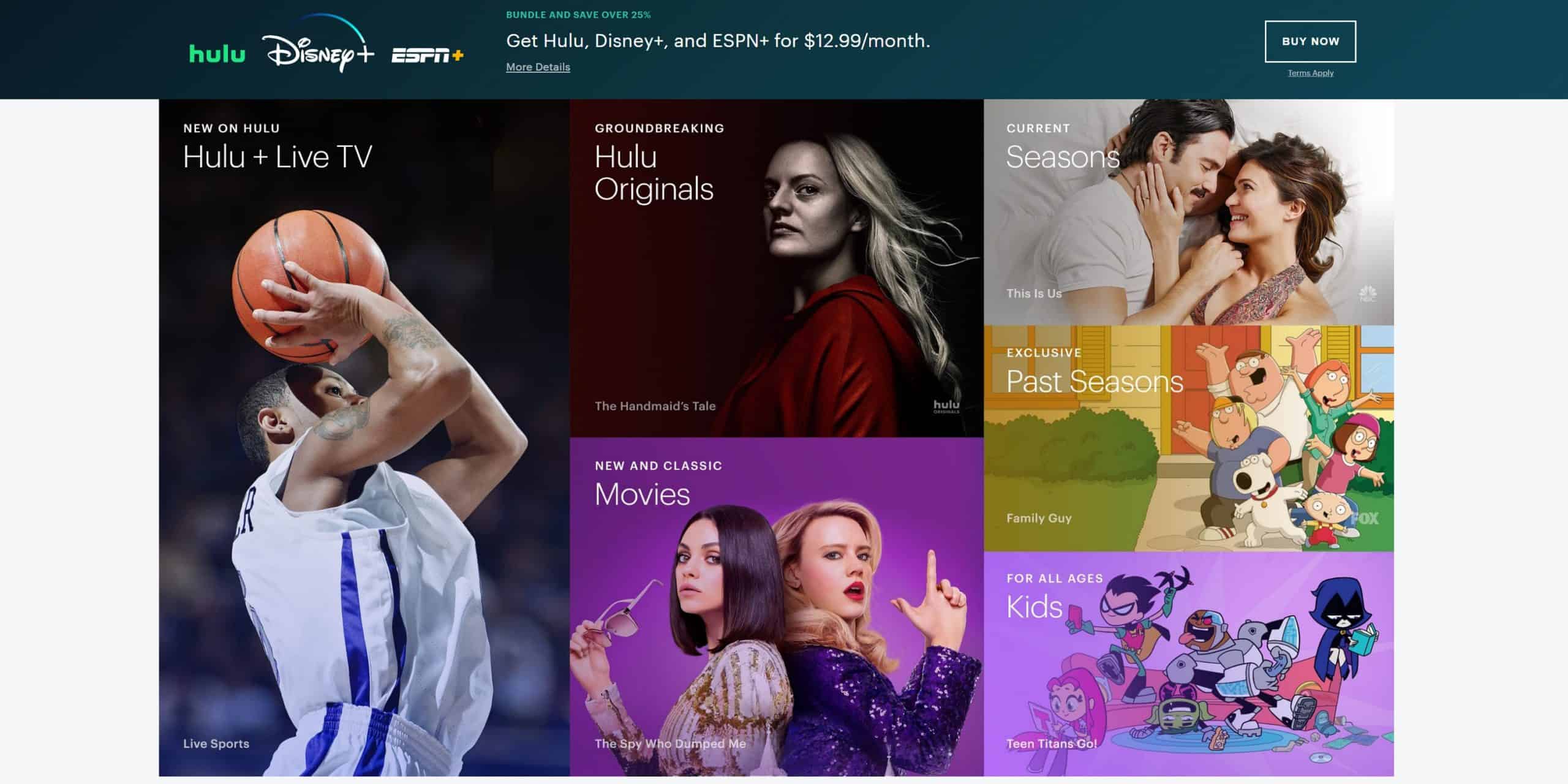 Despite focusing on TV shows more in recent years, with more than 2,000 movies, Hulu is well worthy of your consideration. It costs $6.99 USD per month or $12.99 as part of a bundle that includes Disney+ and ESPN. There is a one-month free trial, so you can always try this service out before you commit.

So what exactly can you watch on Hulu? Well, the specific titles that are available depend on whether you’re in the US or Japan. Viewers in the United States can stream films like Spider-Man: Far From Home, Alita: Battle Angel, Us, Shazam!, and Detective Pikachu. There are official apps for Roku, Amazon Fire TV, iOS, Android, Xbox One, and PlayStation 4.

New to watching films online? Not really sure where to start? Don’t worry; below, we’ll address some of the questions you might have about streaming movies.

Why isn’t a specific service or show available in my country?

Often, streaming services only have the rights to show their content in specific countries. Sometimes, they get around this by having separate libraries for different regions but more commonly, they restrict access to users in one particular location.

The problem with this method is that if you go on vacation, you could find yourself unable to use services that you pay for. Luckily, with a Virtual Private Network (VPN), it’s easy to unblock geo-restricted platforms from anywhere. A VPN will change your IP address and trick region-locked platforms into thinking you’re in a different country.

Here’s how to access your usual streaming services while abroad:

Why shouldn’t I use Primewire or similar sites?

There are plenty of reasons to avoid sites like Primewire, even putting aside the serious harm that piracy does to the movie industry. First, these services are notoriously unreliable; they can be taken offline by lawsuits or copyright claims at any time, and their streams are often low-resolution, with significant artifacting or hardcoded subtitles.

Unauthorized streaming sites pose a real security risk, too. Even if they aren’t actively trying to install malware on your system, there’s a chance they could be using your computer to mine cryptocurrency. Additionally, it’s easy for impostors to replicate the site of an existing service and obtain a similar address (replacing the “.com” in the URL with “.net” or something similar), in an attempt to trick you into using their site instead. Really, it’s far simpler to just use legitimate streaming platforms.

How do I know if the site I’m using is legitimate?

There are a few telltale signs that a streaming service is using unofficial sources. You might notice that it advertises movies that haven’t actually been released on home media yet, or that the video appears to have been recorded inside a cinema.

You’ll likely also find that, no matter what you search for, there are plenty of links to choose from. Most official services skip this step and just show you the video in the highest possible quality your connection can handle. However, the biggest indicator that you’re on an illegitimate site is that everything, even Oscar-winning blockbusters from this year, is free. On the internet, just as in real life, if something seems too good to be true, it usually is.