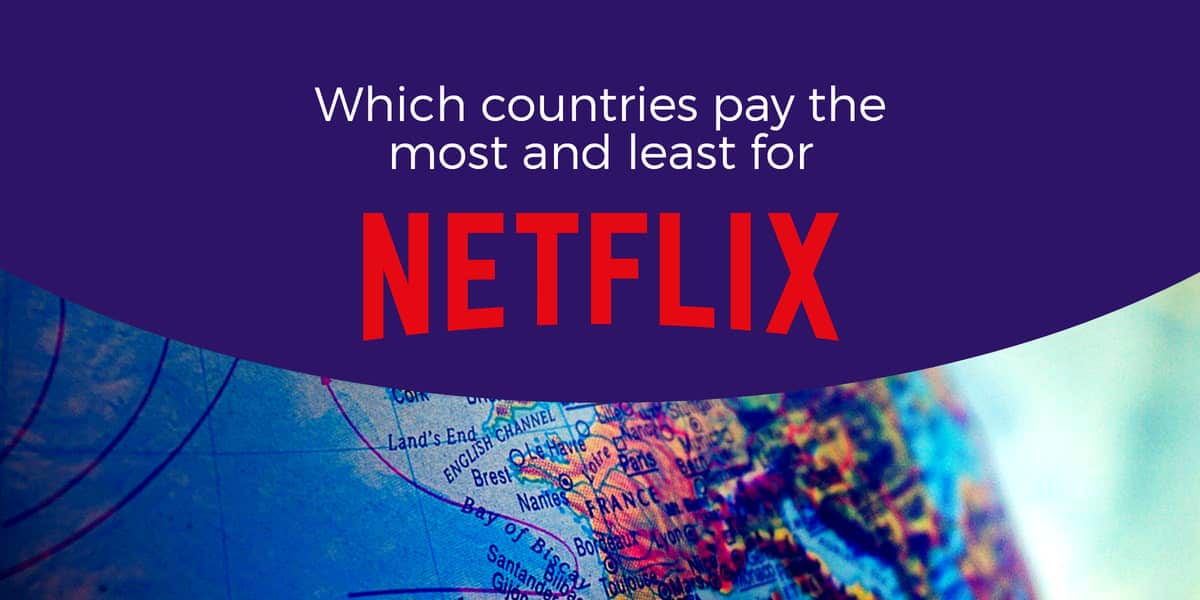 Last year, we analyzed the differences in library sizes and monthly costs of Netflix subscriptions around the world. We found a huge disparity.

Following several more price increases, including the ones in Australia, Belgium, Mexico, and Singapore, we’ve updated our analysis. And we’ve also expanded it to look at which countries have access to the best quality libraries (according to average IMDb ratings), and which countries enjoy the fastest internet speeds when using Netflix.

To gather this data, we’ve taken a look at several different factors.

Second, we evaluated the cost per month in each country and how these shape up against others (based on current exchange rates at the time of writing).

Our study shows a massive disparity when cost per title is analyzed between different countries.

Due to the cheap price, Brazil, South Africa, and India are actually the most cost-effective countries to watch Netflix in.

Furthermore, the more UK and US customers pay for plans, the less cost-effective they seem to be, even when you consider the higher number of users for each account. The UK drops out of the top ten when it comes to its cost per title for premium plans, while the US plummets from 18th place to 23rd or 21st when you upgrade from basic to standard or premium, respectively.

When it comes to value for money, Brazil, South Africa, and India win hands down on cost-per-title value across all three plans.

Even though Brazil has a smaller-than-average library size, 4,286 titles compared to 4,805 titles, its cheap cost across all three plans means its cost per title puts it in the top spot for basic and standard plans and joint second for premium ones.

The top 10 most cost-effective countries for basic plans

The top 10 most cost-effective countries for standard plans

The top 10 most cost-effective countries for premium plans

At the other end of the scale are Denmark and Switzerland which feature at the bottom for all three plans when it comes to cost-effectiveness.

Making up the rest of the bottom 10 across all three plans are European countries. Despite many of these countries having lower-than-average library sizes (often over 2,000 less than the UK’s library), these customers still pay an above-average fee for their Netflix subscriptions (or a premium price if you’re Swiss and have a standard or premium subscription).

Top 10 cheapest places to get Netflix

In fact, on a cost-per-month basis, the US and UK don’t fare too well. The UK just makes it into the top 10 for its basic plan but thanks to its price hikes across standard and premium plans last year, it falls dramatically through the rankings with each upgrade (18th and 22nd cheapest place for standard and premium plans, respectively). Meanwhile, the US only just makes the top 20 for its basic plan (ranking 17th), finding itself 26th for standard plans and 23rd for premium plans.

We’ve analyzed the monthly cost of Netflix in the top 10 cheapest areas relative to the average monthly income in a country to determine where Netflix may “feel” more expensive.

The 10 cheapest places for basic plans

The 10 cheapest places for standard plans

The 10 cheapest places for premium plans

Top 10 most expensive places to get Netflix

In contrast to the above, the most expensive monthly subscriptions for Netflix are found in the below areas. And, if you look closely, you’ll see they are made up solely of European countries with Nordic countries often getting the rawest deal (alongside Switzerland).

According to these statistics, if you live in Switzerland, you’re paying 38.7, 42.3, or 42.9 percent more than average for a basic, standard, or premium plan, respectively. This is over 97 more per plan than Brazilians.

The 10 most expensive places for basic plans

The 10 most expensive places for standard plans

The 10 most expensive places for premium plans

For more comparisons on the cost per month of Netflix in the countries with the highest user penetration, read our analysis which looks at current prices as well as all of the price increases since Netflix was launched.

Which countries enjoy access to the best films and TV shows?

While the Swiss are paying significantly more for their Netflix subscriptions than other countries, perhaps they’re enjoying access to better, more premium content?

To find out, we looked at the percentage of titles within various IMDb rating categories. 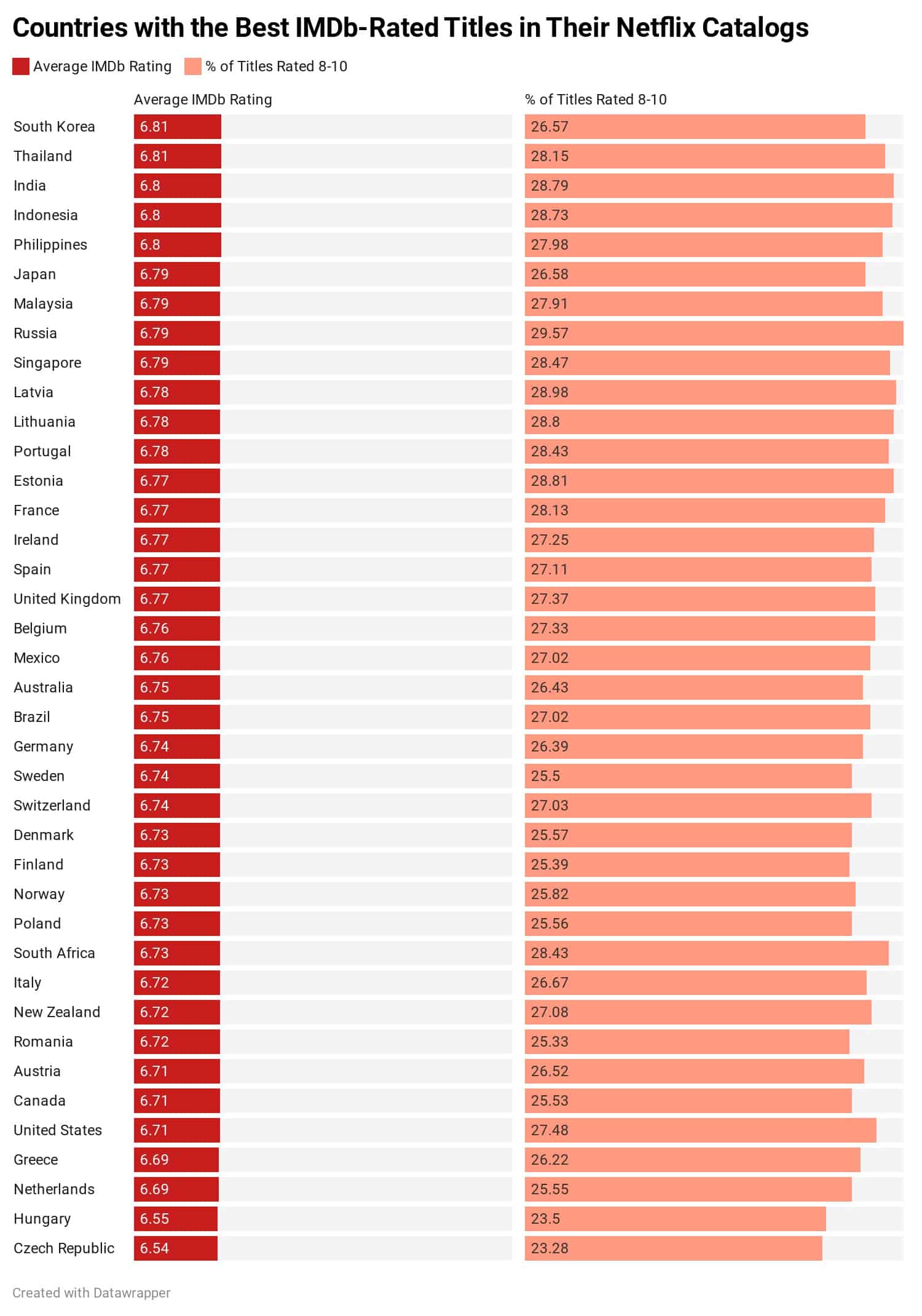 Interestingly, we can see that there isn’t much difference between the average IMDb rating across all countries. But those that do seem to have a slight edge are Asian countries.

However, some countries do seem to get a more elite catalog of titles with a higher percentage of movies and TV shows rated 8 to 10 on IMDb. Russia comes out on top with almost 30 percent of its titles being found in the top-rated IMDb category.

Hungary and the Czech Republic find themselves at the bottom on both counts with an average IMDb rating of 6.5 and just less than 24 percent of their titles being in the 8 to 10 category.

Our cheapest country, Brazil, finds itself mid-table in both areas with an average IMDb rating of 6.75 and just over 27 of all its titles being rated 8 to 10 on IMDb. It’s a very similar story in the most expensive country, Switzerland (average of 6.74 and 27.03% of titles in the 8 to 10 category). But in one of our other cheapest countries, India, customers do seem to get more quality for their money. Here, users enjoy an average IMDb rating of 6.8 and almost 29 percent of the catalog is within the 8 to 10 category on IMDb.

What about the US?

It ranks mid-table for its percentage of titles in the 8 to 10 category but is one of the worst-performing countries for average IMDb rating (6.71%). However, as we have seen, there are minimal differences between the averages.

Which countries enjoy the fastest internet speeds when streaming Netflix?

Now we know that there isn’t much difference in the quality of titles available by country, perhaps you pay more for a better user experience with faster internet speeds?

We analyzed Netflix’s ISP speed index to find out. Due to lowered video quality and the work Netflix has been doing with ISPs amid the pandemic, data was only available from February 2019 to 2020, so our averages are based on this. 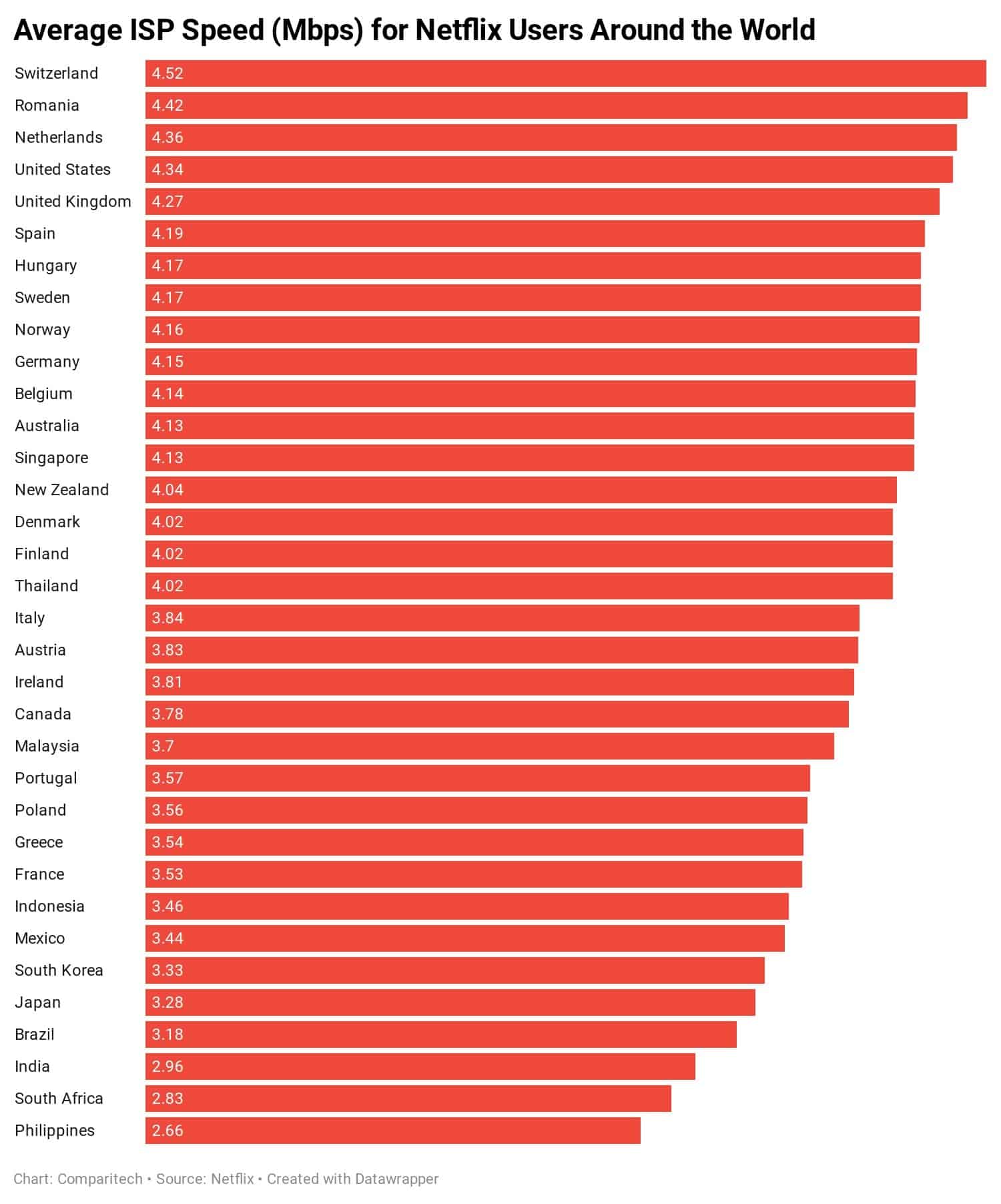 Please note: No data was available for the Czech Republic, Estonia, Latvia, Lithuania, or Russia, so these have been omitted from the chart.

Switzerland users can breathe some sigh of relief as the country takes the top spot here with users enjoying an average internet speed of 4.52 Mbps from February 2019 to 2020. In sharp contrast, those in our most cost-effective countries — Brazil, India, and South Africa, had the worst average internet speeds (alongside those in the Philippines).

Where should you opt to watch Netflix?

Despite its great user experience with prime streaming speeds, Switzerland is not going to be the place to opt for a Netflix subscription if you love a good deal.

Bargain-lovers, however, may want to opt for a subscription in Brazil, India, or South Africa, but will have to sacrifice some quality and titles in order to get their cheaper pricing.

But those who want the best of both worlds may be better opting for a subscription from the likes of Canada or the UK. With reasonable pricing and cost-effectiveness, two of the largest libraries on Netflix, and access to a large number of top titles these two countries are the all-around highlights from our study.

Not living in any of the aforementioned countries? Then here are the best VPNs for Netflix so you can get the version of Netflix you want — anywhere.

Argentina and Turkey have been removed from our study due to ongoing currency fluctuations.

The percentage of library titles within each IMDb rating category is based on a sample of data (approx. 1,000 titles).

Full datasheet for all countries and plans: https://docs.google.com/spreadsheets/d/1wxJuu4QQje38ZSH_SqlDPtYdHnYcfhCW1lbNsbq8oss/edit?usp=sharing