How to watch The Voice UK 2020 online free

It’s a new year, which can only mean one thing: another season of The Voice. Below, we’ll let you know when the show airs, who the judges are, and how you can live stream The Voice UK 2020 online from abroad using a Virtual Private Network (VPN).
Ian Garland Streaming, Kodi and VPN Expert 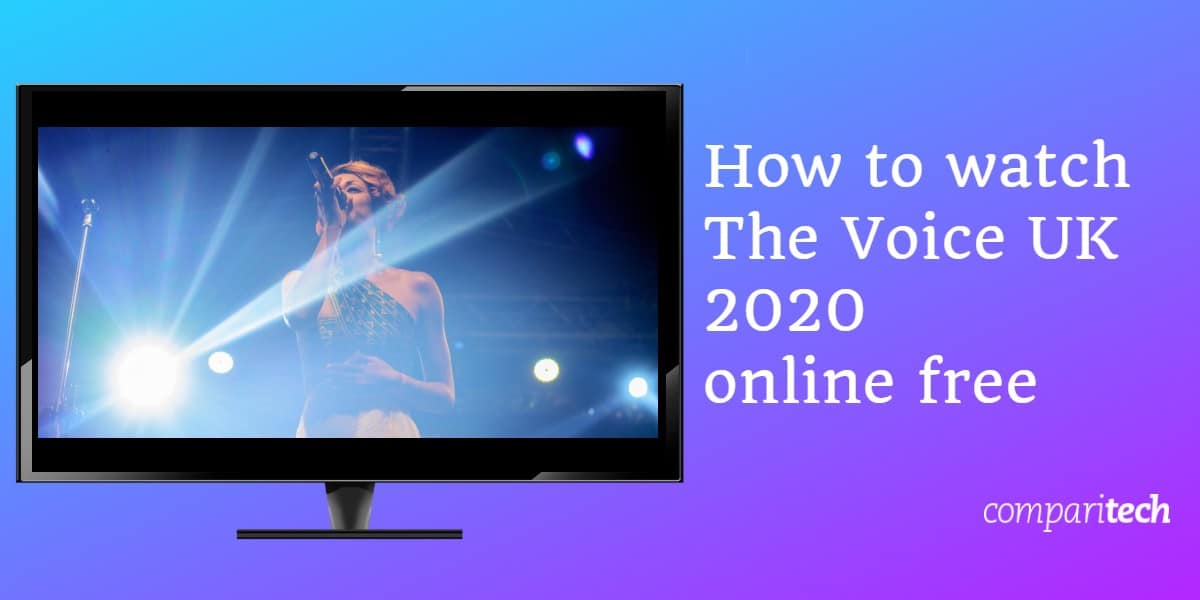 The ninth season of The Voice UK is already underway. New episodes air every Saturday from 8:30–10:05 PM GMT (3:30 PM EST / 12:30 PM PST) and if the release schedule is the same as in previous years, there’ll be seven episodes in total. Don’t worry if you’re outside of the UK; below, we’ll not only tell you which channel this show is on, we’ll also explain how to watch The Voice from abroad for free.

It’s important to note that we’ll only be recommending official sources for watching The Voice. Given this show’s popularity, unlicensed streams are almost inevitable, but we strongly advise against using them. The video is often of very low quality, plus these streams can be taken down at any moment for copyright violation. Besides, you can watch The Voice 2020 for free, which means there’s no reason to use unreliable, unauthorized streams.

The Voice season nine will only be shown on geo-restricted streaming services. This means that if you’re traveling abroad and there’s no official broadcaster in your country, you’ll need a VPN to watch on your usual home streaming services.

How to watch The Voice 2020 online abroad for free

Region-locked platforms find the user’s location by examining their IP address. However, once connected to a VPN, all these services can see is the location of the server you’re using. This makes it easy to access your usual services while abroad on vacation. The process is actually quite simple, too; just follow the steps below to watch The Voice from abroad.

Here’s how to watch The Voice UK online (free) from anywhere:

New episodes of The Voice air live each week. To ensure you don’t miss the beginning of an episode, we recommend making sure your VPN works as expected in advance. Most major VPNs offer 24/7 support over live chat and email.

As ever, The Voice 2020 will be broadcast exclusively on ITV. The good news is that this means you can watch every episode free of charge on ITV Hub. If you have other plans in the evenings, you can also stream season nine on-demand shortly after each episode airs. It gets even better; most shows are removed from the service after a few weeks but season 9 of The Voice UK will be available for three months.

British law says that you need a TV license to watch anything online at the same time that it’s on TV. You should note, though, that while ITV Hub asks the user to confirm that they have a license, there’s no verification in place. Additionally, you do not need a license to watch The Voice UK on-demand.

ITV Hub is region-locked, meaning you’ll have to either be in the UK or connected to a British VPN server to use it. Still searching for the right VPN? ExpressVPN comes with a 30-day money-back guarantee so you can use it to stream The Voice UK risk-free. If you’re unsatisfied, just cancel during this period to receive a full refund.

The British version of The Voice will only be shown in the UK, so you’ll need to use a VPN to watch from abroad. However, there are several regional spinoffs of this show, many of which have a new season this year. Take a look below to find out how to watch your country’s version of The Voice online:

The eighth and final season of Canada’s French-language The Voice spinoff, La Voix, will premiere February 9 on TVA. This year’s coaches are Garou, Pirate’s Heart, Marc Dupré, and Pierre Lapoint.

You can watch every episode for free online, without even having to create an account, and if you miss an episode, it’ll be available on-demand the following day.

TVA is geo-restricted, so if you’re outside of Canada, you’ll have to use a VPN.

A ninth series of The Voice Australia is in the works, although there’s no confirmed premiere date as yet. If it’s in line with previous seasons, we can expect the first episode to air sometime in Spring. We do know that last season’s judges (Kelly Rowland, Delta Goodrem, Boy George, and Guy Sebastian) will all be returning.

Season nine of The Voice will be available live and on-demand on 9Now. This service is completely free to use, but you’ll have to create an account before you can watch anything. Additionally, as it’s geo-restricted, you’ll need a VPN to watch from outside of Australia.

Unfortunately, we don’t know when the next season of The Voice USA will air. However, it can’t be too far away, since auditions are only running until February 15. The judges have been confirmed, though: this year, they’ll be Nick Jonas, Kelly Clarkson, John Legend, and Blake Shelton.

NBC will be showing the new season. Episodes will be freely available on-demand, and if your cable TV package includes NBC, you can sign in to the website and watch live at no added cost. You could also sign in with a Hulu, fuboTV, AT&T TV Now, YouTube TV, or Sling TV account.

NBC is region-locked, which means it’s only available in the US. However, if you’re traveling abroad, you can access it as normal by connecting to an American VPN server.

The Voice’s unique selling point is that contestants aren’t judged on their appearances. The show’s judges sit facing away from the stage, and if they’re impressed by someone’s singing, they press a button that turns their chair around. If more than one judge does this, the contestant can choose who they’d prefer to be mentored by.

From here on out, it’s basically a knockout contest. In the first two rounds, acts compete head-to-head, with the judges ultimately deciding who stays. However, in the final live rounds, the audience, the public, and the judges all have a say. The winner gets a recording contract with Polydor Music.

Who are the judges on this season of The Voice UK?

There’s one change this year: Jennifer Hudson won’t be returning due to other commitments. Instead, the acts will be judged by Olly Murs, Megan Trainor, will.i.am, and Tom Jones. Emma Willis will once again be hosting.