DDoS attacks are on the rise, but hackers are also adapting their strategies to counteract growing mitigation techniques. Here's a review of the latest stats highlighting DDoS attacks in 2018-2020.
Sam Cook Data journalist, privacy advocate and cord-cutting expert 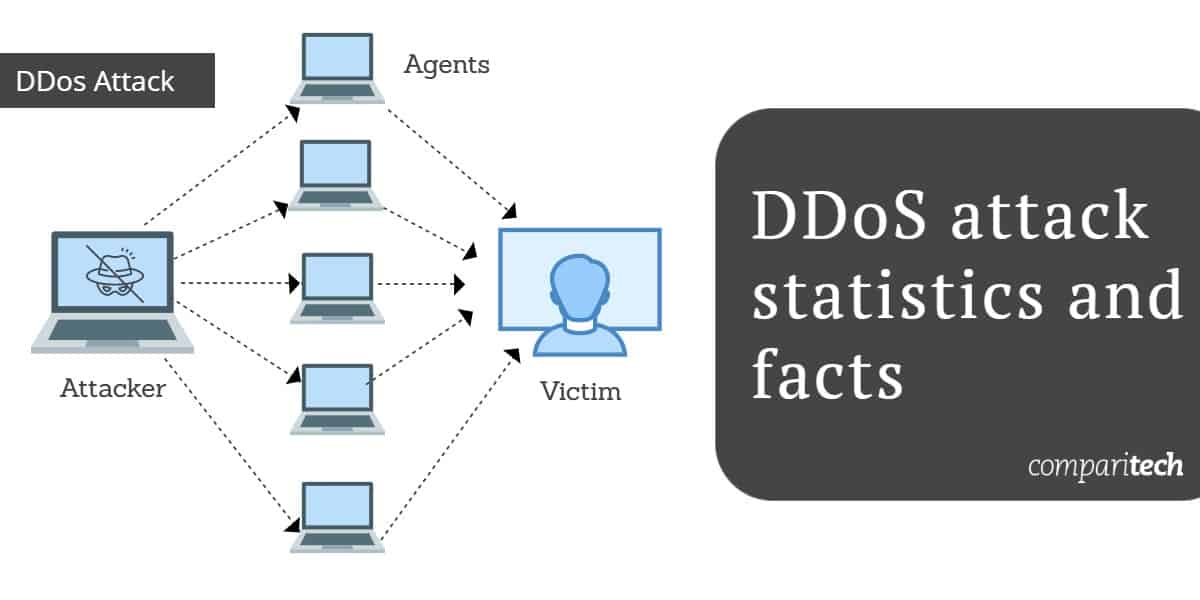 Of the many types of criminal activity that occur on the web, few are more puzzling and difficult to prevent than distributed denial-of-service (DDoS) attacks. These attacks can bring down even the largest websites by overloading servers with more requests than they can handle. Unable to meet the load of junk requests, servers crash and often require hours to restore.

Norton, in fact, calls DDoS attacks “one of the most powerful weapons on the internet”, and with good reason. Denial-of-service attacks can come at any time, impact any part of a website’s operations or resources, and lead to massive amounts of service interruptions and huge financial losses.DDoS attacks were once a thing of mischief, but data shows they’re increasingly becoming a tool to earn income for cybercriminals or cause disruption for political purposes.

DDoS attacks may have become slightly less common in Q3 2020, according to Kaspersky Lab, but this is likely due to an abnormally high number of attacks earlier in the year, as more of us began working from home.

Below, we’ve laid out some major stats and facts that highlight how DDoS attacks are transforming and impacting the web.

See also: How to stop a DDoS attack

Here’s a round-up of some of the most telling DDoS attack statistics:

1. DDoS attacks are on the rise

DDoS attacks have been steadily increasing in frequency over the past few years, and Q3 of 2020 saw a roughly 50% increase over 2019. When the coronavirus pandemic forced us all online in Q2, we witnessed a huge spike in the number of attacks. In fact, there were more than twice as many as there were just a few months prior.

The amount of DDoS activity in 2020 is currently trending higher than in previous years. Further, the average attack now lasts 24% longer, and the maximum attack length has jumped by 264%. The number of DDoS attacks over 100 GB/s in volume increased 776 percent in Q1 2020.

On the plus side, more people are becoming aware of the threats these attacks pose. In fact, in the first six months of 2019, the number of searchable web pages covering “denial of service attacks” surpassed the total number of results in all of 2018.

5. DDoS-for-hire sites shut down in 2018, which may have resulted in a decrease in DDoS activity that year

In late 2018, the FBI took down a dozen DDoS-for-hire marketplaces, and in April 2018, Europol shut down Webstresser, the world’s largest marketplace for buying DDoS attacks. At the time it was shut down, Webstresser had over 130,000 registered users.

This activity may have been part of the decline in DDoS attacks witnessed in 2018. However, current data shows that the number of DDoS-for-hire websites bounced back in 2019, which might also play a role in the large increase in DDoS activity in 2019.

6. The longest DDoS attack in history occurred in 2019

Back in 2018, a DDoS attack shattered existing records by flooding their target’s systems with data for 329 hours, or nearly 2 weeks. In Q2 of 2019, though, Kaspersky analyzed commands sent to DDoS networks and discovered an even longer attack, one that had lasted 509 hours.

7. Current data shows most DDoS attacks are increasing in power

Research shows that the average DDoS attack in 2020 uses more than 1 Gbps of data, which is more than enough to scuttle most small-to-medium-sized websites. Further, we’ve seen a significant increase in the average length, with most attacks now lasting 30 minutes to an hour, instead of ten minutes or less as in previous years.

Even so, DDoS attacks are becoming less about prolonged attacks and more about attack size and frequency. Over 80 percent of DDoS attacks in Q4 2018 lasted less than four hours. However, around 0.11% of attacks lasted more than 130 hours.

Amazon revealed that in Q1 of 2020, it was forced to counter a 2.3 Tbps DDoS attack. This is important for several reasons; first, it’s the largest recorded attack in history, almost four times the throughput of the previous record-holder (587 GB/s).

The methods used to create DDoS attacks are also changing. A growing number of attackers are using multi-vector DDoS attacks, combining different DDoS attack methods into one, short attack, and then repeating again soon after. In fact, according to Link11, one attack used 14 different vectors,

11. SYN attacks are now the most common form of DDoS attack 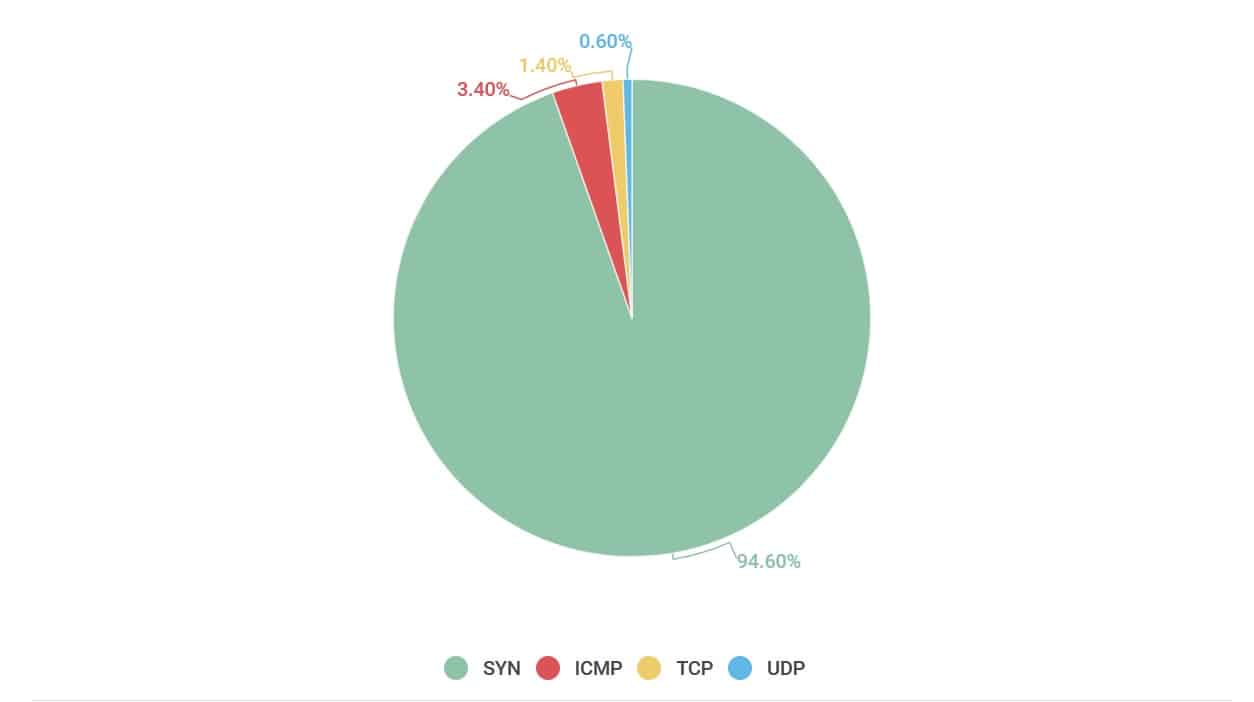 UDP attacks were no longer the most common individual form of attack in 2020, having been nearly forgotten in favor of SYN attacks. Mixed-method attacks were the largest type of DDoS attack overall, however, and typically involved HTTPS floods and mixed attacks with HTTP elements.

Additionally, a majority of DDoS attacks do not completely saturate uplinks. Corero found that only 0.6 percent of DDoS attacks reached “full pipe” uplink saturation, which is defined as more than 95 percent of usage in the uplink. Of those that reached saturation levels, most (around 95 percent) lasted less than 10 minutes.

Finally, not all DDoS attacks are designed to crash servers. A new type of attack, credential stuffing, is currently targeting many different sites, especially video game services. In this attack, hackers test a load of credentials against their database to verify stolen account information. Although not a DDoS attack strictly by definition, credential stuffing can increase traffic volume on a site and have a similar impact to a DDoS attack. (Source: Neustar)

14. Despite their distributed nature, DDoS attacks are geographically concentrated

DDoS attacks quite often utilize botnets to send massive amounts of traffic to a single server to overload it with requests. Over 20 million “DDoS weapons”, or infected IP addresses across the world, are currently being used as part of DDoS attacks. The Mirai malware and its many variants are currently the most popular malware used to create botnets for DDoS attacks, although others do exist as well.

15. India and China are botnet hubs

According to Spamhaus, the country with the most botnets is India, with over 2,345,000 bots. China is the second-worst with over 1.4 million bots. Some autonomous system number (ASN) operators—mostly ISPs—also have larger numbers of infected IP addresses due to extensive botnet malware. However, which ASN operators are most impacted is more difficult to determine. Spamhaus identifies the top 5 impacted ASN operators as:

Meanwhile, A10 Networks writes that the top 5 ASNs with infected IP addresses are:

DDoS attacks can be launched from anywhere, however, regardless of where the infected computers exist. As one might expect, most DDoS attacks also tend to originate primarily from a select few countries.

16. Hackers in China launch the most DDoS attacks, followed by those in the US and Russia

The majority of DDoS attacks are launched from: 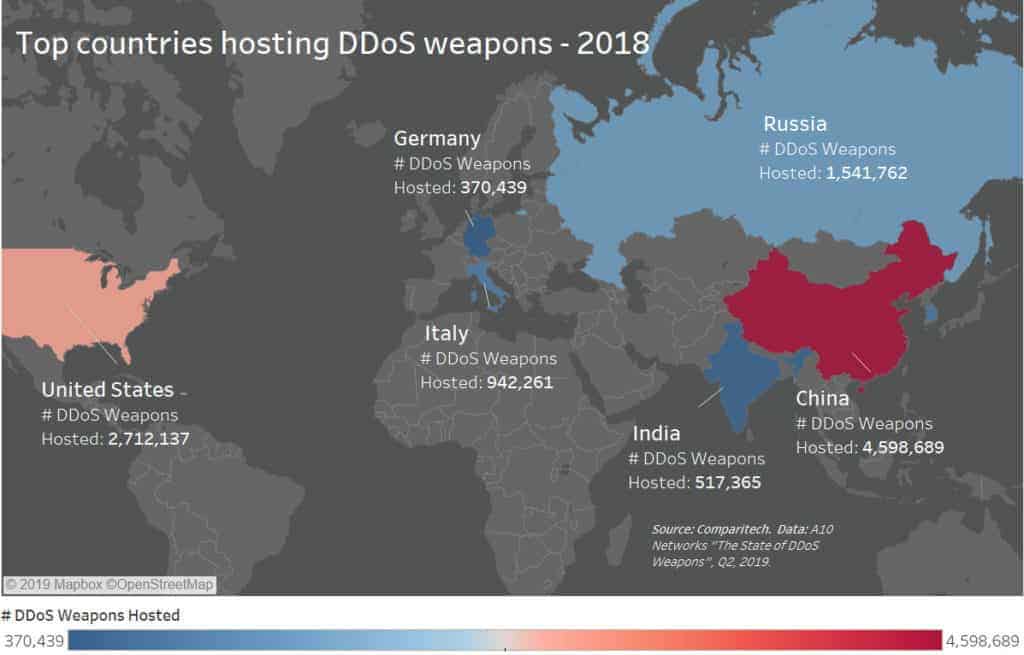 The security news world went into a frenzy in 2018 after the largest DDoS attack record was broken not just once, but twice in less than one week. The second-largest DDoS attack on record occurred in March 2018 against Github, with a registered 1.3 Terabytes per second (TB/s) of data sent toward GitHub’s servers. The site effectively mitigated the attack.

Amazon also reported suffering the largest DDoS attack on record. The company successfully managed to mitigate more than 2 Tbps of data, a feat that would be all but impossible for almost any smaller business.

18. DDoS attacks are getting more expensive for victims

Over 75 percent of businesses surveyed by Corero believe a loss of customer confidence is the worst result from DDoS attacks. That confidence loss can lead customers to flee to competitors, making the overall financial impact completely difficult to determine.

The number of websites impacted by DDoS attacks is on the rise. As “DDoS-for-hire” marketplaces proliferate, it’s now easier than ever for just about anyone to pay cybercriminals to disrupt a website’s operations.

Digging through DDoS facts might require brushing up on a few key terms. Distributed denial-of-service attacks are highly technical, and you may encounter some unfamiliar terminology while reviewing the latest stats.