How to get a Norwegian IP address in under 5 minutes

Do you want to access Norwegian websites and services abroad? If so, a VPN is what you’re looking for. We’ll show you how to get an IP address for Norway, how to stream geo-restricted Norwegian TV shows and movies abroad, and the best VPNs to consider.
Mark Gill TECH JOURNALIST, VPN AND PRIVACY SPECIALIST 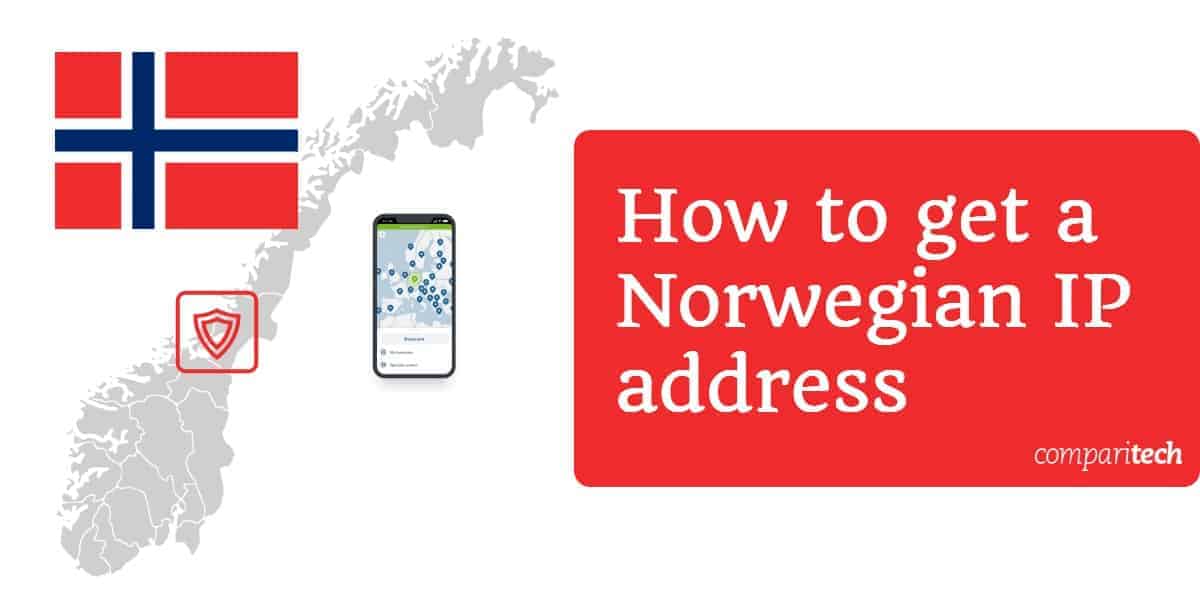 A VPN or Virtual Private Network may sound a little daunting but it’s actually quite simple. When you use a VPN, you connect to a server (in this case a server in Norway). In doing so, you’re effectively hiding your true IP address and location. The VPN encrypts your data and routes it through the server, providing you with a new Norwegian IP address. Thus you can browse as if in Norway, unrestricted. While we’ll explore the best VPNs to get an IP address for Norway in detail, here’s a brief summary list of our best VPNs for an IP in Norway:

Best VPNs for an IP in Norway

How to get a Norwegian IP address

You can get an IP address for Norway or almost any other country.

It’s quick and easy to do and the process is always the same:

TIP: HOW TO GET A GREAT PAID VPN FOR FREE:
We’re aware that many users don’t need access to a VPN for a long duration. If you’re on your annual vacation and need a VPN service for less than a month, we recommend that you take advantage of ExpressVPN’s 30-day money-back guarantee. You do need to pay upfront initially but ExpressVPN offers a ‘no-questions-asked’ refund if canceled within the first 30 days. We haven’t heard of any instances where this commitment was not adhered to, so it’s evidently risk-free. This offer is still available whether or not you’re a holidaymaker.

What’s the best VPN to get an IP address for Norway?

There is a wide range of factors to take into account when considering the best VPN to get an IP address for Norway. These include the number of servers available, the speed and reliability of connections, and the level of security offered.

We’ve explored the many VPNs on the market with servers in Norway and selected those that provide the following:

ExpressVPN is a fast and secure VPN for Norway. In fact, it’s a great VPN service for just about anywhere. That’s because ExpressVPN has over 2,000 servers in 94 countries which means you’ll be able to unblock geo-restricted content from all around the world. One of ExpressVPN’s major selling points is that it works very well in unblocking streaming services such as Netflix and Amazon Prime Video. Indeed, its fast servers, unlimited bandwidth and no throttling make it ideal for streaming your favourite movies and TV shows.

Another reason we recommend ExpressVPN for getting an IP address for Norway is its user-friendly apps. The browser extensions are a nice touch too, adding to the level of convenience. Unlike some VPNs, ExpressVPN offers apps for Linux and routers while smart TVs and games consoles are supported via ExpressVPN’s MediaStreamer smart DNS proxy. If you require any help with these, ExpressVPN offers arguably the best 24/7 live chat support we’ve found in any VPN.

Whether you’re in Norway or abroad, your online security is of the utmost importance. ExpressVPN secures your data with 256-bit AES encryption and offers you protection from DNS leaks. A kill switch feature cuts your device’s traffic should the VPN connection drop, preventing your data from being exposed. Based in the British Virgin Islands, it’s outside the watchful gaze of the Five Eyes intelligence alliance and keeps no identifying logs of its users. All in all, ExpressVPN is a highly secure VPN that is trusted by many.

You can download ExpressVPN on Windows, Mac, Android, iOS, Linux and routers. Browser extensions are available for Chrome and Firefox.

BEST VPN FOR NORWAY:ExpressVPN is our top recommendation for an IP address for Norway. It’s fast, highly secure and unblocks most geo-restricted content including Netflix, HBO Nordic and Viaplay. Try it risk-free with the 30-day money-back guarantee.

NordVPN has 68 servers in Norway and around 5,200 worldwide. Such an abundance of servers makes unblocking geo-restricted content simple. The fast speeds and unlimited bandwidth offered by NordVPN mean you can stream Norwegian TV shows and sports events with no buffering. What’s more, you can use a single NordVPN account to connect up to 6 devices. The NordVPN apps are responsive and make connecting to a server and adjusting your preferences extremely quick and easy.

Packed with security features, NordVPN is one of the safest VPNs you can use. Users seeking even greater online protection can connect to specialty servers that include obfuscated servers, double VPN and Onion over VPN. Of course, NordVPN also offers 256-bit AES encryption, DNS leak protection, and a kill switch. Headquartered in Panama, NordVPN has a strict no logs policy, protecting your private information.

NordVPN apps are available for Windows, Mac, Linux, Android, iOS and Android TV while browser extensions are offered for Chrome and Firefox.

CyberGhost is a VPN service that offers a number of advantages if you want to get an IP address for Norway. In particular, CyberGhost has more than 5,700 servers around the world, 30 of which are in Norway. In our testing, we’ve found this to be a fast VPN. Offering unlimited bandwidth and traffic, CyberGhost lets you stream TV shows and movies in 1080p HD without the throttling that some ISPs impose. The apps are easy for beginners to use and it’s possible to toggle various options including an ad-blocker.

This is a good value VPN that allows simultaneous connections on up to 7 devices. What’s more, CyberGhost includes a 45-day money-back guarantee – most VPNs only offer up to 30 days. When it comes to security, CyberGhost is another VPN well worth considering. It uses 256-bit AES encryption to protect your data. It also includes DNS leak protection, a kill switch and a strict no logs policy so your personal information stays private.

You can use CyberGhost on desktop (Windows, Mac and Linux), mobile (Android and iOS) as well as Amazon Fire TV and Fire Stick. A Chrome browser extension is also available. Routers require manual configuration.

GOOD FOR BEGINNERS:CyberGhost has thousands of fast, reliable servers. It can be used on up to 7 devices at once and has a no logs policy. Includes a 45-day money-back guarantee.

IPVanish has 10 servers in Norway at the time of writing and over 1,100 worldwide. This is a VPN service that offers excellent value and you can use it on up to 10 devices simultaneously – most VPNs allow three to five at most. Having tested IPVanish extensively, we can say that it’s a fast and reliable VPN service. Unlimited bandwidth lets you stream in high quality without the annoying interruptions of buffering and lag.

The IPVanish apps are simple enough to use, and this makes finding and connecting to a server quick and easy. However, there’s always the option of contacting the 24/7 live chat support should you encounter any problems. We found them to be fast and helpful in their responses to our queries. You can have peace of mind when using IPVanish, which uses 256-bit AES encryption, DNS leak protection and a kill switch to enhance your online security. There’s also a strict zero-logs policy.

IPVanish apps are available for the following: Windows, Mac, Android, iOS and Fire TV. Manual configuration is required for Linux and routers.

PERFECT FOR FAMILIES:IPVanish can be used on up to 10 devices simultaneously. It’s fast and reliable for streaming and is secured with strong encryption. 7-day money-back guarantee.

PrivateVPN is one of the best VPNs for streaming Norwegian TV content thanks to the very fast servers on offer. While it has a smaller network of servers, these are spread across 59 countries (including Norway), allowing you to access plenty of geo-restricted content. This includes the likes of Netflix and Amazon Prime Video, both of which you’ll be able to watch without buffering or lag. You’ll be able to use PrivateVPN on desktop and mobile and even connect up to six devices at a time.

While you’re unlikely to encounter too many issues when using PrivateVPN, live customer support is available. The apps are user-friendly and ideal for beginners. PrivateVPN uses 256-bit AES encryption and offers DNS leak protection. There’s also a kill switch and a zero data logging policy, making it a secure VPN.

You can use PrivateVPN’s native apps available for Windows, Mac, Android and iOS. Linux and routers require manual setup.

FAST STREAMING:PrivateVPN has fast servers for streaming Netflix. It unblocks most geo-restricted content and has a high level of security. 30-day money-back guarantee.

Are VPNs legal in Norway?

Yes, VPNs are legal in Norway. If you’re in Norway, you can legally use a VPN to access the internet with no restrictions.

Norway’s internet service providers (ISPs) have blocked major file-sharing sites such as The Pirate Bay since 2015. That’s because torrenting is illegal in Norway due to the strict anti-piracy laws in place.

Why do I need an IP address for Norway?

Norway is a country with little to no internet censorship. Described in 2018 by Freedom House as “one of the most robust democracies in the world”, Norwegian citizens can access most websites and services without any problems. Understandably, ISPs in Norway have a DNS filter that blocks websites known to host child pornography.

Regardless of the high level of freedom afforded to those using the internet in Norway, a VPN is still highly recommended. If you’re located in Norway, the best VPNs for Norway allow you to unblock geo-restricted sites and services from other countries. No matter where you are, a VPN serves to protect your online privacy, preventing your ISP and snoopers from accessing your data.

How can I watch Norwegian TV abroad with a VPN?

If you’re outside Norway and want to watch Norwegian TV shows and movies, connecting to a VPN server in Norway will do the trick. This will provide you with an IP address for Norway. Should you find that content is still blocked, try clearing the cookies of your browser. Alternatively, try connecting to another Norwegian server or contact your VPN’s customer support.

With a Norwegian IP address, you’ll be able to watch content from Norwegian TV channels such as NRK1, TV2 Sumo, Viafree.no and TVNorge. You’ll also have the option of unblocking popular streaming services such as Netflix, BBC iPlayer, Viaplay and HBO Nordic.

Can I use a free VPN to get an IP address for Norway?

While you can use a free VPN to get an IP address for Norway, we don’t recommend it. First of all, if you’re planning on streaming, free VPNs aren’t ideal. They tend to be slow due to the high number of users and lack of servers. Thus you’ll likely encounter a lot of buffering and lag while trying to watch TV shows. What’s more, most free VPNs aren’t able to unblock streaming services such as Netflix, which blocks most VPNs.

Another area in which free VPNs are often found lacking is security. A VPN should allow you to access geo-restricted content while keeping you safe online. Unfortunately, many free VPNs lack important security features such as 256-bit AES encryption and a kill switch. What’s worse, some free VPNs actually log your information and sell it to third parties – including some of those that claim to have a no logs policy. Free VPNs just aren’t worth it.