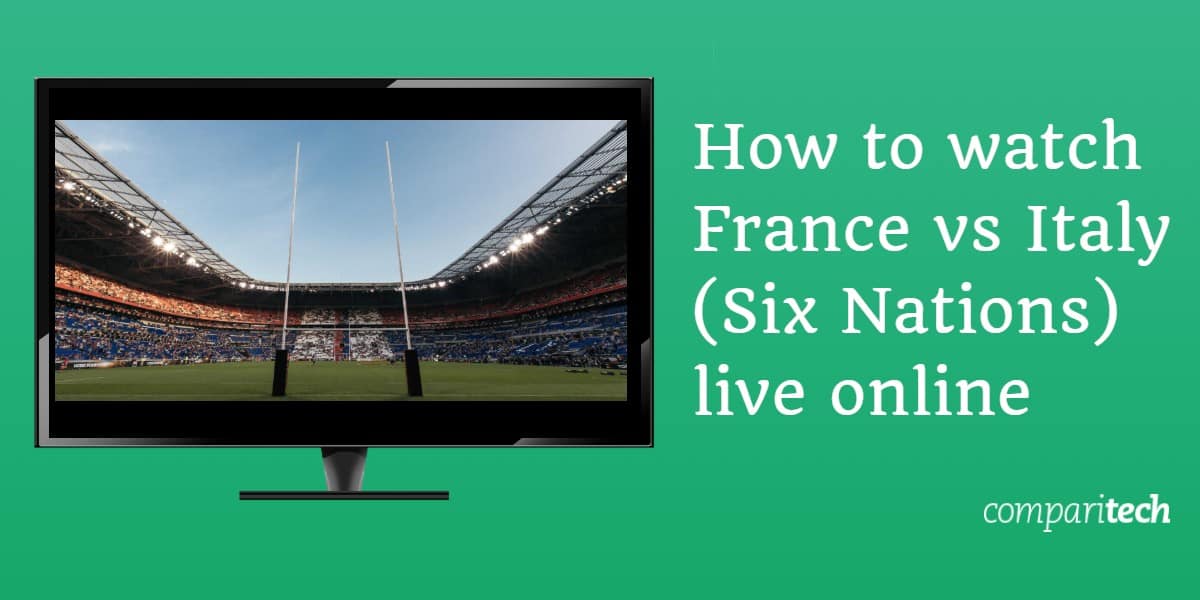 The 2020 Six Nations tournament will begin on February 1 and will run until March 14. The France vs Italy match, on the other hand, won’t be until Sunday, February 9, at 3 PM GMT (4 PM CET / 10 AM EST). As this is a knockout fixture, everything is to play for and fans can expect an extremely close contest. Read on to find out how to live stream Italy vs France online from abroad.

It’s important to note that we’re only recommending official Six Nations broadcasters. Due to the popularity of this tournament, unofficial streams are almost inevitable. These often have laggy, low-resolution video, though, so we advise against using them. Additionally, third-party streams are often taken offline for copyright violation. With various ways to watch Italy vs France for free internationally, there’s really no need to use shady, unreliable sources.

The Six Nations will only be available online via region-locked streaming services. If you’re currently abroad (on vacation, for instance) and looking to access your usual services, you’ll have to connect to a VPN.

Geo-restricted services tend to decipher the user’s location from their IP address. However, when you connect to a VPN, these services can only see the IP address of the server you’re using. This means that, for instance, if you use an American server, you’ll be able to access US-based sites and services from abroad. We’ve put together a quick guide to streaming the Six Nations from anywhere.

Six Nations fixtures will air live. To minimize the risk of you missing part of a match due to unexpected technical problems, we recommend taking a few minutes to make sure your VPN works properly ahead of time. The top VPN providers offer 24/7 support so you should still have plenty of time to get help with any issues.

Britain’s coverage is slightly fragmented, which is understandable given that it accounts for three of the eponymous six nations. S4C will be showing every game Wales plays at home, free of charge, but only Welsh commentary will be available. ITV will let you watch every English, Irish, and Italian home game live or on-demand via ITV Hub. Finally, all other fixtures, including France vs Italy, will be available on BBC iPlayer.

All of the services above are free to use, although whichever platform you use, you will have to create an account. During this process, you’ll be asked for a postal code but any valid UK postal code will work. Additionally, you should note that British law requires you to have a TV license to use BBC iPlayer or to watch live TV broadcasts on any other online platform.

BBC iPlayer, ITV Hub, and S4C are all region-locked and only available from within the UK. Despite this, you can access them from abroad using a VPN. Don’t have one yet? No need to panic: ExpressVPN offers a risk-free 30-day money-back guarantee, and if you’re not satisfied, you can simply cancel to receive a full refund.

Where else can I live stream France vs Italy online?

Luckily, there are plenty of ways to stream France vs Italy from abroad. Better still, many of these options are free to watch. Below, we’ll explain which networks are showing the Six Nations 2020 tournament where you are:

The France vs Italy game (and every other Six Nations match) will be shown live, for free on France 2. Users won’t even have to create an account first, although it’s worth noting that this platform only offers French-language coverage. Further, as it’s region-locked, you will need a French IP address. To get one from abroad, just connect to one of your VPN’s French servers.

In Italy, the Six Nations will be broadcast exclusively on DMAX. This service is completely free to use, and you don’t have to create an account before you can watch, but it only offers Italian-language content. Subtitles may be available in other languages, but this hasn’t been confirmed as yet.

DMAX is geo-restricted, so you’ll have to either be in Italy or connected to an Italian VPN server to watch anything.

The 2020 Six Nations will air on Virgin One in Ireland. There’s no need to sign up or pay anything to watch, but it’s worth noting that this service doesn’t offer subtitle support. Additionally, as Virgin Player is geo-restricted, you’ll have to use a VPN to watch from outside of Ireland.

Unfortunately, there’s no way for American rugby fans to watch the 2020 Six Nations for free. This doesn’t mean that you’re locked out, though; just that you’ll have to pay $79.99 USD for a Rugby pass on NBC Sports Gold. On the plus side, this lets you stream the Six Nations, the Heineken Champions Cup, and the European Challenge Cup, among other events.

NBC Sports Gold is only available in the US. If you’re currently traveling abroad, you’ll need a VPN to log in and watch anything.

How does the Six Nations tournament work?

In recent years, the Six Nations format has changed to bring it more in-line with other rugby tournaments. Simply, six countries compete, each playing all of the others once, and points are assigned based on how well they performed. For instance, a team gains four points for winning a match, plus a bonus point if they score more than four tries. Also, if a team achieves a Grand Slam (beating every other squad), it’s given three extra points to guarantee that it wins overall.

Let’s get this out of the way: France is the favorite this time around, and it’s easy to see why. The French squad has won the Six Nations five times, while Italy is still looking for its first victory. Further, France is ranked seventh in the world, and Italy is in twelfth place. Finally, the French national rugby team has an astounding 92.9 percent win rate against Italy, having lost just three of their 42 games.

It’s easy to forget that these are both world-class teams, though, and rugby is a sport where anything can happen. Perhaps the Italian squad will surprise everyone and win by a huge margin; after all, there aren’t many better ways to make a statement than by handily beating your long-term rivals.