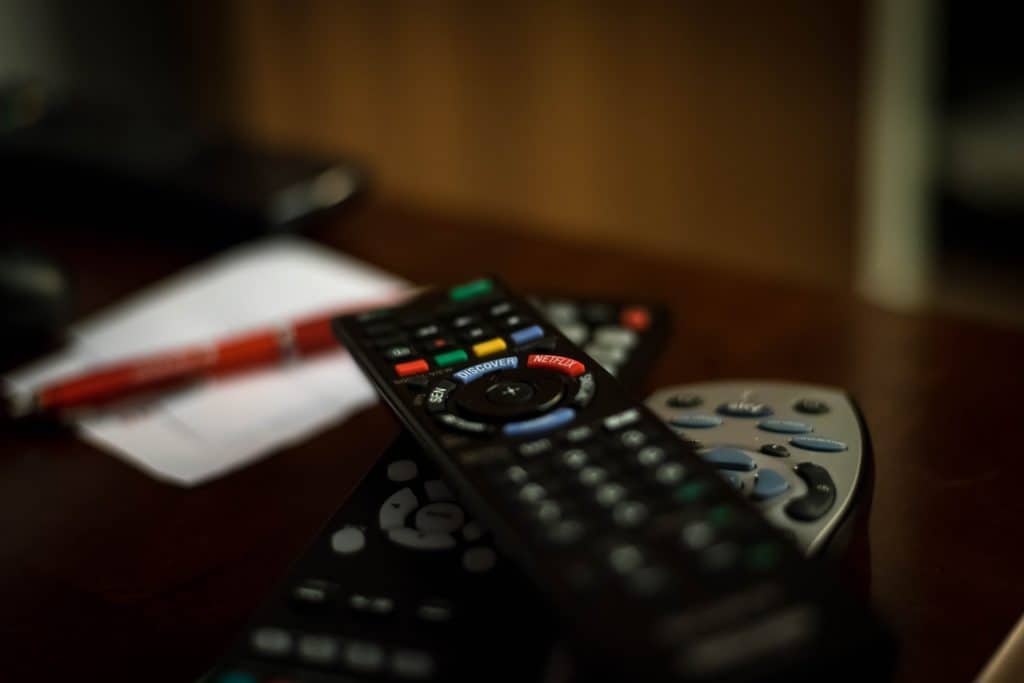 Looking to better integrate Kodi into your home theater setup? We’ve scoured the market and researched five of the best Kodi remotes so you don’t have to.

Kodi is software that makes it very easy to create your own media center on devices like the Amazon Fire TV and Apple TV. However, using a keyboard and mouse can be cumbersome when your Kodi device is across the room. Luckily, there are many high-quality remote controls that can be used with Kodi. These allow you to control your device in exactly the same way as you would your TV or cable box.

As Kodi has become more popular, the market has seen an influx of low-quality remote controls. Researching each of these individually takes a lot of time, so to help out we’ve selected five of the best Kodi remote controls of 2018 and 2019 and highlighted the strengths and weaknesses of each.

We strongly advise our readers to use a virtual private network (VPN) with Kodi. These can help prevent Man-in-the-Middle attacks and stop your ISP from using your browsing habits to justify connection throttling. VPNs also allow you to bypass geographic content locking by connecting to a server in the right location. We recommend IPVanish. It keeps no logs of your activities, has minimal impact on your network speeds, and can be installed on the most popular platforms including the Amazon Firestick.

READER DEAL: SAVE 60% ON IPVANISH HERE, our top rated VPN for Kodi

Before we get to the reviews themselves, we’ll explain how we judged each product. Usually, we personally test each product we review. However, the range of Kodi remote controls available means that in this case, it just wasn’t feasible. Instead, we’ve accounted for several different criteria and used them to form the basis of our Kodi remote reviews.

It’s worth mentioning that Kodi is best experienced with a combination of a remote control and keyboard. However, since Kodi can be used exclusively with a keyboard, you might want to think about investing in one of these before moving on to a remote control. 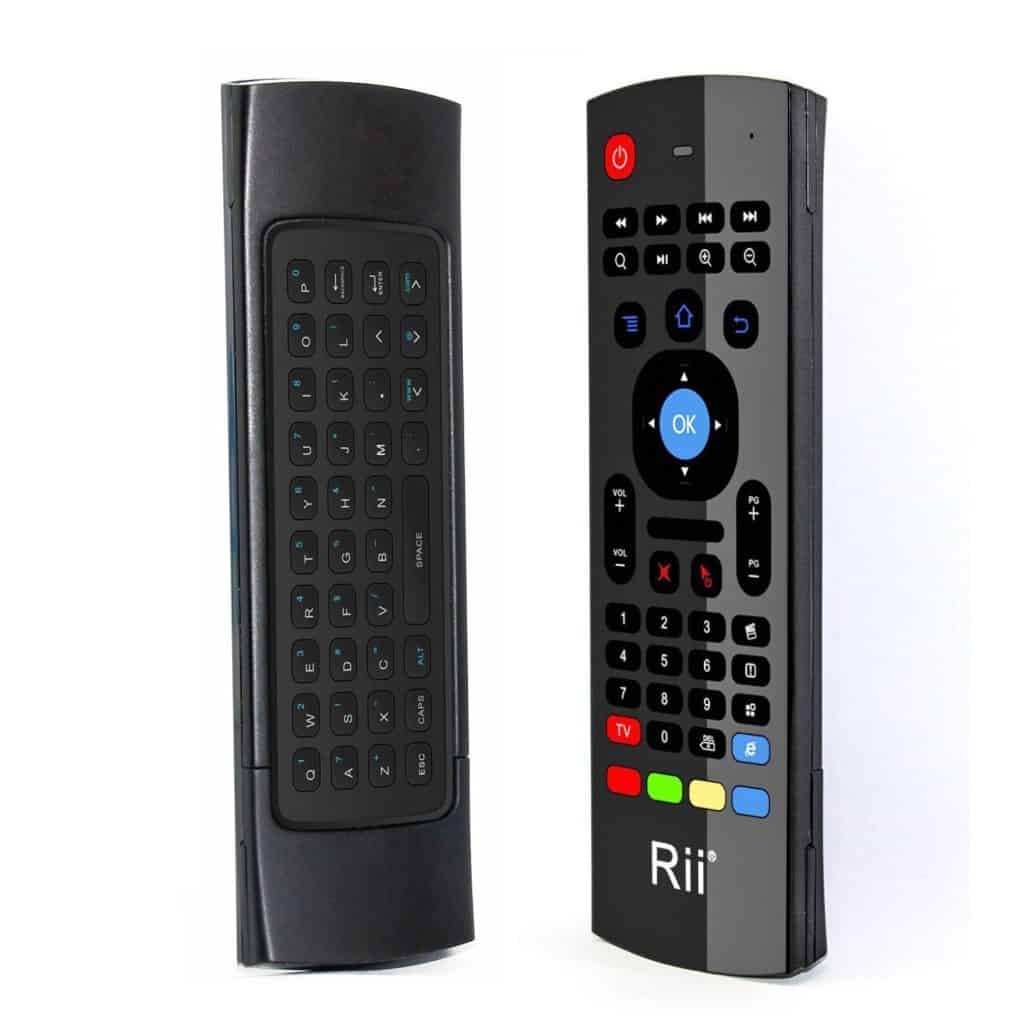 At first glance, the Rii MX3 Pro looks just like a regular TV remote but its underside hides a full QWERTY keyboard. This gives the MX3 the ability to control all aspects of Kodi from navigation to text entry.

This remote control can be used to operate any TV using infrared signals, but most Kodi devices don’t have the right receiver for this. It isn’t a problem, though, because the MX3 also comes with a 2.4GHz dongle that can be plugged into any device with a USB port including Raspberry Pi, Roku, and traditional desktop PCs.

The MX3 also includes air mouse functionality. This allows the user to control the on-screen cursor by physically moving the remote around. There’s even a button that allows you to left-click, although there’s no right-click option available.

For such an advanced product, it’s pretty affordable. It currently costs $11.99 from Amazon, where it has over 300 reviews and an overall rating of 3.5/5. Some buyers cite the lack of backlit keys as the reason for their low rating, so this is something to be aware of before purchase.

There are a few reasons for this low price, though: it uses AAA batteries instead of a rechargeable internal one, for instance. There’s also no Bluetooth support, making it unsuitable for use with the Amazon Firestick.

The only real issue with this product is its lack of a keyboard-locking button. Because the bezel on the underside is so thin, it’s possible to accidentally hit the keyboard while using the buttons on top. The keyboard is slightly recessed to help prevent this, but it will likely take some getting used to.

The Inteset INT-422 is a very popular remote control, for good reason. It can be paired with almost any device and comes preconfigured to work with Apple TV, Xbox One, and Roku straight out of the box. It should be noted, though, that this device does not come with an IR receiver. You’ll need to purchase a receiver separately for it to function with select devices, such as Raspberry Pi and PC.

This remote allows the user to create macros that run up to 32 commands at the touch of a button. For example, you can have the INT-422 switch to the correct TV source, increase the volume, and adjust the brightness automatically.

This device is very popular. It currently has over 1200 reviews on Amazon and a rating of 4.4/5 stars. The main complaint seems to be with the initial setup process although this is very straightforward unless you have an uncommon or older device.

The INT-422 comes with several functions designed to enhance your viewing experience. First, all of the keys are backlit. The key benefits to this is obvious: you can more easily change settings when the lights are out. You can also choose to lock the volume and channel buttons to prevent accidentally changing these mid-movie.

There are a few very minor issues with this remote control. Namely, there are so many buttons that the remote itself seems cluttered. You may have difficulty finding the key you’re looking for by touch alone so any changes you’d like to make would require looking away from the screen. Also, this product uses AA batteries, which, while a small problem, is one we didn’t expect to see in a $25 remote. 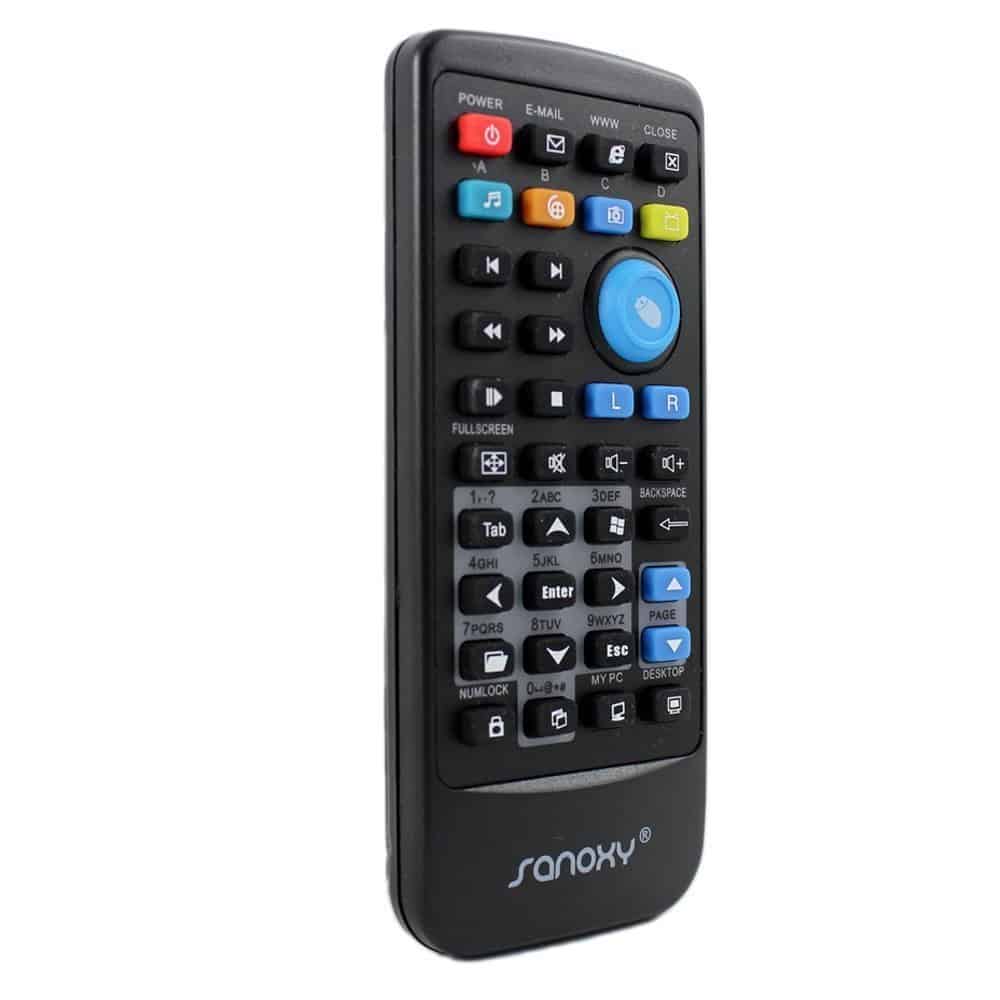 The SANOXY PC-RC is an ultra-simple and small remote control for people who just want basic navigation functionality for their Kodi device. It comes with standard media playback buttons, arrow keys, and even a mouse button that works in a similar way to a joystick.

It’s worth noting that there are certain keys that don’t work in Kodi by default, including the email and internet explorer buttons. However, these can be remapped to other functions if you’d like and the majority of buttons work as expected without any further configuration. Additionally, The button layout is fairly straightforward with keys grouped by category. This makes the PC-RC easy to use even in total darkness.

This product costs $11.99 and has hundreds of favorable reviews online. Its current Amazon rating is 3.5/5, however, in part because the remote has to be pointed directly at the receiver. Assuming you have a clear line of sight, though, this shouldn’t be a huge problem.

We’d have liked to see it offer Bluetooth support since it costs the same as the more advanced Rii MX3 Pro, but since the PC-RC is designed with simplicity in mind, it’s hard to complain too much. Also, unlike with some other products on the market, the PC-RC comes with a USB infrared receiver so you can use it immediately without having to spend any extra money. 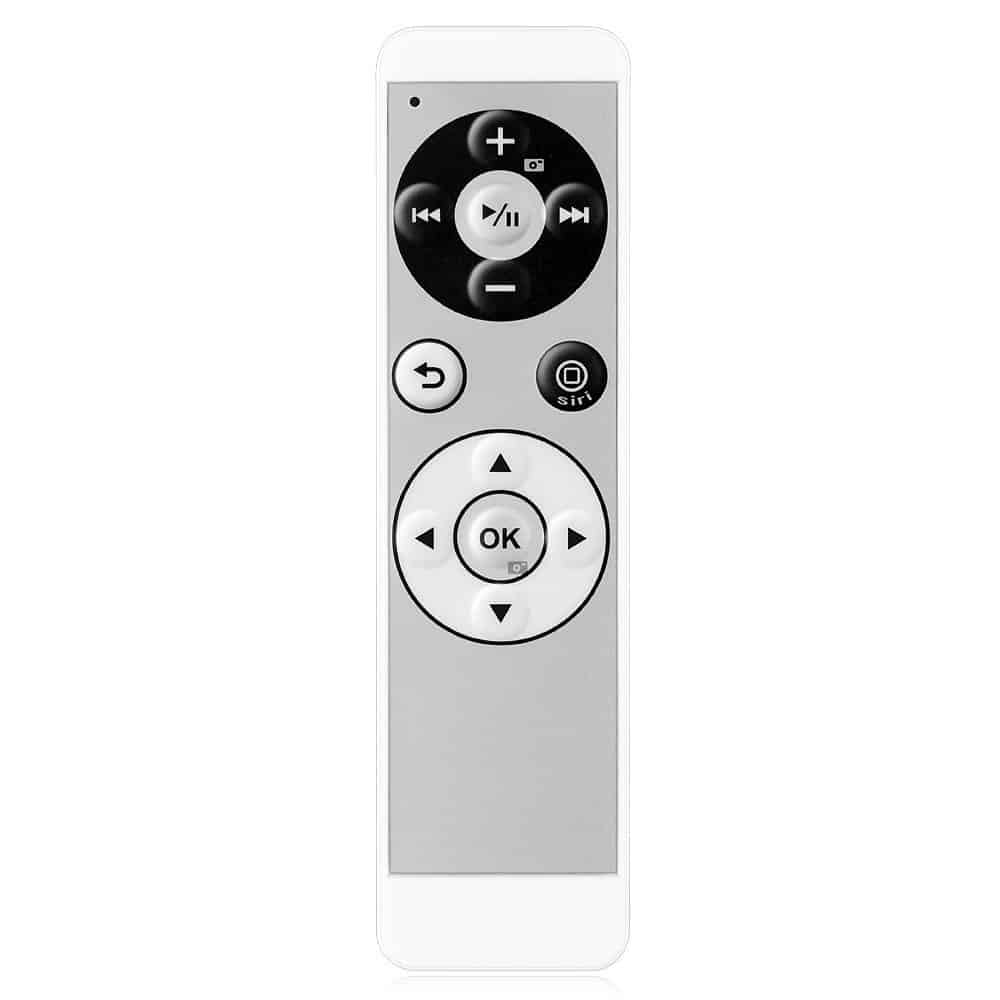 The previous remotes have had one thing in common: they’ve all relied on wireless dongles to work. The Century Accessory BT Remote uses Bluetooth instead, allowing it to connect to devices without USB ports such as phones, tablets, and the Amazon Firestick.

The Bluetooth functionality does drive the price up, however. This remote costs just under $20 and offers a very minimal amount of control. The standard media playback buttons are included, as are basic navigation keys. That said, there is no way to control the mouse or enter text, and the Siri button only works on Apple platforms.

This device isn’t as well-known as some of the others we’ve seen. At the time of writing it has 67 Amazon reviews and an overall rating of 3.6/5. The main complaint seems to be that the buttons are too “clicky”, and that the overall construction could be improved. It is one of the simplest Bluetooth remotes available, but we would have liked to see it built a little sturdier.

Unlike the other devices we’ve covered, this remote uses a lithium watch battery. It does, however, offer around 70 hours of usage before the battery needs replaced. There is a sleep mode to help prolong battery life, and an LED lights up when the battery begins to run low.

Pairing is done by pressing a button on the underside of the remote. This is located slightly above where the user’s fingers would rest so you don’t find yourself unknowingly trying to connect with a different device mid-movie. 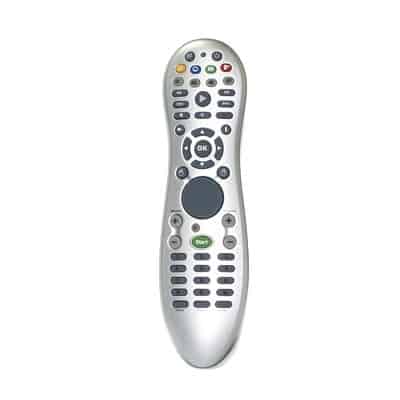 Lastly, we have the Ortek VRC-1100, an infrared remote that costs a little over $14. This product manages to limit the number of buttons it has while providing a good degree of versatility for Kodi users.

It includes all of the media control buttons you’d expect it to but also has a record button. This is a feature missing from most infrared remotes, so it’s sure to be invaluable to people with Kodi-based DVR systems.

Another interesting thing about this remote is the way it handles mouse movement. Instead of using gestures or a joystick, the VRC-1100 has a circular area in the center that works like a miniature trackpad. It can be a bit temperamental but generally works well enough. There are always the arrow buttons if you need another option.

There really isn’t much to complain about here. This remote has over 1,000 reviews on Amazon and an overall rating of 4.5/5 so most people who’ve bought it are pretty satisfied. The only problem we can see with the VRC-1100 is that the IR receiver and remote itself don’t look like part of the same set; one is faux wood and the other has a modern, silver design. It may not be the most aesthetically pleasing remote but as far as functionality goes, this device is one of the best available.

There are many high-quality Kodi remote controls on the market. Ultimately, you’ll have to consider how you use Kodi before you can decide which is best for your needs. Once you’ve made your choice, though, you’ll be able to experience everything Kodi has to offer from the comfort of your couch.

If you’re interested in finding new content, you might want to check out our guides to the best addons for movies, sports, live TV, and anime. Don’t worry if you run into any problems with Kodi, either; we have a troubleshooting article that will walk you through resolving any issues one step at a time.