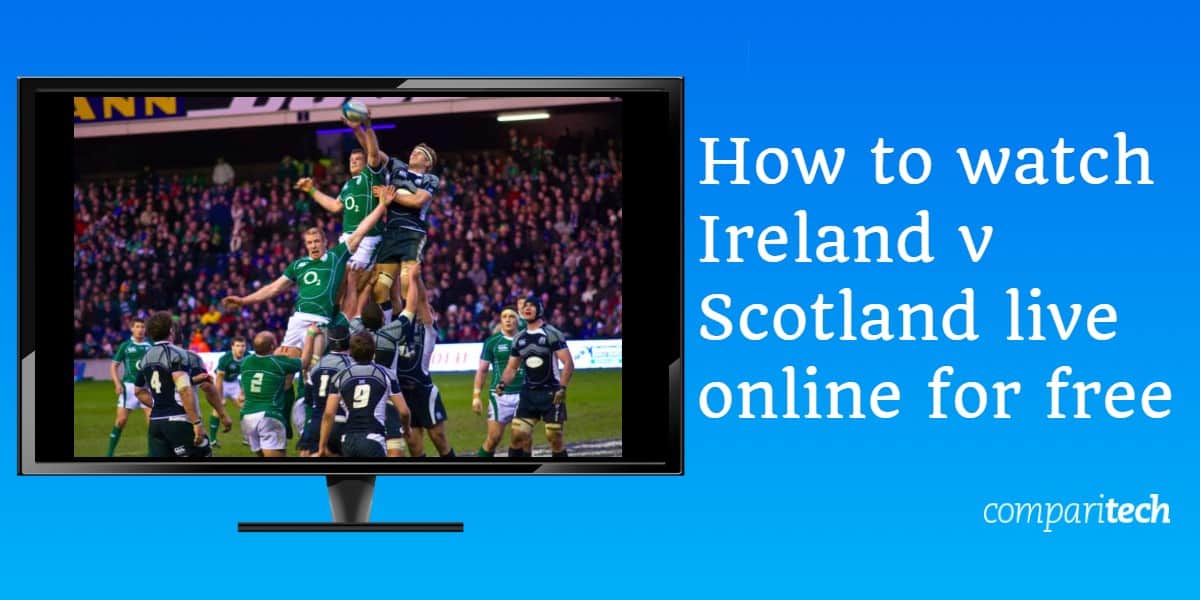 The Ireland v Scotland Rugby World Cup 2019 match is to take place on September 22 at 8:45 AM BST (16:45 JST local time) at International Stadium Yokohama in Yokohama, Japan. Below, we’ll explain how you can live stream Ireland v Scotland online for free. Additionally, we’ll let you know how you can watch from abroad with the help of a Virtual Private Network (VPN).

This article will only cover official sources for watching Ireland v Scotland. There will likely be many unlicensed streams but these can be taken down during the match for copyright infringement. Even if an unofficial live stream stays up for the duration of the game, chances are that the low-resolution image and frequent buffering and lag will result in you missing out on key action. The good news is that you don’t need to find an unauthorized source for Ireland v Scotland because you can watch it live online for free.

You can live stream Ireland v Scotland on ITV Hub and RTÉ Player for free. If you’d like to watch the match from abroad, you’ll need a VPN as both platforms are region-locked.

Not sure where to get started? We’ll show you how to watch Ireland v Scotland live online for free. We’ve set out what you need to do in a series of simple steps.

If ITV Hub content is still blocked, we recommend you clear your browser’s cache and cookies. That way, ITV Hub forgets your previous IP address and location and accepts that of the VPN. It may also be worth connecting to another UK server in case the IP address you’re using has been blacklisted.

As with the 2011 and 2015 Rugby World Cups, ITV holds the UK broadcasting rights for the Rugby World Cup 2019. It will be airing all 48 Rugby matches, including Ireland v Scotland. This means that rugby fans in the UK can watch live on TV for free.

There’s also the option to watch the match online via ITV Hub. This requires an ITV account but these are free and only takes a few seconds to create. A UK IP address is also required as ITV’s online content is geo-blocked. This means you’ll need a VPN in order to watch the match on ITV from abroad. Fortunately, ExpressVPN offers a 30-day money-back guarantee so you can try it out on ITV Hub risk-free.

Where else can I watch Ireland v Scotland live online?

ITV isn’t the only place you can watch Ireland v Scotland. Here’s a list of some of the different countries in which this 2019 Rugby World Cup match will be broadcast (if we don’t mention your country below, take a look at the list of broadcasters available via the official Rugby World Cup website):

RTÉ will be broadcasting all of Ireland’s Rugby World Cup matches online free (as well as the knockout stages). The games will be available to watch live on TV (RTÉ2) and online via RTÉ Player. One advantage of watching via RTÉ Player is that you don’t need to create an account in order to watch online. However, you’ll need a VPN with servers in Ireland if you’re planning on watching abroad.

If you’re in Ireland and want to watch more than just Ireland’s games, it’s worth keeping in mind that Eir Sport is airing all 48 Rugby World Cup 2019 games live on TV and online via the Eir Sport app. Unfortunately, this isn’t a free option. It requires an Eir Sport broadband subscription or the purchase of a monthly (€29.99) or annual (€299) Eir Sport subscription if you’re a Sky TV customer.

Ireland v Scotland isn’t available on US TV for free. However, it will be available on cable TV. NBC will be showing all 48 games of the 2019 Rugby World Cup online via NBC Sports Gold. While some of the games will be broadcast on TV on NBCSN, this doesn’t include Ireland v Scotland. As such, the options are purchasing a Rugby World Cup Pass for access to all Rugby World Cup 2019 games ($199.99 USD) or purchasing the game individually for the price of $29.99. Regardless of the option you choose, a US IP address via a VPN is needed in order to watch NBC Sports Gold abroad.

Fox Sports has secured the broadcasting rights for the Rugby World Cup 2019 in Australia. All 48 games will be shown on its Fox Sports 503 (HD) and RWC 4K (4K) channels as well as online via Foxtel Go. This option requires a paid subscription for the price of $4.99 AUD per month or $49.99 annually.

While Network Ten holds the free-to-air rights, it will be broadcasting Australia’s games and not the Ireland v Scotland match. In the case of both Fox and Network Ten, an Australian IP address is required in order to watch abroad due to geographic restrictions in place.

Can I use a free VPN to watch Ireland v Scotland online?

The average free VPN is unable to unblock geo-restricted services such as ITV Hub, RTÉ Player, and NBC Sports Gold. That’s because free VPNs tend to have a small network of servers and a limited number of IP addresses which are quickly flagged and blacklisted. As if this wasn’t bad enough, free VPNs are slow with buffering and lag particularly commonplace when live streaming. This makes them an unreliable choice for watching Ireland v Scotland.

We also advise against the use of free VPNs because of their fundamental lack of security. A quality VPN encrypts your data and protects you from any leaks. What’s more, it should have a strict no-logs policy to protect your privacy. In contrast, few free VPNs offer such features. In fact, many actively track and sell your browsing data to the highest bidder. You may also find yourself spammed with ads or even have your device infected with malware.

What should I know about the Ireland v Scotland Rugby World Cup match?

The Rugby World Cup 2019 Ireland v Scotland game is a Pool A fixture. The two international teams have met a total of 135 times with Ireland winning 63 times and Scotland 67 (five matches have been draws). The most recent meeting between Ireland and Scotland was in February 2019 when Ireland won 13-22 in the 2019 Six Nations Championship.

Overall, Ireland are the favorites to win this Rugby World Cup match, having won 18 of the 24 matches that have taken place between the two teams since the turn of the century. Indeed, Ireland are ranked 1st in the world at present but their highest finish in Rugby World Cup history is the quarter-finals (1987, 1991, 1995, 2003, 2011, and 2015). Scotland are ranked 7th and reached the semi-finals in 1991.