How to watch Iran v Spain online for free 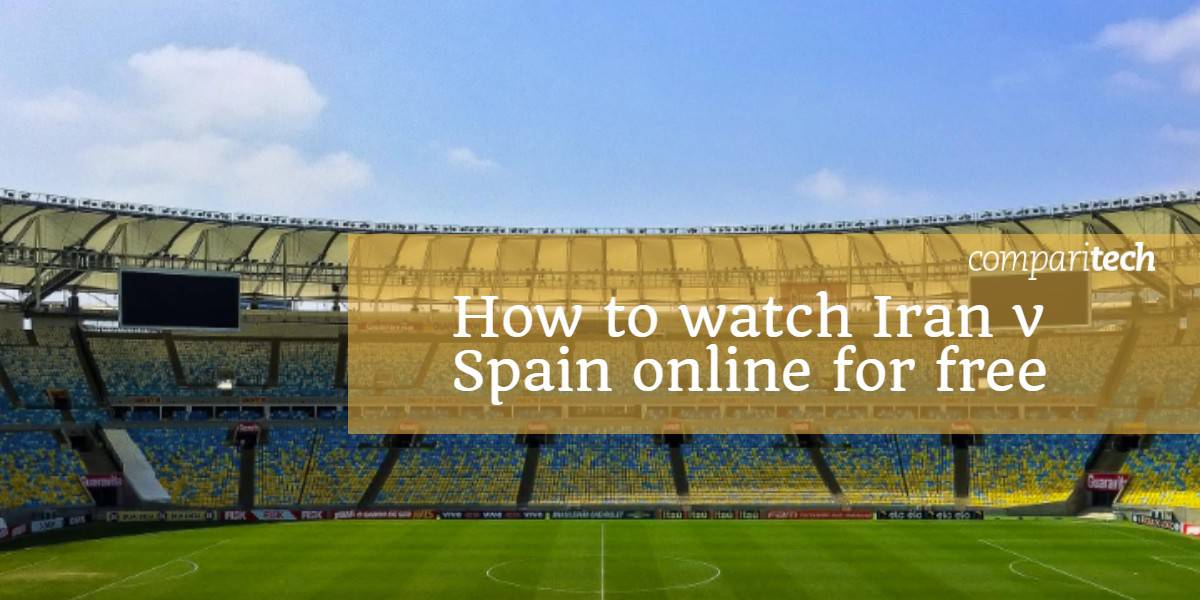 If you’re an Iran or Spain fan, or simply looking to watch as many World Cup 2018 games as possible, you might be wondering how you can watch the Iran v Spain game live for free online. Thankfully, it’s possible to watch all of the Russia World Cup games via a variety of sources and in multiple languages. To gain access to certain live streams and to watch every game in any language, you may need the use of a Virtual Private Network (VPN).

Some streams are geo-restricted but a VPN can mask your IP address and spoof your location, thus unblocking content. This means you can watch Iran v Spain in your desired language from the US, the UK, Canada, Australia, Germany, Spain, or anywhere else in the world.

All games are taking place in Russia with the Group B Iran v Spain match being played on June 20 at the Kazan Arena in Kazan, kicking off at 7PM BST (11AM PST/ 2PM EST). You don’t have to miss this or any other game simply due to content geo-restrictions.

In this post, we’ll explain how to watch Spain v Iran online and live stream any other game on all of your devices.

Various broadcasters across the globe have full or partial rights to the World Cup 2018 matches. Many streams will be in English, but broadcasters in certain parts of the world will provide commentary in other languages. For some of the major English-speaking countries, the following broadcasters have rights and will show games with English commentary:

For the Iran v Spain game, in particular, you may be looking for commentary in Spanish or Persian, or perhaps Catalan or Arabic. For Spanish-language streams, here are some of the main options:

Many other South American countries will also have streams with Spanish commentary available. Unfortunately, if you’re looking for Catalan commentary, there are no official streams offering commentary in this language.

For Persian-language broadcasts, you have one option:

beIN Sports will also be broadcasting World Cup games in Iran, and these streams will likely have Arabic commentary.

There are many other streams available worldwide in various languages, including free and paid options. We’ll go into more detail about how to watch for each region in the later sections.

While some streams are free, others will require some kind of payment. This might be in the form of a subscription to the actual streaming source or through another entity such as a cable provider. For example, many of the US and Canadian streams require that you sign in with credentials from a cable provider.

To watch World Cup matches for free, one of our best recommendations is through SBS’s The World Game website. This Australian site doesn’t require a subscription and is easily accessible to anyone with an Australian IP address.

Unfortunately, The World Game website is only showing a select number of games and the Iran v Spain isn’t one of them.

Given that US and Canadian streaming services require a paid subscription, your best bet for a free English commentary stream is to go with a UK service. ITV Hub will be showing the Iran v Spain game, and you can access it as long as you have a UK IP address — see instructions for using a VPN to spoof your location below.

For free Spanish streams, your best bet will be through Telecinco or Cuatro using a Spanish IP address. Again, if you’re outside of Spain, you’ll need a VPN to mask your location.

We recommend ExpressVPN as an all-around excellent VPN provider. It has a large network of servers spanning almost a hundred countries and is known for its ability to unblock streaming services. It can even bypass restrictions on platforms that are actively cracking down on VPN usage such as Netflix and BBC iPlayer.

It offers top-notch security and is very easy to set up and use. And if you run into any issues, you have 24/7 live chat customer support ready to jump in and help.

The sign-up process is fast and easy. Just choose your subscription plan (1 month, 6 months, or 12 months), and pay for the subscription. ExpressVPN offers a 30-day money-back guarantee, which will cover the majority of the World Cup schedule. Should you choose to keep the service afterward, you can, but you can easily cancel if you find the service isn’t to your liking without any penalty.

While ExpressVPN is our first recommendation, there are plenty of other great low-cost options out there, including NordVPN and CyberGhost.

How to watch the Iran v Spain game with a VPN

Once you’ve chosen a VPN, the steps to watching the game are simple

If you’re located in Spain while the game is on, or in another Spanish-speaking country, then you should have reasonably straightforward access to Spanish-commentary streams. In Spain, Mediaset Espana will be showing all games through Telecinco or Cuatro for free.

In the US, Spanish live streams will be available from Telemundo Deportes through NBC Sports.

If you’re in Mexico, Argentina, or many of the other Spanish-speaking South American countries, there should also be live Spanish-commentary streams available there too.

If you want to access one of these streaming services from outside the source region, then you can do so using a VPN.

If you’re in Iran, for a while, it did look to be ominous as to whether or not streams would be available. However, beIN sports recently announced it would be providing free live streams in Iran as well as many other countries.

Other games can be viewed for free through IRIB. These will be with Persian commentary while the beIN Sports streams will likely have Arabic commentary.

If you want to access either from outside Iran, this may pose an issue. With Iran being strict about the use of VPNs, VPN providers don’t maintain servers in the country. As such, you may need to look for a different streaming source.

In the UK, the BBC and ITV are sharing World Cup 2018 broadcasting rights, so that every game will be available on one channel or the other. The Iran v Spain game will be shown on ITV and online through ITV Hub.

Both services are free but require you to sign up for an account. For both BBC iPlayer and ITV Hub, a postal code is required, but it is not actually checked. Both services also stipulate that users should have a valid UK TV License. However, this doesn’t appear to be enforced and is based on an honor system, so watching either using a VPN can be done.

The BBC in particular has been cracking down on VPN usage, so ensure that your chosen provider does in fact unblock it before signing up. ExpressVPN reliably unblocks both BBC iPlayer and ITV Hub.

Coverage on both of these networks have English commentary.

The only official broadcasters in the US with rights to broadcast the Russia World Cup games are FOX Sports and Telemundo Deportes. The latter will provide Spanish commentary, so the only English-language option in the US is FOX Sport.

You can access this using credentials from certain other subscription services, including Sling TV, fuboTV, and DirecTV Now. Or you can purchase a FOX Sports soccer match pass for $19.99.

If you’re just traveling through the US, don’t have a cable subscription, and don’t want to shell out for a FOX Sports subscription, then there is a better option. You can simply use a VPN to spoof your location and access a free service from another country, such as the UK.

Canada has a few options when it comes to watching the FIFA World Cup 2018 games, although a cable subscription is required to access all of them. Select games will be shown on TSN and CTV with English commentary. Additionally, games will be aired on RDS with French commentary.

If you’re in Canada and don’t have a cable subscription, a VPN can help you access a free live stream outside of the country.

We mentioned The World Game website earlier and this is definitely a great option for streaming in Australia. However, this site is run by SBS which only has rights to 25 matches. For the others, you’ll need to look elsewhere.

Thankfully, Optus Sport is showing all of the matches. It requires an account but is offering a free 14-day trial, so you’ll be able to watch many of the games without paying a thing. A premium plan is just AUD 15 per month so that might be worth considering.

If you’re looking to watch games in a language other than English or Spanish, here’s where you can find some streams:

Bear in mind that many of these will require the use of a VPN if you are outside of the source region. When selecting a VPN, make sure that the provider offer servers in your desired region. Bear in mind many users will be connecting to those servers at similar times to watch the various World Cup matches. As such, ideally, there should be multiple servers in the desired location with plenty of available capacity. This will help ensure you’re able to watch through a seamless buffer-free stream.