How to watch France vs Australia (World Cup 2022) live online

Hoping to watch the World Cup match between France and Australia? We’ll let you know which networks are broadcasting Group D fixtures so you can stream France vs Australia live online.
Ian Garland Streaming, Kodi and VPN Expert 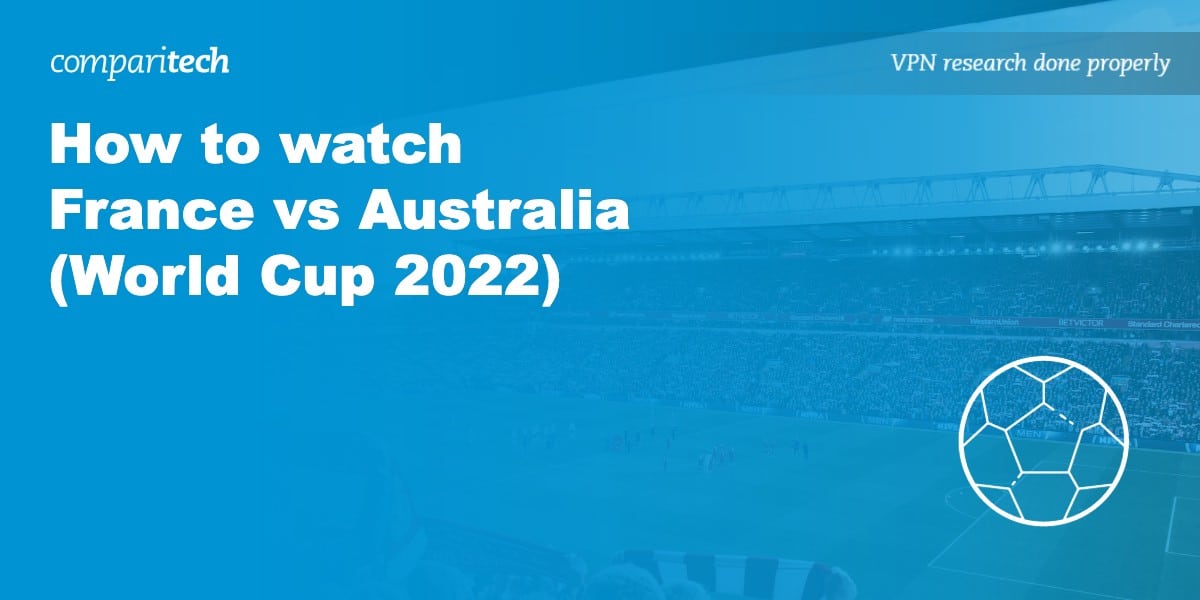 On November 22, fans will descend upon the Al-Janoub Stadium in Qatar for one of the most-anticipated games of the group stage: France vs Australia. Kickoff is scheduled for 19:00 GMT (20:00 CET / 15:00 ET / 05:00 AEST), so any Australian fans watching are in for a late night. Don’t worry, though: we’ll cover all of your options for streaming the game on-demand too, allowing you to catch up at a more reasonable time.

We’re only recommending official World Cup broadcasters below. That’s because in addition to violating copyright, third-party streams are notoriously unreliable, often dropping out at a crucial moment. The good news is that there are plenty of fully-legal, free-to-watch World Cup streams, so there’s really no point wasting time on an inferior broadcast.

The FIFA World Cup will only be shown on geo-blocked streaming services. If you’re traveling abroad, you’ll need a Virtual Private Network (VPN) to regain access to your usual channels.

How to stream France vs Australia online from abroad

VPNs reroute your traffic through a server in another country, which hides your true location. However, you can also use this feature to beat regional restrictions and keep using your favorite streaming services as you travel.

Here’s how to live stream the World Cup from anywhere in the world:

This match will be broadcast live, so it’s a good idea to make sure your VPN works with your chosen streaming service beforehand. After all, nobody wants to miss out due to last-minute technical issues. All of the providers above offer free 24/7 live chat, so getting help is quick and easy.

NordVPN offers a fully-featured risk-free 30-day trial if you sign up at this page. You can use the VPN rated #1 for live streaming the FIFA World Cup with no restrictions for a full month. As such, it’s perfect for fans hoping to follow their favorite squad’s matches while on vacation abroad.

How to watch France vs Australia online on US TV

FOX is showing every single fixture of this tournament, with 35 matches (including France vs Australia) airing on the FOX channel, and the other 29 exclusive to FS1. If you already get these channels as part of your cable plan, simply sign into the Fox Sports website or app to stream the World Cup live at no added cost.

Looking to watch the World Cup without cable? Not a problem! There are plenty of over-the-top options for streaming FOX, and we’ll cover them all below in order of price:

These services are all region-locked, meaning they won’t work outside of the US. However, you can connect to a US VPN server in order to regain access abroad. NordVPN comes with a 30-day money-back guarantee, allowing you to try it risk-free and claim a full refund if you’re in any way disappointed.

Where else can I watch France vs Australia online?

As you might expect, there are plenty of international broadcasters for the 2022 World Cup. Here are the networks showing France vs Australia in your country:

If you’re in the UK, you can watch the entire World Cup for free. Matches are split between BBC and ITV, with one half streaming online via BBC iPlayer and the other via ITV Hub. France vs Australia will be broadcast by the BBC, so simply visit BBC iPlayer and create an account ahead of time to make sure you’re ready to go on November 22.

You’ll also need a valid TV License to use this service. Note that while a license is only normally required for watching live broadcasts, BBC iPlayer is a special case, and requires a license even if you’re only watching on-demand content.

BBC iPlayer normally won’t work if you’re outside of the UK. That said, you can stream it while traveling by connecting to a British VPN server.

Watching the World Cup couldn’t be simpler if you’re in Australia. All 64 fixtures will be shown live on SBS. This platform is completely free to use, and will offer both live streams and on-demand replays. In other words, you don’t have to stay up until the early hours to watch France vs Australia; just get some sleep and catch up the morning after. Note that you will have to register before you can watch anything, but this is quick and easy.

SBS is region-locked but anyone traveling away from home can regain access using an Australian VPN server.

If you have a cable TV subscription, watching the 2022 World Cup is really easy; just sign into the CTV website for coverage of all 64 matches, including France vs Australia. This service often lets users stream on-demand content without signing in, but there’s no guarantee that this will apply to World Cup fixtures.

To stream the World Cup without cable in Canada, you’ll need a TSN account. These are $19.99 CAD per month and don’t come with any kind of free trial.

CTV and TSN won’t normally let you watch from outside of Canada. With a Canadian VPN server, travelers can regain access and keep streaming while abroad.

The 2022 World Cup is being shown in dozens of countries, so there’s a good chance you’ll be able to watch even if we didn’t list yours above. We’d recommend checking out the list of World Cup broadcasters to start with, though it’s worth mentioning that some of these have agreed to let other companies broadcast select matches as well. Additionally, you may need a cable TV subscription to watch online, so be sure to check this before the match is due to begin.

Which team is expected to win: France or Australia?

France are heavy favorites to win this match and the group. There are a couple of reasons for this, including each team’s history. France, for instance, regularly gets into the later stages of the competition, and has won the World Cup twice. Australia, however, has never made it past the round of 16.

We should also consider each squad’s recent performance. Australia has won just five of its last 12 fixtures, with four ties and three losses. France secured seven wins (including a thumping 8–0 victory over Kazakhstan) and lost just twice in the same period, with three ties.

One of the best things about soccer is that anything can happen on the night. Everybody loves an underdog story and Australia has proven it can make it out of the group stages in the past, so perhaps this match might not be as straightforward as the fans expect. Either way, it’s sure to be a memorable game, so why not tune in on November 22 and see it for yourself?