How to watch New York Yankees online with live streaming, no blackouts

The 2020 MLB season is in full swing and you can watch the New York Yankees live online but might find yourself needing to bypass blackout restrictions.
Paul Bischoff TECH WRITER, PRIVACY ADVOCATE AND VPN EXPERT 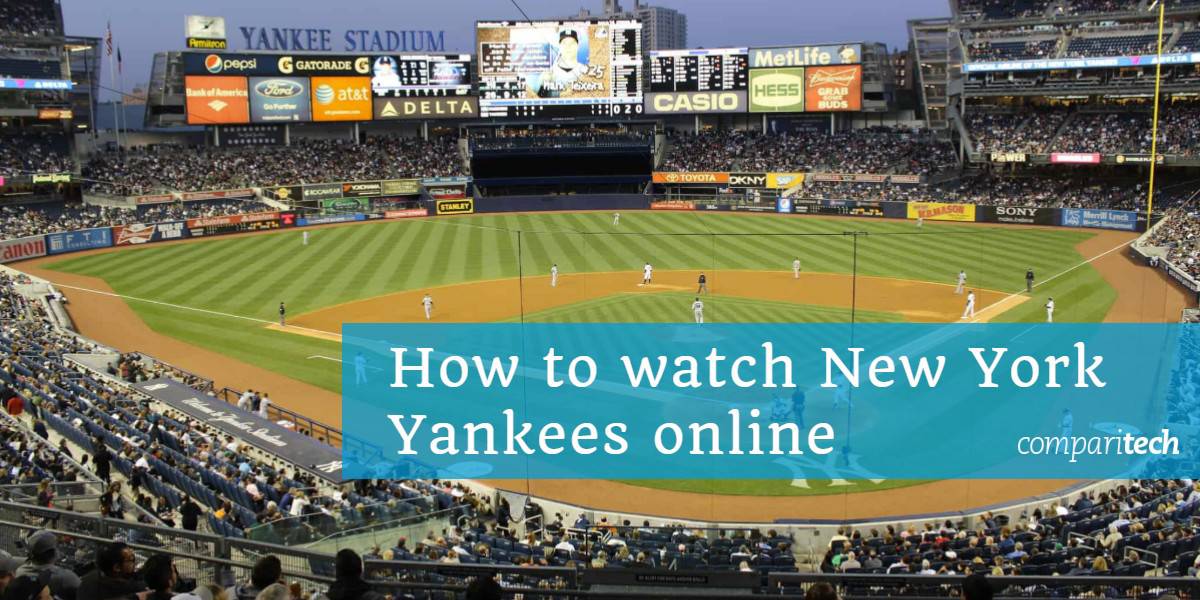 Yankees fans can watch live MLB games online through a few different TV streaming services, which we’ll list below. If you’re currently in New York, blackout restrictions might prevent you from watching the Yankees online. That’s because local broadcasters have bought up exclusive rights and don’t allow fans to watch the game elsewhere.

If you are traveling and find your usual home streaming services are blocked, a VPN, or Virtual Private Network, is a tool you can use bypass blackout restrictions on MLB games and watch as though you were at home. A VPN routes your internet connection through an intermediary server in another location. By connecting to a VPN server outside of the blackout region, you can unblock Yankees live streams. Likewise, if you’re outside of the US, streaming sites will block you from watching. You can use a VPN to access Yankee’s games on your home services while traveling abroad.

BEST VPN FOR YANKEES:Our top recommendation is NordVPN. Speeds are fast enough to live stream the Yankees in HD, and easy-to-use apps are available for a wide range of devices including Windows, MacOS, iOS, Android, Amazon Fire TV, Linux, and certain wifi routers. 24/7 live chat support is available, and it comes with a 30-day money-back guarantee, so you can try it risk-free.

A good VPN can unblock all of the streaming options available to watch Yankees games. Here’s how it’s done:

Note that VPNs vary in how effective they are at unblocking certain websites and apps. More on that below.

Where to watch the Yankees live online

Yankees fans have a few different options for where they can live stream regular and postseason games over the internet. Note that we only list official sources and not unlicensed streams. No matter which you stream from, blackout restrictions apply.

Official broadcasters include Fox Sports, ESPN, and TBS, as well as a few regional networks, so we’ll look at a few over-the-top internet TV providers that carry those channels in addition to official MLB apps.

MLB.tv and the MLB app

MLB.tv is the official subscription streaming service for MLB games, and the MLB app (formerly MLB At Bat) is the league’s official app for Android, iOS, game consoles, and streaming devices like Apple TV, Roku, Chromecast, and Amazon Fire TV. If you only want to watch Yankees games online, the price is $20 for the remainder of the 2020 season as of time of writing. You can use your MLB.tv subscription to log into MLB app.

Note that MLB.tv only covers out-of-market games, so if you live near New York or one of the teams that the Yankees play against, you’ll be blacked out. If you live in a blackout region or outside the country, you can unblock the stream with a VPN.

Note, however, that a VPN cannot unblock games on the MLB At Bat app for iOS and Android. The app requires your GPS to be turned on in order to verify your location. A VPN does not change your GPS location and therefore won’t unblock Yankees games on Android and iOS. Turn the GPS off, and the app won’t work. We’ve even tried GPS-spoofing apps to no avail.

So if you’re watching on a PC or Mac, a VPN will get the job done. It will probably also work with streaming media devices and game consoles (though we haven’t tested all of them). But if you’re on Android or iOS, check one of the alternative options below.

Sling TV is a streaming television service designed for cord-cutters who don’t have cable or satellite. TBS, Fox, and NBC Regional Sports networks, which carry most games, are included in the Sling Blue package. The cost is $30 per month, and as of time of writing, a 3-day free trial is available.

The Sling Orange package includes ESPN and costs the same as Sling Blue, or you can add it as an optional extra. MLB Network and MLB Network Strike Zone are also available in the Sports Extra package for another $10 per month.

You must be in the United States to watch the Yankees on Sling TV. If you’re not currently in the US, use a VPN to stream live games while traveling abroad. You can watch in a web browser or get the Sling TV app for iOS, Android, Roku, Apple TV, Chromecast, game consoles, Amazon Fire TV, and many smart TVs.

YouTube TV is a paid service from YouTube that carries several live channels for $65 per month. Fox, FS1, ESPN, ESPN2, MLB Network, NBC, and TBS are all available. You can even record games for later viewing with no storage limits. Up to six accounts are allowed per household, plus there’s a 30-day money-back guarantee.

You can watch in a web browser on a PC or Mac, or get the app for Android, iOS, Chromecast, Roku, PS4, Xbox, Apple TV, Amazon Fire TV, smart TVs, and more.

If you’re living abroad, you’ll need to connect to a VPN server in the United States to watch.

Hulu Live is Hulu’s foray into streaming live TV channels in the US. It has all the same baseball channels as YouTube TV except for MLB Network. A 7-day free trial is available. You can watch in a web browser or get the app for Android, Apple TV, Chromecast, Fire TV, game consoles, Roku, and smart TV. It costs $55 per month.

You’ll need to either be in the US or connect to an American VPN server in order to watch.

AT&T TV Now (formerly DirecTV Now) is a standalone TV streaming service from cable provider DirecTV. You don’t need a cable subscription to use it. For $55 per month, you get ESPN, ESPN2, Fox, FS1, and TBS. In the past, MLB Network was available in pricier packages, but that no longer seems to be the case.

You’ll need to use a VPN to access AT&T TV Now if you’re not in the US.

FuboTV costs $60 per month and lets you stream Fox, FS1, and TBS. Unfortunately, ESPN, ESPN2, and MLB Network are not available. A few local Fox channels are included, though. A 7-day free trial is on offer.

Although FuboTV operates in several countries, you need the US package to get the channels needed to watch Yankees games. And in order to access those channels, you need to either be in the US or use a VPN to change your location.

You might be able to find a few third-party live streaming websites offering Yankees games free of charge. However, these sites often operate in a legal grey area and should not be trusted. Many links to and on these sites are either scams or downright malicious. Unofficial streams are unreliable, low quality, require a lot of buffering, and could get cut off at any second. Avoid the malware, trackers, and poor quality by sticking to legal sources

The Yankees are strong contenders for the 2020 postseason after this year’s shortened 60-game regular season. The team started off the season strong but then fell in the division standings after several consecutive losses. Highlight players on the Yankees starting lineup include Aaron Judge, Giancarlo Stanton, Gary Sanchez, Aaron Hicks, and Luke Voit.

“Yankee Stadium” by Shinya Suzuki licensed under CC BY 2.0