How to watch MLB games live online without cable 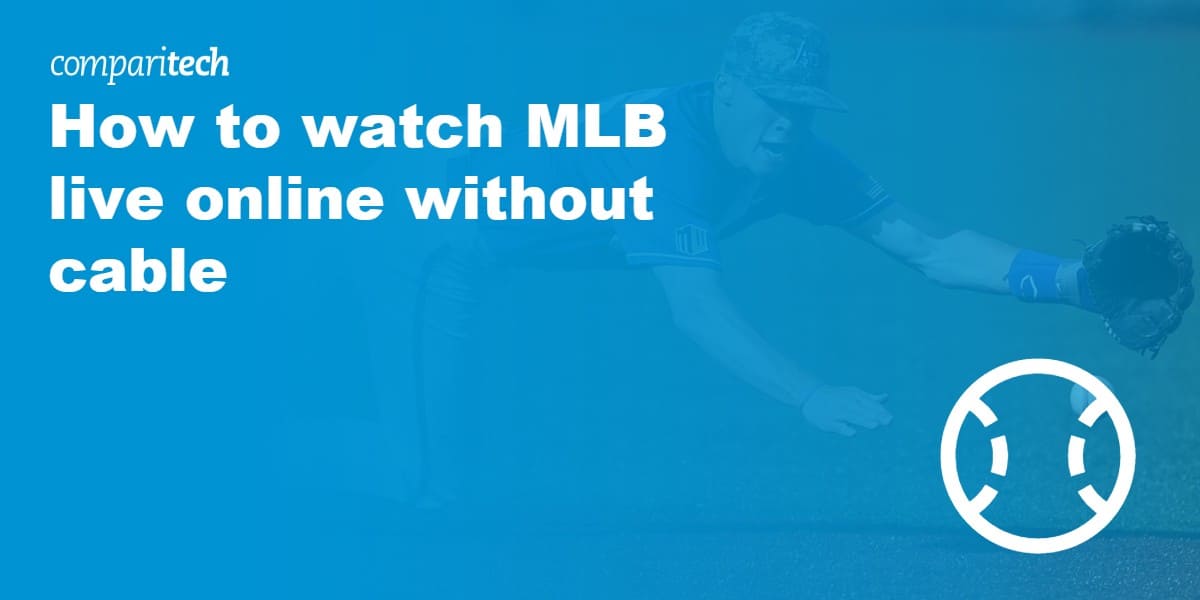 Major League Baseball broadcasts have long been exclusive to TV and radio stations in the United States. But as more and more people start cutting the cord, demand for watching baseball online without a cable or satellite subscription grows.

In this article, we’ll show you several ways to live stream baseball online from any country, plus how to avoid blackouts of local teams and access your home streaming services when traveling out of state.

Avoid blackouts with a VPN

All of these cord-cutting solutions are still subject to blackout restrictions. Because local broadcasters on cable and satellite still get first dibs on content licenses, no one else is allowed to show live games in their coverage area.

In most cases, blackout restrictions can be bypassed by using a VPN. By encrypting your device’s internet connection and routing it through a remote server, you can make it appear as though you’re accessing the stream from back home or somewhere outside the blackout region.

Our top recommendation is NordVPN, which all the servers, bandwidth, live customer support, and strong security you need packed into a simple and intuitive app.

Here’s how to stream the MLB Playoffs online from anywhere:

TRY IT RISK-FREE:Get NordVPN at a huge discount now. The deal includes a 30-day no-quibbles money-back guarantee so you’ll receive a full refund if unsatisfied.

How to watch baseball with MLB.tv

The simplest way to watch baseball games online is to buy a subscription to MLB.tv, the league’s official streaming service. At time of writing (mid-season), prices are as follows:

7-day free trials are available for the first two, but not the single-team package. Students and military personnel can receive a 35 percent discount.

Picture quality is excellent, you can view multiple games at once, and subscribers can even DVR the games on supported devices. MLB.tv subscriptions include live streams of playoff and World Series games.

But MLB.tv has a few restrictions, the most glaring of which are regional blackouts.  This stipulation often prevents fans on MLB.tv from watching the games they want to see the most–their hometown teams–until 90 minutes after the game has concluded. The live audio, however, is never blacked out.

You can easily bypass blackouts on MLB.tv with a VPN on a desktop web browser like Chrome or Firefox, and watch games from abroad. Unblocking the official MLB mobile app, however, is not so easy. More on that below.

MLB.tv says subscribers can “watch every out-of-market game regular season game live or on demand on over 400 supported devices.” Additionally, subscribers can watch a full archive of old games, track their fantasy league players, use a widget to track pitch stats, listen to just the audio broadcast, and watch highlights and stat updates as they are updated in real-time. 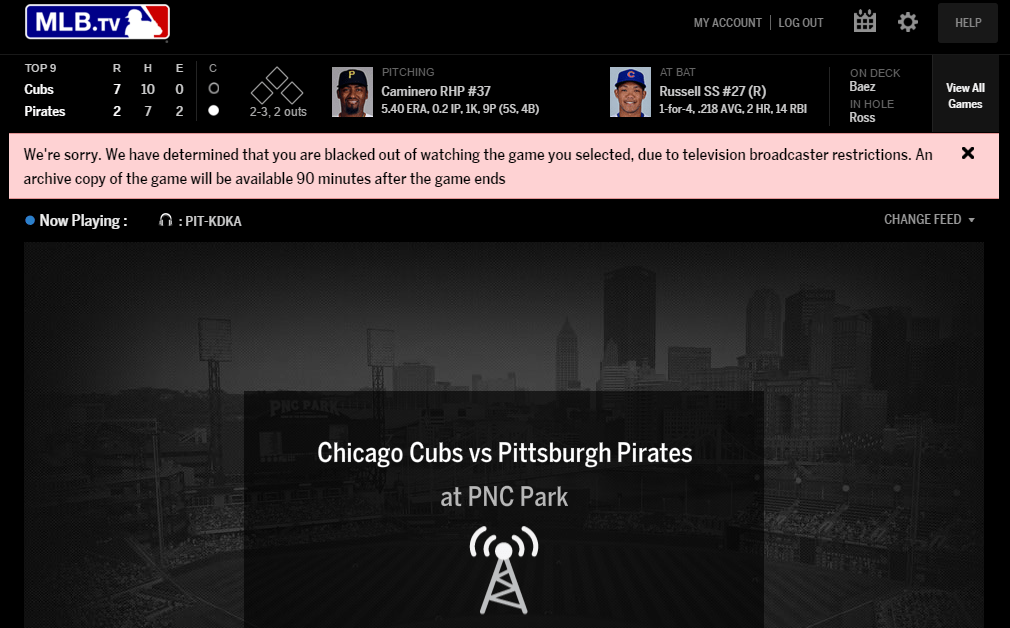 The official MLB app (formerly called MLB At Bat) is the league’s official mobile app for Android and iOS. MLB.tv subscribers can live stream games right on their mobile devices for an additional monthly fee.

Be warned, however, that you cannot bypass regional blackouts on the MLB app, even with a VPN. This is because the app uses your phone’s GPS—not its IP address—to verify your location. The GPS must be turned on to stream video, and it will detect whether or not you’re using a GPS location spoofing app. Nothing short of rooting or jailbreaking your device will be enough to bypass the location checks.

Fubo TV includes TBS, FS1, and some local Fox channels in its basic and Extra packages. MLB Network is not included, which means no NL Division Series games. A 7-day free trial is available. After that, the basic plan is $65 per month.

Fubo TV is available in several countries, but you’ll need the US package to get the channels required to stream MLB games live online. That means a VPN will be necessary if you’re outside of the United States.

Sling TV, a sort of cable service through the internet, a little while back obtained the rights to live stream games on TBS, ESPN, Fox Sports 1 and regional Fox Sports networks. If your team broadcasts games on those networks, this solution can work for you. They include Diamondbacks, Reds, Braves, Tigers, Marlins, Rays, Royals, Cardinals, Rangers, Twins, Indians, Padres, Angels, Brewers, and Yankees. After a 3-day free trial, you’ll need the Sling Blue and Sling Orange plans, which costs $35 a month and includes a slew of other channels.

Sling TV is only available in the United States. If you’re not in the country or the game you want to watch is blacked out, you can watch it using a VPN. You can view in a web browser or on an app for iOS, Android, Roku, Apple TV, smart TV, etc.

Youtube TV is a live streaming cord-cutting service that costs $65 per month and comes with a two-week free trial. You get a wide range of channels with sports content, including Fox Sports, FS1, FS2, ESPN, MLB Network, NBC, and TBS. Youtube TV will even record games played by teams you’ve selected as your favorites—there are no storage limits. You can have up to six accounts per household.

Youtube TV is only available in the United States, but you can access it with a VPN if you’re abroad.

Hulu + Live TV is another cord cutting service with FS1, TBS, ESPN, and more. Compared to Youtube TV, the trial period is shorter (7 days) and it doesn’t come with MLB Network. The base price is $65 per month.

Hulu Live is only available in the US, so travelers abroad will have to access it with Hulu VPN.

AT&T TV Now (formerly DirecTV Now) is a standalone streaming service from telecom giant AT&T. The price is $70 per month for the basic package, which includes ESPN, FS1, Fox Sports, and TBS. The next plan up costs $85 per month and includes the MLB Network. A 7-day free trial is on offer.

AT&T TV Now is only available to US residents, so you’ll need a VPN if you want to watch from overseas.

Another option is to watch MLB.tv games on third-party live streaming websites. These often operate in a legal grey area, so we don’t encourage their use. Internet users can find an unsanctioned stream through either Google or Reddit with a bit of searching. Beware that many links are scams, the sites are littered with advertisements, trackers, and links to malware. They are unreliable and could get cut off at any moment during the stream. And they are almost always lower quality than the official outlet.

What if my streaming device doesn’t support VPN apps?

In these situations, you can instead install the VPN on a compatible router, or use a laptop to configure a virtual router (Windows, Mac). You can then connect your streaming device to the VPN-protected wi-fi network.

This setup creates a wi-fi hotspot that routes all connected devices through the VPN, allowing you to bypass geographic restrictions on devices that don’t support VPN apps.

A small number of VPNs, including ExpressVPN, include a smart DNS proxy with their plans that can be configured independently of the VPN. Many devices that don’t support VPNs will still let you change your DNS settings, so this is a possible workaround for VPNs that support it.