Want to live stream the Group B fixture between Wales and Iran? We’ll break down how you can watch Wales vs Iran (and the rest of the World Cup) online, and explain how to stream this match for free.
Ian Garland Streaming, Kodi and VPN Expert 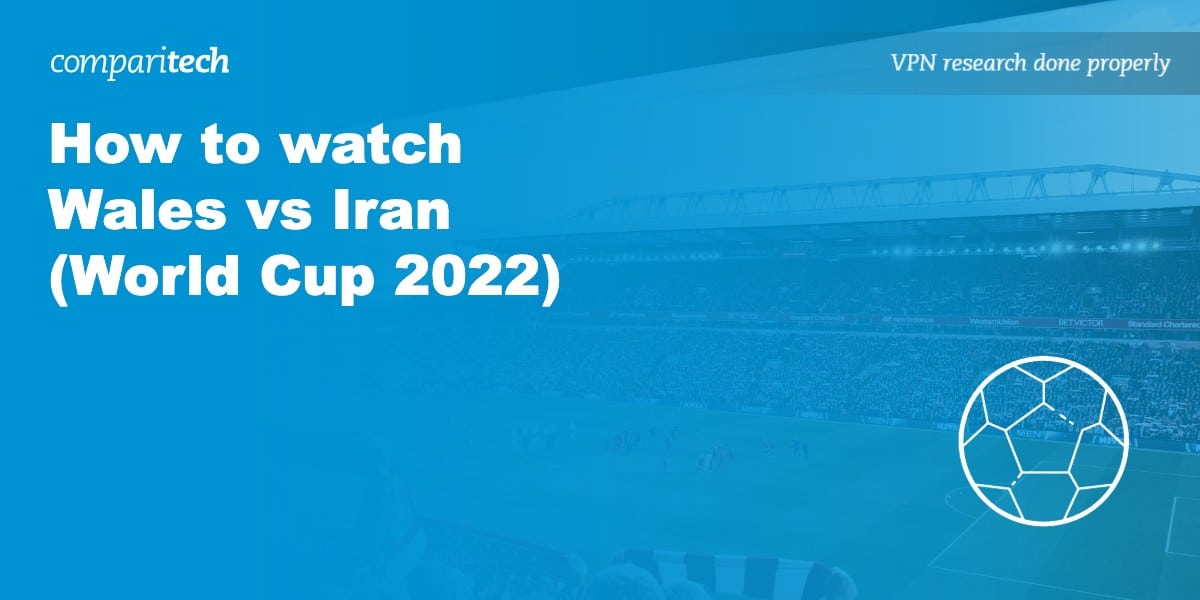 On November 25, around 45,000 fans will descend upon Ahmad Bin Ali Stadium to see Wales play Iran at the FIFA World Cup. This match will begin at 10:00 GMT (13:00 local / 03:00 PT / 06:00 ET) and is absolutely crucial if either team hopes to make it to the Round of 16. You don’t have to travel all the way to Qatar to see what happens, though; just take a look below to find out which broadcasters are showing this fixture live.

You should note that we’ll only be recommending official World Cup broadcasters. While unlicensed streams are near-inevitable, these are often taken down part way through, and the video quality tends to be pretty low. Further, there’s no guarantee they’ll even be in English. Not to worry, though: there are lots of ways to stream Wales vs Iran legitimately, and many networks will show this game free of charge.

The World Cup will only air on region-locked channels. As such, people traveling abroad will have to use Virtual Private Networks (VPNs) to continue using the same streaming services they would back home.

How to live stream Wales vs Iran online from abroad

VPNs improve your digital privacy by encrypting your traffic and concealing your true location. This latter feature can also be used to regain access to your favorite streaming services while on vacation, which is great if you’re in a place that doesn’t offer an English-language broadcast.

Follow these steps to stream Wales vs Iran from anywhere:

Whenever you’re planning on watching a live event, it’s a good idea to test your VPN with the streaming service you’ll be using beforehand. This prevents any nasty surprises and ensures you’ll have enough time to get help from your VPN’s support team. All of the VPNs mentioned above have free, around the clock live chat, which makes resolving issues quick and easy.

NordVPN offers a fully-featured risk-free 30-day trial if you sign up at this page. You can use the VPN rated #1 for streaming the FIFA World Cup with no restrictions for a full month. This is perfect for fans hoping to follow their favorite team while on a short trip abroad.

How to watch Wales vs Iran for free on UK TV

Brits can actually stream the entire 2022 World Cup without paying a penny. Every game will air on BBC or ITV channels, which can be accessed using BBC iPlayer or ITV Hub, respectively. Wales vs Iran happens to be on BBC One, so just make sure you create a free iPlayer account ahead of time and you should be good to go.

If you have other plans on November 25, don’t panic. Recently-aired content is added to BBC iPlayer’s on-demand library shortly after it finishes, meaning you’ll be able to watch the game at your leisure. The only catch is that you’ll need a valid TV License to use this service, even if you’re only watching replays (though you won’t need one to stream on-demand content on ITV Hub).

BBC iPlayer and ITV Hub are both geo-restricted, but you can continue using them abroad with the help of a British VPN server. NordVPN comes with a risk-free 30-day money-back guarantee so users can claim a full refund if they’re in any way unsatisfied (or if they just don’t need the VPN after the World Cup ends).

Where else can I watch the 2022 World Cup online?

The FIFA World Cup will air in almost every country, so no matter where you are, there’s a good chance you’ll be able to watch Wales vs Iran live. Here’s a quick guide to international World Cup broadcasters:

FOX holds the rights to the 2022 World Cup and will show 35 games on the FOX channel, with the other 29 (including Wales vs Iran) airing on FS1. If your cable TV plan includes these channels, simply log into the FOX Sports website to watch online at no added cost.

If you’d like to stream the World Cup without cable, there are plenty of ways to do so. FOX Sports also lets users sign in with a Sling TV, fuboTV, Hulu with Live TV, or YouTube TV account. We’d recommend choosing Sling TV. At $17.50 for the first three months, it’s significantly cheaper than the other options. Just be sure to choose the Blue plan, since the Orange one doesn’t let you watch FOX.

There are different broadcasters for Spanish-language coverage: Telemundo and Universo. On the plus side, the NBC website allows you to sign in with cable provider details or any of the services listed above. You could also sign up for Peacock Premium ($4.99 per month), which will show every game of the tournament at a very reasonable price.

Due to regional restrictions, you’ll need a VPN to use any of these services abroad.

Wales vs Iran is scheduled to kick off at 20:00 AEST, making it one of the few fixtures Australians can watch live at a reasonable time. Of course, you’ll also be able to stream on-demand replays shortly after the game finishes. This match, and every other, will be shown on SBS, which doesn’t cost anything to use. You will be asked to create an account before being able to stream anything, but this only takes a minute or two.

SBS normally only works in Australia. Those traveling abroad can continue using the service by connecting to an Australian VPN server.

If you have a cable TV subscription, just log into the CTV website and you’ll gain access to live streams of all 64 World Cup fixtures, as well as replays (though these come a few hours after the final whistle). Don’t have cable? In that case, you’ll need a TSN account ($19.99 CAD per month). If you’d prefer to watch in French, you can sign up for RDS instead of TSN. The price is the same either way. Unfortunately, neither service includes a free trial period.

These platforms are all geo-blocked, meaning you’ll have to use a VPN to regain access from abroad.

Even if we haven’t mentioned your country above, there’s almost certainly a suitable local broadcaster. You might not be able to watch with English commentary, but that’s not really the main draw in the first place. We’d suggest checking out the list of World Cup broadcasters and spending a few minutes finding out if you can access their services without a cable TV plan.

Which team is expected to win: Wales or Iran?

At the time of writing, most bookmakers expect this match to end with either a Welsh victory or a draw. That’s actually quite surprising given that Wales haven’t even qualified for the World Cup since 1958, while their opponents have made it to the group stage four times since 1998.

Additionally, Wales have had a difficult year so far, winning just two of their eight matches, drawing two, and losing four. Iran, on the other hand, has won almost every game since 2021, with eight wins, one draw, and two losses.

Half the fun of soccer is not knowing what’s going to happen. It’s possible Wales pulls off an incredible upset and really shakes things up in Group B. That prospect alone is worth tuning in for, and thanks to our help, you now know exactly how to do that.