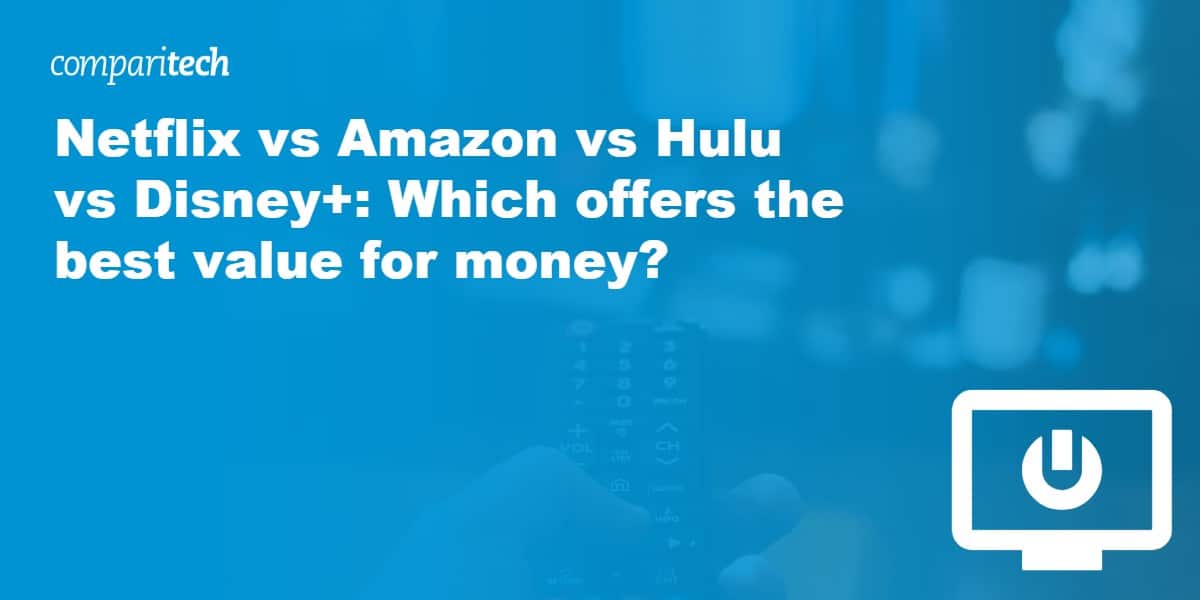 Earlier last month, Disney+ surpassed 100 million users. An impressive feat to say Netflix, which has been around 12 years longer (Netflix’s online streaming services were launched in 2007, Disney+’s in November 2019), has just over double this figure (203 million as of January 2020).

Elsewhere, Amazon is estimated to have around 150 million Prime users (who can access its video streaming services), while Hulu has around 40 million subscribers.

And this got us thinking–which service offers the best value for money?

On a basic cost-per-month basis, Prime Video wins hands down, but when it comes to cost-per-titles, Netflix is the standout winner.

Find out how each service stands up in your country and which platform offers the best value for money.

Which is the cheapest on a cost-per-month basis?

As we’ve already mentioned, Prime Video boasts the cheapest cost-per-month prices across the board. In every country we studied (where Prime is available), Prime is the cheapest video-on-demand service available.

Of all the services on offer in all of the countries, the Turkish are able to bag the best deal with Amazon Prime being a bargain 7.90 TL ($1.09) here. This is closely followed by the price paid by Indians and Brazilians ($1.78 and $1.80 respectively). In fact, the majority of Southern American and Asian countries we compared can subscribe to Prime Video for a below-average ($6.42) price.

Americans have the most expensive Prime Video prices

At the other end of the scale is the United States where Prime Video costs $12.99. This is primarily due to users here only being able to purchase “Prime,” not just “Prime Video.” So while video-only users will get a raw deal, those using all of the services on offer with Prime won’t feel as out of pocket.

The majority of European countries all pay above the average of $6.42 for Prime Video.

Argentina has the cheapest Netflix prices

Switzerland has the most expensive Netflix prices

Argentina has the cheapest Disney+ prices

For the first time, though, Americans can rest easy as they enjoy cheaper-than-average Disney+ prices. Paying $7.99 for a Disney+ plan, Americans pay 15 percent less than average ($9.30).

Switzerland has the most expensive Disney+ prices

All of the European countries we covered also pay above average.

Hulu is only available in the US and Japan but the Japanese may feel as though they’re being over-charged for their service when they realize they pay around 45 percent more than Americans for their plans. $9.42 compared to $5.99.

Which is the cheapest on a cost-per-title basis?

On average, users pay $0.00182 per Netflix title (based on basic subscriptions). Prime users pay $0.00340, Hulu users $0.00438, and Disney+ users $0.00781. But, as you can see from the below chart, a large number of countries also get more value for money on a cost-per-title basis for Prime than Netflix. However, with some countries paying a vast amount more per title for Prime, Netflix is the overall winner.

Canada and South Africa are the most cost-effective place for Prime Video, while Latvia is the least

Thanks to their extensive Prime Video libraries and slightly below average costs per month, Canada and South Africa are the most cost-effective places to have a Prime Video subscription. In these countries, residents pay $0.00044 per title which is 154 percent less than average.

Furthermore, despite the United States being the most expensive place to have a Prime Video subscription, it is one of the most cost-effective on a cost-per-title basis. With a whopping 28,975 titles available through Prime Video in the US, users pay $0.00045 per title.

This is in vast contrast to Latvia, as we’ve detailed above.

Argentina is the most cost-effective place for Netflix, while Denmark is the least

Thanks to its cheap cost per month (as we’ve already seen), it’s no surprise that Argentina is the most cost-effective place to have Netflix with each title costing $0.00063. But with a high cost per month ($12.65) and less-than-mediocre library size (3,864), Denmark is the least cost-effective place for a Netflix subscription. There, each Netflix title costs $0.00327 which is 57 percent more than average and 135 percent more than Argentina.

Europeans also tend to have a less cost-effective plan for Netflix, especially compared to their Southern American counterparts.

Argentina is the most cost-effective place for Disney+, while Japan is the least

On average, users have access to the most titles through their Prime accounts with 5,095 titles in total available (averaging 4,432 movies and 663 TV shows). This is closely followed by Netflix where an average of 4,889 titles are available. But there is a better mix of movies and TV shows for most Netflix users with 3,210 and 1,679 titles respectively.

As we can see from the above chart, Prime often has a far larger catalog of titles in some countries – but in others, Netflix’s catalog far exceeds Prime’s. Elsewhere, Disney+ only beats one catalog in one country–Portugal–where there are 1,326 Disney+ titles compared to 897 Prime titles.

Australia, Canada, Ireland, New Zealand, the UK, and the US get access to the most titles across all the platforms

When it comes to accessing a good number of titles across all of the platforms, the aforementioned countries come out on top. All of them enjoy above-average library sizes for each platform bar the Disney+ library in the US which is just below average (1,041 titles compared to the average of 1,216).

Americans do, however, enjoy access to the largest number of titles on Prime with 28,975 in total which is 140 percent more than average and over 8,000 more than second-place UK with just over 20,000 titles.

The largest Disney+ library is found in Australia where there are 1,683 titles–32 percent more than average but only a mere 9 more than second-place Canada.

Netflix’s largest library isn’t found in any of these countries, though, as the Irish have access to the greatest number of titles with 6,379 in total. This is 26 percent more than average.

Countries with smaller library sizes tend to have a greater mix of TV series and movies compared to the countries with access to larger libraries.

Which country’s best for each video-on-demand service?

If you like a bargain and aren’t too concerned about having access to extensive libraries, Argentina or Brazil are your best bets for Netflix, Prime, and Disney+, offering cheap prices across the board.

Argentina’s also a good bet if you want to get the most bang for your buck from your Netflix or Disney+ subscription. For Prime, Canada or South Africa are technically the most cost-effective but they only just beat the United States by $0.00001 per title, and with almost 29,000 titles on offer in the US, this has to be the pick for Prime subscriptions.

For cost-effectiveness and money-saving options, European countries are best avoided.

We used all of the countries with library size statistics available on JustWatch.com before investigating the prices on each website.

Users of Amazon Prime Video may also get other benefits, e.g. music titles and free delivery. However, to provide a fair comparison with the other services, we have based our study on the cost-effectiveness of Prime as a video subscription service only.