How to watch Billions season 5 online from anywhere

It’s been a year but the wait is almost over; season five of Billions is about to arrive. Today, we’ll share everything you need to know about the new series, including how you can use a VPN to watch Billions from abroad.
Ian Garland Streaming, Kodi and VPN Expert 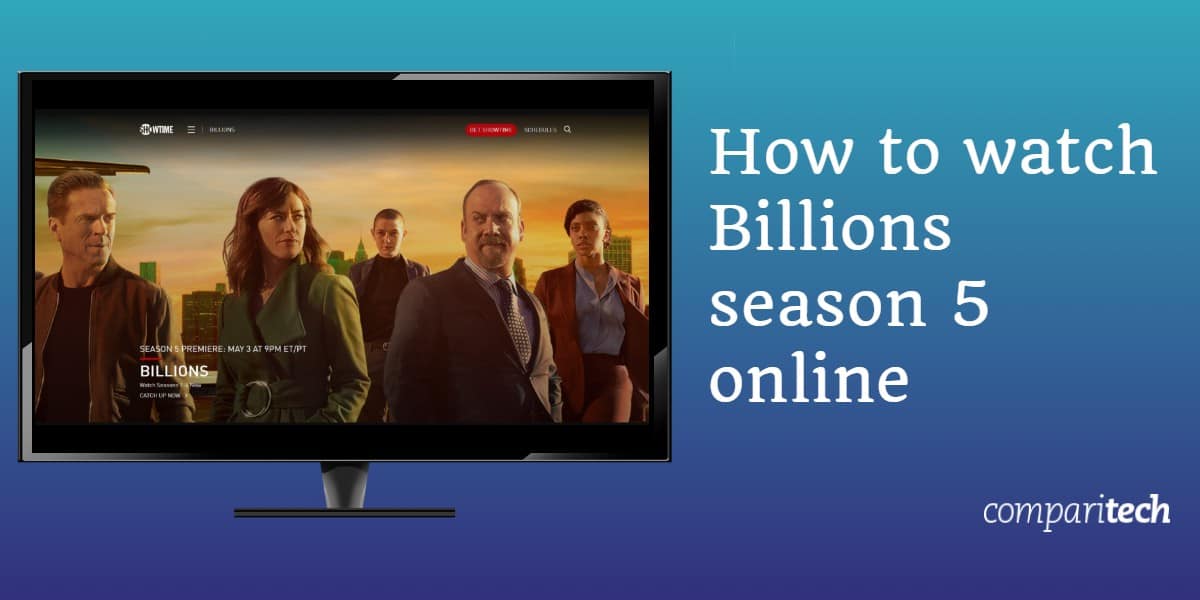 The fifth season of Billions will air at 9 PM PT/ET every Friday from May 3. This time, the gloves are off: after their brief stint as allies in season four, Axe and Chuck are back to hating one another. This all but guarantees that these 12 new episodes will be packed full of unexpected twists and turns; below we’ll explain how to watch Billions season 5 online so you don’t have to miss a second of the action.

Billions is one of Showtime’s most popular shows, which makes it highly likely that unauthorized streams will be available. That said, these frequently fail to offer the same level of video quality, and they’re always at risk of being taken down for copyright violation. For these reasons, we recommend only using official sources to watch Billions season 5 online. On the plus side, with an almost simultaneous international release, it’s easy to stream Billions wherever you are.

Season five of Billions will only air on geo-restricted streaming services. If you’re traveling abroad and looking to watch on your usual platforms, you’ll have to connect to a Virtual Private Network (VPN) server in your home country.

How to unblock and live stream Billions season 5 from abroad

VPNs are quite easy to use but they can be a little overwhelming at first. Below is our simple step-by-step guide to unblocking and watching Billions season 5.

Here’s how to watch Billions (season 5) online from anywhere:

Note that Billions season 5 will air live. This is why it’s so important for you to make sure your VPN works properly (using the steps above) before the premiere. This approach ensures that if you run into problems, you’ll still have time to contact your VPN’s customer support team and won’t have to miss the start of the long-awaited fifth season.

How to watch Billions season 5 on US TV

Billions season 5 will air exclusively on Showtime in the US. New episodes will be broadcast at 9 PM ET/PT and will be added to the platform’s on-demand catalog the same day. If you’re looking to catch up ahead of the premiere, Showtime also has the first four seasons.

If your cable TV package includes Showtime, you can just enter your provider details and start watching immediately at no added cost. Luckily, though, there are plenty of ways to watch Billions online even if you don’t have cable. Users can sign in with a fuboTV, YouTube TV, AT&T WatchTV, or Hulu account, and if you don’t have any of these, you can always sign up to Showtime Now for $10.99 USD per month (after a 30-day free trial).

Showtime is region-locked and only available in the US. However, by connecting to a US VPN server, you can use it while traveling abroad. ExpressVPN offers a risk-free 30-day money-back guarantee, allowing you to watch Billions season 5 and claim a full refund if unsatisfied.

Where else can I stream Billions season 5 live online?

This is a hugely popular show, so it should come as no surprise that season 5 will be released internationally. What is unusual, though, is how quickly it’s available outside of the US. Below, we’ll let you know which networks are showing the new series of Billions in your country:

Canadian viewers can stream Billions’ fifth season on Crave the same day as it’s released in the US. While several different plans are available, the base subscription ($10.99 CAD per month) is all that’s required to watch Billions. New to the series or looking to catch up before the new episodes arrive? No problem: Crave also lets you watch seasons 1–4 on-demand.

Crave is geo-restricted and can usually only be accessed from within Canada. That said, Canadians in other countries can use this service as normal by connecting to a VPN.

Stan is the official Billions broadcaster in Australia. This platform will have a new episode every Friday from May 3. If you can’t wait a week, you can always rewatch your favorites since all four prior seasons are available on-demand. Stan costs $10 AUD and comes with a one-month free trial.

This service is region-locked. As such, if you’re outside Australia, you won’t be able to use it without the help of a VPN.

We don’t have an exact date for the Billions season five UK premiere, but Sky claims the new series is “coming soon.” Previous seasons of this show aired on Sky Atlantic which means that it’s likely Sky TV customers will be able to watch season 5 via the Sky Go app. It’s also possible to watch Sky Atlantic without cable; you just have to sign up to Now TV. This service’s Entertainment pass costs £8.99 per month and comes with a seven-day free trial.

Both Sky Go and Now TV are geo-restricted. This means that if you’re outside the UK, you’ll need a VPN to access them.

What do we know about the fifth season of Billions?

“It’s getting tribal out there,” says Maggie Siff’s character, Wendy in the teaser trailer for the upcoming season. Unfortunately, that’s about all we have to go on since the plot of the new series has been kept tightly under wraps. All that the teasers really tell us is that Axe, Mike, and Chuck are at loggerheads (as usual) and that Wendy will put together a faction of her own with the help of Lauren and Taylor.