How to watch Love Island USA online from anywhere 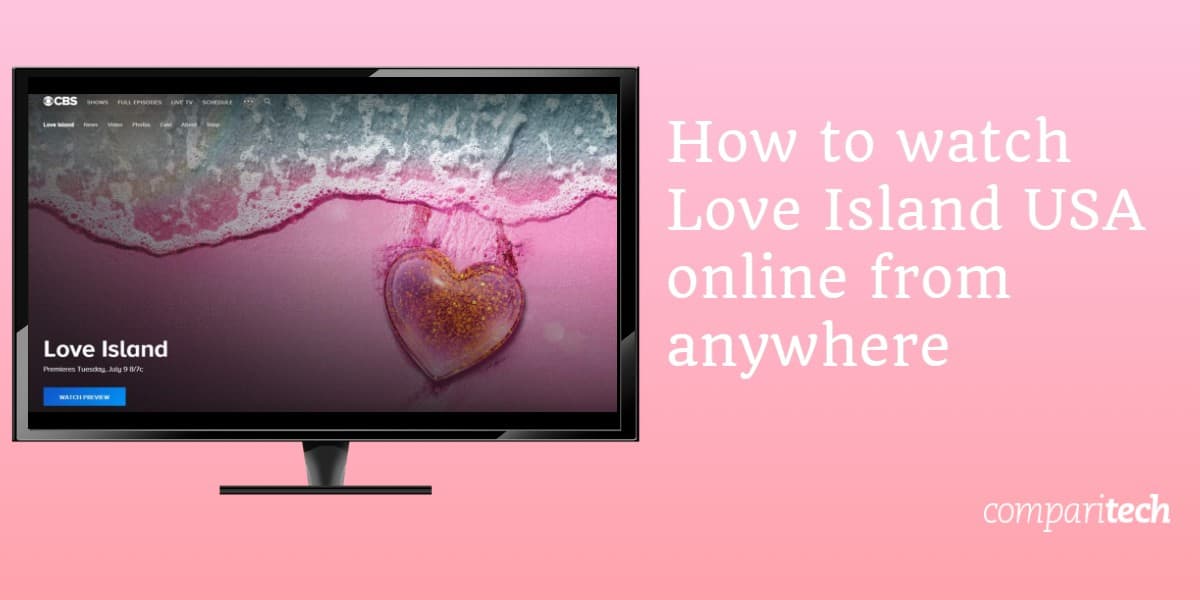 The first season of Love Island USA will premiere on CBS, July 9, at 5 PM PST (8 PM EST). There’ll be a new episode every weeknight until August 7, unless the season is extended partway through. Can’t get enough of this show? Don’t worry: below, we’ll let you know how to stream international versions of Love Island USA from anywhere in the world.

You should note that we’ll only be recommending official sources. This show is likely to be extremely popular, so unlicensed streams are almost inevitable. However, these often have subpar video quality, and can be taken offline at any moment for copyright violation. It’s very easy to watch Love Island online, and you can even watch several week’s worth of episodes for free, so there’s no need to resort to unreliable, third-party sources.

Many streaming services check the user’s IP address and prevent them from watching anything if they’re not from a specific country. However, VPNs enable you to change your IP address, spoofing your location and enabling you to watch content like Love Island USA abroad. We recommend ExpressVPN: it’s a fast, reliable VPN with strong unblocking ability, best-in-class security, and over 3,000 servers worldwide.

You can get started with ExpressVPN in just a few minutes. Just choose your preferred subscription length (one, six, or twelve months) and pay. There’s even the option to pay with Bitcoin if you’d like an extra layer of anonymity. However, this service doesn’t log any personally identifiable information so you can’t be tracked either way. ExpressVPN comes with a 30-day money-back guarantee, meaning you can stream Love Island risk-free and claim a full refund if unsatisfied.

How to watch Love Island USA abroad with a VPN

With the right VPN, unblocking geo-restricted services is easy. Just follow the steps below to live stream Love Island USA in the UK, Canada, Australia, or anywhere else:

Love Island USA will be broadcast live, so it’s important that you make sure your VPN works before the show actually begins. This way, you’ll know about any problems in advance and should still have time to get help from your VPN’s customer support team, meaning you won’t have to miss the start of an episode.

See also: How to watch the UK version of Love Island free online

How to live stream Love Island USA on US TV

CBS is the only broadcaster showing Love Island USA. If your cable TV package already includes this network or if you have a Hulu with Live TV, PlayStation Vue, fuboTV, or YouTube TV account, you can simply sign in and watch Love Island for free.

If you don’t have cable and want to stream Love Island free of charge, you have two options. The first is to wait for CBS to add new episodes to its on-demand library. This usually happens a few hours after airing, and episodes will be available for a few weeks at least. Want to watch live? As all of the streaming services above include a free trial (usually one week), you can simply sign up, watch Love Island, then cancel your account and switch to a different service when the trial expires.

The easiest way to watch Love Island USA without cable is to sign up for CBS All Access: at $5.99 USD per month, this service is far less expensive than any of the others mentioned above.

All of the streaming platforms above are geo-restricted, and some require you to use a payment method linked to a US address. Existing subscribers can log in as normal when abroad by connecting to a VPN server in the US, however.

Where else can I watch Love Island USA?

Love Island USA will be simulcast on CTV. If you already receive this channel as part of your cable package, you can just sign in with your provider details and watch Love Island USA live or on-demand at no added cost. However, with no online-only subscription available, there’s no way to watch Love Island in Canada unless you have cable.

According to Virgin Media’s Spring broadcast schedule, Irish fans can expect to see both Love Island USA and Love Island Australia on Virgin Media Two sometime this year. No dates or times have been confirmed as yet, though, and as this channel is currently broadcasting the British version of Love Island, it’s possible Love Island USA won’t be shown until Love Island UK season five is over.

It has been widely reported that Love Island USA will be shown on ITVBe from July 9. This doesn’t appear to be the case, however, as ITV’s broadcast schedule doesn’t have any listings for Love Island USA in the near future.

We can speculate at a release date, though. Last year, Love Island Australia aired on ITVBe in August, one month after the original series ended in Australia. By this logic, we can reasonably speculate that Love Island USA will begin airing in the UK at the beginning of September.

Can I watch international versions of Love Island in the US?

Currently, Love Island UK and Love Island USA are the only versions of the show with a US broadcaster. Hulu includes the first four complete seasons of Love Island UK in its base subscription ($5.99 per month with a one-week trial). Better still, it uploads a week’s worth of episodes from season five every Saturday, meaning you’ll never be too far behind.

Of course, if you’re only in the US temporarily, there’s nothing stopping you from using a VPN to access streaming services from your home country. For instance, you could watch Love Island Belgium/Netherlands on RTL or even tune in to Love Island Australia on 9Now when it begins later this year.

How does Love Island USA work?

Love Island USA works in the exact same way as the British version of the show, with one minor difference: it’s filmed in Fiji instead of Majorca. The premise is simple: 11 or 12 people enter the villa and anyone who doesn’t end up in a couple is eliminated from the show. However, you’re not safe just because you’ve found a partner, as new people arrive, people switch partners, and alliances are broken all the time.

When just four couples remain, fans can vote for the couple they’d like to win. These two contestants are then presented with a prisoners dilemma-style game: they can either split the prize money (£50,000 in the British version) or try to keep it all for themselves. Here’s the catch: if both people try to keep the money, they leave with nothing.

Who are the 2019 Love Island USA contestants?