How to watch Mr. Robot season 4 online from anywhere

Want to watch Mr. Robot season four online? We’ll explain how to live stream the entire fourth season of Mr. Robot, from abroad (outside of the US), using a Virtual Private Network (VPN).
Ian Garland Streaming, Kodi and VPN Expert 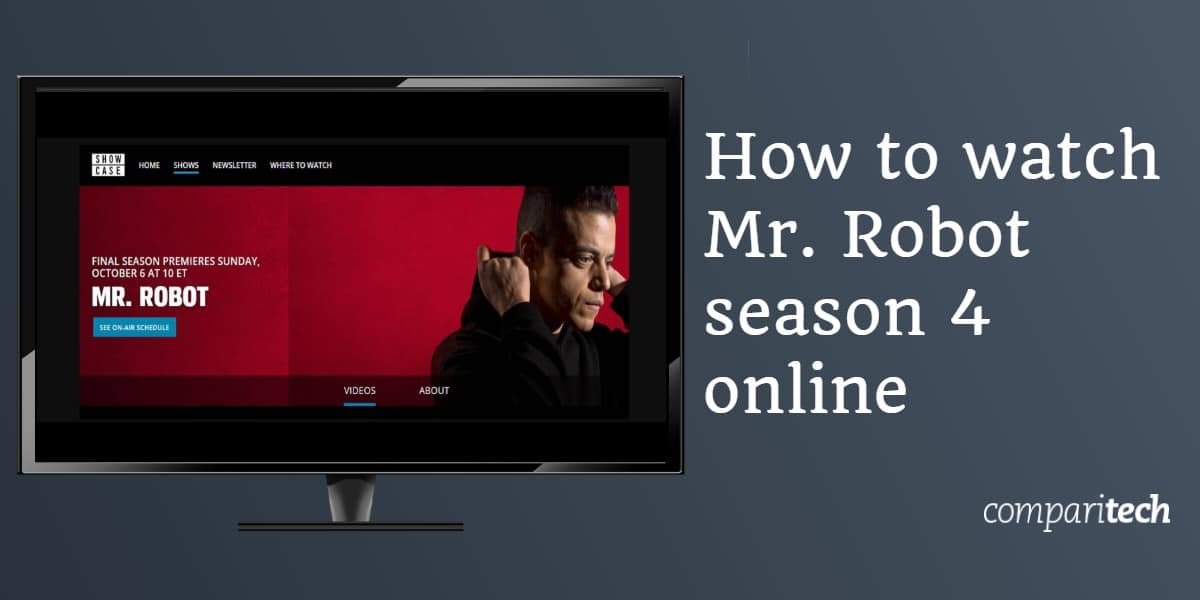 Mr. Robot’s fourth and final season will premiere at 10 PM EST (7 PM PST / 3 AM BST) on October 6. There’ll be 13 episodes in total which means we can expect this series to finish for good on December 29, assuming an uninterrupted, one-episode-per-week release schedule. Read on to find out how to watch Mr. Robot season 4 online from anywhere, even abroad.

You should be aware that we’ll only be recommending official sources. Given this show’s popularity, unlicensed streams will almost certainly be available. However, we advise against using these; not only are they often laggy and low-resolution, but third-party streams are also frequently taken offline partway through for copyright violation. With legitimate ways to watch Mr. Robot in several countries, there’s no reason to resort to shady, unauthorized streams.

This show will only air on geo-restricted streaming services. This means you’ll need a VPN to watch Mr. Robot season 4 abroad.

How to watch Mr. Robot season 4 abroad with a VPN

VPNs make it easy to access geo-restricted services abroad. They work by routing your traffic through a server elsewhere in the world, hiding your real IP address and tricking platforms into believing you’re actually located in the required country.

Here’s how to watch Mr. Robot season 4 from anywhere with a VPN:

If you’d like to stream Mr. Robot live, we strongly recommend running through the steps above before the premiere. This way, you’ll have plenty of time to get help from your VPN’s customer support team and won’t be caught off-guard by last-minute technical problems.

How to watch Mr. Robot season 4 live on US TV

In America, Mr. Robot season 4 will air exclusively on the USA Network. This means that if your cable TV package already includes this channel, you can sign in to the website and begin streaming immediately at no extra cost.

You can also watch Mr. Robot online without cable. USA Network allows you to log in with an existing fuboTV, Hulu, PlayStation Vue, Sling TV, or YouTube TV subscription. All of these services come with a free trial, but none are long enough for you to stream the whole season for free. As such, we’d recommend using Sling TV; at $15 USD per month, it’s the least expensive option.

Looking to catch up on seasons 1–3? These are currently available on Amazon Prime Video, although you’ll have to pay $14.99 per series.

All of the above services are region-locked. To watch Mr. Robot on any of them when abroad, you can connect to an American VPN server. Don’t have a VPN yet? ExpressVPN comes with a 30-day money-back guarantee, allowing you to try the service out risk-free and claim a full refund if unsatisfied.

Where else can I watch Mr.Robot online?

At the moment, only a couple of international broadcasters have been announced, although it’s likely more will arrive once season 4 begins. Take a look below to find out which networks are showing Mr. Robot season 4 in your country:

Currently, the only way for British fans to stream Mr. Robot season 4 is to sign up for Amazon Prime Video. This service offers every previous series and will add new episodes from season 4 within 24 hours of their US release, starting October 7. In previous years, episodes were usually added at around 7 AM BST the following day, although this upload schedule isn’t set in stone.

Amazon Prime costs £7.99 per month but includes a 30-day free trial. This means that if you don’t mind waiting a few months, you can sign up, watch the fourth season, then cancel your account to avoid being charged.

This service will only be showing Mr. Robot in the UK. As such, you’ll need a VPN to watch it from abroad.

Showcase is the only network broadcasting Mr. Robot in Canada. Unfortunately, there’s no live stream (or even on-demand episodes) on the Showcase website. There is, however, a rather roundabout way for Canadian fans to watch Showcase online.

First, you’ll need an Amazon Prime Video account, which costs $7.99 CAD per month after a 30-day free trial. Next, you’ll have to pay an extra $12.99 for the STACKTV channel pack. This method isn’t ideal given its high cost, but as there are no other ways to stream Mr. Robot online in Canada, there isn’t really any alternative.

The STACKTV channel pack is only available in Canada. You can still access it from abroad by connecting to one of your VPN’s Canadian servers.

What can we expect from Mr. Robot season 4?

The trailers for Mr. Robot season four reveal a fair amount of information. We know, for instance, that this series will be set in December 2015, and will focus on the cat-and-mouse games between Elliot and Whiterose. Series star (and Academy Award winner) Rami Malek claims that the ending will be “very, very climactic,” and in a show which places such major emphasis upon surprising its audience, it’s hard to see how this could be wrong.