How to stream Riverdale season 6 online from anywhere

Riverdale is back for its sixth season. Below, we’ll explain everything we know about upcoming episodes and let you know how to watch Riverdale season 6 for free online.
Ian Garland Streaming, Kodi and VPN Expert 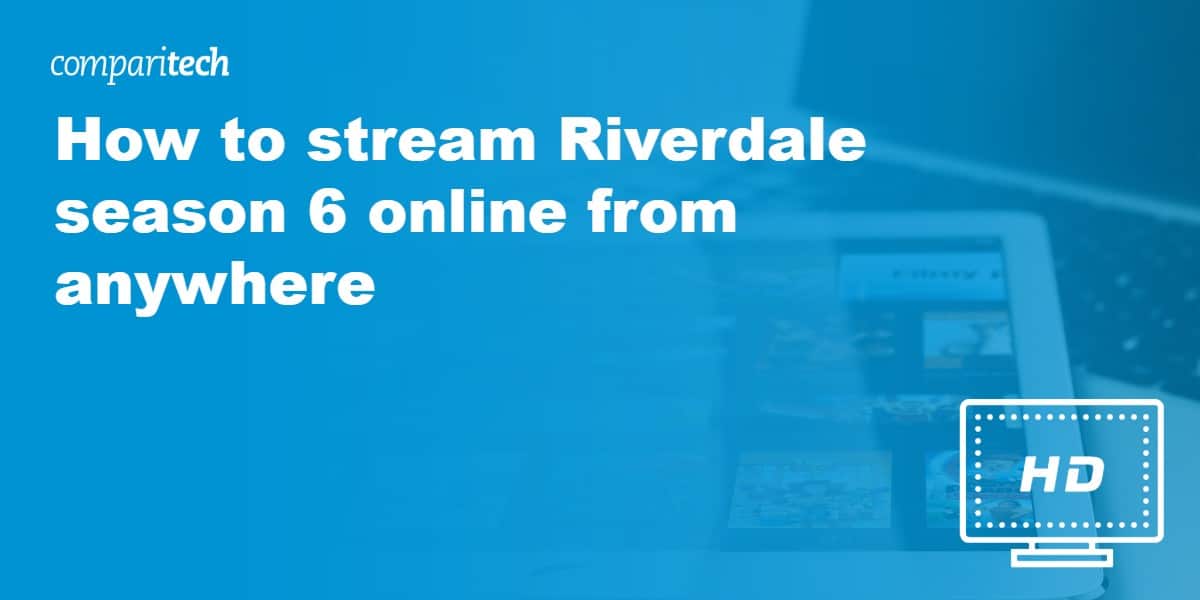 Season six of Riverdale will get underway at 9 PM EST on November 16. Episodes will be released weekly, but if you tune in for the premiere, you can watch the first five episodes back-to-back as part of a crossover arc the showrunners have referred to as “Rivervale”. No prizes for guessing which teenage witch will be making an appearance. You’ll find all of the details below, including how to stream Riverdale season 6 online from anywhere.

It’s important to note that we’re only recommending official sources. Aside from being unethical (and in many cases, illegal), third-party streams almost always compromise on video quality. To make matters worse, they’re known for suddenly being taken offline, making them a particularly poor alternative to legitimate streams. The good news is that it’s possible to stream Riverdale for free, and we’re about to explain how.

New episodes of Riverdale will be shown exclusively on region-locked streaming services. If you’re traveling abroad when season 6 begins, you’ll need a Virtual Private Network (VPN) to access the channels you’d normally use to watch back home.

How to watch Riverdale season 6 online from abroad

VPNs aim to enhance your digital privacy by encrypting your internet traffic and sending it through a server elsewhere in the world. Of course, this second step can also help you spoof your location and use your favorite services during a trip abroad.

Here’s how to stream Riverdale from anywhere in the world:

If you’re looking to live stream Riverdale, we highly recommend taking the time to check whether your VPN works with your chosen streaming site ahead of time. This way, you won’t have to miss the start of an episode due to unforeseen technical trouble. Luckily, all of the VPNs mentioned above offer 24/7 live chat, so it’s quick and easy to get help.

NordVPN offers a fully-featured risk-free 30-day trial if you sign up at this page. You can use the VPN rated #1 for streaming Riverdale with no restrictions for a full month. Needless to say, this is perfect for anyone hoping to catch new episodes while on vacation abroad.

How to watch Riverdale season 6 for free on US TV

Once again, The CW is the main broadcaster for this series. This is great news for fans, since it means you can stream the entire sixth season of Riverdale online for free. Users don’t even have to create an account. There are two very minor caveats, though: you’ll have to wait until the day after each episode airs and only the five most recent episodes will be available. Miss one and it’ll be quite a long time until you can catch up, as we’ll explain momentarily.

It’s technically possible to stream Riverdale live online, but only in a handful of cities. YouTube TV, fuboTV, and Hulu with Live TV all carry this channel, but we’d recommend entering your ZIP code to see whether The CW is actually available where you are before signing up. These services all start at $64.99 (GBP £47.94) per month and all offer a free trial of at least one week.

All of the older seasons are available on Netflix US, and have traditionally arrived about a week after the finale. In other words, you face several months of waiting if you happen to miss an episode on The CW. Netflix plans begin at $8.99 (GBP £6.63) per month and no longer include a trial.

The services above are all geo-blocked, so you’ll need a VPN to use them abroad. NordVPN offers a 30-day money-back guarantee, allowing you to try it risk-free before committing. If you’re in any way unsatisfied, just cancel during this period to receive a full refund.

Where else can I watch Riverdale online?

It might surprise you to learn that Riverdale is extremely popular outside of the US as well. Naturally, fans are waiting with bated breath for the sixth season to arrive. The good news is that international audiences can all watch in the same place: Netflix.

Those in the US have to wait until the series is over before it’s added to Netflix, but everywhere else receives new episodes weekly. That’s right: the latest episode from Riverdale season 6 will be available just one day after it’s shown in the US in more than a dozen countries including Canada, the UK, Australia, India, France, Japan, and Germany. Naturally, these libraries all include the first five seasons as well.

If you’re traveling in the US or a country where Netflix is unavailable, you can securely access your home country’s content library using a VPN.

What will happen in Riverdale season 6?

It’s… challenging to predict what will happen in any given episode of Riverdale, but luckily we don’t have to. That’s because the show has released a trailer teasing its “Rivervale” crossover event. Notably, Archie and Betty are still alive despite the season 5 finale, though you’ll have to tune in to find out exactly how they escaped.

The other big moments from the trailer are Cheryl leading a cult, a ghostly figure stalking Toni, and the appearance of the literal devil. Further, there are shots from at least two musical numbers. Of course, the main event is the arrival of Sabrina, from Riverdale’s sister show, The Chilling Adventures of Sabrina. We don’t know exactly why she’s here, but given Jughead refers to the town as “Rivervale”, we can assume the casts’ hometown has changed realities somehow.

As you might expect, the majority of the main cast will return. However, this time around it’ll be supplemented by some of The Chilling Adventures of Sabrina’s most popular actors. Here’s a quick rundown of who you can expect to see in Riverdale season 6: