How to watch Survivor: Winners at War live online (season 40)

Are you traveling outside the US? That doesn’t mean you can’t live stream Survivor: Winners at War. We’ll show you how you can easily watch Survivor season 40 online from abroad with a Virtual Private Network (VPN).
Mark Gill TECH JOURNALIST, VPN AND PRIVACY SPECIALIST 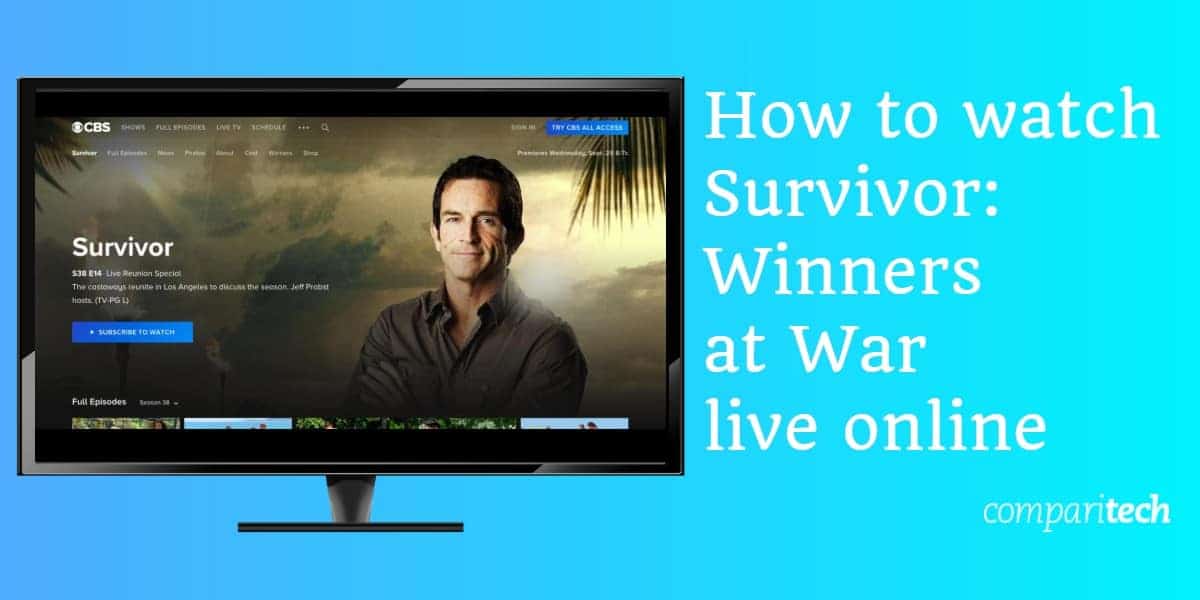 Survivor: Winners at War – season 40 will premiere on Wednesday, February 12 at 8 PM EST (5 PM PST) on CBS. However, the problem is that CBS content is region-locked and only available in the US. Try live streaming from abroad and you’ll encounter the following message:

“Oops! This video isn’t available in your region.”

Read on to find out how to unblock CBS and watch Survivor season 40 live online, from anywhere, with a VPN.

Keep in mind that we’re only recommending official sources for live streaming Survivor season 40 online. While there are bound to be unlicensed streams for this popular American reality series, they simply aren’t worth your time. Unauthorized streams are frequently taken offline for copyright violations. What’s more, the poor resolution and performance may well spoil your enjoyment of Survivor season 40. Don’t worry, we’ll show you a number of ways you can watch Survivor live online, with or without cable.

How to watch Survivor: Winners at War live online

Now for the fun part! Here’s how to watch Survivor: Winners at War live online, even if you’re outside the US:

Here’s how to watch Survivor Season 40 online abroad (outside the US):

How to watch Survivor season 40 live on US TV

If you’re in the US and have a cable TV subscription, you can watch Survivor season 40 live online at no additional cost. While some CBS shows are available to watch for free on-demand, all Survivor content requires a CBS All Access account (this is also required for watching CBS live online).

CBS All Access plans are available for $5.99 USD with limited commercials or $9.99 for no ads and the option to download videos for offline viewing. Both plans include 1 week of CBS All Access for free. It’s worth knowing that you can also watch CBS via the following streaming services: AT&T TV Now ($50 USD/month), FuboTV ($54.99/month), Hulu with Live TV ($44.99/month), and YouTube TV ($49.99/month).

Where else can I watch Survivor season 40 live online?

The upcoming 40th season of Survivor will be shown on Global in Canada. The season premiere airs on Wednesday, February 12 at 8 PM. In order to watch live, you’ll need to sign in with a TV provider. However, you can watch new episodes on-demand for the first seven days after broadcast without signing in. If you’re outside Canada, you’ll have to connect to a Canadian server via a VPN as content on the platform is geo-blocked. By having a Canadian IP address, you can watch Survivor season 40 online from anywhere in the world.

Can I use a free VPN to watch Survivor season 40?

While a free VPN may be tempting, we strongly recommend against using one. Most people find that such services offer very few servers, limiting the potential to unblock websites and services in other countries. Worst still, the high number of users places a heavy load on the limited number of servers, resulting in poor performance. This is particularly noticeable when live streaming. You’ll also find that many free VPNs can’t unblock the likes of CBS or Hulu.

It’s important to approach any free VPN with a degree of suspicion. After all, free VPNs are businesses and have to make money one way or another. Unfortunately, this may mean tracking your online activity and selling the data to third parties without your knowledge. You may also find yourself spammed with ads or have your device infected with malware. For this reason, we only recommend the best-paid VPNs that actually protect your privacy.

What can we expect from Survivor season 40?

Survivor first premiered in 2000 and is still going strong as it heads into its 40th season. The new season is called Survivor: Winners at War. Filming for season 40 took place from May to June 2019 with this being the eighth consecutive season to be filmed in Fiji.