How to watch Terminator: Dark Fate online (outside the US) 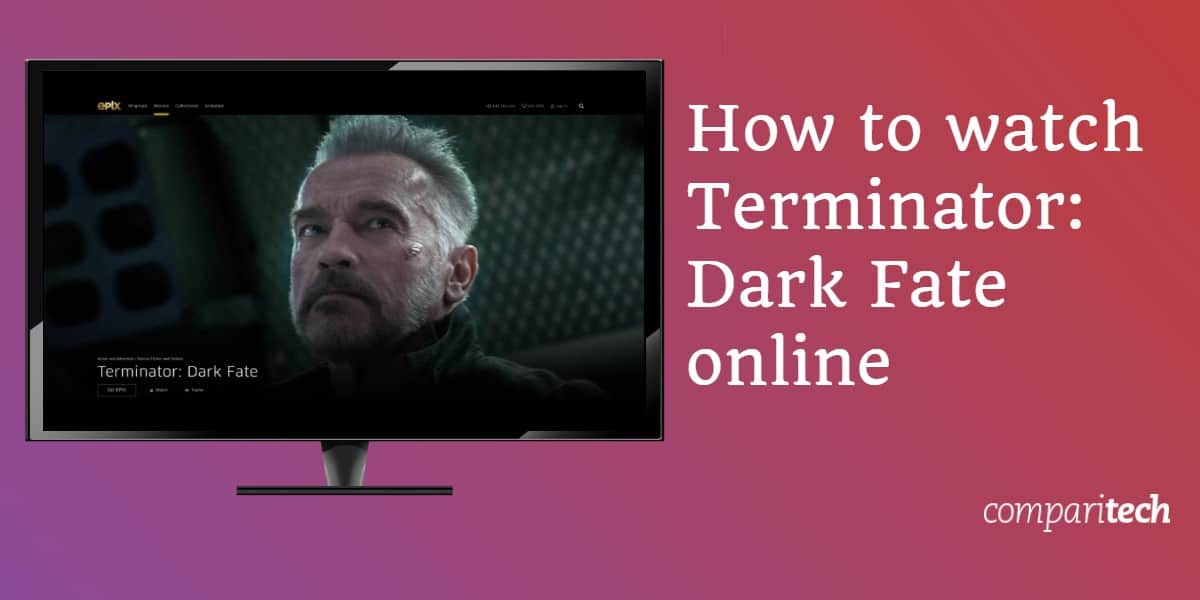 It’s been more than 35 years since the original Terminator movie came out but the series is still going strong. In fact, thanks to a steady stream of people looking to experience the original for the first time, it remains extremely valuable to any streaming platform that has the rights to show it. As such, it’s really quite simple to stream Terminator: Dark Fate online. Read on to find out how you can watch for free, from anywhere (even outside the US).

You should note that we’ll only be recommending official sources for watching Terminator: Dark Fate. Although this movie may be available on third-party streaming sites, these rarely provide anything near the quality that official sources do. Additionally, their streams are often taken down for copyright violation, making them impractical as well as underwhelming. Luckily, there are several legitimate ways to watch, so you won’t have to resort to shady streaming sites.

Terminator: Dark Fate is only available on region-locked services. If you’re traveling abroad and want to watch on your usual streaming platform, you’ll need a Virtual Private Network (VPN).

How to watch Terminator: Dark Fate abroad with a VPN

Here’s the good news: it can take less than a minute to unblock and stream geo-restricted content with a VPN. Just follow the steps below to watch Terminator 6 outside the US.

Here’s how to watch Terminator: Dark Fate online from anywhere:

How to stream Terminator: Dark Fate for free on US TV

There are a couple of ways to watch Terminator 6 for free. Hulu and Epix Now carry this movie and both offer a free trial period (one month and one week, respectively). This means that you can sign up, stream the movie, and cancel to avoid being charged. If you decide to keep using these services after the trial, they’ll each cost you $5.99 USD per month.

If you’d like to watch older Terminator movies, things get pretty complicated. Hulu, Epix Now, and YouTube all let you stream the original for free. Additionally, if you sign up for a free Peacock account, you’ll be able to watch the third and fourth movies, Rise of the Machines and Salvation.

Unfortunately, no major streaming service lets you watch the other entries in the series (Terminator 2: Judgment Day and Terminator 5: Genisys) for free. Instead, you’ll have to pay to rent these from services like YouTube, Vudu, or Amazon Prime Video.

The services above are all geo-restricted and may not carry Terminator: Dark Fate in other countries. As such, if you’re traveling abroad, you’ll need a VPN to watch it. ExpressVPN includes a risk-free 30-day money-back guarantee, which means you can try it out and claim a refund, no questions asked, if it fails to impress you.

Where else can I watch Terminator: Dark Fate online?

This movie has actually been out for quite some time, so there are plenty of international broadcasters available. Here’s how you can stream Terminator: Dark Fate in your country:

Here’s the short answer: Terminator: Dark Fate is available on Now TV. This service’s Cinema pass costs £14.99 per month and includes a seven-day free trial. In other words, if you cancel before the week is up, you won’t be charged.

It’s actually possible to watch most of the Terminator series for free in the UK, but you will have to bounce between streaming services. Here’s a brief guide:

Note that these services are region-locked, offering varying content in different countries. As such, you’ll need a VPN to access them from outside the UK.

The only way to watch Terminator: Dark Fate for free in Australia is to sign up for Foxtel Now. This service usually costs $25 AUD per month, plus another $20 for the movie pack, but during your 10-day free trial, you’ll be able to watch anything you like. Alternatively, if you’re already a Foxtel TV customer, you can just sign in and stream at no added cost.

So how do you go about streaming older Terminator movies? Well, as you’ll see below, you have plenty of options.

As ever, it’s worth mentioning that these streaming platforms are geo-restricted. However, you can access them from anywhere by connecting to an Australian VPN server.

Terminator 6: everything you need to know

If you’ve made it this far into the series, you should have a good idea of what to expect from Terminator: Dark Fate. You’ll find plenty of action, an abundance of killer robots, and familiar faces including the titular Terminator himself, Arnold Schwarzenegger. Notably, Linda Hamilton reprises her role as Sarah Connor, the first time she’s done so (other than voiceover work) since Terminator 2: Judgement Day.