How to watch The Voice season 22 (US) online anywhere

Interested in watching The Voice season 22 (US) online? This post explains how you can live stream The Voice online, using a VPN, from anywhere in the world.
Ian Garland Streaming, Kodi and VPN Expert 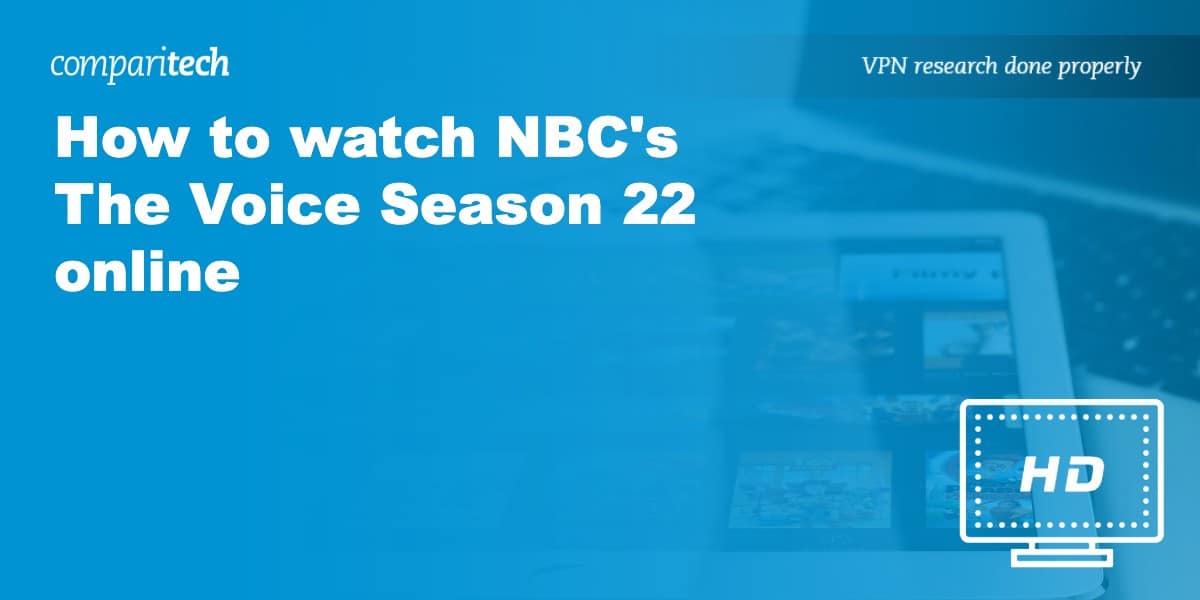 NBC has moved back to producing just one season of The Voice per year which means it has been a full year since season 21 first hit our screens. At long last, The Voice season 22 (US version) is finally here! It’s set to premiere on Monday, September 19 at 8 PM EST (5 PM PST). Below, we’ll explain how to stream The Voice online from anywhere so you don’t have to miss out if you’re traveling abroad.

We’ll only be recommending official sources in this guide. Although it’s possible to find unlicensed streams for almost any event online, we strongly advise against their use. Even if you ignore the copyright issues they present, these unauthorized streams are almost always low-quality, low-resolution, and prone to being taken down partway through. If you stick with the official sources in this post, you won’t have to contend with such issues.

The Voice season 22 is only on geo-blocked services. As such, you’ll need a VPN to stream it on your usual home services while traveling abroad.

How to watch The Voice season 22 online with a VPN

VPNs change your IP address, allowing you to access geo-blocked services from outside of their intended broadcast areas. Even if you’ve never used a VPN before, there’s nothing to worry about; just follow our step-by-step guide to watching NBC’s The Voice.

Here’s how to watch The Voice season 22 (US) online from anywhere:

NordVPN is offering a fully-featured risk-free 30-day trial if you sign up at this page. You can use the VPN rated #1 for NBC with no restrictions for a month—great if you want to binge The Voice US.

How can I watch The Voice season 22 live on US TV?

In order to watch The Voice season 22 live, you’ll need to stream NBC. If you have a cable TV subscription that includes NBC, you need only sign in to NBC’s website using your cable TV credentials (an email address or username and password). However, it’s also possible to watch cable-free via TV streaming services that include NBC such as FuboTV, Hulu, Sling TV, or YouTube TV.

Don’t mind waiting an extra day to watch season 22 episodes of The Voice? They’re also coming to the Peacock streaming service. Next-day access requires a paid subscription which currently costs $1.99 a month thanks to a limited time offer (usually $4.99/month).

If you’re a US resident who’s currently traveling abroad, you’ll be able to watch by using a VPN to get a US IP address. Still don’t have a VPN? NordVPN offers a 30-day money-back guarantee, meaning you can try it risk-free. If you’re unsatisfied, simply cancel to get a full refund.

Where else can I stream The Voice online?

Unfortunately, there’s only a few other countries showing The Voice season 22. Below, we’ll explain how to stream the new series abroad:

Canadian viewers will be able to watch the season 22 of the American version of The Voice live on CTV at the same time as it’s shown in the US. No registration or payment is required to stream CTV content live. However, only viewers in Canada (or those connected to a Canadian server) are able to watch.

How can I watch international versions of The Voice online?

While the US version of The Voice is the most popular, it’s by no means the only one available. In fact, dozens of countries have their own version. Below, we’ll explain where you can watch your country’s iteration of The Voice.

We’ve covered some of the most popular regional variants of The Voice above, but there are just too many to mention individually. If your country isn’t listed, you can find suitable local sources in the list of The Voice-franchise shows.

Can I use a free VPN to watch The Voice?

You might be tempted to use a free VPN, but they often introduce more problems than they solve. First of all, free VPNs usually have fewer servers than premium services, yet more users. This leads to network slowdowns, and in practical terms, you’ll likely experience choppy playback and long buffering times when streaming. In an attempt to mitigate this, some free services have instituted monthly data limits. Far from solving the problem, however, this simply makes these VPNs unsuitable as a long-term streaming solution.

How can a free VPN service afford to operate? Simply, it’s because you’re paying for it, albeit indirectly. Most free VPNs inject ads into the web pages you visit, but some go even further. By storing tracking cookies on your device, it can see exactly what you do online, even after you’ve disconnected from the VPN. This enables the service provider to record a wealth of consumer data that can then be sold to third parties without your knowledge.

It’s not just your personal privacy that’s at risk, but your system security too. A 2016 study of free VPNs for Android found that dozens never actually encrypted any user traffic whatsoever. This doesn’t even take into account the 38% of surveyed apps that attempted to install malware on the user’s device. A well-known service doesn’t guarantee you’re safe either, as shown by the Hola botnet controversy. To stay as safe as possible online, we recommend using a reliable VPN service that puts its customers’ privacy first.

If you’ve seen a talent show-style series before, you’ll probably know what to expect from The Voice. Aspiring singers apply to the show and take part in an open audition. If they’re good enough, they’ll then do a callback audition. Most of this happens off-camera, however. The next stage is called a blind audition, and it’s one of the most exciting parts of the show.

The four judges sit with their back to the contestant and if they like what they hear, can press a button to turn around and invite the performer to their team. If multiple judges turn around, the singer gets to choose whose team they join.

Next, The Voice contestants face off in a series of one-on-one performances. The person who performs best progresses, and the one who doesn’t is eliminated. There’s one caveat: each judge is allowed to “steal” two performers, adding them to their own team and preventing them from being kicked off of the show.

The final stage is where popularity makes all the difference. The one-on-one battles continue, but this time, the viewers are allowed to choose who wins. This continues until there’s just one singer left, at which point they win and are granted a record contract.

Who are The Voice’s Season 22 coaches?

Blake Shelton has been a coach on The Voice since its inception and is returning for season 22, as is long-standing host, Carson Daly. John Legend and Gwen Stefani are also making a return for their seventh and sixth seasons respectively. However, we have a new coach to look forward to. Camila Cabello will make her first appearance as a coach in season 22.