Trying to stream ABC iview abroad? Unfortunately, ABC iview is only available in Australia. However, you can use a VPN to unblock and watch ABC iview when traveling outside Australia; read on to find out how!
Mark Gill TECH JOURNALIST, VPN AND PRIVACY SPECIALIST 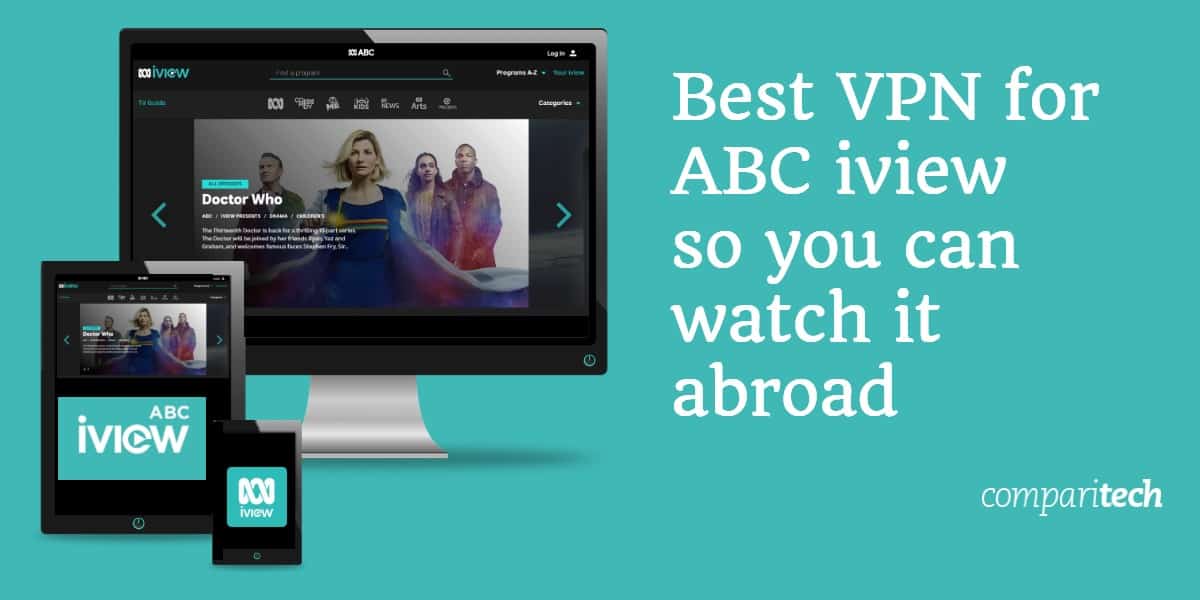 If you’re outside Australia and select an ABC iview live stream or on-demand video, you’ll be presented with a black screen. That’s because ABC iview content is region-locked and can only be viewed by users in Australia. However, there’s a way for you to watch ABC iview abroad by connecting to a server in Australia via a Virtual Private Network (VPN).

When you connect to a VPN, a virtual encrypted tunnel is created between you and the VPN server. All of your device’s internet traffic is routed through this tunnel, securing it from prying eyes. You’re provided with a new, temporary IP address and your actual IP address is hidden, protecting your identity and location. If you connect to a server in Australia, you’ll be given an Australian IP address, which allows you to unblock ABC iview from abroad.

Don’t have time to read the full article just yet? Below is a short summary to save you some time.

There’s no shortage of VPNs to choose from. This makes finding the right service all the more challenging. For this reason, we came up with a list of key criteria that each VPN had to meet in order to be considered:

To start watching ABC iview from abroad today, all you need to do is choose a VPN and follow the simple set-up instructions on the provider’s website. Below is our list of the best VPNs for watching ABC iview abroad (outside Australia) to help you choose the most appropriate VPN for your needs.

ExpressVPN offers high-speed servers in the Australian cities of Brisbane, Melbourne, Perth, and Sydney. In fact, its vast network of over 3,000 servers covers some 94 countries — far more locations than most VPNs. Needless to say, this is an excellent choice for unblocking geo-restricted content worldwide. Apart from ABC iview, ExpressVPN works with Netflix, Amazon Prime Video, BBC iPlayer, and more.

With a single ExpressVPN subscription, you can connect up to five devices simultaneously. Although this VPN is easy to use thanks to the beginner-friendly apps and browser extensions, 24/7 support is at hand should you need it. ExpressVPN makes for secure browsing and streaming with its 256-bit AES encryption and DNS, IPv6, and WebRTC leak protection. There’s also a kill switch feature, plus this VPN doesn’t log any personally identifiable information.

You can unblock ABC iview abroad via ExpressVPN’s apps for Windows, Mac, Linux, Android, and iOS. Firmware is available for routers while browser extensions are offered for Chrome and Firefox.

NordVPN has no shortage of servers in Australia with nearly 300 in total. This VPN has one of the largest networks of any VPN with approximately 5,500 servers across dozens of countries. Offering unlimited bandwidth, NordVPN allows you to stream and torrent without restriction. In fact, while you can use this service to stream ABC iview outside Australia, it even works with the likes of Netflix and Disney+.

This VPN includes 24/7 live chat support and lets you secure up to six devices at once. Your privacy is protected by a strict no-logs policy. Further security features include 256-bit AES encryption, a kill switch, and protection from DNS and IPv6 leaks. Specialty servers are also available. These include Double VPN and Onion Over VPN servers for an extra layer of security when browsing the web.

Connect to a server in Australia with the NordVPN apps for desktop (Windows, Mac, and Linux), mobile (Android and iOS), and Android TV. You can also download Chrome and Firefox browser extensions. Compatible routers can be manually configured.

BEST BUDGET VPN:NordVPN has a network of over 5,000 servers, including 300 in Australia for streaming ABC iview. Secure up to six devices simultaneously. Offers 24/7 support and lots of security features including a strict no-logs policy. 30-day money-back guarantee.

CyberGhost is a high-speed VPN service that offers unlimited bandwidth for browsing, streaming, and torrenting. Its network of approximately 6,000 servers is spread across 90 countries, including Australia. Fast speeds mean you can stream ABC iview from anywhere, without worrying about lag or buffering. Better still, this service also unblocks Netflix US and BBC iPlayer. It’s worth knowing that CyberGhost allows up to seven simultaneous connections per account.

This is one of the most secure VPNs you can use. CyberGhost publishes an annual transparency report, providing details such as how many police requests they receive each year. However, CyberGhost’s strict no-logs policy means they’re unable to comply with such requests. Also included is 256-bit AES encryption, DNS leak protection, and an automatic kill switch. Should you have any questions, 24/7 live chat support is available.

IPVanish has fast servers and offers unlimited bandwidth for streaming without interruption. Dozens of servers in Auckland, Brisbane, Melbourne, and Sydney, provide plenty of choices when it comes to unblocking ABC iview abroad. One particularly notable feature of IPVanish is that it lets you connect as many as 10 devices simultaneously. The service includes live chat support which is available to you 24/7.

With the IPVanish apps, you can easily connect to a server in a matter of seconds. This is a VPN service that offers a no-logs policy, allowing you to stay anonymous online. The use of 256-bit AES encryption and DNS leak protection ensures your data is kept safe from hackers and snoopers. There’s also a kill switch that ensures your personal information isn’t compromised in the event of the VPN connection dropping.

PrivateVPN is a good choice for streaming due to its fast servers and excellent unblocking ability. Although this VPN has a smaller network of servers, it does have a presence in 60 countries, including Australia. PrivateVPN works well with ABC iview and also unblocks many popular US streaming services such as Netflix and HBO. If you sign up to this VPN service, you’ll be able to secure up to six devices simultaneously.

This is one of the easiest VPNs to use for beginners, thanks to the simple design of the desktop and mobile apps. Regardless, live chat support and remote help and installation are available. PrivateVPN operates a no-logs policy and states that it doesn’t know what its users are doing online. Further security features include DNS leak protection, a kill switch, and of course, 256-bit AES encryption.

A PrivateVPN subscription gives you access to the apps for Windows, Linux, Android, Mac, and iOS. Manual installation is necessary for use with supported routers.

Surfshark is a VPN that you can share with family as it lets you have an unlimited number of simultaneous connections. Overall, it has more than 1,000 servers in 60 countries. Its servers in Australia allow you to stream ABC iview abroad. This is possible without buffering and lag as Surfshark has unlimited bandwidth and doesn’t throttle your connection. It’s also worth knowing that this VPN works with Amazon Prime Video and Hulu. You can also use Surfshark to get American Netflix while in Australia.

When it comes to security, Surfshark has plenty of features that serve to keep you safe online. In particular, there’s 256-bit AES encryption, a kill switch, and protection from DNS leaks. Surfshark is headquartered in the British Virgin Islands where there are no mandatory data retention laws. Regardless, this VPN operates a strict no-logs policy. It even offers DoubleVPN servers so you can have an extra layer of security while browsing.

Surfshark offers apps for Windows, Mac, Linux, Android, iOS, and Amazon Fire TV. You can also find browser extensions for Chrome and Firefox. Compatible routers can be set up manually.

Hotspot Shield stands out for having servers across five Australian cities: Adelaide, Brisbane, Melbourne, Perth, and Sydney. This makes it easy to unblock and watch ABC iview outside Australia. Furthermore, Hotspot Shield can be used with Amazon Prime Video thanks to its many US-based servers. Perhaps the main advantage of using Hotspot Shield is its very fast servers which means you can stream in 1080p HD without any issues.

Although Hotspot Shield offers apps that are very easy to use, you can find live chat support which is available 24/7. This VPN ensures your data is protected through its use of 256-bit AES encryption. There’s also DNS leak protection and a kill switch while Hotspot Shield states that it doesn’t keep any identifying logs of users. A subscription also includes access to a password manager as well as the option to secure up to five devices at a time.

Hotspot Shield apps are offered for desktop (Windows and Mac) as well as mobile (Android and iOS). There’s also a browser extension for Chrome. However, Linux and routers are not supported.

Can I use a free VPN to watch ABC iview?

We can’t guarantee that a free VPN will be able to unblock ABC iview outside Australia. Unfortunately, many free VPNs are unreliable when it comes to unblocking geo-restricted content. This is particularly the case with major streaming services including Netflix, BBC iPlayer, and DAZN. However, the main performance issue is their lack of speed. Free VPNs offer too few servers and this, combined with the many users seeking a free service, results in heavy server load and a lot of buffering and lag when browsing and streaming.

You should also consider the security features offered by any VPN. A quality VPN encrypts your data, securing it from prying eyes. There should also be a strict no-logs policy, ensuring that your personal information stays private. Unfortunately, this cannot be said for most free VPNs that lack even the most basic of security features. A free VPN may even harvest your data and sell it to third parties. If you value your online privacy and anonymity, you’re best off with one of the paid VPNs listed above.

How do I watch ABC iview from abroad?

Once you’ve settled on a VPN provider that suits you, setting up your VPN couldn’t be simpler. Below we’ll walk you through the basic steps so you can be watching ABC iview, wherever you are, in a matter of minutes.

Here’s how to watch ABC iview online from anywhere (outside Australia):

What can I watch on ABC iview?

ABC iview content is made up of the various TV shows that are broadcast on the ABC TV broadcast channels (ABC, ABC Comedy, ABC Me, ABC Kids, ABC News). This content is available live and on-demand. Here are some of the examples of TV shows you can watch on ABC iview:

Note: We have a separate article on the best VPNs for ABC Go, a US service.