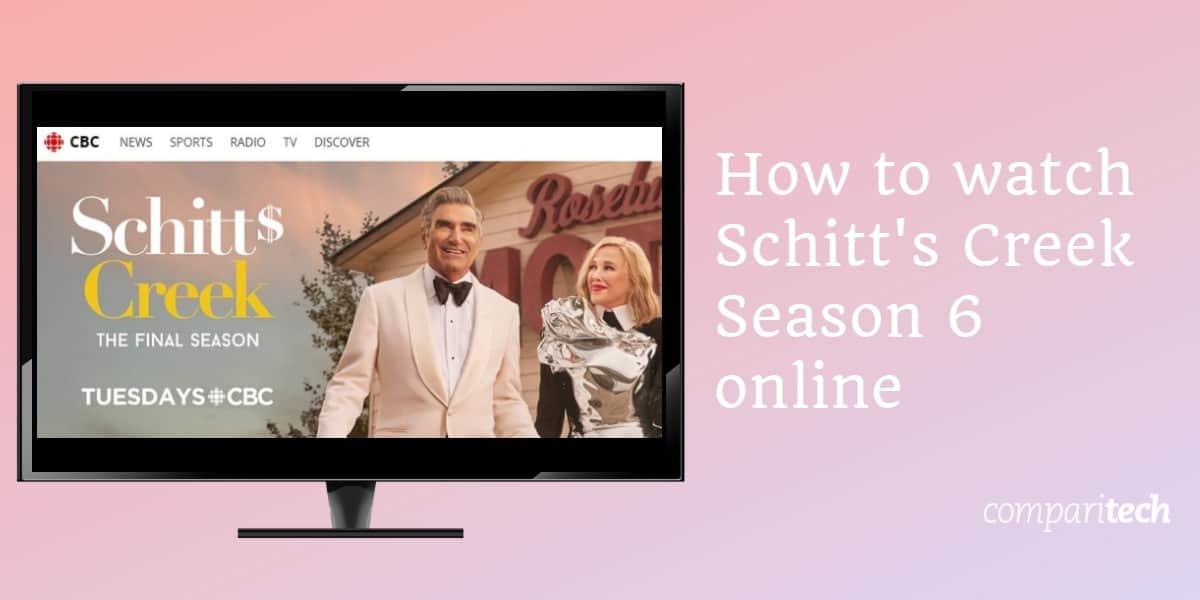 New episodes of Schitt’s Creek will air every Tuesday evening at 9 PM EST (6 PM PST / 2 AM GMT). There’ll be fourteen episodes in total, which means that we can expect this season to end sometime in April. While the sixth season has actually already begun, there’s no need to worry since below, we’ll explain exactly how you can catch up and live stream Schitt’s Creek from abroad.

You should note that we’ll only be recommending official Schitt’s Creek broadcasters. Although unlicensed streams will almost certainly be available, we advise against using these. Not only do they often provide inferior quality video, but they can also be taken down at a moment’s notice for violating copyright. The good news is that you can watch Schitt’s Creek season six for free online, so there’s simply no need for third-party streams.

Schitt’s Creek will only be broadcast on region-locked streaming platforms. If you’re traveling abroad (and there’s no official broadcaster where you are), you’ll need a VPN to watch the new season.

Most geo-blocked services get the user’s location from their IP address. If you’re connected to a VPN, though, only the server’s IP address is visible. This makes it easy to spoof your location and access region-locked platforms abroad. Follow the steps below to unblock Schitt’s Creek while traveling.

A new episode from Schitt’s Creek season six airs live every week, so we recommend taking a few minutes to make sure your VPN works properly ahead of time. This gives you more than enough time to get help with any problems and ensures you won’t have to miss the start of an episode.

CBC has exclusive broadcasting rights to Schitt’s Creek in Canada. This is great since it means fans can stream the new season online for free on CBC Gem. You’ll be able to watch new episodes live, but don’t worry if you have other plans, since they’ll be added to the service’s on-demand library a few hours after airing. Better still, CBC Gem’s library currently offers every previous season of Schitt’s Creek (although you need to create a free account to watch older episodes).

CBC Gem is region-locked, so you’ll have to be in Canada or using a VPN to access it. Don’t have a VPN yet? ExpressVPN includes a 30-day money-back guarantee, meaning you can stream the new season risk-free and claim a full refund if you’re not satisfied.

Where else can I watch Schitt’s Creek season 6 online?

Given how popular this show is, it should come as little surprise that it’s airing in more than one country. Take a look below to find out which networks are showing season six of Schitt’s Creek where you are:

Pop TV is broadcasting Schitt’s Creek season six in the US. You can watch any episode from any season for free on-demand but if you’d rather stream this show live, you’ll have to log in with your cable TV provider details.

Want to live stream Schitt’s Creek without cable? Luckily, you can also sign in with several over-the-top streaming platforms. These include Hulu with Live TV, fuboTV, AT&T TV Now, and YouTube TV. Although each of these services comes with a free trial, none is long enough to watch the entire sixth season, so if you can wait an extra few hours each week, it’ll be far less expensive to just watch on-demand.

You should note that all of the above services are region-locked. However, it’s possible to access them from outside of the US using an American VPN server.

Unfortunately, there are no concrete details as to when Schitt’s Creek season six will be released outside of North America. Further, the release schedule varies from one region to another. For instance, prior seasons tended to arrive in the UK during May, but Australian fans couldn’t watch until a few months later.

Schitt’s Creek season 6: cast, rumors, and what to expect

Let’s start by addressing the elephant in the room: yes, this will be the final season of Schitt’s Creek. There is a silver lining, though: it wasn’t canceled, which means we don’t have to worry about a rushed, half-baked ending.

So what can fans look forward to in season six? Well, all of the main cast are returning, including Catherine O’Hara and Eugene Levy as Moira and Johnny. What’s more, Dan Levy has claimed that there are a few “really big ensemble scenes.” Given the show’s Instagram account recently posted a photo of rings, it looks like a safe bet to assume we’ll finally get to see David and Patrick’s wedding.