How to unblock websites (and apps) from anywhere

Trying to access websites or apps that are blocked in your country, workplace, or school? Read on to find out how to access any website from anywhere, using a Virtual Private Network (VPN).
Ian Garland Streaming, Kodi and VPN Expert 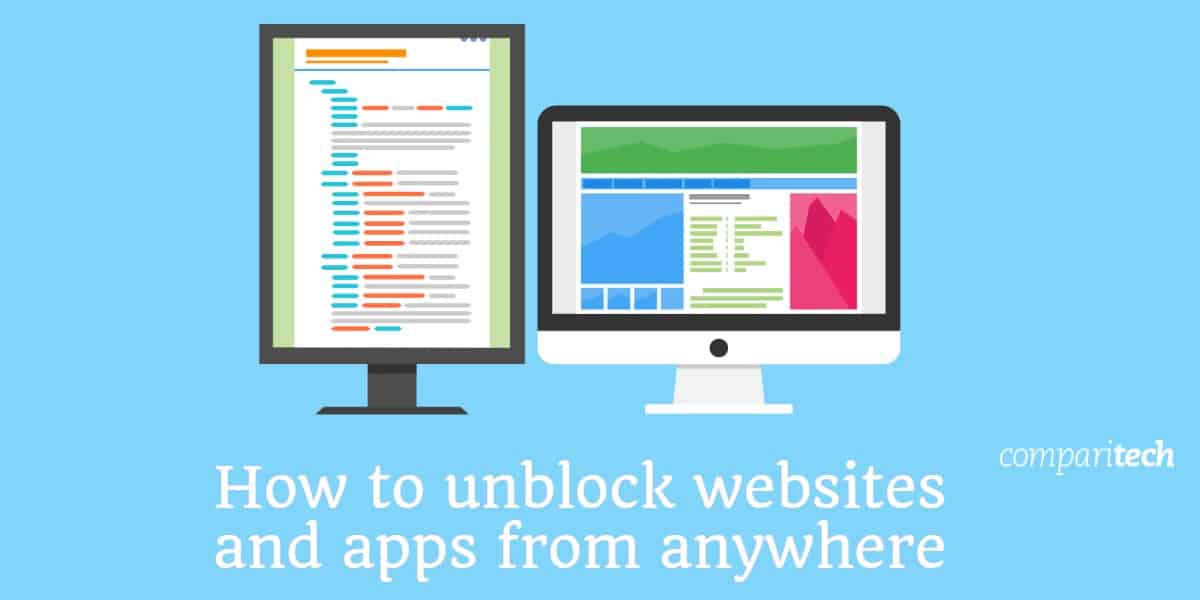 There are plenty of reasons you might need to unblock a particular website or service. Perhaps your employer uses over-zealous web-filtering software. Maybe a streaming service is only available in one specific country. It could even be that your country’s government doesn’t want you to read information that paints it in a negative light. In most cases, though, it’s actually quite simple to bypass online blocking: just connect to a Virtual Private Network (VPN).

VPNs route your traffic through a server elsewhere in the world. This gives you a new, temporary IP address that points to the country your chosen server is in and enables you to beat most kinds of location-based blocking. Additionally, VPN servers don’t have the same internet restrictions that your workplace (or indeed, country) does, so you’ll be able to access any site or service you like.

Equally important, VPNs encrypt your traffic. This prevents it from being read by snoopers such as the government, your Internet Service Provider (ISP), or your workplace’s network administrators. Unsurprisingly, this is incredibly useful in countries with strict online censorship.

How to unblock websites from anywhere with a VPN

VPNs might seem a little intimidating but they’re actually quite easy to use. Setting up a VPN takes only a few minutes and then you will have access to apps and websites from all over the world.

Here’s how to unblock websites from anywhere:

If problems persist, we’d recommend contacting your VPN’s customer support team for further help. It may be that there are specific servers capable of unblocking your chosen service.

How does online blocking work?

Generally, there are two different ways that organizations can restrict access to a particular website or service. We’ll cover each of these in more detail below:

Countries like China and the UAE use similar technology, although on a larger scale. This kind of country-wide censorship is significantly more advanced, though, and usually includes some form of keyword-based filtering as well as proxy-detection features.

User-based blocking is when organizations look at things like the user’s IP address, GPS location, or phone number to determine whether they’re allowed to use a given service. This is most commonly seen with online streaming services. YouTube TV, for instance, is only available in the US and users from other countries are prevented from signing up.

Although you can easily access most user-based blocking with a VPN, more advanced systems are almost impossible to bypass. For example, you might need a form of ID that only a resident would have or a payment method that’s linked to an address in a particular country.

Will a VPN let me access blocked sites when in China?

China has some of the most advanced internet restriction technology in the world, collectively known as the Great Firewall. Additionally, the government and local ISPs have specifically targeted VPN providers, meaning the majority of services won’t work.

There are a few VPNs that still work in China, but as their websites are inaccessible from the mainland, you’ll have to install them before arriving. We’d also recommend saving manual installation instructions, just in case you run into connection problems when you’re in China.

There’s no publicly-available list of every website that’s banned in China. That said, you can use our Great Firewall tool to find out if a particular site or service is accessible or not.

Can I use region-locked services with a free VPN?

We advise against using free VPNs in general. To begin with, these services are often the first to be blacklisted by major services, meaning there’s no guarantee they’ll work. Further, they often have more users than their networks can support. As a result, even if your VPN unblocks a particular service, you’ll likely find your browsing speeds too slow to use it. This is a real problem if you’re looking to stream since slow speeds result in choppy playback and frequent buffering.

It’s also worth mentioning that free VPNs pose a real security risk. In fact, one study found that almost 40 percent of 280+ surveyed apps contained malware. As if that wasn’t bad enough, 18 percent used no encryption, so they provided no privacy whatsoever. This means that unless you’re especially lucky, there’s a real chance of you infecting your device (and possibly your employer’s whole network) with malware.

The best way to unblock services and browse anonymously is to use a reputable, privacy-conscious VPN that follows a no-logs policy.

Why isn’t my VPN unblocking a certain website or app?

Unfortunately, given the sheer variety and complexity of blocking systems, there will always be some services that your VPN cannot unblock. However, every website and app is different; for instance, a local TV station’s website will probably have less-stringent restrictions than an internationally renowned household name like Netflix.

Don’t worry if you still can’t unblock a particular service. It might be that only certain servers are able to bypass the VPN-detection on your chosen service, or perhaps you just have to change the connection protocol. Either way, a lot of the time, your VPN’s support team will be able to help. Most major VPNs now offer 24/7 support over live chat so you can start fixing the problem in seconds.

What kind of services can I access using a VPN?

With a VPN, there are very few limits on what you can access, even if you’re in a country with strict online censorship. Below, we’ve listed some of the types of content you can unblock abroad or at work using a VPN: