Have you bought a Smart TV only to find that you can’t access certain apps? This problem is easily solved by using a VPN. We explain why you should always use a VPN and how to set up a VPN on your Smart TV.
Ian Garland Streaming, Kodi and VPN Expert Most Smart TVs come with a wide range of apps pre-installed, but due to regional restrictions, you might not be able to use them all. Additionally, you may find that some of the apps you’d like to install aren’t available in your country’s app store. Luckily, you can change your location in a matter of minutes by connecting to a VPN.

The problem is that every Smart TV is different. While some allow unrestricted access to popular app stores, others only come with a handful of pre-approved apps and make it difficult to install anything new, including VPNs. Don’t worry, though: we’ll walk you through the process of installing a VPN on your Smart TV step-by-step so that you can stream safely and use geo-blocked apps from anywhere.

Best VPNs for use with Smart TV

Before we guide you through how to set up a VPN for Smart TV, here’s a quick rundown of the VPNs we believe are best suited for the job:

How to install a VPN on most Smart TVs

Newer Smart TVs tend to use Android, which makes installing a VPN very simple. In fact, the process is essentially the same as installing an app on your phone or tablet.

Here’s how to set-up a VPN for a Smart TV:

NordVPN is offering a fully-featured risk-free 30-day trial if you sign up at this page. You can use a top-rated VPN without any restrictions for a month. This is perfect if you want to see exactly what apps a VPN can unblock on your TV before you commit.

If you have an older Smart TV or one from a lesser-known brand like HiSense, Magnavox, or Westinghouse, you’re unlikely to have access to the Google Play Store. Below, we’ll explore a few ways to install a VPN on your Smart TV, regardless of its brand or the available app store:

Method 1: How to share a VPN connection over Ethernet

The quickest and easiest way to share your VPN connection is to run an Ethernet cable from one device to another. This isn’t the most practical method, but if you only use region-locked apps occasionally, it’s likely the best option. If you’d prefer, you could also store a smaller device like a Raspberry Pi behind your TV, which would remove the need for long, trailing cables.

VPN over Ethernet on Windows 10 VPN over Ethernet on MacOS

If you stream frequently, you probably won’t want to run long cables from one device to another whenever you’d like to watch something. The good news is that you don’t have to since you can share a VPN connection over wifi.

VPN over wifi on Windows 10 In older versions of Windows, you had to manually create a virtual router to share your connection over wifi. In Windows 10, however, things are much simpler:

VPN over wifi on MacOS

Method 3: How to install a VPN on your home router 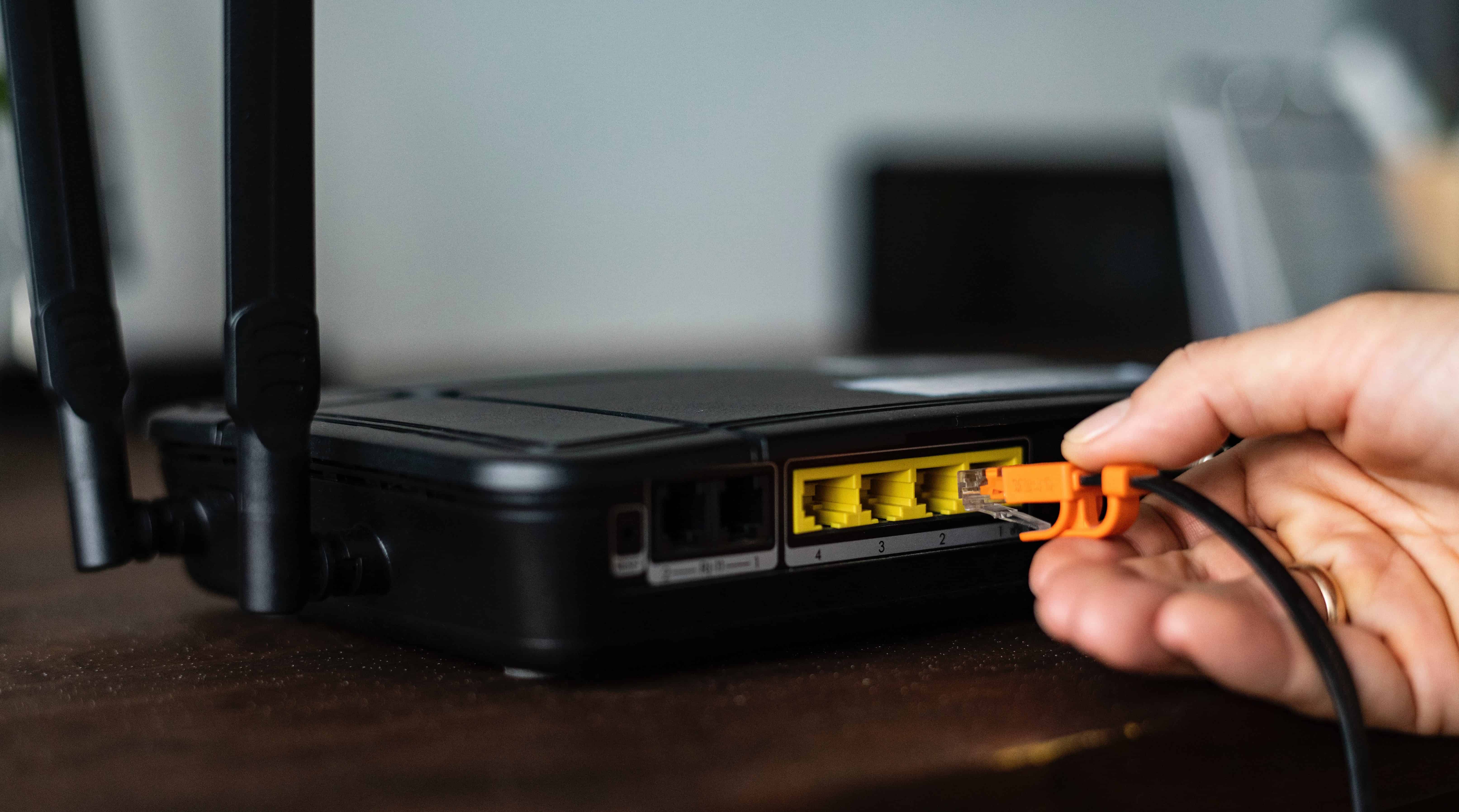 If you’d prefer, you can install a VPN on your router to automatically protect all of your devices. However, you should note that this can be a fairly involved process unless your router already has compatible firmware. Further, incorrectly upgrading your firmware can effectively break your router.

For this reason, it’s vital that you follow the setup instructions exactly. Most major VPN providers provide detailed walkthroughs for the most common router types, and we’ve linked a few of these below:

It’s also possible to buy a pre-configured VPN router that provides you with a plug-and-play solution. These come with the VPN already installed on the router, so all you have to do is select a server to connect. Companies like FlashRouters will happily sell you routers that are already set up to work with just about any major VPN service. Also, ExpressVPN provides custom firmware that makes it very easy to install on your router.

Mistakes to avoid when installing a VPN on your Smart TV

If you follow the steps above, you shouldn’t have any problems getting your VPN to work with a Smart TV. However, if you’d rather figure things out for yourself, there are a couple of potential pitfalls to look out for:

1. Don’t try and install Android apps on a non-Android system

If you’ve read our guides to installing VPNs on Amazon Fire TV, you might be tempted to download your VPN’s .APK file and install it manually. However, we don’t recommend this approach for Smart TVs.

In the best-case scenario, your TV uses a supported version of Android and everything works as intended. Newer TVs usually let you access the Google Play Store, though, making manual installation unnecessary.

But what if your TV uses a different operating system? Most likely, you won’t be able to install the .APK file, so it’ll just be taking up space. It’s also possible that attempting to install an unsupported app could “brick” your TV, leaving it inoperable. Worse, as you’ve tried to modify it, it might not even be covered under its warranty anymore.

Some providers (including NordVPN) let you use Smart DNS services to bypass regional restrictions simply by changing your device’s DNS settings. There are a couple of problems with these, though. First, they don’t encrypt your traffic, meaning your ISP can still tell if you’re streaming. Considering some ISPs throttle your network speeds if you stream frequently, this is a real problem.

Further, most Smart DNS services only allow you to connect to one location (usually the US). In contrast, the corresponding VPN apps often let you use servers in dozens of countries, greatly increasing their ability to unblock geo-restricted services.

3. Don’t be afraid to ask for help if you’re having problems

We get it: it’s frustrating to start a project and realize you’re in over your head. That said, would you rather spend several days trying to work out what has gone wrong, or ask your VPN’s customer support team for help and have an answer within a few minutes?

Many major VPNs offer 24/7 live chat, and their support representatives deal with router configuration and other networking problems every single day. If you’re struggling, we strongly recommend contacting them.

Can I use a free VPN on my Smart TV?

While you can technically install a free VPN on your Smart TV, we advise against it. To begin with, these services often have very limited networks and high numbers of users. This means they’re unlikely to be able to provide the high speeds required for HD streaming. Further, free VPNs are usually the first to be blacklisted by major services like Netflix, and as such, you might not be able to watch anything even if you find a reasonably fast free VPN.

You should also consider the security implications of using a free VPN. A recent survey of over 280 such apps for Android (the platform most newer Smart TVs run on) found that more than 80% were vulnerable to IPv6 leaks, almost 20% used no encryption at all, and 37% contained malware.

Unfortunately, well-known providers aren’t necessarily any safer. We’ve seen major services like Hola abuse their users’ trust by selling their bandwidth out from under them to help run a botnet. The best way to stay safe when streaming is to use a reputable VPN with a clear-cut, user-first privacy policy.

Which Smart TV apps can a VPN unblock?

With the right VPN, you’ll be able to access geo-restricted services from all over the world. Here are a few of the most popular apps you can unblock with a VPN on your Smart TV:

Aside from using a VPN with your Smart TV, you can use it with your desktop and mobile devices and even your wifi router (the best VPNs allow multiple simultaneous connections). One of the most popular use cases for using a VPN is to bypass geographic restrictions, most commonly when it comes to streaming services. This allows you to continue to watch your favorite online content in your preferred language even if you’re traveling abroad.

However, a VPN doesn’t just allow you to access more websites and services. It also ensures you can browse and stream securely by encrypting your internet traffic. In hiding your IP address and physical location, it protects your privacy. For example, your ISP will no longer be able to see what you’re doing online. The best VPNs also operate no-logs policies which means that they don’t keep any logs by which you can be identified as a user.

How do I change my Netflix region on my Smart TV?

Regardless of how your VPN is set up on your Smart TV, the process of how you change your Netflix region remains the same. It requires connecting to a VPN server in a region that’s different to your current physical location. Doing so changes your IP address and spoofs your location, changing the Netflix region as a result. Note that this should also work with other streaming services, be it Amazon Prime Video or BBC iPlayer.

Can a VPN cause software issues on my Smart TV?

Most Smart TVs don't support VPN apps but don't worry: you can just share your connection from another device or connect the TV to a VPN-protected router. This takes a little bit of setup but once you're done, it'll allow you to secure traffic to and from your TV without worrying about software issues.

You're only really likely to experience problems if you start trying to circumvent the TV's limitations. Don't be tempted to try and sideload a VPN app (or any other) onto a Smart TV -- they often use non-standard operating systems which means there's a good chance you'll end up with a completely unusable and unfixable device if something goes wrong.