WhatsApp is banned in Turkey but users living in or visiting the country can still access the platform using a VPN. We reveal the best VPNs for WhatsApp in Turkey and explain how to use them to bypass the restrictions.
Aimee O'Driscoll VPN AND CYBERSECURITY EXPERT 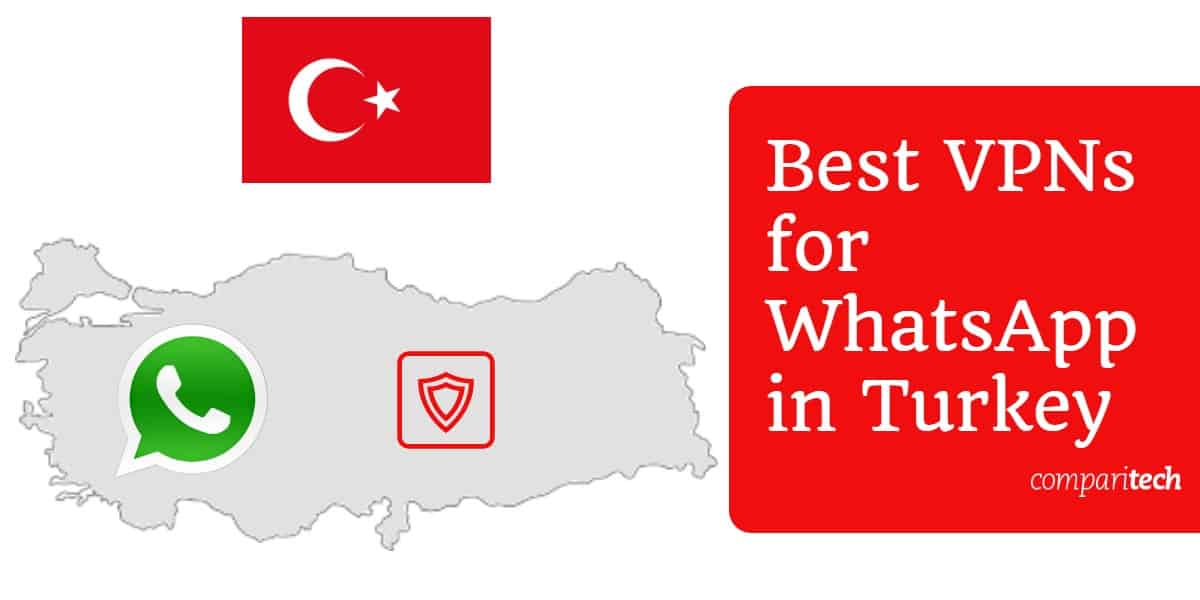 WhatsApp and other social media platforms have been blocked in Turkey on several occasions, forcing internet service providers (ISPs) to implement the restrictions on behalf of the government. This is disappointing to anyone living in or visiting the country who wants to use the app to stay in touch with friends, family, and colleagues. Luckily, there is a way to bypass the block and use WhatsApp in Turkey as if you were outside the country: use a WhatsApp VPN.

Short for Virtual Private Network, a VPN encrypts your internet traffic and routes it through a server in another location (that you choose). This means that your ISP and any other snoopers can’t read the contents of your traffic or see where it’s going, enabling you access to otherwise blocked sites. Some VPNs are blocked by the Turkish government, but others still work reliably.

We’ll discuss these in more detail below, but here’s a quick rundown of our favorite VPNs for WhatsApp in Turkey.

There’s a huge selection of VPNs to choose from, but not all work in Turkey to unblock WhatsApp. Those that do aren’t all cut from the same cloth, and differ on factors such as speed and security. We chose our best VPNs for WhatsApp in Turkey based on the following criteria:

Best VPNs for WhatsApp in Turkey

Here’s our list of the best VPNs for WhatsApp in Turkey:

ExpressVPN is the best option for unblocking WhatsApp in Turkey. It operates a network of over 2,000 servers in 94 countries and has an excellent reputation for evading government censorship across the globe, including in Turkey. ExpressVPN will help you access all your favorite apps from within the country, including WhatsApp, Skype, and Twitter. It’s also great at unblocking streaming platforms such as Netflix, Amazon Prime Video, and Hulu. Speeds are blazing fast for VoIP calling and support is available around the clock should you need any help.

This provider uses 256-bit encryption in conjunction with perfect forward secrecy and provides protection against DNS, WebRTC, and IPv6 leaks. A kill switch is built into the desktop apps. ExpressVPN doesn’t keep logs of information that could be used to identify you.

Native apps are provided for Linux, Windows, MacOS, iOS, and Android. ExpressVPN has recently upped its connection limit to five devices at a time.

BEST VPN FOR TURKEY:ExpressVPN is our top pick for WhatsApp in Turkey. This VPN is fast, secure, and reliable, and comes with excellent customer support. Plans include a risk-free 30-day money-back guarantee.

Check out the full ExpressVPN review.

NordVPN is a budget provider running a very large network (over 5,600 servers in 60 countries). One of its main selling points is its ability to bypass censorship and geo-restriction measures. It works across the globe, including in Turkey, China, and other countries that impose VPN blocks, so you can access WhatsApp, Skype, and other communication apps from anywhere. It also helps you access multiple Netflix libraries, Hulu, Amazon Prime Video, and more. Live-chat support is always available to help.

Another attractive aspect of this VPN is its suite of security features. Aside from military-grade encryption, leak protection, and a kill switch (in all apps except Android), you get automatic wifi protection, the option of double VPN, and malware protection. NordVPN never records any traffic or connection data.

Apps are available for Windows, Linux, MacOS, iOS, and Android, and you’re allowed up to six simultaneous connections under each plan.

BUDGET VPN:NordVPN is an excellent budget choice for users looking for a secure connection and plenty of server options. It keeps no logs and protects your data with multiple security features. A 30-day refund policy is in effect.

Hotspot Shield is investing heavily in its service these days and is proving itself as a strong contender for many use cases, including unlocking censored content. With over 3,000 servers in more than 70 countries, you’ll have no issues finding one that works with WhatsApp in Turkey. This provider is also adept at unblocking plenty of streaming platforms, such as Netflix and Hulu.

Hotspot Shield uses its proprietary Catapult Hydra protocol, which ensures you have blazing fast speeds no matter where you’re located. Security features include strong encryption, protection against leaks, a kill switch in the Windows app, and perfect forward secrecy. This service does log your IP address in an encrypted format while you’re connected, but it disposes of this information as soon as you disconnect.

Desktop clients are available for Windows and MacOS, and mobile apps can be downloaded for iOS and Android. You can connect up to five devices at a time under one plan.

Check out the full review of Hotspot Shield.

Surfshark has been gaining an excellent reputation in the industry. Its network comprises around 1,000 servers in over 60 countries and you can use NoBorders mode to access WhatsApp and other blocked apps while in Turkey. Surfshark will also enable you to watch shows and movies on your favorite streaming platforms, including Netflix.

Security features include 256-bit encryption, perfect forward secrecy, a kill switch in all apps, and protection against DNS, IPv6, and WebRTC leaks. Extras include split tunneling, malware protection, and multihop VPN. No logs are kept.

Apps are available for MacOS, Linux, Windows, iOS, and Android. A big plus with this VPN is that you can connect as many devices as you like under one plan.

USE ON ALL DEVICES:Surfshark is a solid performer when it comes to evading government blocks, and you can use it to cover all of your devices. Plans include a 30-day money-back guarantee.

PrivateVPN has a much smaller network (150 servers in 60 countries) than the other providers on this list, but it still manages to keep up from a performance standpoint. This service works reliably, even in countries where VPN blocks are imposed, including Turkey and China. It will assist you in unblocking WhatsApp and other apps, and can help you access streaming and gaming sites too. If it doesn’t work out of the box, you can use the “Stealth VPN” feature, which is designed to bypass blocks. Live chat support is available at most times of the day.

This provider doesn’t disappoint on the privacy and security front. It uses 256-bit encryption alongside perfect forward secrecy and protection against DNS, IPv6, and WebRTC leaks are built-in. The Windows app includes a kill switch. PrivateVPN keeps no logs whatsoever.

You can use this service on six devices at a time, and download apps for Windows, MacOS, Android, and iOS.

Read the full review of PrivateVPN.

Can I use a free VPN for WhatsApp in Turkey?

In short, no. To start, a free VPN likely won’t work in Turkey to unblock WhatsApp. Free VPNs don’t have the resources to invest in the technology required to evade government censorship, so your connection will likely be detected and blocked.

Even if you do manage to find a free VPN that works in Turkey, there are other issues you’ll have to deal with. Their connections tend to be painfully slow and subject to dropping at any time. You’ll also have low data caps and bandwidth limits, so VoIP calling is probably a no-go.

These services still need to make money and often resort to shady tactics to do so. While some simply bombard you with annoying ads, others track your browsing history and other data, They then use this for advertising purposes or sell it to the highest bidder.

Aside from violating your privacy, many free VPNs dupe you in other ways. While they claim to secure your VPN traffic, some use weak encryption while others don’t actually encrypt your traffic at all. And if you’re looking for features like a kill switch and leak protection, you’ll need to look elsewhere.

For a seamless experience, you’re best off paying a small monthly fee for a full-featured VPN.

Even if you’ve never used a VPN before, getting set up is simple. Just follow the steps below and you’ll be making WhatsApp calls from Turkey in no time.

Here’s how to access WhatsApp in Turkey with a VPN:

If you run into issues, consult your VPN knowledge base or customer support team for help with troubleshooting. It may be that you need to connect to a different server or change the VPN settings.

Why is WhatsApp blocked in Turkey?

WhatsApp isn’t blocked in Turkey on an official or permanent basis, but it may be blocked intermittently, in particular, during times of political unrest. The most recent WhatsApp block was rolled out in early October, 2019. Users in southern parts of the country reportedly had no access to WhatsApp and other apps, including Facebook, Twitter, and Instagram.

But this isn’t the first time the app has been blocked in the country. In 2016, after the arrest of 11 pro-Kurdish politicians, access to multiple social media platforms including WhatsApp, Twitter, and Facebook was stifled.

Because the Turkish government realized that people were using VPNs to bypass blocked apps, they started to target VPN providers, too. As such, many services no longer work in the country.

In February 2018, Turkey rolled out a product called PTT Messenger that was similar to WhatsApp. However, rather than celebrate the availability of a social media platform in the country, critics were concerned that the new service could be used as a surveillance tool.

Related: ExpressVPN server seized in Turkey turns up nothing in assassination case, verifying “no logs” policy