How to watch Fox News Live from abroad with a VPN

We'll show you how to watch Fox News Live from anywhere in the world by connecting to a VPN. This method works on Macbooks, PCs, Android, iOS, tablets, AppleTV, and more.
Osman Husain Tech journalist, VPN and streaming expert 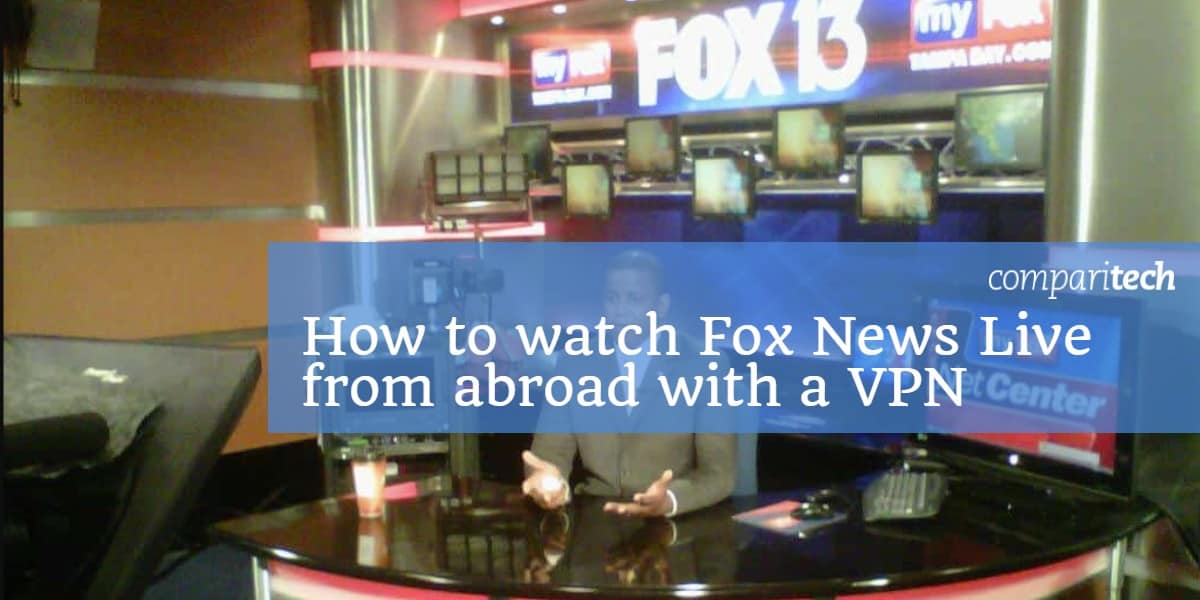 Fox News Live, also known as Fox News Go, is available online for viewers who have a cable subscription, such as a package from AT&T, Verizon, DirecTV, or Comcast. However, the caveat to this is that you must also have a US IP address to be able to log in to the service. If you log in to Fox News Live from outside the US, you’ll be allowed to stream the first 10 minutes of video before the restrictions kick in.

In order to proceed further without being blocked, you can use a Virtual Private Network (VPN). In this article, we’ll explain how to do exactly that and the best VPNs to unblock Fox News Live.

VPNs obfuscate your actual physical location by encrypting all the traffic flowing to and from your device and tunneling it via an intermediary server. Most of them ship with server locations across the globe, including the United States. Hence, a VPN will enable you to access Fox News Go from France, Canada, Australia, Spain, Japan, the UK, or anywhere else in the world.

If you don’t want to read the whole article, here are our top 5 picks for unblocking Fox News Live:

VPN services are a dime a dozen, but they don’t all fall into the same category. To help you come to a decision, we’ve compiled a list of the best VPNs that work with Fox News Live. They’ve been analyzed based on the following factors:

ExpressVPN is our top pick for unblocking Fox News Live. This is a world-class VPN provider that offers unmatched ability to thwart restrictions on content and streaming services. It’s fast to the point that you won’t notice any lag while attempting to stream HD video. With over 2,000 servers spread across the world, including plenty of options in the United States, you’re guaranteed a fast connection.

ExpressVPN doesn’t retain any personally identifiable user data and is a consistent performer when it comes to unblocking geo-restricted streams like Netflix, Hulu, BBC iPlayer, ESPN, Sky, and more. As such, it won’t have any problems unblocking Fox News Go.

Customer support via live chat is available around the clock. Apps for Windows, MacOS, Android, and iOS are available. A single connection allows for three devices to connect simultaneously.

BEST FOR FOX NEWS LIVE:ExpressVPN is our top choice due to its robust, fast speeds and ability to unblock most channels. They have many servers in the US and across the world. ExpressVPN comes with a 30 day money back guarantee, so you can try the service risk free.

NordVPN is headquartered in Panama and has been in the VPN business for over a decade. It features a server network of more than 5,000 spread across the world including a large variety in the US.

It offers dedicated servers for HD streaming and consistently bypasses restrictions on a number of streaming services, such as Netflix, Hulu, and BBC iPlayer. It adheres to a policy of not storing any data and uses best-in-class encryption standards. A single subscription allows for six simultaneous connections.

Included are apps for Windows, MacOS, iOS, and Android.

CHEAP & AFFORDABLE:NordVPN offers lots of customizable features and blazing fast speeds at a price you can’t beat. Its server network is vast and it’s great for streaming. Plans come with a 30 day money back guarantee.

CyberGhost offers a user-friendly design coupled with a reliable service. It’s an excellent choice for folks new to VPN apps and who want to take advantage of unrestricted video streaming.

At the moment, it offers more than 3,100 servers across the world with dozens hosted in the US. Superior encryption features mean you will remain safe and hidden on the internet. Some of the geo-restricted streaming services it manages to access are Netflix, Hulu, and BBC iPlayer. Additional security features include an adblocker, anti-malware defense, and anti-tracking.

A paid subscription allows for seven devices to connect concurrently. Support for Windows, MacOS, iOS, and Android is included.

IDEAL FOR NEWCOMERS:CyberGhost is fast and intuitive and gets the job done. Its app offers a step-by-step process to unblock popular geo-restricted streaming media services. 45 day money back guarantee.

IPVanish incorporates a vast server network and ships at a price that’s very affordable. Its product is different from other VPNs, most notably the fact that it owns and operates servers independently of any third party. This means its cloaking features are top-notch.

At the time of writing, this provider offers more than 1,100 servers spread across 60 countries, including over 300 servers in the United States. Some of the streaming services it unblocks easily are HBO Now and Sling TV.

IPVanish is known as a ‘no-logs’ provider, because of a policy of not storing any user data. It allows for 10 devices to connect at the same time — far more than the normal industry offering of five.

This provider is particularly popular with Kodi users because it enables them to download the Android APK directly to their device. The interface is remote control-friendly for Kodi devices that don’t have a keyboard and mouse.

TORRENTING & SECURE VPN:IPVanish is ultra-secure, quick, and a favorite with torrenters. It adheres to a no-logs policy and comes with all the bells and whistles of a modern VPN. 7 day money back guarantee.

PrivateVPN focuses on quality of connections as opposed to quantity. It has a tiny network of servers as compared to the other providers on this list. However, if your purpose is to acquire a US IP address then it will definitely do the job.

PrivateVPN is known for its ability to unblock stubborn geo-restricted video streams. Some of the services it works with are Netflix, BBC iPlayer, and ITV Hub, and there are lots more.

Should I use a free VPN to access Fox News Live?

As we’ve explained in this article, Fox News Live can only be accessed with an existing cable subscription coupled with a US IP address. You won’t be allowed to stream for an unlimited amount of time the moment you travel outside the US — even if you’re in possession of a cable subscription.

As such, you need a high-quality VPN service that effectively obfuscates your location. Even if they can unblock your stream, free VPN services don’t make the cut because they ship with poor encryption standards, little to no support for HD video streams, and data caps. And you won’t get access to customer support as and when you need it.

Such services aren’t charities and have to pay for overheads such as server maintenance, staff salaries, and office space — so you can expect invasive advertisements and other migraine-inducing methods of monetization.

Additionally, free VPN apps often come bundled with malware which is an example of the latent risk associated with such unscrupulous services.

Our recommendation is to avoid free VPNs. It’s best to invest a few dollars and get a paid VPN service for peace of mind.

How to unblock Fox News Live with a VPN

A VPN is more or less a necessity in the privacy nightmare that constitutes the internet today. As governments across the world clamp down on freedom of expression online, a VPN is usually the only recourse people have to access their favorite websites and television shows.

Using a VPN gives you peace of mind when trying to log in to banking and financial services websites and when using public wifi. Hackers can lie in wait as you connect to unsecured public networks, siphon your data, and drain funds from your account or use personal information on other cybercrimes. Using a VPN guards against such activities as your connection is encrypted and private — keeping hackers safely at bay.

Why is Fox News Live geo-restricted?

Fox News is meant for cable broadcasters within the United States. As such, if it were to allow the network to be accessed from outside the US, it’d be setting itself up for lawsuits and breach of contract. Hence the geo-restrictions in effect.

What can I stream on Fox News Go?

Some of the popular shows on Fox News are:

Other than the desktop app, Fox News Live also offers Android and iOS versions of a Fox News Go mobile app to stream while on the go.

Apps are also available on Apple TV, Roku, Amazon Fire TV, and Google Chromecast. These devices don’t offer native support for VPN apps, so you can’t just download the software the same way you would on your PC, Macbook, or smartphone and follow the step-by-step instructions.

One way to get VPN support is by configuring it to a virtual router — this is possible because any PC with a wifi card can also transmit its own wifi signals, akin to how smartphones can set up wifi hotspots.

You may want to read our tutorials on how to set up a VPN on a virtual router for Windows and Mac devices.

If you’re looking to install a VPN on Chromecast, you can read our guide on how to do just that.

Live on WOFL Fox News Orlando by Kendrick Meek licensed under CC BY 2.0