How to watch Netflix Germany with a VPN

Can’t access Netflix Germany while traveling abroad? Netflix content is region-locked due to copyright restrictions. However, we explain how you can use a VPN to watch Netflix Germany from anywhere.
Mark Gill TECH JOURNALIST, VPN AND PRIVACY SPECIALIST 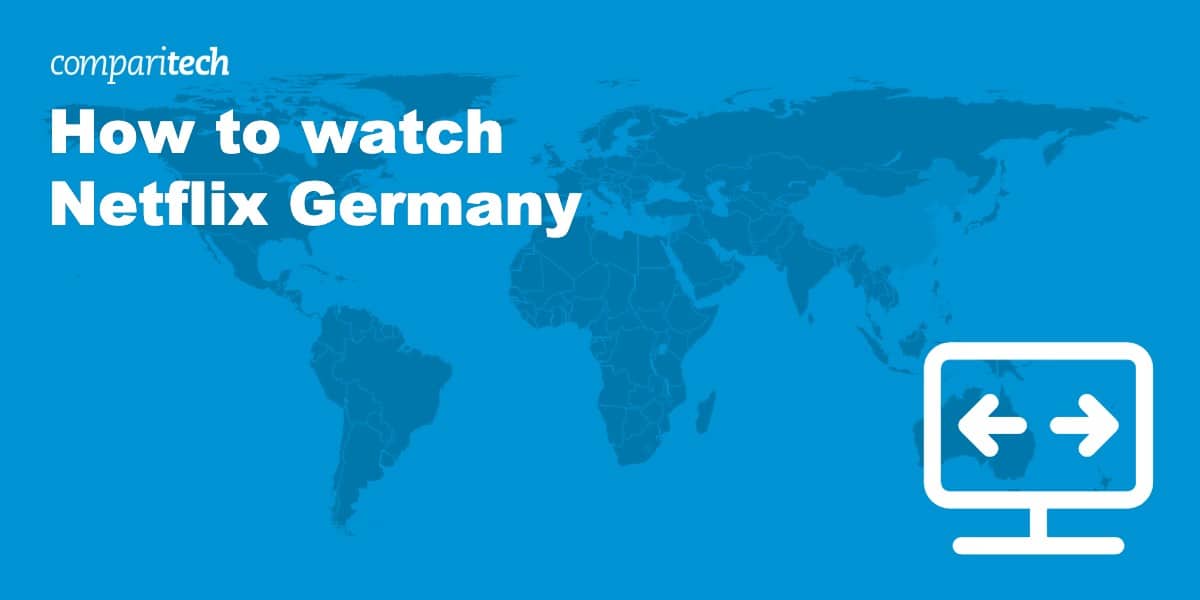 You will have found that Netflix’s content changes pretty dramatically when you travel abroad (outside of Germany). In this post, we explain how to watch Netflix Germany from anywhere with the help of a VPN. Not just any will work, though: most are unable to access Netflix, so we’ll also reveal the best VPNs to use.

A VPN takes your device’s internet traffic and routes it through an encrypted tunnel. One advantage of this (aside from the security benefits) is that connecting to a VPN server changes your IP address. It then looks as if you’re browsing from that server’s location. For example, if you connect to a server in Germany, you receive a German IP address. This should then let you watch Netflix Germany even if you’re traveling abroad.

How to watch Netflix Germany with a VPN

It shouldn’t take more than a minute or two to download a VPN, install it, and connect to one of its servers. To make things even quicker and easier, we’ve set out some step-by-step instructions below.

Here’s how to watch Netflix Germany from anywhere using a VPN:

NordVPN is offering a fully-featured risk-free 30 day trial if you sign up at this page. You can use the VPN rated #1 for Netflix Germany with no restrictions for a month - perfect if you’re outside Germany for a few weeks.

You may be wondering how we came up with our list of VPNs for watching Netflix Germany. After all, there are so many VPN providers to choose from nowadays. In order to be selected, each VPN had to fulfill the criteria as outlined below (more on our selection process later):

Below, you’ll find reviews of the best VPNs for watching Netflix Germany. Looking to make a quick decision? Below is a short summary of each.

Here’s our list of the best VPNs for Netflix Germany:

NordVPN is our top choice for watching Netflix Germany. It’s an established VPN provider with one of the largest networks of servers around. Of its 5,000+ servers, you can find well over 200 located in Germany, in the cities of Berlin and Frankfurt. Better still, fast speeds combined with unlimited bandwidth mean you won’t suffer from lag or buffering. Aside from Netflix, you can use NordVPN to stream the likes of Amazon Prime Video and Disney+.

Unlike most VPNs, NordVPN offers specialty servers including P2P, Double VPN, and Onion Over VPN. Need any help? You can always contact the 24/7 live chat and email support. There’s also a wealth of security features. This starts with a no-logs policy, 256-bit AES encryption, a kill switch, and DNS and IPv6 leak protection. More recently, NordVPN has introduced NordPass (a password manager) and NordLocker (file encryption with cloud storage).

Secure up to six of your devices simultaneously with NordVPN’s apps for Windows, Mac, Linux, Android, iOS, Amazon Fire TV, and Android TV. Chrome and Firefox browser extensions are also available. Manual setup is required to use this VPN with routers.

BEST VPN FOR NETFLIX GERMANY:NordVPN is our top choice for watching Netflix Germany. More than 200 German servers combined with fast, unthrottled speeds. P2P servers available. Secure with a strict no-logs policy. 24/7 support. Thanks to the 30-day money-back guarantee, you can try NordVPN risk-free.

Surfshark successfully works with Netflix Germany. In fact, our testers have found that it works with over 30 Netflix libraries! With more than 3,000 servers in 65 countries, this is an excellent option for accessing region-locked content worldwide. It’s also the fastest VPN we’ve used, averaging 207 Mbps in our most recent tests. Needless to say, this is ideal for streaming.

Another standout Surfshark feature is that it allows unlimited simultaneous connections. There are plenty of security features too, such as 256-bit AES encryption, protection from DNS and IPv6 leaks, and a kill switch. Notably, Surfshark offers MultiHop servers which provide an extra layer of encryption should you wish. This is a no-logs service with a feature called CleanWeb that stops ads, trackers, and malware in their tracks.

Should you choose Surfshark, you’ll be able to access apps for Windows, Mac, Android, iOS, Linux, Amazon Fire TV, and Android TV. Browser extensions are available to download for Chrome and Firefox while routers can be configured manually.

ExpressVPN has 3,000+ servers which can be found in an impressive 94 countries including Germany (Frankfurt and Nuremberg). Consistently works with Netflix Germany (and indeed many Netflix libraries), it’s a strong candidate for streaming. This is one of the faster VPNs on the market and won’t throttle your bandwidth. With a single account, you can use this VPN to simultaneously secure up to five of your devices.

Live chat and email support are available to you 24 hours per day. However, the ExpressVPN apps are particularly user-friendly. There’s even a new router dashboard interface with interactive setup guide. Its security tools include 256-bit AES encryption, protection against DNS, IPv6, and WebRTC leaks, and a kill switch. Further, this VPN is headquartered in the British Virgin Islands, meaning it isn’t subject to mandatory data retention laws. Naturally, it doesn’t keep identifying logs of its users.

CyberGhost has more servers in Germany than any other VPN listed. Of its over 7,000 servers in 90 countries, well over 800 are located in the German cities of Berlin, Dusseldorf, and Frankfurt. With so many available, server load is low across the board, allowing for consistent, high-speed connections. Unlimited bandwidth is also available so you can watch the likes of Netflix Germany (and even Netflix US) as much as you like.

With this VPN, you can secure up to seven devices at the same time — more than most of its rivals allow. CyberGhost’s strict no-logs policy offers you online anonymity which is further reinforced by 256-bit AES encryption, an automatic kill switch, and DNS and IPv6 leak protection. There’s even a new password manager which is currently in beta testing. Should you have any questions, live chat and email support is contactable around the clock.

CyberGhost provides desktop (Windows, Mac, and Linux) and mobile (Android and iOS) apps. You can also find apps for Amazon Fire TV and Android TV as well as Chrome and Firefox browser extensions. Use with wireless routers requires manual setup.

800+ SERVERS IN GERMANY:CyberGhost has over 800 servers in Germany and 7,000+ in 90 countries. Unlimited bandwidth and works Netflix Germany and Netflix US. Can be used on up to seven devices at once. Strict no-logs policy. 45-day money-back guarantee.

IPVanish has as many as 50 servers in Frankfurt, Germany. It works well with not only Netflix Germany but Netflix US (with over 1,100 of its 1,600+ servers located in the US) and made our list of overall best VPNs for Netflix. While most VPNs only let you connect a maximum of five or six devices at once, IPVanish allows unlimited simultaneous connections. With this VPN, you can expect good, consistent speeds and unlimited bandwidth, resulting in a total lack of lag and buffering.

In connecting to an IPVanish server, all of your internet traffic is kept secure from hackers with 256-bit AES encryption. DNS leak protection, OpenVPN obfuscation, and a kill switch are also available. This VPN’s no logs policy means only you know what you’re doing online. The apps allow you to automatically connect to the best available server making them particularly easy to use. However, 24/7 support is available via live chat and email should you need it.

You can use IPVanish via the apps for Windows, Mac, Android, iOS, and Amazon Fire TV. It also provides manual setup instructions should you wish to use it with Linux or your home wireless router.

UNLIMITED DEVICES:IPVanish lets you connect all of your devices at the same time. 50 servers in Germany with good, consistent speeds and no bandwidth throttling. No-logs service with 24/7 support via live chat and email. 30-day money-back guarantee.

PrivateVPN has recently expanded its network to over 200 servers which are spread across over 60 countries, Germany included. This is one of the most reliable ways to securely access streaming services. Aside from Netflix Germany, it works with Netflix US, Disney+, and HBO Max. Another advantage of PrivateVPN is its fast speeds so you can stream at 1080p or even 4K without having to worry about interruptions.

Although PrivateVPN apps are beginner-friendly, live chat and email support are available in case you run into any issues. In fact, this service even provides free remote help and installation. Its strict no-logs policy keeps your identity intact while security features include 256-bit AES encryption, DNS leak protection, and a kill switch. Little personal information is required to sign up while Bitcoin lets you anonymously pay for this VPN service.

You can get a German IP address via PrivateVPN’s apps for Windows, Mac, Android, iOS, Android TV, and Amazon Fire TV. However, it’s worth keeping in mind that you’ll need to set it up manually to use it with Linux or a compatible wifi router.

How we found the best VPNs for watching Netflix Germany

There are a number of factors to take into consideration when choosing a VPN. In this case, you obviously need a VPN that provides servers in Germany in order to watch Netflix Germany! However, you’ll also want fast speeds for streaming as well as strong security just in case you’re reliant on public wifi. Below, we outline our methodology for choosing the best VPNs for watching Netflix Germany:

While we look for all of the above in the VPNs we recommend, this is still just a small part of our full VPN testing methodology. This involves the rigorous testing of each VPN so that you receive the most accurate and up-to-date information on each.

Can I use a free VPN to watch Netflix Germany?

Most free VPNs are unable to securely access Netflix Germany. Even if you happen to find one that does, its speeds will likely be too slow for streaming. Some free VPN services throttle the bandwidth of users, limiting your ability to stream and torrent. Further, the server networks of free VPNs are typically very small. This makes securely accessing websites and services from abroad all the more challenging.

As we mentioned above, traveling abroad and using public wifi carries some risk to your online security. Free VPNs don’t offer sufficient protection in this respect. This is often due to lacking certain security features, be it encryption or a kill switch. In fact, some free VPNs log your browsing data and sell it to third parties. As such, you’re no safer using a free VPN than using no VPN at all! It’s for this reason that we only recommend the best-paid VPNs for watching Netflix Germany.

What can I watch on Netflix Germany?

Most Netflix titles are available in multiple Netflix libraries. However, the following titles are only available to watch on Netflix Germany and therefore require a German IP address via a VPN: