In the market for your first Virtual Private Network (VPN)? We’ve put two well-known services (ZenMate and NordVPN) to the test to see which is better for the average user.
Ian Garland Streaming, Kodi and VPN Expert 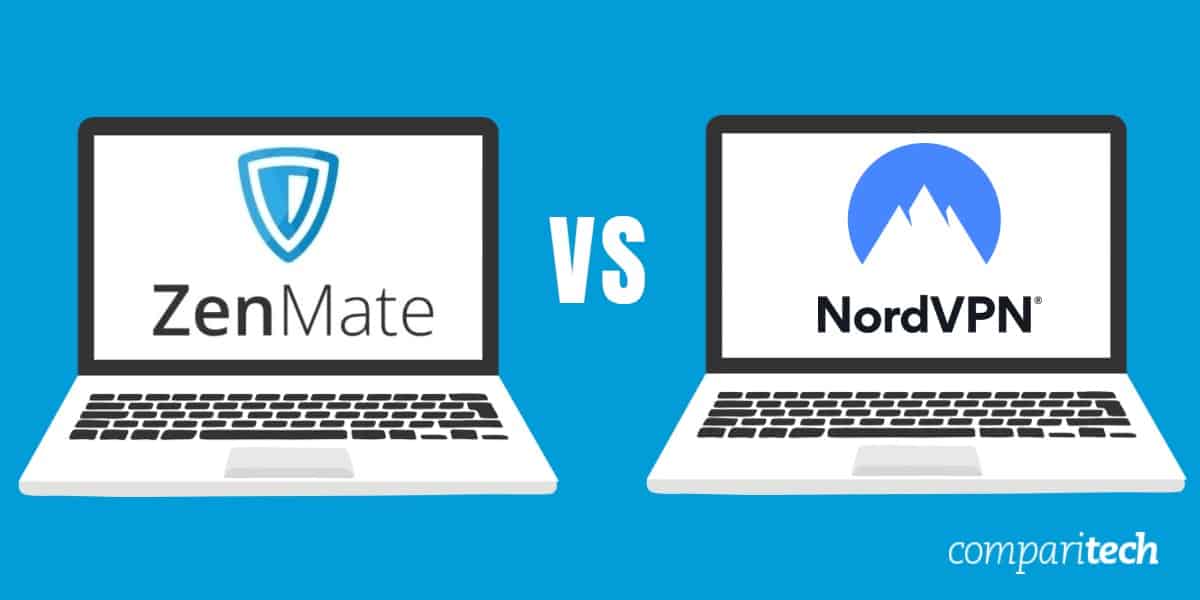 There’s no denying it: choosing a VPN can be difficult at the best of times. Providers love to mention their no-logs policies or their cutting-edge security features, but they rarely give the context needed to actually understand how these help the user. That’s where we come in.

Below, you’ll find a side-by-side comparison of ZenMate vs NordVPN. This will allow you to see at a glance which has more servers, the lowest monthly price, and much more. This guide will also explain each feature, including the impact it will have on your day-to-day internet usage. ZenMate vs. NordVPN: which is better? Read on to find out.

ZenMate and NordVPN’s monthly subscriptions are both reasonably priced, at $9.99 and $11.95 USD, respectively. That said, as these services predominantly offer long-term subscription plans (with very steep discounts), it’s clear that they don’t expect you to pay this much.

By paying for three year’s coverage in advance, NordVPN customers can effectively reduce the price to $3.49 per month. This already puts NordVPN on the lower end of the pricing spectrum. However, ZenMate manages to go even further. Its annual subscription costs $53.88, but users can pay $59 for three years of coverage instead, which brings the total monthly price down to just $1.64.

Each of these services includes a 30-day money-back guarantee, so you can try them out and get a refund if they fail to meet your expectations. Further, ZenMate includes a seven-day free trial, although it’s a little unclear as to how you can take advantage of it. Simply, if you download the app and create an account directly from the login screen, you’ll be able to use the service without providing any payment information.

Best Deal for ZenMate:Cut the price of your three-year plan to just $1.64 per month.

Best Deal for NordVPN:Get a 70% discount on your three-year subscription.

These services both have good multi-platform support, but NordVPN has the edge here. While ZenMate offers apps for all of the major operating systems, NordVPN has all of these plus a two-line installer for Linux systems.

To its credit, ZenMate has an extension for Opera, which NordVPN doesn’t, but this browser accounts for less than 3% of all internet usage so its value is somewhat limited. ZenMate also allows you to use these extensions for free, although your speeds are limited and only four locations are available. It’s important to note that these extensions only secure browser traffic and will not anonymize traffic from any of your other apps.

NordVPN includes a few features that help keep you safe while browsing. There’s a built-in ad-blocker and malware-scanner, for instance, as well as a feature that automatically activates the VPN any time you connect to an unsecured network. NordVPN also lets you connect up to six devices at once, while ZenMate has a five-connection limit.

This is where the weaknesses of an extremely low-cost VPN start to shine through. ZenMate has clearly prioritized the ability to unblock the most in-demand streaming services, but failed to account for smaller platforms. In fact, it even struggled with services like ITV Hub, which many other VPNs can access without a problem.

NordVPN, on the other hand, was able to unblock everything we threw at it, even ABC, which until recently, it had struggled with. Notably, this service unblocked significantly more Netflix libraries than ZenMate. Additionally, if you try accessing a regional library that NordVPN can’t unblock, it’ll just redirect you to the American version of the site, which means you can technically stream Netflix on any server.

ZenMate does not work reliably in China, and in fact, its support team advises against getting a paid subscription while in China. It does, however, still work in the UAE, Turkey, and Pakistan, countries with similarly restrictive internet.

NordVPN is consistently able to bypass China’s web-filtering, although there are occasional, unavoidable outages when the Great Firewall is updated. To use the internet freely in China, just navigate to Settings > Advanced > Obfuscated Servers. Now, when you return to the main screen, you’ll find a list of specially-optimized, privacy-first servers on the left-hand side.

As NordVPN’s website is blocked in mainland China, you’ll have to install the app before arriving. It’s also a good idea to save a copy of NordVPN’s manual setup instructions on your device.

ZenMate and NordVPN both offer sleek, intuitive desktop apps. In ZenMate’s interface, there’s a big connect button and a quick-select menu on the main page, as well as a pop-out window that allows you to choose a server based on its location, current load, or the service it’s best at unblocking. 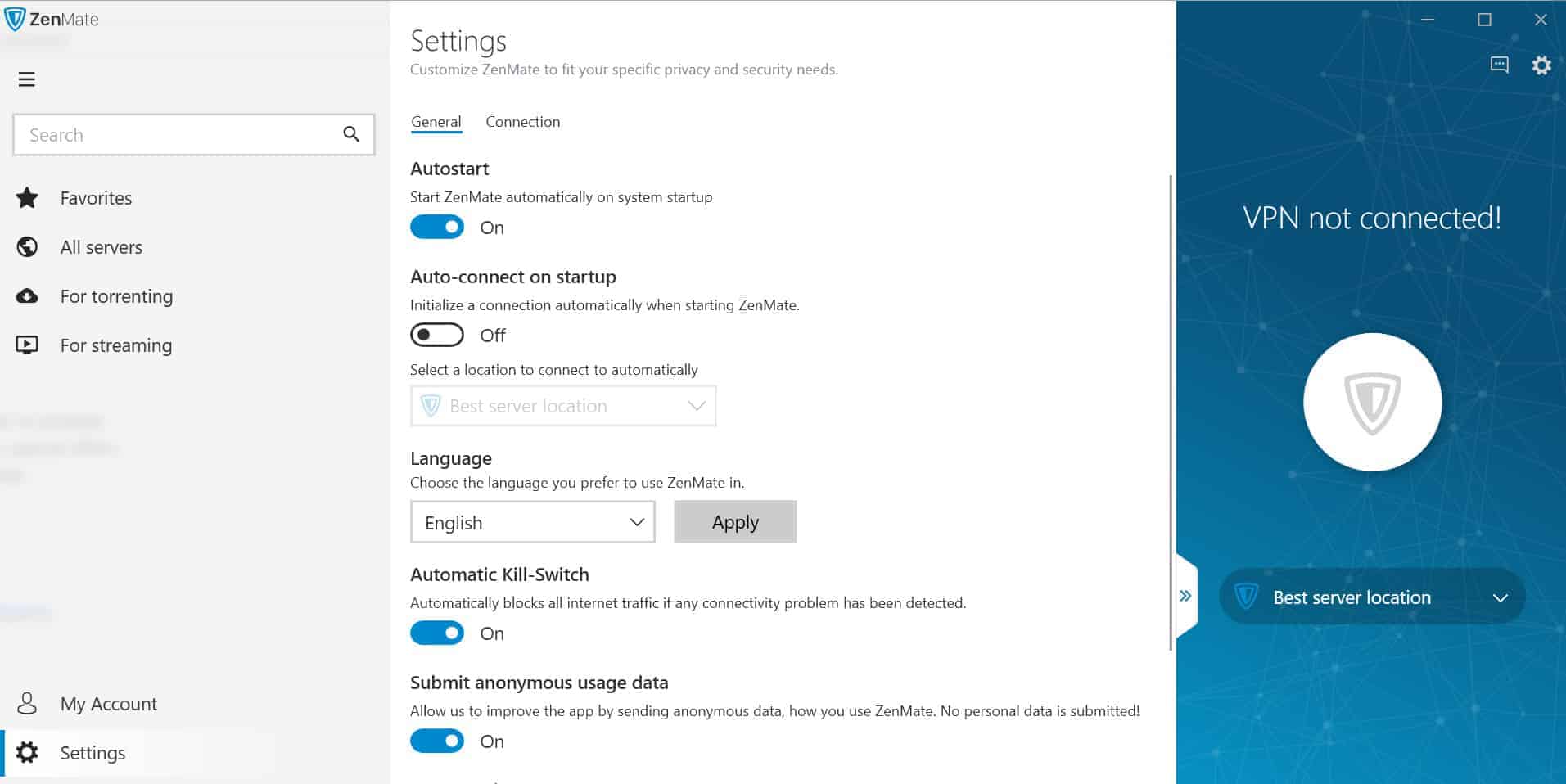 The bulk of NordVPN’s main screen is taken up by a map, but if you’d prefer, you can select a server from the list on the left. We liked that you can also choose to use obfuscated, dedicated IP, or P2P-optimized servers directly from the home screen. The settings are neatly divided into tabs, and it’s easy to find exactly what you’re looking for. 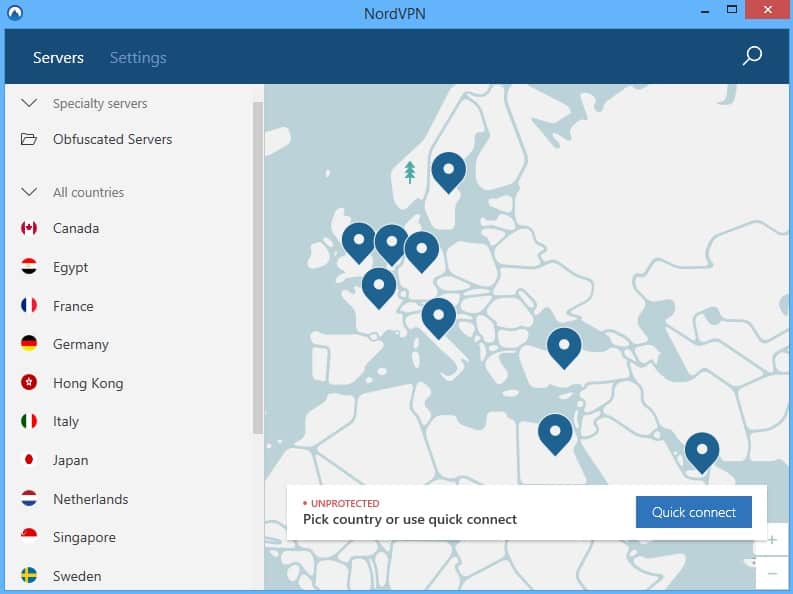 The ZenMate mobile app is minimalistic and perfectly suited to smaller screens. The quick-connect button is still there, but the server menu has been simplified, with separate tabs for general-use, favorite, or streaming-focused servers. 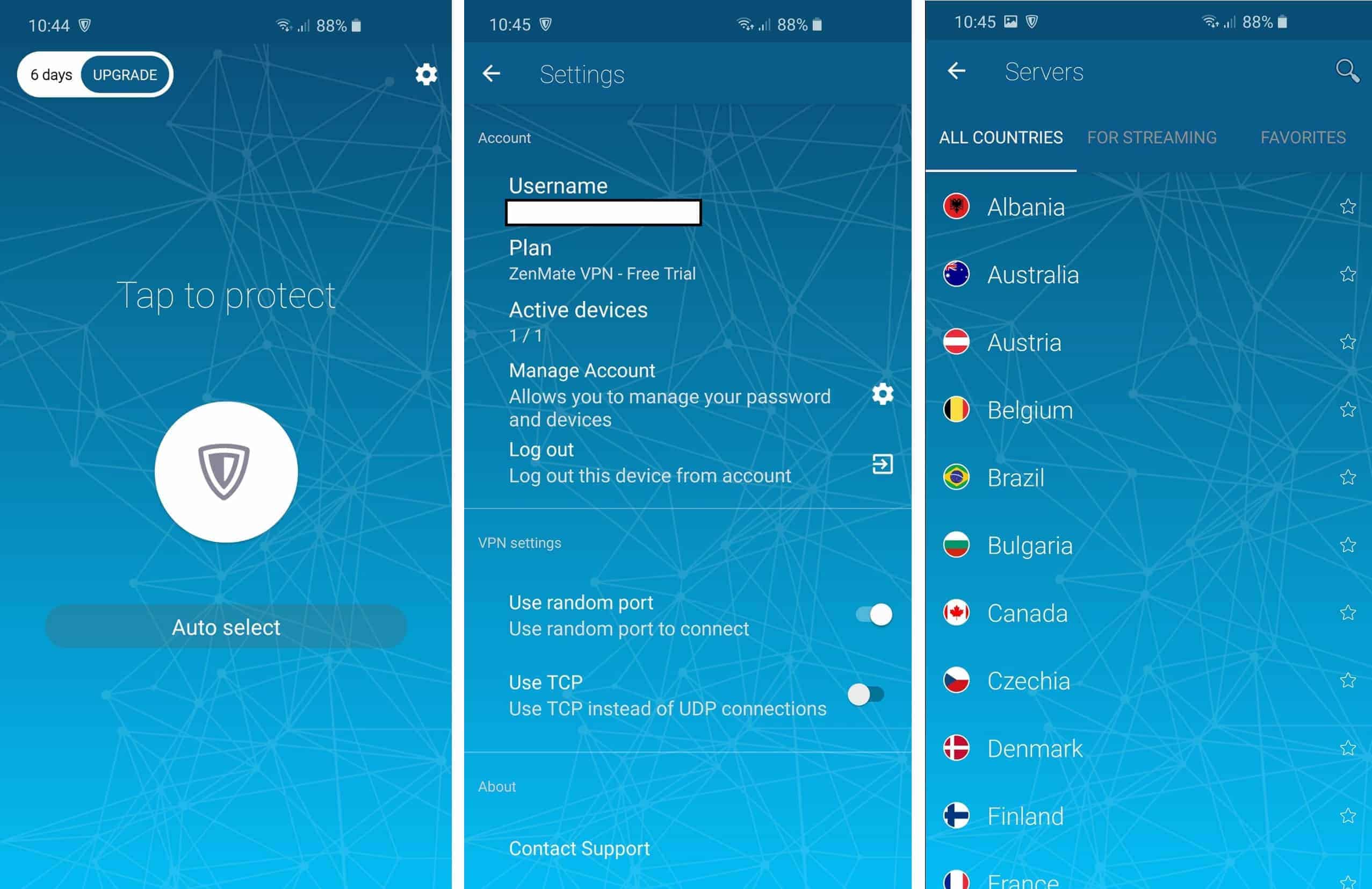 There are just two other settings: Use random port and Use TCP. The lack of options is a little disappointing when the desktop app also offers a kill switch, DNS and IPV6 leak protection, and the ability to connect automatically. Also, the app permanently displays a “ZenMate is not connected” notification in your phone’s taskbar, which is unnecessary and a little annoying. 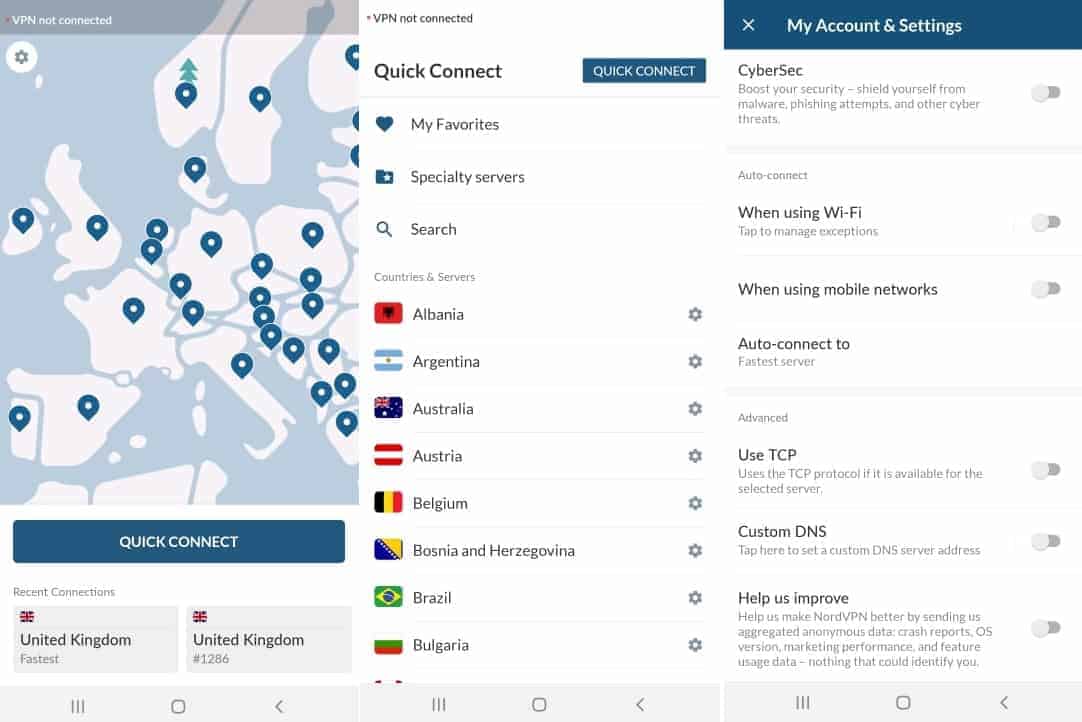 NordVPN’s mobile app is very similar to its desktop version, although the server list is beneath the quick-connect button instead of to the left. It also maintains most of its functionality, with split tunneling, malware-scanning, and automatic wifi protection available via the settings menu. In addition, you can still use obfuscated servers within the mobile app.

NordVPN wins decisively in this category. It has the second-largest network of any major provider (after CyberGhost), and offers servers in over a dozen more countries than ZenMate does. However, it has as few as two servers in some locations (Macedonia, Chile, Hungary), whereas ZenMate has at least nine in each country, and larger clusters in places like Germany, Romania, the UK, and the US.

These two services have similar speeds, averaging around 32Mbps. This is fine for everyday browsing and HD streaming (perhaps even 4K streaming, depending on your connection) but ultimately, there are faster VPNs on the market. With more servers, it should be easier for NordVPN to handle an increased load at peak times, though, which in turn, helps get you the fastest possible connection.

Read on to see where each of these VPNs have servers:

ZenMate has servers in two countries that NordVPN doesn’t: Lithuania, which is fine, and Russia, which potentially poses a real problem. Most major VPNs pulled out of Russia in 2019 due to a new law that requires providers to allow the Russian government access to their servers.

Unless these are virtual servers that are actually located in a different country (and there’s no evidence to suggest this), there’s no guarantee that they’re safe from prying eyes. However, ZenMate support assures me that this isn’t an issue given the company’s no-logging policy.

Both VPNs allow users to connect via the OpenVPN protocols (TCP and UDP). ZenMate also has the option to use IKEv2, which is faster than either of these. NordVPN does allow IKEv2 connections, but these have to be set up manually.

ZenMate and NordVPN have similar security offerings. For instance, they both secure your traffic using effectively uncrackable 256-bit encryption and 4096-bit RSA keys. They also both offer a kill switch, which stops sending data immediately whenever your connection to the VPN drops, although this feature isn’t available in NordVPN’s Android app.

Each service has its own way of bypassing VPN-blocking. ZenMate lets users connect via a random port, rather than the standard HTTPS port. This means that it can effectively sneak encrypted traffic in via a route that some firewalls won’t expect. NordVPN, however, uses Obfsproxy. This changes how your traffic looks and helps hide the fact that you’re using a VPN at all, even in countries that use deep packet inspection.

NordVPN is based in Panama. This means it isn’t legally obligated to keep logs of user data. Accordingly, this service doesn’t keep any logs at all, not even temporarily.

Since ZenMate is based in Germany, the rules are a little different. This country is part of the 14 Eyes intelligence alliance, which means that you can effectively be surveilled by any of the other 13 signatories and that your data can be freely shared among them. ZenMate sidesteps this issue by refusing to keep any personally identifiable data.

If we had to find a complaint, it’d be that ZenMate’s privacy policy is overly complex. This kind of legal jargon is most often used by services that want you to think they’re more secure than they actually are. ZenMate actually has a solid, privacy-first logging policy, though, so this just comes across as unnecessary.

These VPNs both use shared address allocation. This means that everyone who connects to a given server shares the same IP address. This helps add another layer of protection since an observer would find it impossible to tell which user visited which site. They also include a NAT firewall. This essentially monitors all incoming network traffic and filters out any packets of information that seem suspicious.

NordVPN allows you to pay for a dedicated IP address in the US, the UK, Germany, France, or the Netherlands. These cost an extra $5.83 per month but ensure that you have exclusive access to the same IP address every time you connect.

Both ZenMate and NordVPN make it easy to get help with searchable knowledge bases and video setup guides on their respective YouTube channels. They each offer live chat-based support too. However, while ZenMate’s claims to be available 24/7, we were unable to access it over the weekend. Each service replied to us in under a minute when contacted via live chat.

We wanted to find out how easy it is to get help if you cannot access live chat. Perhaps you’re in China, or the service is temporarily unavailable. To test this, we sent both providers three questions over email. Take a look below for the results: 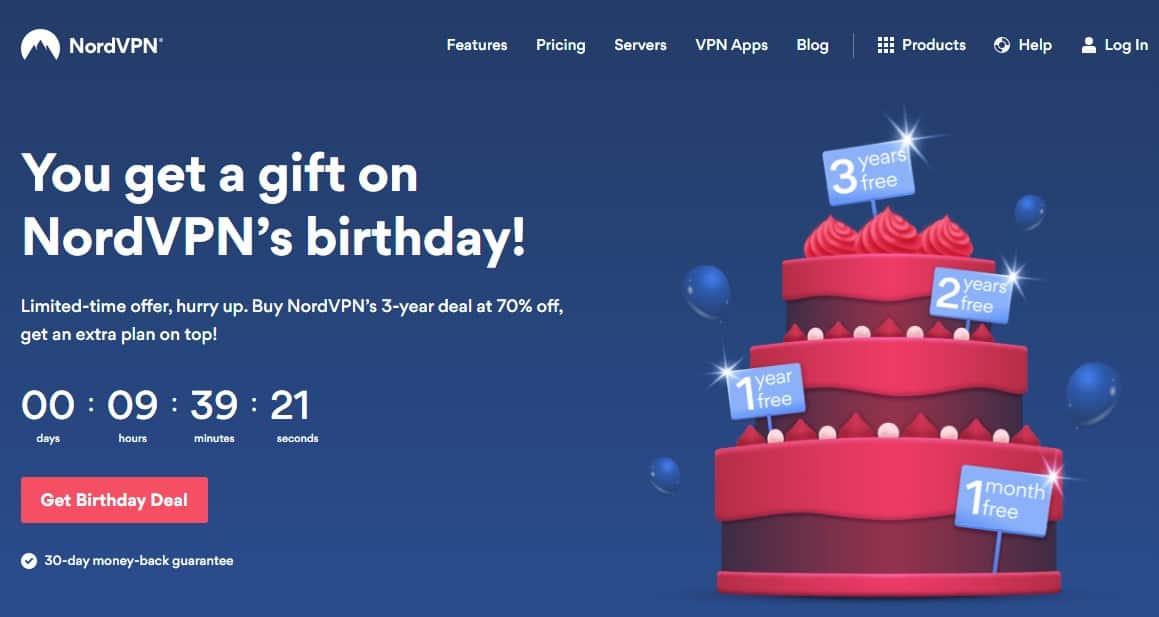 Let’s make one thing clear: ZenMate definitely punches above its weight. It’s rare for such an inexpensive service to offer a no-logging policy, let alone streaming-optimized servers or such powerful security features. Given that this VPN permits up to five connections and costs less than $2 per month, we think it’d make an excellent general-usage VPN.

That said, while both services offer similar security and privacy features, NordVPN ultimately comes out on top here. It costs just $1.84 more each month, has more than twice as many servers as ZenMate, and even works in China. Further, NordVPN boasts better unblocking capabilities, making it the better choice for anyone looking to stream while abroad.

Best Deal for NordVPN:Get a 70% discount on your three-year subscription.