A quick search for "VPN" in the Apple app store will reveal hundreds of apps claiming to be the best VPN for iPad. We tested dozens of popular iOS VPN apps and narrowed it down to just 6 we think are worth spending your money on.
Dave Albaugh 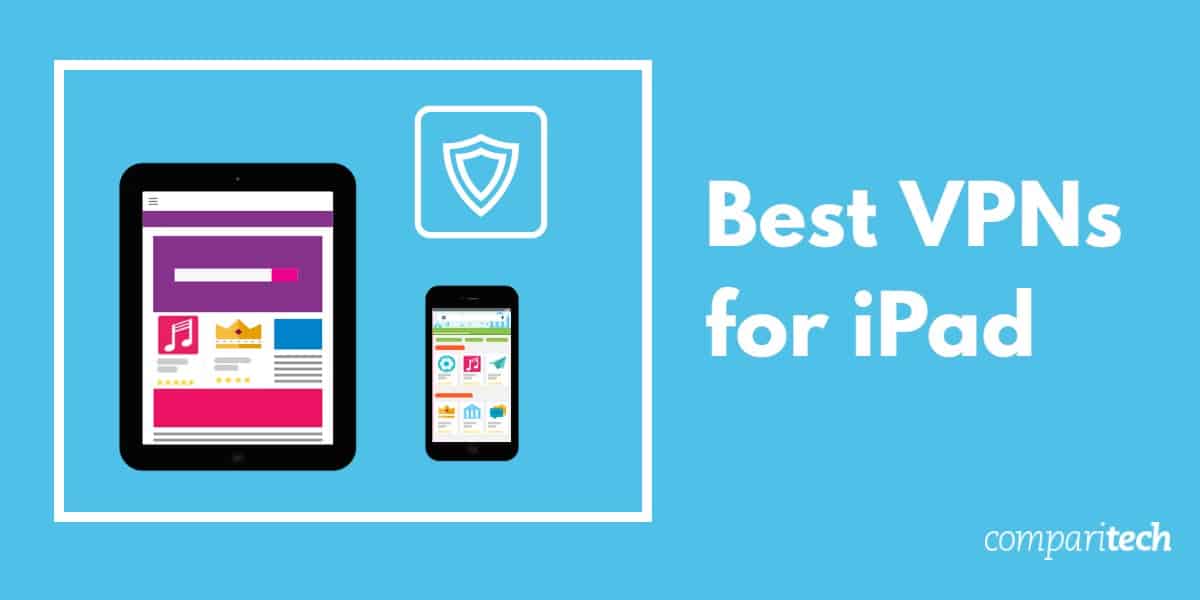 Are you trying to find the best iPad VPN? In this article, we’ll reveal our top 6 VPNs for iOS, how to get set up, and how to download a VPN if it doesn’t have an App in the App Store.

We get into plenty of detail about each of the VPNs on this list, but if you need to skip ahead in a hurry, here are our top pics:

We’ve curated our list of the best VPNs for iPad based on the following criteria:

The best VPNs for iPad

Here is our list of the best VPNs for iPad (or any iOS device):

NordVPN is our top choice for an iPad VPN. It performs better than rivals in our speed tests and offers great features for iPads and other iOS devices. The app is easy to install and use, and has an extensive, global network of VPN servers to choose from. As an added bonus, NordVPN allows P2P traffic through their VPNs without limiting bandwidth, so it’s popular for torrenting. The company accepts Bitcoin which is a bonus for privacy.

A single subscription allows you to connect up to six devices at the same time. If you want a value-for-money option with plenty of servers, good privacy protection features, and excellent unblocking potential (for Netflix and and other sites), then Nord is a stellar choice as an iOS VPN. NordVPN has recently been able to evade China’s Great Firewall and will work in other countries which actively block VPNs including the UAE.

BEST VPN FOR IPAD:NordVPN is our #1 recommendation. Extremely fast and a top performer in all categories. Good iOS device support. Has strong security features and allows up to 6 devices to be used simultaneously from one account. Includes 30-day money-back guarantee making it risk-free.

Surfshark is a low-cost VPN with over 1,700 servers in 60+ countries, and an easy-to-use iOS app that hides plenty of advanced features. This service easily unblocks major streaming platforms like Netflix US and BBC iPlayer, plus it’s fast enough to stream live HD video with no noticeable buffering. This VPN has no connection limit, so it’s ideal for families or people looking to secure lots of devices at once.

This service takes user security very seriously. Your traffic is secured using effectively uncrackable 256-bit encryption, as well as IPv6, DNS, and WebRTC leak protection. There’s also a kill switch (in every version) that immediately stops all traffic whenever you lose connection to the VPN unexpectedly. Surfshark doesn’t log any personally identifiable information although you can sign up almost completely anonymously by paying in Ripple, Ethereum, or Bitcoin. 24/7 support is on-hand over live chat.

Surfshark offers iOS, MacOS, Android, Windows, and Linux apps. It also works with supported routers although these must be configured manually.

BEST BUDGET VPN:Surfshark offers an unlimited number of connections, multi-platform support, and excellent unblocking ability, giving you the freedom to access whatever you want, wherever you are. It also comes with powerful security features and a 30-day money-back guarantee.

ExpressVPN’s app will run on iOS 7 and newer. It can be installed on iPhones, iPads and even the iPod Touch. The company operates VPN servers in 94 countries and does not limit your bandwidth or the number of times you can switch servers.

One of the best features is their logging policy stating that they don’t keep records of your traffic while connected to their servers. They also receive some bonus points for accepting many different payment methods: all the major credit cards, PayPal, Bitcoin, and others.

ExpressVPN is fast, great at protecting user privacy, and works to unblock geo-restricted apps like Netflix, Hulu, HBO, and BBC iPlayer. It will also work in countries like Turkey and China where many other VPN services have been blocked.

CyberGhost makes a slick, friendly VPN app that allows you to choose a server not just based on location, but based on how you plan to use the VPN. For example, the app will automatically select the best server for streaming Netflix or P2P filesharing, taking out the guesswork that comes with most other VPNs. It can also unblock BBC iPlayer and Amazon Prime, among other streaming channels. Perfect for streaming on the go with an iPad.

CyberGhost has ramped up expansion and now boasts over 5,500 servers in 90 countries. Every connection is protected by 256-bit AES encryption, DNS leak protection, and an optional kill switch that halts all internet traffic should the VPN connection drop. The provider keeps no logs of your activity while connected.

VALUE AND PERFORMANCE:CyberGhost is easy to use. A budget choice. Good on privacy. Streams HD video reliably. 45-day money-back guarantee.

IPVanish is a no-logs VPN service that utilizes military-grade encryption and a zero-logs policy to ensure both privacy and security. Features like unlimited P2P traffic, anonymous torrenting, a SOCKS5 web proxy, and unlimited server switching are just the beginning. IPVanish lets you connect up to five devices simultaneously with unlimited bandwidth. IPVanish owns and operates its own servers rather than renting them, as is the status quo, ensuring you can always find a fast, uncongested connection.

While not as adept at unblocking video streaming sites as others on this list, IPVanish is a favorite among Kodi users thanks to its easily navigable interface and ability to work with any Kodi addon. If you need an iPad VPN to use with Kodi, IPVanish is a top contender.

VyprVPN is one of the few providers to own and operate all of its own servers and data centers. That means you get blazing fast speeds across all 70+ server locations. All connections are 256-bit encrypted, and there’s no data cap or bandwidth limit. VyprVPN offers three tiers with two, three, and five simultaneous connections.

VyprVPN excels at bypassing censorship, whether you’re in China or just stuck behind a firewall at the office. You can also use it to unblock geo-locked sites and apps from abroad, including Netflix US. VyprVPN is the only provider on this list to prohibit torrenting on its network so torrent users should look elsewhere.

How to setup a VPN on iPad

If this is your first time using a VPN then you might find it helpful to see how to get started. Below is our simple step-by-step guide to iPad VPN setup.

Here’s how to setup a VPN on your iPad:

What to do when there is no iOS app

If you don’t want to use the provider’s app, or if your VPN service doesn’t come with an iOS app, there is a VPN tool built into iOS that can be manually configured to connect to your VPN provider’s server of choice. It’s a fairly straightforward setup, but you will need the following information before you begin:

To start, simply get into your Settings app and follow these instructions:

Note that manually setting up an iPhone VPN this way will encrypt your internet traffic and hide your IP address, but you won’t get many of the other useful features found in the apps like kill switches, leak protection, and automatic public wi-fi protection.

Apple junkie? No problem! All of the iOS VPNs we recommended above allow for several simultaneous connections so you can connect your iPhone, iPad, Macbook, and anything else in your house to the VPN at the same time. This is also useful if you share your VPN subscription with family or roommates.

Here are how many devices you can connect on each VPN with a base tier subscription:

If that’s not enough for you, you might consider configuring the VPN connection on your wifi router or setting up a VPN-enabled hotspot with a windows virtual router. A wifi router only counts as one device, and you can connect as many devices to it as you need and route them through the VPN. This also works for devices that don’t intuitively support VPNs, such as Apple TV.

If you’re not particularly tech-savvy, we recommend ExpressVPN’s pre-configured VPN routers. ExpressVPN makes the best VPN-enabled router firmware in the market. You will need an ExpressVPN subscription to use it, however.

Otherwise, you can configure a VPN on your own with a compatible router. Some routers come with firmware that supports VPN connections, and others don’t. If your router doesn’t support VPNs, look around to see if you can replace the firmware with an open-source alternative like DD-WRT or Tomato.

Note that you should use extreme caution when flashing new firmware to a router. Using firmware that’s incompatible with your exact router model or making a mistake during the flashing process could brick your router and leave it permanently damaged. The exact process varies from router to router.

It doesn't really matter what device you're using to access the internet. When online, if you want to...

… then you need a VPN on whatever device you use to get online. Fortunately, you have a variety of options and price ranges to choose from.

⭐Can I use a free VPN for iPad or iOS devices?

A bunch of supposedly free VPN apps for iOS are listed on the App Store that aren't actually VPNs. Hola is one such "service". Instead of connecting your computer to a VPN server, Hola connects your computer to a community-powered P2P network to provide supposedly anonymous internet access. The problem here is that the actual provider has no direct control over any of the nodes in the network as each node is a privately owned computer of one of it's 55 million members. The lack of strong encryption makes your traffic vulnerable to interception or inspection by any node and, worst of all, your internet bandwidth is sold to third parties who may or may not also have access to your computer's resources through Hola's software. This has all the makings of a botnet and should be avoided at all costs.

Tor does something similar, but uses very strong encryption and does not sell anyone's bandwidth. Tor's software also does not grant anyone else access to the resources of the device that it's running on or make your device available to anyone else for any kind of misuse or abuse.

Finally, most of the supposedly free VPNs include features that most users will want to avoid. Things like injecting advertisements into your web browser traffic, using weak or even no encryption, selling your personal information or detailed logs of your internet activities to third parties of their choosing, and even installing unwanted software on your devices, like adware, viruses, trojans, botnet clients, and other forms of malware.

⭐How do I use the Netflix iOS app with a VPN?

As you may know, Netflix has implemented an overseas VPN ban that prevents users abroad from accessing US, UK, and Canadian content through the Netflix iOS app. While there are a few VPNs that are not affected by this ban, only three on our list are compatible with the Netflix app on iOS devices: ExpressVPN, CyberGhost, and NordVPN.