Are you an AT&T customer? It’s possible that your bandwidth is being throttled and your personal data logged. We’ll show you the best VPNs for AT&T so you can enjoy fast speeds and improved online privacy.
Mark Gill TECH JOURNALIST, VPN AND PRIVACY SPECIALIST 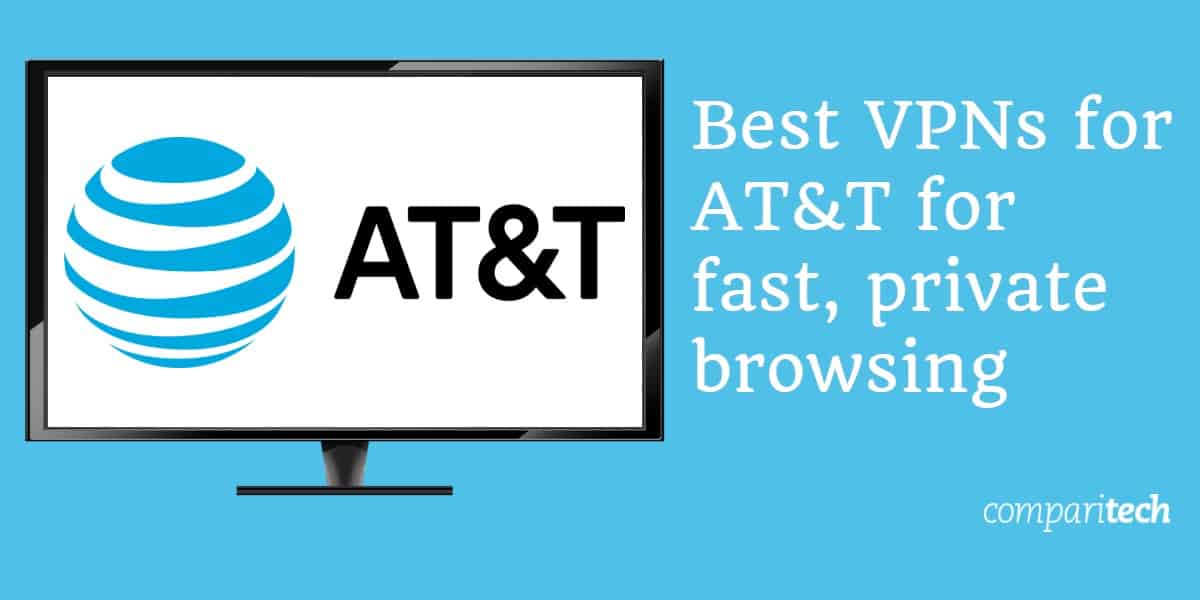 If you’re an AT&T customer, you may find you are suffering from bandwidth throttling. This means that your provider is limiting your internet speed, making streaming and torrenting particularly challenging. However, you can get around such restrictions by using one of the best VPNs for AT&T, allowing you unlimited bandwidth while keeping your data secure.

Not only will a VPN help you avoid bandwidth throttling it will keep your internet activity private from your internet provider and other snooping eyes.

When using a VPN, your device’s traffic is sent through an encrypted tunnel to a VPN server of your choosing. For example, if you choose a server in the US, you’ll obtain a US IP address. This lets you browse the web as if located in the US, allowing you to access region-locked content on platforms such as Netflix and Amazon Prime Video.

Before we explore all of the options in depth, here’s a quick summary of the best VPNs you can use with AT&T:

So how did we manage to come up with this list of the best VPNs for AT&T? We looked for VPNs that were able to provide all of the following:

The Best VPNs for AT&T

Here’s our list of the best VPNs we could find for AT&T that enable fast, private browsing:

NordVPN is our top choice for an AT&T VPN. It has a huge network of over 5,000 servers around the world, 1,600 of which are in the US. It outperforms all rivals in our speed tests so you can enjoy a seamless browsing experience. NordVPN unblocks many region-restricted services including Netflix and BBC iPlayer. There’s no bandwidth throttling which means you can stream content without buffering or lag. You’ll even find servers that are optimized for P2P file-sharing as well as those that offer extra security (double VPN servers, for instance).

This is a great value VPN as evidenced by the fact that NordVPN lets you have up to 6 simultaneous connections. It also offers 24/7 live chat support and user-friendly apps and browser extensions. This Panama-based VPN provider safeguards your online security with 256-bit AES encryption and DNS and IPv6 leak protection. It offers a kill switch as well as a strict no-logs policy, ensuring your personal information stays private.

BEST VPN FOR AT&T:NordVPN is our top pick. It operates over 5,000 servers and works with Netflix and Amazon Prime Video. Optimized servers for improved privacy. Up to six simultaneous connections. Offers 24/7 live-chat support and a strict no-logs policy. Includes a 30-day money-back guarantee for a risk-free deal.

Surfshark is a low-cost VPN that has quickly grown to become one of the better options for AT&T. In particular, it lets you connect an unlimited number of devices simultaneously which means you can share with family. This VPN’s servers are located in dozens of countries worldwide, including the US and Canada. Speeds are good for anything from browsing to streaming. You’ll be able to use Surfshark to unblock most geo-restricted websites and services including Netflix and BBC iPlayer.

One of the best things about Surfshark is its beginner-friendly apps and very convenient browser extensions. This combined with the 24/7 live-chat customer support makes it an excellent choice if it’s the first time you’re using a VPN. Security is offered in the form of 256-bit AES encryption, DNS and IPv6 leak protection, and a kill switch. Surfshark is based in the British Virgin Islands and has a strict no-logs policy, stating that even it doesn’t know what you’re doing online.

ExpressVPN is another solid option for AT&T. It offers unlimited bandwidth and an unbeatable combination of speed and security. This VPN has a network of more than 3,000 servers in 94 countries, allowing you to unblock region-locked content almost anywhere. ExpressVPN unblocks many websites and services including Netflix, Skype, and BBC iPlayer.

You can use ExpressVPN on a wide range of devices thanks to the various apps and browser extensions available. Connecting to a server only takes a few seconds which makes this VPN very easy to use. That said, ExpressVPN’s 24/7 customer support is available via live chat and email. This VPN can be used on up to 5 devices simultaneously, allowing you to secure everything from your laptop to your phone.

ExpressVPN uses 256-bit AES encryption, DNS and IPv6 leak protection as well as a kill switch to keep you safe. This service is headquartered in the British Virgin Islands and you can even sign up semi-anonymously with a throwaway email address.

ExpressVPN apps can be downloaded for Windows, Mac, Android, iOS, Linux, and routers. You can also find browser extensions for Chrome and Firefox.

CyberGhost offers fast servers and unlimited bandwidth. This is one of the fastest growing VPNs on the market with a network of over 4,500 servers at the time of writing. In particular, it has a significant presence in the US and UK, where it has approximately 1,000 and 500 servers respectively. This VPN unblocks Netflix US as well as BBC iPlayer. You can even connect up to 7 devices simultaneously.

This service comes with 24/7 live chat support and excellent apps for various platforms. You are protected from AT&T’s logging of personal information thanks to CyberGhost’s use of 256-bit AES encryption. This is a no-logs VPN that allows you to stay anonymous online. Further security features include protection from DNS and IPv6 leaks, an automatic kill switch, and even an ad blocker.

IPVanish is headquartered in the US. Indeed, nearly 700 of its 1,300 servers are in North America. As such, this VPN service is well placed for unblocking Netflix US. IPVanish states that it doesn’t limit the amount of data you can transfer, or throttle your network connection. Better still, it lets you connect up to 10 devices simultaneously, allowing you to share this VPN with family.

Connecting to an IPVanish server is quick and easy, plus there’s an option to connect to the best available server automatically. This VPN offers live chat support just in case you have any trouble. You can browse the web with peace of mind as IPVanish doesn’t keep any traffic logs. What’s more, it offers 256-bit AES encryption, a kill switch, and DNS and IPv6 leak protection. Furthermore, IPVanish owns its servers, rather than renting them from third parties, meaning your privacy is guaranteed.

USE ON 10 DEVICES:IPVanish lets you have up to 10 simultaneous connections. Works with Netflix US and offers live chat support. Good speeds for streaming with unlimited bandwidth. Strong security offering with encryption and a no-logs policy. 7-day money-back guarantee.

PrivateVPN is a good option for using with AT&T thanks to its unlimited bandwidth and speed. This VPN is ideal for streaming and torrenting and is able to unblock all sorts of websites and services including Netflix. While it has a smaller server network, it does offer very fast servers in 60 countries including the US. The service offers live chat support through which you can speak to PrivateVPN’s developers directly and obtain remote assistance.

You can use this VPN to protect up to 6 devices simultaneously. If you don’t have experience with VPNs, you’ll likely appreciate the simplicity of PrivateVPN’s apps, especially since they make finding and connecting to a server so quick and easy. PrivateVPN is based in Sweden and doesn’t keep any traffic logs. It further protects your privacy with a combination of 256-bit AES encryption, DNS and IPv6 leak protection, and a kill switch.

You can use PrivateVPN through the apps for desktop (Windows and Mac) and mobile (Android and iOS). Linux and routers require you to follow manual setup instructions.

SUPER FAST SPEEDS:PrivateVPN has fast servers for streaming and torrenting. Unblocks Netflix, Hulu, BBC iPlayer, and more. Very easy to use desktop and mobile apps. Offers live chat support. No-logs VPN with a high level of encryption. Use on up to 6 devices. 30-day money-back guarantee.

How to use a VPN with AT&T

It’s quick and easy to set up a VPN with AT&T. Here’s what you need to do:

Using a VPN with AT&T

Can I use a free VPN with AT&T?

While there’s little stopping you from using a free VPN with AT&T, we don’t recommend it. Free VPNs are simply a waste of time due to their poor performance and security. A VPN for AT&T should offer unlimited bandwidth so you can browse, stream, and torrent without restriction. However, free VPNs often throttle bandwidth because they don’t have enough servers to cope with demand.

You’ll also find that free VPNs are poor when it comes to unblocking geo-restricted platforms such as Netflix, Amazon Prime Video, and Skype. However, the most serious issue with free VPNs is the fundamental lack of security offered. Many free VPNs don’t encrypt your data while others log your data and sell the information to third parties. This means that there’s little advantage to using a free VPN with AT&T.

The US has seen a decline in net neutrality in recent years. Internet Providers such as AT&T can block content when it suits them. What’s more, AT&T is known to throttle the bandwidth of its users. This means you may experience slow speeds when trying to access certain services, be it Netflix or Skype. The best VPNs for AT&T offer unlimited bandwidth with absolutely no bandwidth throttling.

Another reason to get a VPN for AT&T is to have greater online privacy and anonymity. This is particularly important if you’re in the US which is a member of the Five Eyes intelligence alliance. Without a VPN, your data may be logged and shared with your government as well as international governments. A quality VPN encrypts your data and offers a strict no-logs policy which means that there’s no personally identifying data to be shared even if it’s requested.