How to watch the Oscars 2020 online free from anywhere 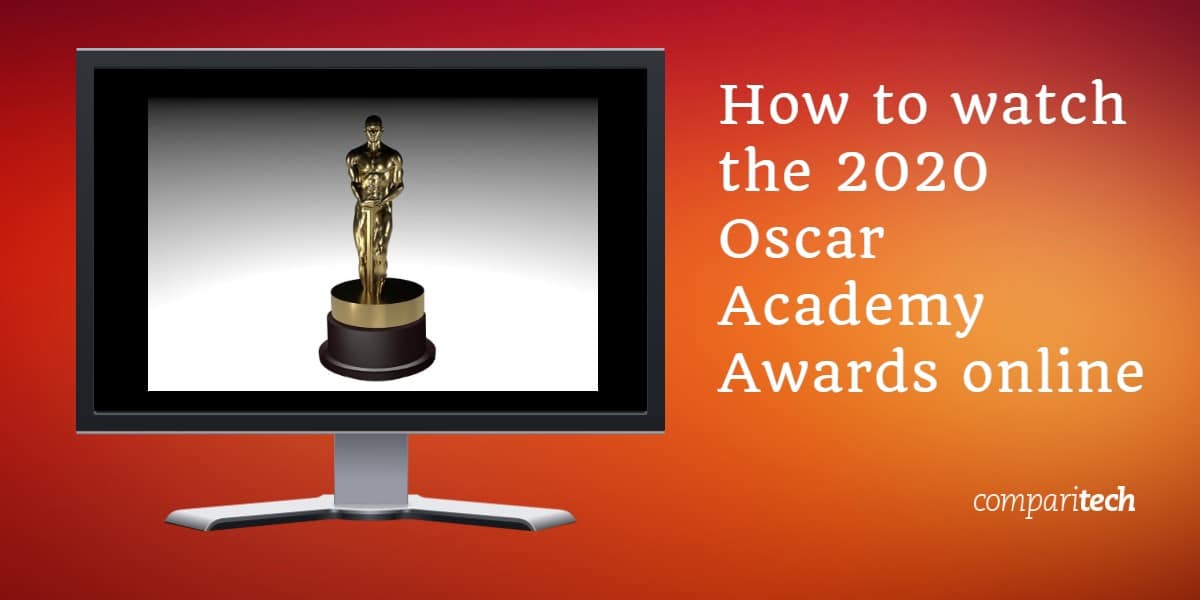 The Academy Awards (aka the Oscars) is the hottest movie awards show of the season, with Hollywood’s biggest stars gathering to see who will be the winners (and losers) of the prestigious Oscar statues. The 92nd Annual Academy Awards show will take place at LA’s Dolby Theatre on Sunday February 9 at 8pm EST (5pm PST / 1am GMT), although the hotly-anticipated red carpet action will start much earlier. With very few members of the general public getting anywhere close to the event, most of us will have to settle for watching at home.

In this post, we’ll be explaining where you can watch the Oscars 2020 online depending on your location. We’ll also explain how to use a Virtual Private Network (VPN) to access your usual broadcasts while traveling abroad. Note that we’ll only be discussing official broadcasts. While there will no doubt be some unofficial streams, these tend to be of poor quality and might even be taken down part way through the show.

Most sites showing the Oscars region-lock their content. As such, if you’re traveling abroad when the show airs, you’ll need a VPN to access your usual services.

How to watch the Oscars 2020 free online with a VPN

Streaming services region-lock their online streams such that they can only be accessed by users located in the right country. A VPN can help by spoofing your location. It will mask your real IP address and replace it with one from a location of your choice.

Here’s how to watch the Oscars 2020 live stream online from anywhere:

While these steps will hopefully work right away, it’s worth testing out a live stream on your source site before the awards show starts. This way, you’ll have time to troubleshoot any issues and won’t have to worry about missing any of the best bits.

How to live stream the Oscars 2020 free on Australian TV

While viewers in other countries might have to log in to cable provider accounts or over-the-top services to watch the Oscars online, things are simpler for viewers in Australia. For the past few years, Channel 9 has had rights to the show, but this year, coverage is moving to Channel Seven (The Seven Network). Note that due to the time difference, the main show will start at midday on Monday, February 10 in Australia. However, there will be a primetime repeat at 7:30 pm later that day.

Channel Seven will broadcast the awards show online via 7plus. This channel is free to watch, but it’s region-locked and only accessible to users with an Australian IP address.

If you’re traveling outside Australia, the workaround is simple. Just connect to an Australian VPN server as outlined in the steps above and you’ll have unrestricted access. Don’t have a VPN? ExpressVPN is our top choice for streaming. Setup is quick and simple, and this provider is known for being fast, reliable, and great at unblocking. A 30-day money-back guarantee makes it risk-free.

Where else to watch the 2020 Oscars

In the US, ABC is showing the 2019 Oscars. This channel is easily accessible for anyone who has it as part of their cable plan. To watch ABC online or on the ABC Go mobile app, just sign in with your US cable provider credentials.

If you don’t have a cable plan but have a subscription to an over-the-top service, you may be in luck. YouTube TV, AT&T TV Now, and Hulu with Live TV all provide access to ABC. What’s more, each of these over-the-top services comes with a free trial period, so you could sign up, watch the Oscars, and cancel before the trial ends. This means you get to watch the awards show for free. These services do require signup with a US billing address so this won’t work for those who usually live outside the US.

If you normally have access to ABC but you’re traveling abroad, you can connect to a US VPN server and log in as normal.

In the UK, Sky will be broadcasting the Oscars, with red carpet coverage starting on Sky1 at 10pm and the actual awards show being broadcast on Sky Cinema (renamed Sky Cinema Oscars) at 1am on February 24th. For those who can’t stay up that late, a highlights show will air on Monday evening.

To access the Sky online streams, you’ll need to sign in with your Sky credentials. If you’re not an existing Sky customer, you can purchase a Sky Cinema Pass from NowTV, which costs £11.99 per month. New customers get a free 7-day trial, so you could watch the Oscars for free! Note that you need a UK billing address to subscribe to NowTV.

These services are region-locked. To access your account if you’re traveling outside the UK, just connect to a UK VPN server.

For Canadian viewers, the simplest way to watch the Oscars ceremony is on CTV. This channel lets you stream its content live online, but you need to sign in with credentials from a Canadian cable provider. CTV provides mobile apps, so you can view the Academy Awards while on the go.

If you have a Canadian cable subscription but are traveling outside the country, you can use a VPN to connect to a Canadian server and log in to CTV as normal.

Who’s nominated in the 2020 Academy Awards?

The Oscar nominees were announced on January 13. There weren’t too many surprises, although the Academy has been accused of lack of diversity in its nominees. The movie with the most nominations going into this year’s awards is Joker, starring Joaquin Phoenix.

Once again, the show will be hostless. The official Oscars Twitter account sent out a Tweet on January 8 appears to confirm this. Last year, the awards show was hostless after Kevin Hart stepped down months before the event. Given that there is no host this year, presumably the new format worked and was a hit with viewers.

Here are the nominees for some of the most popular categories:

Image credit: “Oscars” by Kai Kalhh licensed under CC BY 2.0