Want to watch France.tv outside France? The problem is that this free streaming service is geo-restricted. However, with the help of one of the best VPNs, you can easily watch France.tv abroad.
Mark Gill TECH JOURNALIST, VPN AND PRIVACY SPECIALIST 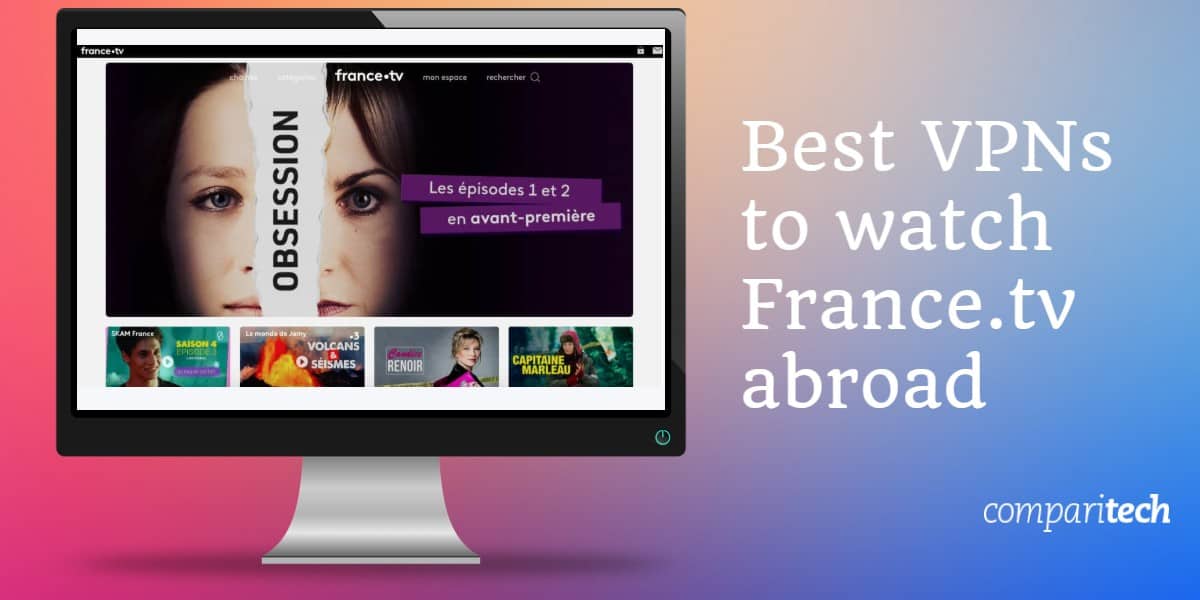 If you try to watch France.tv abroad without a VPN, you’ll come across a message: 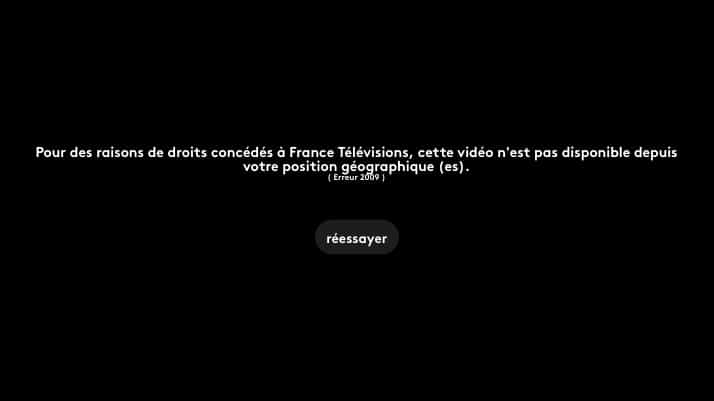 Unfortunately, this means that the content you’re trying to watch is region-locked and unavailable outside of France. The good news is that you can watch France.tv abroad by using a VPN (Virtual Private Network). VPNs encrypt your device’s internet traffic and route it through a server in another country, making it look as if you’re browsing from France, regardless of where you actually are in the world.

There are many VPN services with servers in France. We’ve taken the time to find the best VPNs to watch France.tv abroad by only selecting VPNs that can offer the following:

Here’s our list of the best VPNs to watch France.tv outside France:

ExpressVPN is one of the best VPNs for unblocking geo-restricted content, France.tv included. That’s because it has over 3,000 servers in an impressive 94 countries. In addition, this VPN service unblocks Netflix, BBC iPlayer, and Amazon Prime Video. Another reason why ExpressVPN is the best VPN to watch France.tv abroad is that it offers fast enough speeds for HD streaming. Indeed, during our tests, we experienced no performance issues of any kind.

It’s worth knowing that ExpressVPN offers 24/7 customer support which is available via live chat and email. However, you’re unlikely to need it often as this VPN is very easy to use. There’s a variety of intuitive apps on offer and connecting to a server only takes a few seconds. If you have any doubts, you can always try ExpressVPN risk-free because it comes with a 30-day money-back guarantee.

ExpressVPN takes your security seriously and uses 256-bit AES encryption, DNS and IPv6 leak protection and a kill switch to secure your data. This VPN doesn’t keep any identifying logs of its users’ activities. It’s also nice to see that this British Virgin Islands-based VPN lets you pay in Bitcoin, meaning you can sign up anonymously with a throwaway email address.

You can use ExpressVPN apps for the following: Windows, Mac, Android, iOS, Linux, and routers. There’s also the option of Chrome and Firefox browser extensions.

BEST VPN FOR FRANCE.TV:ExpressVPN is our top choice. Its fast and reliable servers are perfect for watching France.tv abroad. Unblocks Netflix and Amazon Prime Video. User-friendly apps, strong encryption, and offers 24/7 support. A 30-day money-back guarantee means you can try it risk-free.

NordVPN has almost 200 servers in France, making it easy to unblock France.tv wherever you are. With over 5,000 servers across 60 countries, you can use this service to stream not just France.tv but also other popular sites like Netflix, BBC iPlayer, and Hulu. The streaming experience is smooth without any buffering or lag. NordVPN also offers specialty servers such as Double VPN for those seeking greater security while browsing.

The apps offered by this Panama-based VPN provider are ideal for beginners as they’re easy to use and navigate. What’s more, you can enjoy up to 6 simultaneous connections via a single account. NordVPN offers excellent live chat support which is available 24/7. In terms of security, it has a strict no-logs policy to protect your privacy. There’s also 256-bit AES encryption, DNS, IPv6, and WebRTC leak protection, and a customizable kill switch.

VALUE FOR MONEY:NordVPN has nearly 200 servers in France, offering great value. It can unblock France.tv as well as Netflix. The apps are easy to use and there’s 24/7 live chat support. Security includes encryption and a no-logs policy. 30-day money-back guarantee.

CyberGhost has more servers in France than most VPNs. At the time of writing, it has 321 servers in France and almost 3,700 worldwide. This VPN offers fast speeds and strong unblocking ability, allowing you to stream high definition content without interruption. Aside from being able to unblock France.tv, it can also unblock region-locked platforms such as Netflix US and BBC iPlayer. You can use CyberGhost on up to 7 devices simultaneously which is more connections than most VPNs allow.

While there’s live chat support should you need it, this VPN’s apps are simple enough to use, making connecting to a server in France or any other country quick and easy. CyberGhost is known for its excellent security; it comes with 256-bit AES encryption, protection from IPv6 and DNS leaks, and an automatic kill switch enabled by default. A strict no-logs policy is included too, meaning that even CyberGhost can’t see what you do online.

STRONG SECURITY:CyberGhost has over 300 servers in France for watching France.tv. It’s fast, reliable, and highly secure with encryption and kill switch. Use on up to 7 devices simultaneously. Unblock Netflix US and BBC iPlayer. 45-day money-back guarantee.

IPVanish allows up to 10 simultaneous connections, allowing the whole family to secure their devices and watch France.tv abroad. This US-headquartered VPN provider offers approximately 1,300 servers worldwide, 26 of which are in Paris, France. The speeds offered by these servers are consistent and allow for high quality streaming. IPVanish is also able to unblock the US version of Netflix which is a service that many VPNs struggle to unblock.

You should have no trouble in using the IPVanish apps as the interface is very straightforward. It’s easy to search for and connect to a server although live chat support is available if you do have any issues. All of the essential security features are included in this VPN service: 256-bit AES encryption, DNS leak protection, and a kill switch. There’s even OpenVPN obfuscation in case your network blocks VPN connections. What’s more, IPVanish states it doesn’t keep any connection or activity logs.

You can use IPVanish via the apps for Windows, Mac, Android, iOS, and Amazon Fire TV and Fire Stick. Manual configuration is required for Linux and routers.

IDEAL FOR FAMILIES:IPVanish allows up to 10 simultaneous connections which is perfect for families with many devices. 26 servers in France for France.tv. Apps are easy to use and security includes encryption and no-logs policy. 7-day money-back guarantee.

PrivateVPN may be a smaller VPN service with around 100 servers worldwide but it’s fast and excellent at unblocking region restricted content. It can unblock France.tv as well as the likes of Netflix, Amazon Prime Video, and BBC iPlayer. This is a reliable, high-speed VPN which lets you secure up to 6 devices at once, so it offers very good value for money.

If you’re looking for a user-friendly VPN, this may be the service for you. The simple design of the apps makes connecting to a server or adjusting your preferences quick and convenient. PrivateVPN is also a highly secure service. It protects your data with 256-bit AES encryption, a no-logs policy, DNS and IPv6 leak protection, and a kill switch, so you can rest assured that your activities aren’t being monitored.

HIGH SPEED SERVERS:PrivateVPN is a fast VPN service for streaming France.tv, Netflix and more. Use on up to 6 devices. Secures your data with encryption and DNS leak protection. Desktop and mobile apps are very user-friendly. 30-day money-back guarantee.

How to watch France.tv abroad with a VPN

Setting up a VPN to watch France.tv outside France is quicker and easier than you might think. In fact, it need only take a few minutes! Here’s what you need to do:

How to watch France.TV with a VPN

In the unlikely event that France.tv is still blocked, it’s worth trying another server or two. If you’re still encountering an issue, contact your VPN’s customer support for advice.

Can I use a free VPN to watch France.tv abroad?

Although some free VPNs are able to unblock France.tv, we can’t recommend them for a few reasons. The first is that free VPNs are generally poor at unblocking streaming services. This is particularly the case when it comes to the likes of Netflix, Amazon Prime Video and HBO Go which have taken to blocking VPN servers in recent years. The best VPNs for France.tv have lots more servers and are able to get around such restrictions.

You may notice that streaming France.tv with a free VPN involves a lot of lag and buffering. That’s because free VPNs are known to restrict your bandwidth. They do this because they have too many users and too few servers to meet the demand. As a result, browsing is often frustratingly slow and streaming can be nearly impossible. In contrast, the best VPNs are perfect for streaming as they offer plenty enough servers to provide everyone with a high-speed connection.

Aside from being unable to unblock many streaming services and offering slow speeds, free VPNs can also be unsafe. The reason for this is that many lack security features that are deemed essential to privacy. This includes high level encryption and a kill switch. Others may even log your activity and sell it to the highest bidder. You can avoid this by choosing a quality paid VPN that has a strict no-logs policy.

What can I watch on France.tv?

You can watch live French TV as well as video-on-demand (VOD) content on France.tv. The live TV channels include France 2, France 3 and France Info. While much of the VOD content is French, there’s also content from other countries including the UK. Here are some of the TV shows you can watch on France.tv: