How to watch The Outpost season 2 online from anywhere

Would you like to swatch The Outpost season 2 online for free? Although The CW isn’t available outside of America, you can still live stream The Outpost from anywhere using a Virtual Private Network (VPN), and below, we’ll explain how.
Ian Garland Streaming, Kodi and VPN Expert 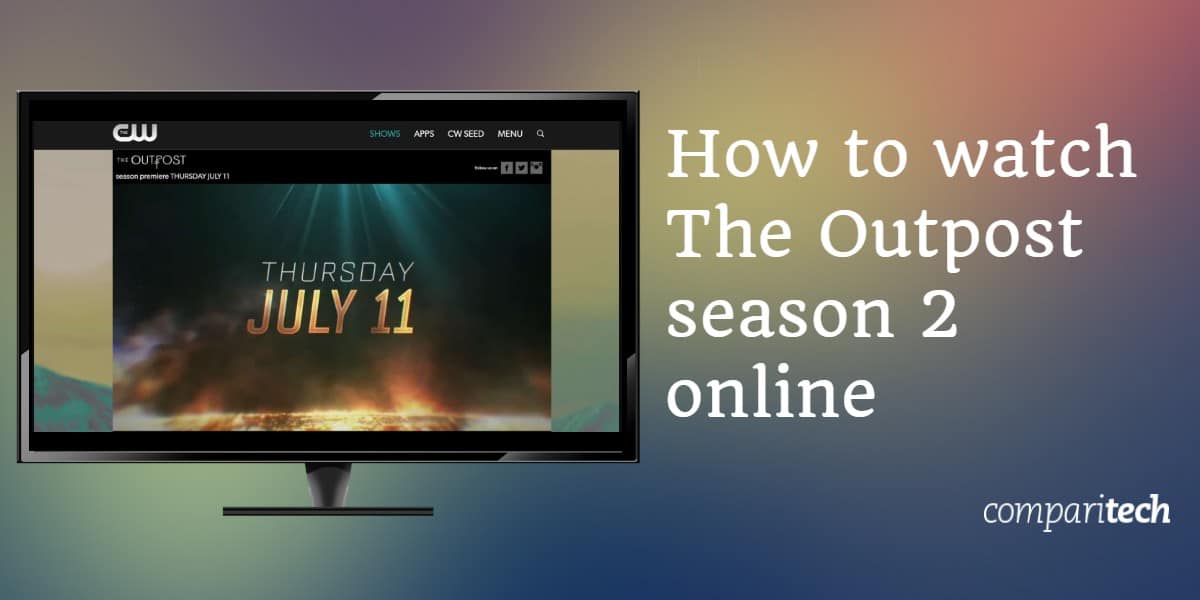 The second season of The Outpost will premiere on The CW at 9 PM EST (6 PM PST), July 11. There’ll be a new episode every Thursday night, and if there are ten episodes (as with season one), we can expect this series to end on September 12. There’s still plenty of time before then, though, so read on to find out how to watch The Outpost in your country.

It’s important to note that we’ll only be recommending official sources. The Outpost is a fan-favorite show, meaning there will almost certainly be unlicensed live streams available. However, these are often laggy and only available at very low resolutions. Additionally, unauthorized streams can be taken offline for copyright violation at any time, meaning you may not even get to see the end of an episode. With several legitimate ways to watch The Outpost online for free, there’s no reason to resort to shady, unlicensed streams.

This show will only be available on region-locked streaming services. As such, you’ll need a VPN to watch The Outpost season 2 abroad.

How to stream The Outpost abroad with a VPN

New to VPNs and not sure how to get started? Don’t worry: they’re actually quite simple to use once you know how. Follow the steps below to unblock and stream The Outpost from anywhere:

If you’re using one of the platforms that allows you to stream The Outpost live, it’s important to make sure your VPN works before the show begins. This way, you’ll have time to get help from your VPN’s customer support team if anything goes wrong, and you’re far less likely to miss the start of the season due to unforeseen technical difficulties.

The only network showing The Outpost season 2 in the US is The CW. If you’re not bothered about watching this show live, you can stream the entire second season for free as The CW adds new episodes to its on-demand library shortly after they air. Users don’t even have to create an account in order to watch, although only five episodes are available at any one time, meaning you have four weeks to catch up if you miss an episode.

Want to watch The Outpost live online? Currently, Hulu with Live TV, fuboTV, and YouTube TV all let you stream The CW live, although at around $50 USD per month, these services are a pretty expensive way to watch a ten-episode series. They each come with a week-long trial, though, allowing you to watch a handful of episodes live and free of charge.

Until recently, The CW allowed users to watch the first season for free. However, older episodes have been removed in the lead-up to the season two premiere. As such, the only way to stream season one of The Outpost online is to buy it on Amazon Prime Video for $19.99.

All of the streaming services above are geo-restricted and only available in the US. You can still access them from abroad using a VPN, though. Don’t have a VPN yet? ExpressVPN comes with a 30-day money-back guarantee, allowing you to live stream The Outpost risk-free. If you’re unsatisfied or only need a VPN to watch this show, you can just cancel within 30 days for a full refund.

Where else can I watch The Outpost online?

Although The Outpost season two won’t enjoy as wide a release as some of The CW’s other shows, it will air in a couple of other countries. Take a look below to see if there’s an official source where you are:

Season two will begin at 9 PM on July 15, exclusively on Syfy. The Syfy website doesn’t actually have a live stream but despite this, it’s still possible to watch this channel online. Sky TV and Virgin TV customers can simply log in to the Sky Go or Virgin TV Go apps, respectively, and watch the new season at no added cost.

Don’t have cable TV? No problem: just sign up for Now TV’s Entertainment pass instead. This costs £7.99 per month and comes with a free seven-day trial. This will allow you to stream The Outpost live, and better still, the entire first season is available on-demand in case you have some catching up to do.

Sky Go, Virgin TV Go, and Now TV are all geo-restricted. This means you’ll need a VPN to access them outside of the UK.

Australian fans can watch The Outpost season two on Syfy, starting July 17 at 7:30 PM AEST. Don’t worry about missing an episode, as there’ll be a rerun every Sunday at the same time. If you’re an existing Foxtel TV subscriber, you can sign in to Foxtel Go and watch Syfy live, for free.

Luckily, there is another way to watch for those without cable. The Outpost will be available on-demand as part of Foxtel Now’s base package. This usually costs $25 AUD per month, but the service comes with a ten-day trial, during which you can watch any channel you like. Another benefit of Foxtel Now is that new episodes are added to the on-demand catalog shortly after airing, so there’s no need to worry if you miss an episode.

Unfortunately, no major streaming service in Australia offers the first season. As such, the only way to watch The Outpost season one online is to buy it from iTunes or similar stores for around $30.

Foxtel Now and Foxtel Go are region-locked, and as such, you’ll need a VPN to use them abroad.

What can we expect from season 2 of The Outpost?

The Outpost’s cast and crew have been remarkably tight-lipped about the plot of season 2. However, judging by the poster for the upcoming series, and the brief episode summaries on IMDb, it seems like the second season will focus more on Talon’s personal growth, both as a sorceress and a leader.

The Outpost didn’t see quite as positive a reception as other CW shows like The Flash, and so until recently, it was unclear whether it’d even be renewed at all. All the same, unless viewer numbers increase significantly, a third series does not seem likely, so at least we can expect this season to tie up any loose ends.

As far as we’re aware, there have been no major changes to the cast (barring characters who were killed off in season one). As such, fans can expect to see all of their favorite characters reprise their roles, including Jessica Green as Talon, Jake Stormoen as Garret, and Anand Desai-Barochia as Janzo.