Kodi addon Animetoon not working? Is there a fix or an alternative addon? 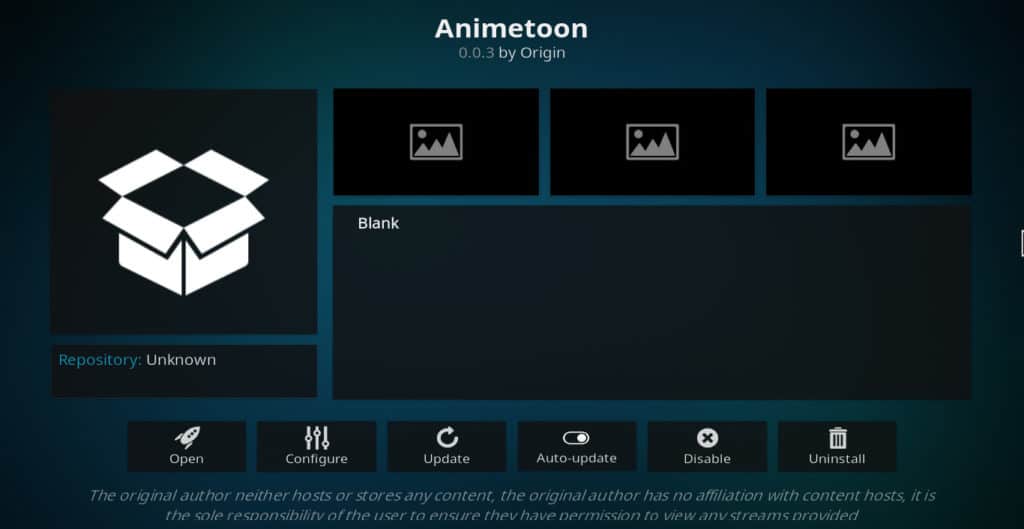 Is your Animetoon Kodi addon not working? The Animetoon addon is popular, but you’re likely to run into some problems when trying to run this addon. Below, we explore why this addon may no longer be working, and some possible workarounds and alternatives that should help you on get the anime and cartoon streaming you’re looking for.

Kodi is an open-source software media player from the Kodi foundation. It runs apps called “addons” that allow users to watch streaming-videos from virtually anywhere on the Web. It can be installed on an Amazon Fire TV or Nvidia Shield, or casted to a Roku using an Android or iOS phone.

Kodi is sometimes blamed for online piracy. However, there are many legal Kodi addons that stream licensed content.

You should always use a VPN with Kodi

Using Kodi carries some privacy and security risks, just like using any other video-streaming software does. For this reason, Kodi users should always use a VPN when streaming.

VPNs can help protect against a man-in-the-middle attack, which occurs when a hacker intercepts your data and pretends to be the site you are interacting with. It can help prevent this problem because it encrypts your device’s incoming and outgoing data, making the information unreadable to anyone but the intended target. In addition, VPNs can hide your location from streaming sites, preventing them from blocking content based on where you live.

Not all VPNs are effective though. Some invade the privacy of users by keeping logs of their behaviour, don’t have servers in enough countries to get around geoblocks, or don’t have apps for popular TV devices like the Amazon Fire Stick.

For these reasons, we recommend Kodi users take advantage of IPVanish. Unlike many other VPNs, IPVanish has servers in over 60 countries, keeps no logs, and has an app for both Amazon Fire and Nvidia Shield. It’s a great tool to protect the privacy of Kodi users.

READER DEAL: Save up to 60% IPVanish plans here.

What is Animetoon Kodi addon?

Animetoon is an addon developed by a person who calls himself “Origin.” The current version is housed in the Origin repo. However, the current version does not work, and it is unknown where a version can be found that does work as intended. Originally, Animetoon provided links to sites that offered pirated streams of popular anime titles. There was a lot of free content available using Animetoon, and this is why so many Kodi users liked it.

Installing Animetoon from the Origin repo now produces a message where the main menu should be. This message says:

“Addon has been wiped, please uninstall. Due to the potentially copyright infringing nature of some media openly sourced on the internet it is not worth continuing development and potentially jeopardizing life for a hobby. I respect the decisions of those that chose to continue so hopefully you can all respect mine too.” 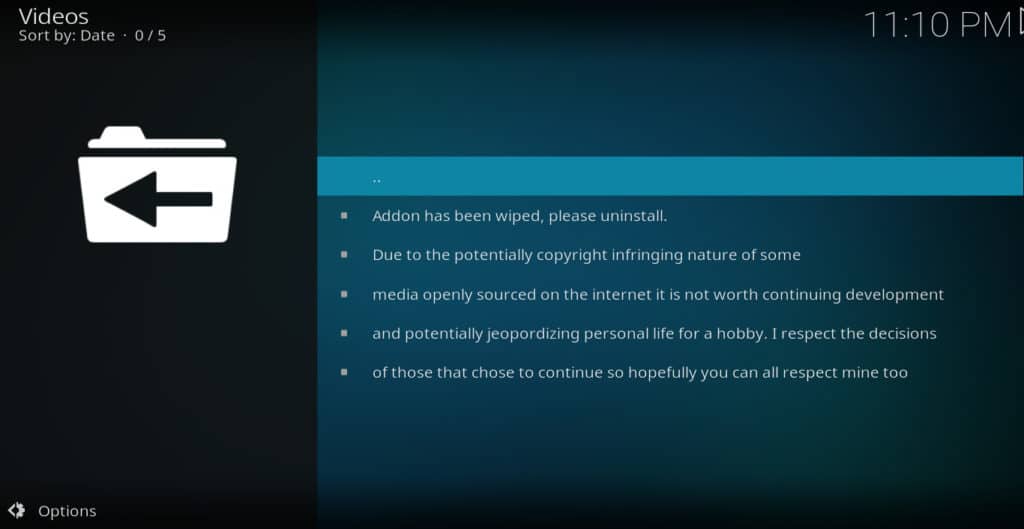 Apparently, the developer now fears legal action will be taken against him for providing links to pirated material. The Animetoon addon is no longer being updated, and no official working copies are available anymore.

There may be some old copies of Animetoon floating around on the Internet that still work as intended. However, any copy that is found should be considered a high risk to the security and privacy of users that install it. Since these copies are not from the official Origin repo, there is no way of knowing if they have been tampered with and are being used to install malware on Kodi users’ computers.

Even if a copy could be found that was proven not to contain malware, it is unlikely that many of the links would work. These kinds of addons have to be updated regularly because pirate websites are always being taken offline, leading to dead links. Since Animetoon has not been updated recently, even copies that work probably don’t offer much content.

In addition, Animetoon is known to stream almost exclusively from sites that are unlicensed. So if you like anime, using Animetoon doesn’t encourage the creators of these great works of art to keep producing more. 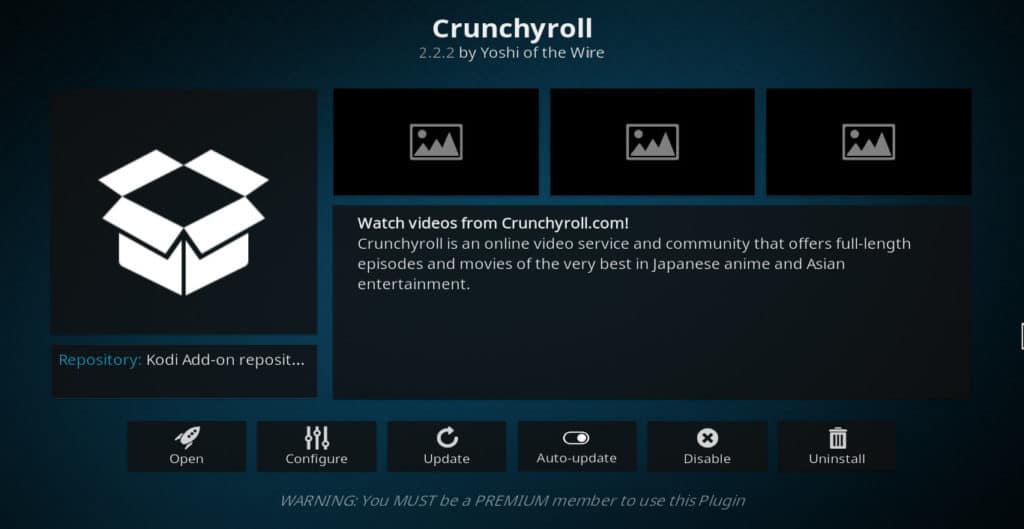 If you like subtitled anime series, Crunchyroll is the best place to find them. Its catalog includes such titles as Dragon Ball Super, The Ancient Magus Bride, One Piece, Black Clover, and many others.

Crunchyroll recently partnered with Funimation, a production company known for producing great English-dubbed anime DVDs. Because of this, many of the same titles available on Funimation Now (listed below) are also on Crunchyroll. Crunchyroll has the subtitled versions while Funimation has the dubbed ones. This partnership has greatly expanded the number of titles on Crunchyroll.

In addition to a large catalog of past anime series, Crunchyroll also often makes new episodes available on the same day they air in Japan.

Crunchyroll costs $6.99/month for the premium, ad-free version of the service. It offers a free trial for the first 7 days. It also offers an ad-supported basic service that allows you to watch free anime with commercials. However, the only way to sign up for the basic service without trying out premium is to register and then click away when it asks for credit card info. If you do sign up for the basic service, you’ll be unable to use the Kodi addon with it.

Aside from not having a free service that works with Kodi, the other major disadvantage to Crunchyroll is that most of its library is subtitled. The service has around 80 dubbed series, but this is a small number in comparison to their total content library.

Learn how to install the Crunchyroll Kodi addon. 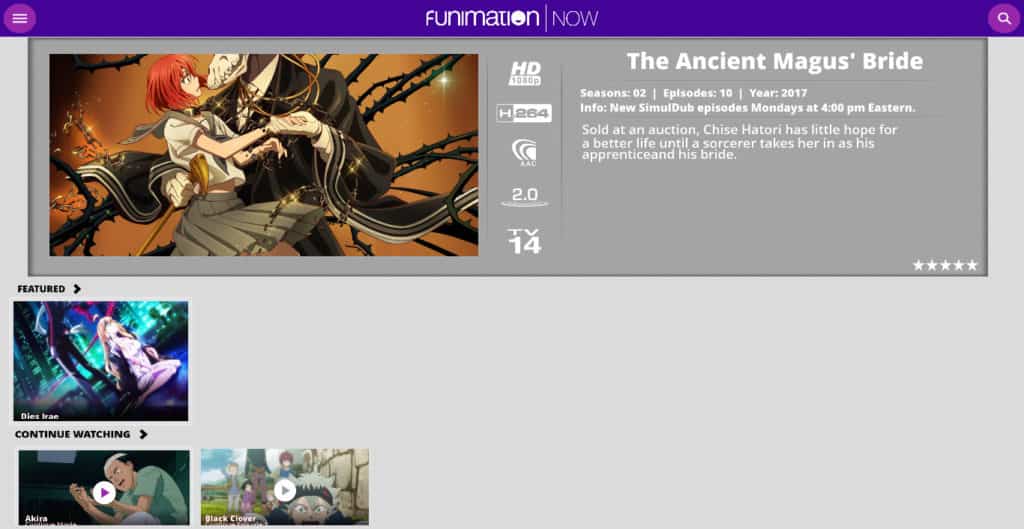 If you like anime dubbed in English, Funimation Now is the place to find it. For $5.99/month, Funimation Now allows you to watch a huge library of past anime series, including popular titles like Yu Yu Hakusho, Wolf Children, Cowboy Bebop, and Fairy Tail. It also allows you to watch episodes of new anime series in English 2-4 weeks after they originally air in Japan.

The service offers a free, 14-day trial if you want to try it out.  If you don’t want to pay after that date, you can cancel it and revert to a basic plan that allows you to still access some titles for free. Like Crunchyroll though, there is no way to sign up directly to the basic plan without first creating an account. The Funimation Now Kodi addon is compatible with both free and premium versions of the service.

There may still be a few subtitled anime left on Funimation Now. But since their partnership with Crunchyroll began, they have slowly been deleting these titles and focusing exclusively on dubbed content.

Funimation Now is in the official Kodi addon repository.

Related article: Best Kodi addons for anime and some to avoid

Tubi TV is a free movie and TV site. It contains a library of over 50,000 titles, including 116 anime series and movies. It has Bleach, Yu Gi Oh!, Death Note, Macross Plus, .hack//Roots, and many other highly-rated series, some of which are hard to find elsewhere.

For anime fans, the draw for Tubi TV is that you don’t need an account to use it. It offers free anime without making you jump through a bunch of hoops.

Like Crunchyroll, Tubi TV carries mostly subtitled anime. So if you prefer your anime dubbed in English, this may not be the right service for you.

Learn how to watch Tubi TV on Kodi. 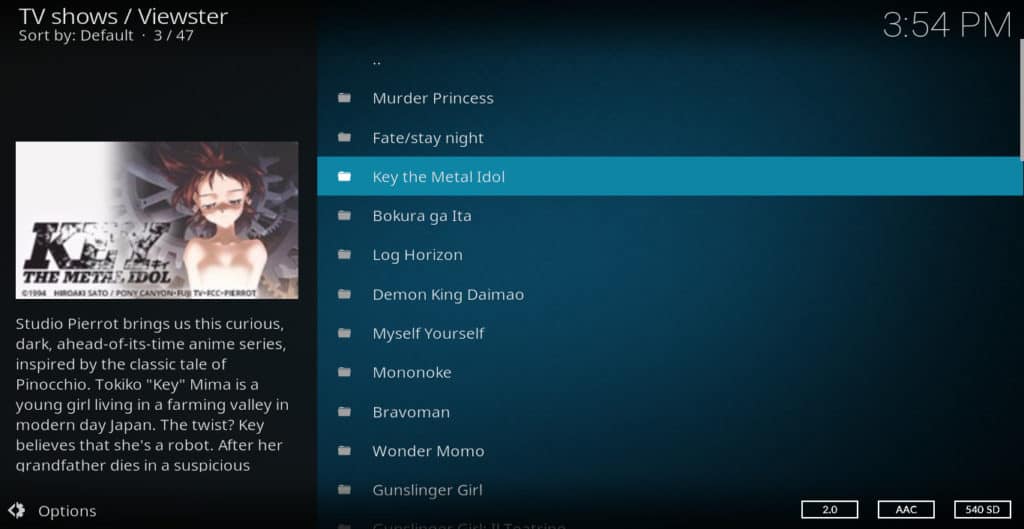 Viewster is another free TV and movie site similar to Tubi TV. It has over 60 anime series, including Murder Princess, Library Wars, and Dragon Half. Like Tubi TV, the site doesn’t require registration and does not offer a premium version of its service. When browsing through Viewster’s collection, all of the anime titles I found were subtitled.

SEE ALSO: How to install Viewster for Kodi

The Animetoon Kodi addon was a popular way to watch anime through Kodi. However, current versions do not work since the developer stopped updating it, and past versions pose a security risk. In addition, Animetoon provided unlicensed streams that didn’t promote the creation of new anime. A better alternative for Kodi users is to use the Crunchyroll Kodi addon to watch anime. The Funimation, Tubi TV, and Viewster addons can also be used for this purpose.