How to Watch Power season 6 Online from Anywhere

Want to watch the final season of Power? Read on to find out how to watch Power season 6 live online, from anywhere with the help of a VPN.
Mark Gill TECH JOURNALIST, VPN AND PRIVACY SPECIALIST 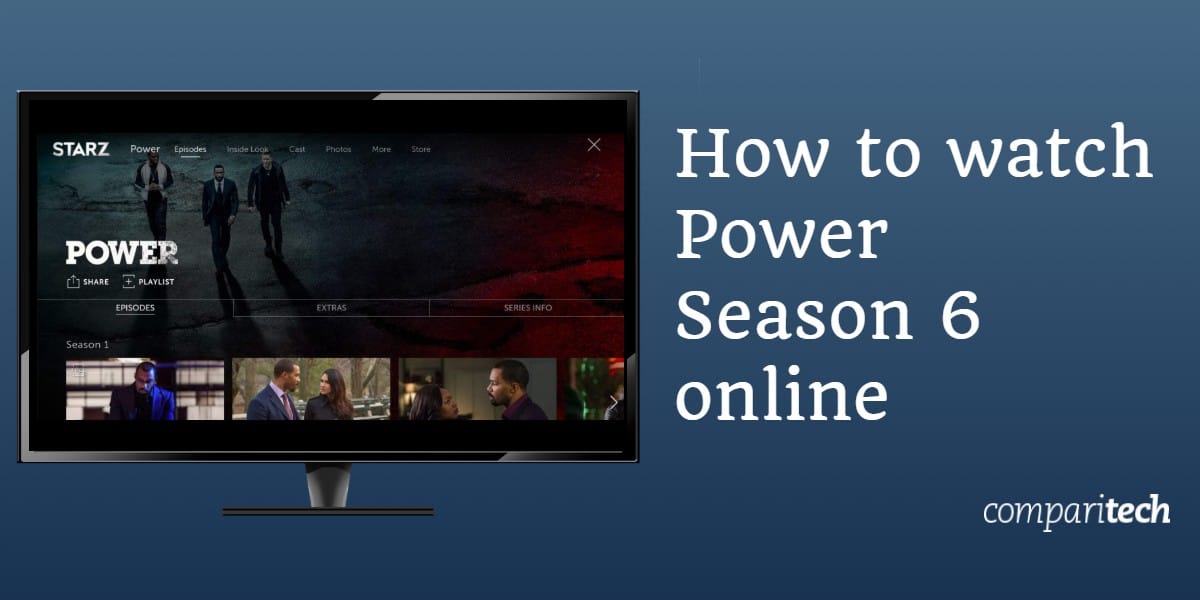 Power season 6 premieres on Sunday August 25. The season will consist of 15 episodes with the season finale expected in December 2019. However, the new season of Power will only available on region-locked streaming platforms. This means that you’ll need a VPN in order to watch Power outside of the US.

We will only be recommending official sources for watching Power. While some unauthorized streaming sites might broadcast Power season 6, these tend to offer poor quality video with major performance issues such as buffering and lag. Furthermore, such unlicensed streams are often taken down due to copyright issues, making them an unreliable choice to watch Power season 6.

Power season 6 is only available on region-locked streaming services. As such, you’ll need a VPN in order to watch it outside the US.

ExpressVPN is your best bet for watching Power season 6 online. It has servers in 20 US cities for unblocking popular streaming services. This includes the likes of Starz, Netflix, Hulu, and Amazon Prime Video. You can use this VPN to have up to five simultaneous connections. The servers are as fast as they are consistent which makes it a great choice for streaming as well as torrenting.

Another reason to choose ExpressVPN to watch Power season 6 is because it helps you stay safe online. Security is offered in the form of 256-bit AES encryption and a kill switch while there’s also protection from DNS and IPv6 leaks. ExpressVPN doesn’t keep any logs by which you can be identified. It also offers 24/7 live chat and email support and apps that are beginner-friendly.

BEST VPN FOR POWER SEASON 6:ExpressVPN is our top recommendation. A fast and highly secure service, it has servers in 20 US cities and unblocks Starz, Hulu, and Netflix. Use it to connect up to five devices simultaneously. Uses encryption and offers 24/7 support. Try it out risk-free with the 30-day money-back guarantee.

How to watch Power season 6 online with a VPN

If you want to watch Power season 6 online from anywhere, you’re going to need a VPN. Here’s a quick and easy guide to take you through it all:

If you’re still experiencing problems after going through the above steps, there are a few things you can do. The first thing to try is to clear your browser’s cache and cookies. This ensures websites and services forget your actual IP address and accept the US IP address of the VPN. If this doesn’t work, try connecting to another US server. Otherwise, you may want to contact your VPN’s customer support.

How to watch Power season 6 on US TV

Power season 6 is available on Starz which is a cable TV network. You can purchase Starz via your cable TV provider (prices vary by provider), or by purchasing via the Starz website or one of the apps ($8.99 USD per month). If you’re outside the US, your best bet is to subscribe to Starz via the website using a VPN (connected to a server in the US). New episodes of Power are available on the Starz app the same day as they air on Starz. You’ll also find past seasons of Power. What’s more, Starz comes with a 7-day free trial.

Unfortunately, Power is not yet available on Netflix US. However, the good news is that aside from watching on Starz, US users also have the option to watch on Hulu, on which seasons 1-5 are currently available. A basic Hulu subscription costs $5.99 USD per month but there’s also an ad-free option for $11.99 USD a month. Hulu includes a one-month free trial for new and eligible returning subscribers. To watch US Netflix outside of America you will need to change Netflix country with a VPN.

While Power isn’t available on Amazon Prime, you can purchase individual episodes on Amazon Video for $2.99 (HD) or $1.99 USD (SD). Alternatively, you can buy a full season. This may cost $9.99 or $12.99 USD, depending on how recent the season is.

Where else can I watch Power online?

The good news is that Power seasons 1-5 are available on streaming services in a number of different countries.

Power seasons 1-5 are currently available on Netflix UK. Better still, new episodes of Power are added every Monday after their initial US broadcast. As such, you should be able to watch Power season 6 on Netflix UK. Netflix UK monthly subscriptions are priced at £5.99, £8.99, and £11.99. However, Netflix also offers a 30-day free trial.

You can find seasons 1-5 of Power on both Netflix Australia and Stan, which is an Australian streaming service. These episodes were made available to stream soon after their US airing which means you’ll likely be able to watch Power season 6 on Stan as well. Stan subscriptions are priced at $10, $14, and $17 (AUD) a month. Like Netflix, Stan offers a 30-day free trial.

If you’re in Norway, Denmark, Sweden, or Finland, Power seasons 1-5 are on HBO Nordic. As such, season 6 is also likely to come to HBO Nordic in the near future. An HBO Nordic subscription costs 99Kr per month (approximately $10). This streaming service offers a one-month free trial.

Can I use a free VPN to watch Power season 6?

Free VPNs aren’t very good at unblocking streaming services such as Starz, Netflix, Hulu, and Stan. This makes it difficult to watch Power season 6 (or indeed any season of Power) with a free VPN. Besides, the slow speeds of free VPN services make them a poor choice for streaming with an excessive amount of buffering and lag.

It’s not just in streaming performance that free VPNs are a disappointment. They’re also known to lack security which means your online privacy may be compromised by using them. In particular, many free VPNs don’t even use encryption to keep your data secure. Others actually log your data and browsing activity before selling it to the highest bidder.

All in all, free VPNs don’t come close to the best VPNs for Starz and Power season 6. What’s more, the likes of ExpressVPN, NordVPN, and CyberGhost all let you try their service for free with a risk-free money-back guarantee.

What can we expect from Power season 6?

The dramatic conclusion of Power season 5 saw Kanan killed in a violent encounter with the police while Angela was shot in the chest by Tommy. Season 6 will focus on the now irreparable relationship between former drug partners and friends Ghost and Tommy. In particular, the story will follow Ghost’s plot for revenge following the actions of Tommy.

Which cast members will be returning for Power season 6?

Aside from Kanan (50 Cent), the rest of the Power cast are expected to return for season 6. This includes Ghost (Omari Hardwick), Tommy (Joseph Sikora), Tasha (Naturi Naughton), Tariq (Michael Rainey Jr.), Dre (Rotimi Akinosho), and La La (LaKeisha Grant). We don’t yet know the fate of Angela (Lela Loren) but she is expected to return in some capacity.

Will there be a Power season 7?

Sadly, season 6 is to be the final season of Power, as announced by executive producer Curtis Jackson (50 Cent) on social media in May 2019. However, he also revealed the news that four spinoff shows are planned. Series creator Courtney A. Kemp said they planned to “follow some of your beloved ‘Power’ characters beyond the scope of the initial series…”

What else can I watch on Starz?

Starz has a wide range of TV shows and movies on offer. It also offers its own original content (Power being one of them). Here’s a list of just some of the titles you can watch on Starz (apart from Power seasons 1-6):