How to watch The Flash Season 8 online from anywhere

Interested in finding out how to watch The Flash season 8 abroad? We’ll explain how you can live stream The Flash from anywhere, even abroad, using a Virtual Private Network (VPN).
Ian Garland Streaming, Kodi and VPN Expert 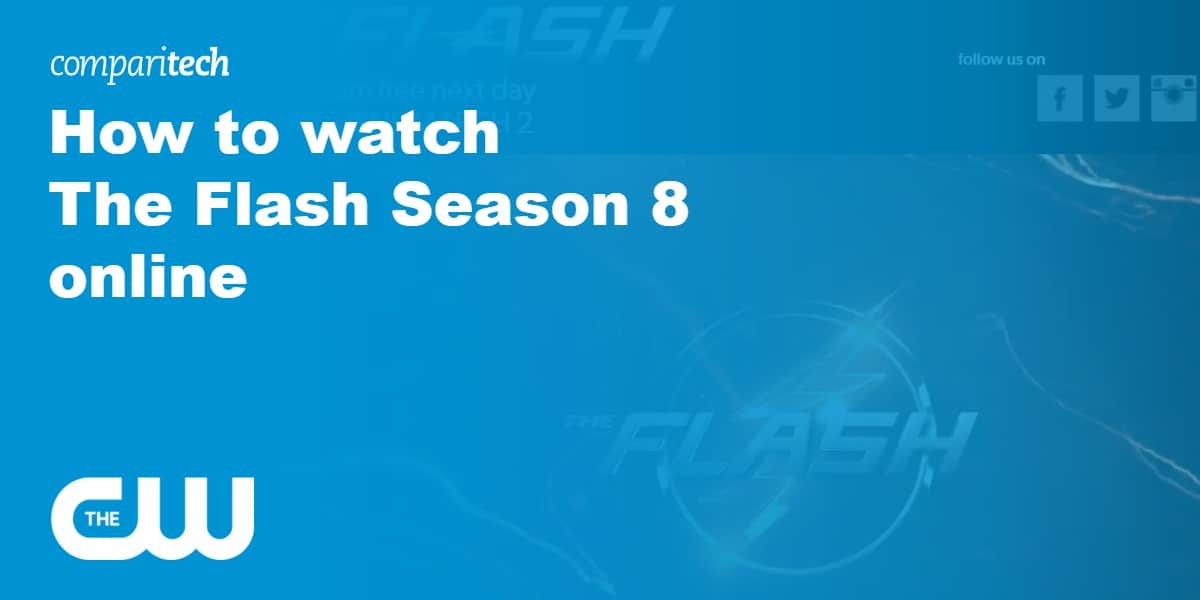 The Flash season 8 will premiere on November 16, with a new episode every Tuesday at 8 PM EST (5 PM PST / 1 AM GMT). While we don’t yet know how many episodes there’ll be in season 8, previous seasons have varied between 18 and 23 so we can expect it to be within that range. Below, we’ll let you know how to stream The Flash season 8 live online, from abroad.

This post will only be recommending official sources. As a popular series, The Flash is almost certain to have unofficial streams, but even putting aside their copyright violations, these are prone to being taken offline and often only available in standard-definition. Plus, new episodes are freely made available, so there’s no reason to resort to unlicensed streams.

The Flash season 8 will only be shown on geo-restricted platforms, so you’ll need a VPN to watch it on your usual streaming services while traveling abroad.

How to watch The Flash abroad with a VPN

VPNs might sound complicated to use, but they’re actually quite simple. By connecting to a server in another country, your true IP address is hidden and replaced with a new, region-specific one. This tricks region-locked sites into letting you access them abroad. Still confused? Just follow the steps below.

Here’s how to watch The Flash season 8 online from anywhere:

If you have time, we recommend performing the steps above before The Flash actually begins. This way, if anything doesn’t work as intended, you’ll have plenty of time to contact your VPN’s support team for help.

NordVPN is offering a fully-featured risk-free 30-day trial if you sign up at this page. You can use the VPN rated #1 for The CW with no restrictions for a month - ideal if you need a little time to test it out for yourself.

How to stream The Flash season 8 live online

The Flash is extremely popular and accordingly, is broadcast in several countries across the world. Take a look below to find out who’s showing season 8 in your country:

American fans can watch season 8 of The Flash on-demand on The CW. No registration or payment is required, but episodes are uploaded the day after they air, so if you’re a superfan, this method probably isn’t ideal.

Even though The CW website doesn’t have its own live stream, there are other ways to watch it online. Hulu with Live TV, FuboTV, and YouTube TV all include The CW, so if you’re subscribed to any of these services, you can just sign in and start streaming. All of these cost $64.99 USD per month. It should be noted that the first seven seasons are currently available on Netflix as well.

All of the sources above geo-block their content, so if you’re an American who’s currently out of the country, you’ll have to connect to one of your VPN’s US servers before you can watch anything. NordVPN comes with a risk-free 30-day money-back guarantee, meaning you can stream The Flash abroad and claim a full refund if you’re unsatisfied.

We don’t have an official British release date for The Flash season 8 yet, but in previous years, new episodes have usually arrived just a few weeks after they’re shown in the US. However, it should be noted that season 7 didn’t air until three months later. We’ll update this post as more information becomes available.

Luckily, we do know where you’ll be able to watch: Sky One. This channel can be streamed live online via the Sky Go app if you’re already a Sky TV customer. If not, don’t panic; you can just sign up for Now TV instead.

Now TV’s Entertainment pass enables you to live stream 11 channels, including Sky One. This pass costs £9.99 per month and comes with a 7-day free trial. The on-demand library currently includes all seven seasons of The Flash, meaning you still have time to catch up if you’re not quite up-to-date.

Sky Go and Now TV are only available in the UK. As such, you’ll need a VPN to access them abroad.

Normally, it’s very easy to watch The Flash in Canada. Usually, new episodes are added to Netflix each week. While this hasn’t been confirmed to be the case for season 8, it’s likely that fans will continue to be able to watch on Netflix. As a bonus, this service has every previous season too, so it’s a great time to get caught up.

If you’re not already subscribed, you’ll be pleased to know that Netflix’s basic plan only costs $9.99 CAD per month. You’ll have to use a VPN to access Netflix Canada if you’re currently in another country.

The locations above aren’t the only countries where The Flash will be broadcast. However, as CW hasn’t created a list of their international broadcasters, it can be difficult to find out where you can watch.

If you can’t find an official local stream, your only option may be to purchase episodes individually on platforms like iTunes, Google Play, or Amazon. It’s also worth remembering that you can still tune into streams from back home when you’re abroad, but you’ll have to connect to a VPN first.

The Flash season 8: what to expect

Starting with a five-part special event titled called “Armageddon”, The Flash season 8 sees the arrival of a powerful alien threat on earth. Needless to say, our heroes (Barry Allen as Grant Gustin/The Flash, Candice Patton as Iris, and Danielle Panabaker as Caitlin Snow and Frost) are pushed to their limits as they desperately battle to save the world. Indeed, Team Flash will need a little help and this comes from across the Arrowverse in the form of Ray Palmer/The Atom (Brandon Routh).