5 best VPNs for uTorrent and how to bind your IP

Need a VPN to use with uTorrent? We reveal the best uTorrent VPNs based on speed, security, and more. We also explain how to bind your IP address so files are only downloaded when your VPN is on.
Paul Bischoff TECH WRITER, PRIVACY ADVOCATE AND VPN EXPERT 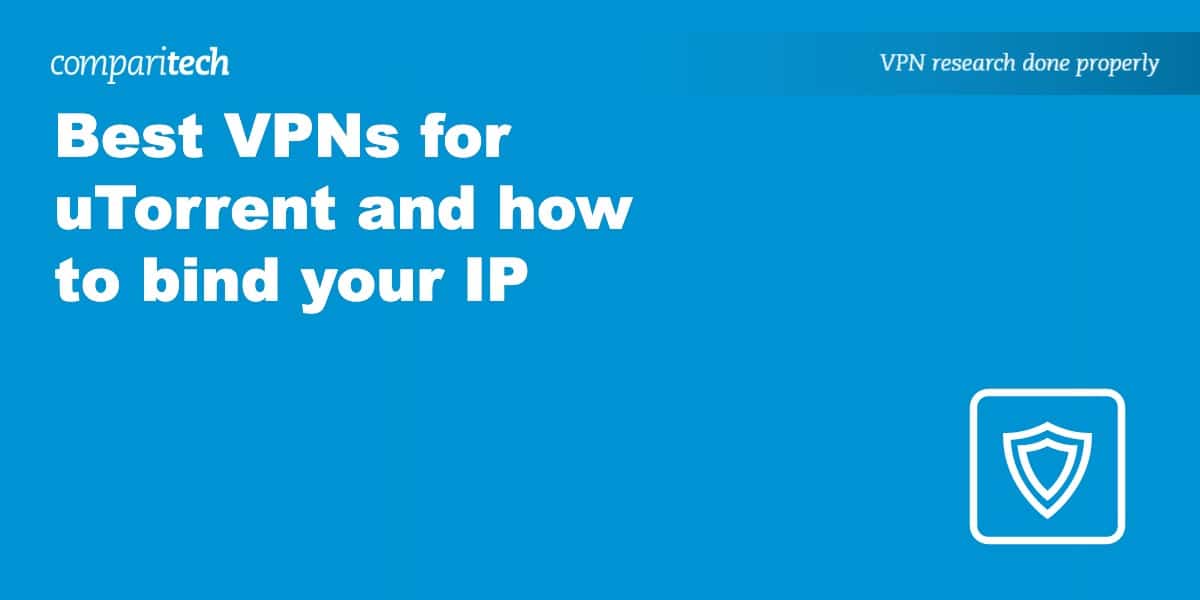 µTorrent, more commonly spelled uTorrent, is the world’s most popular BitTorrent client made outside of China. It’s the official client created by the people who invented the BitTorrent P2P protocol. Torrenting can risk your privacy as well. Because it is a network built for both uploading and downloading files, the protocol requires an IP address from each user. This is why we recommend using a VPN for uTorrent.

A Virtual Private Network (VPN) encrypts internet traffic traveling to and from your computer, which prevents your ISP and other entities from snooping on your online activity. Secondly, it routes all that traffic through a server in a location of your choosing. This both prevents your ISP from knowing the final destination of your internet traffic, and gives you a new IP address from which you can connect to the BitTorrent network.

This guide highlights which VPNs are the best for torrenting and specifically using uTorrent. Each of the VPNs is covered in detail, but if you are short of time, here is a summary list of the best VPNs for uTorrent:

NordVPN is offering a fully-featured risk-free 30-day trial if you sign up at this page. You can use the VPN rated #1 for uTorrent with no restrictions for a month—great if you want to download torrents safely without bandwidth throttling.

The best VPNs for uTorrent – At a glance

We’ve compared the most important features for the top VPNs here. Prefer to read the in-depth reviews? Start with NordVPN – our #1 choice for uTorrent.

The best VPNs for uTorrent

So which VPN is best for uTorrent users? We’ve narrowed down the following list based on a handful of important criteria:

Here’s a list of the best VPNs for uTorrent:

NordVPN is our first choice for a uTorrent VPN. It outperforms almost every competitor in our speed tests and is one of the most powerful VPNs available when it comes to security. Among its huge list of servers are nearly two dozen in the Netherlands. These include two “double-hop” servers, which tunnel one VPN through another VPN. This will slow down downloads slightly but make you next to impossible to track down. Servers are very fast and you’ve plenty to choose from. A kill switch can be enabled in the settings. Apps are available for Windows, MacOS, Linux, Android, and iOS.

BEST VPN FOR UTORRENT:NordVPN is our #1 pick. It pegs superfast speeds and works tirelessly with torrenting & P2P. Connects up to 6 devices simultaneously. Also works well with most popular streaming services. A 30-day money back guarantee makes it risk-free.

Surfshark is low-cost provider but doesn’t hold back when it comes to security and privacy. It’s based in the British Virgin Islands, a location with no mandatory data-retention laws. It secures your traffic using 256-bit encryption, protection against WebRTC, DNS, and IPv6 leaks, and a kill switch, but more importantly, Surfshark doesn’t log any information that could identify you. You can pay in one of three different cryptocurrencies for an additional layer of anonymity. 24/7 support is available over live chat.

Surfshark offers apps for MacOS, iOS, Windows, Android, and Linux. Manual configuration is required for use with wireless routers.

BEST BUDGET VPN:Surfshark offers unlimited connections and doesn’t restrict bandwidth so you can torrent on as many devices as you like. Best of all, this VPN includes a 30-day money-back guarantee.

ExpressVPN supports the OpenVPN protocol but also has its own superfast Lightway protocol. Both of these use 256-bit encryption which is extremely strong. No user activity is recorded, although the company does keep some metadata logs. It has several server locations in the Netherlands. Bandwidth is unlimited and speeds are among the most consistent we’ve ever recorded. Windows, Mac, and Android apps are all available, along with iOS and Linux. The company’s software also boasts a network lock, which prevents any traffic from leaking over your default IP address if the connection drops.

GOOD ALL-ROUNDER:ExpressVPN is suitable for beginners and advanced users alike. It has a vast server network that is optimized for fast connections. Subscriptions include a 30-day money-back guarantee.

IPVanish is known for its sizable network and lack of a connection limit. There are a few servers in the Netherlands to choose from. Traffic is encrypted with 256-bit AES, and no activity logs are stored. While not all the servers are as reliable as ExpressVPN, you’re sure to find a quick one with a bit of trial and error. Apps are available for Windows, Mac, and Android, among others. The OSX and Windows clients have kill switches, but not the Android version.

NO DEVICE LIMIT:IPVanish has a large network of servers. Generally solid for torrenters, Kodi users, and folks who need the highest standard of privacy. 30-day money back guarantee.

CyberGhost offers over 7,000 servers in 90+ countries. Apps are available for both Android, Linux and iOS as well as desktop support for Windows and MacOS. Encryption standards are stringent. CyberGhost Pro uses 256-bit AES encryption on the OpenVPN or WireGuard protocols along with 2,048-bit RSA keys and MD5 HMAC authentication. This means it’s in the top-tier of VPNs when based on sturdy encryption.

There’s also an internet kill switch included, which means web traffic will be halted if the connection drops unexpectedly.

You can’t be too careful when it comes to torrenting, which is why it’s so important to choose the right VPN for the job. Your provider will have to strike a balance between speed and security, and plenty of VPNs lean too heavily one way or another. Here are the key things we looked out for while researching the best VPNs for uTorrent:

We have a fairly intensive testing process here at Comparitech, and this was just the first stage. To find out more, read our full VPN testing methodology post.

How to bind your VPN IP to uTorrent

The uTorrent Windows client includes a built-in function to limit downloads to a specific IP address. This means you can set uTorrent to only download torrents while connected to a certain VPN server. If the connection to the VPN drops or you disconnect, the downloads stop. This prevents any torrent traffic from traveling over your default IP address, linking your device to your downloads.

Here’s how to IP bind uTorrent to a VPN server:

Unfortunately, the IP bind feature is not yet built into the Mac and Android versions of uTorrent. Some users have reported success on Macs using a workaround with either Tunnelblick or Viscosity, which replace the VPN provider’s app. Azureus Vuze, an alternative to uTorrent, supports this function for Mac.

If you don’t want to use a different app or BitTorrent client, make sure to turn on the VPN kill switch (sometimes called a “network lock”) included in your provider’s app.

Port forwarding is a contentious topic among uTorrent users. Some say it improves their download speeds by allowing their torrent client to connect to more peers outside the normal range of the VPN. Others argue it is unnecessary and, when using a VPN, only serves to make torrenting more difficult and can even degrade user privacy.

This is because all users sharing the same VPN IP address will all be limited to the same ports except for the one who chooses to port forward. That can make P2P activity more easy to trace back to a single user.

Most commercial VPN clients don’t support port forwarding and work fine without it. For those that do, enter the forwarded port into the uTorrent settings by doing the following:

Port forwarding in a VPN does not require forwarding ports in your router. You may need to disable NAT-PMP and/or uPNP mapping in the torrent client.

Read more: Is Torrenting Safe? Is it illegal? Are you likely to be caught?

Can I use a free VPN with uTorrent?

Free VPNs aren't really suitable for torrenting (and some expressly forbid you from doing so). The first main problem is that these services tend to have fairly strict bandwidth limits. This prevents you from using P2P networks as much as you might like, and could result in you having to wait until the following month to finish downloading something securely.

Additionally, free VPNs are usually fairly slow. Even assuming you find one with no data limits at all, your downloads will likely take far longer than if you had signed up for a paid VPN. It's worth mentioning that most major VPNs offer a money-back guarantee, so you can always try a service out before deciding whether to keep it or not.

No, using uTorrent isn't illegal. The uTorrent software is entirely legal to install on your device, and downloading torrents is also legit in most countries, but if torrents contain unsolicited and copyrighted material such as movies, TV shows, music, or software, it then becomes illegal to use the application.