Looking to watch YuppTV online when abroad? This over-the-top provider of South Asian content gives you access to channels such as ZeeTV, BBO, KBO, and ET Now. In this post, we’ll show you how you can live stream YuppTV wherever you are in the world. We’ll explain how you can use a Virtual Private Network (VPN) to bypass regional restrictions and watch YuppTV from Canada, New Zealand, Japan, France, Germany, and anywhere else in the world. 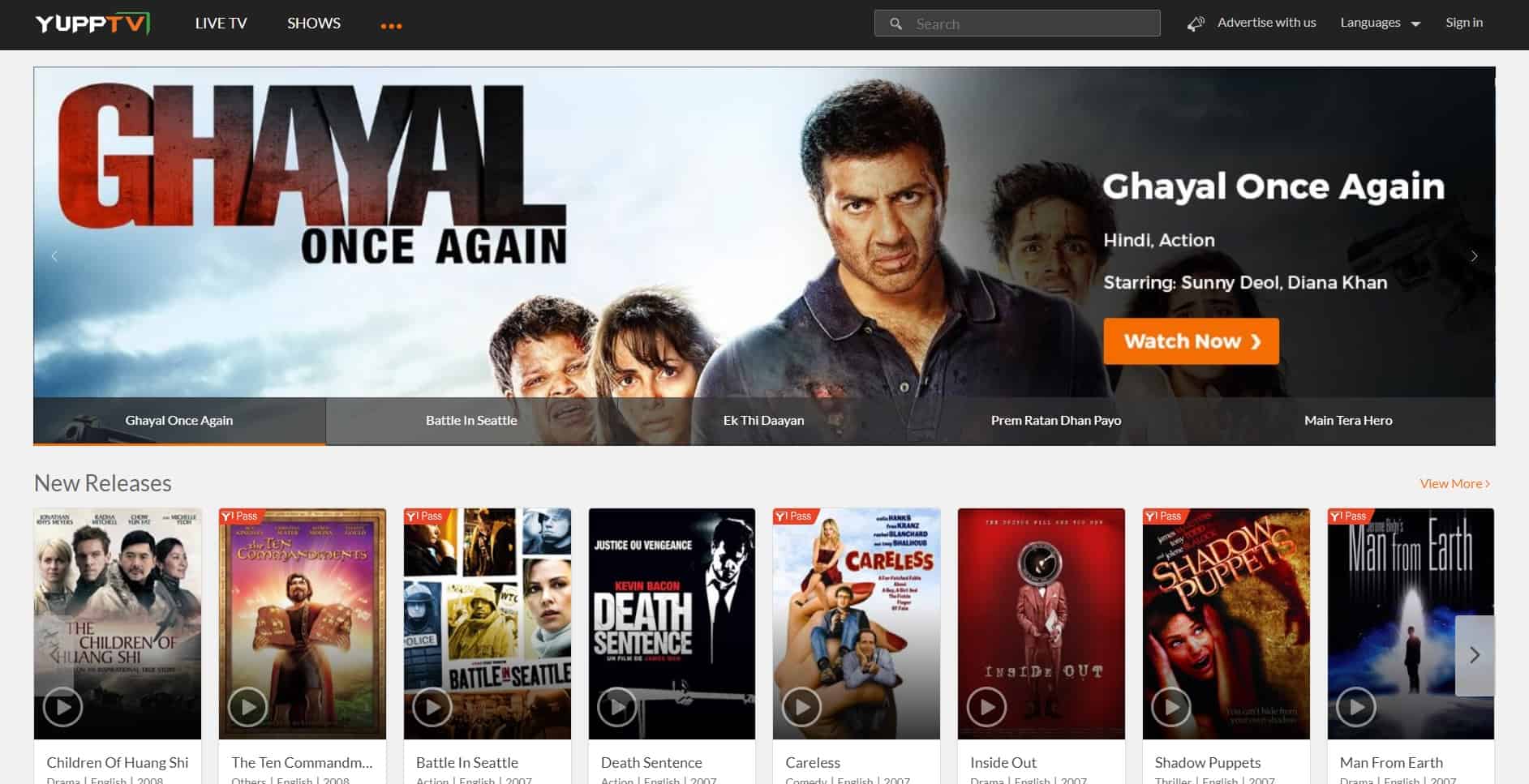 Usually, streaming platforms only have the rights to show their content in specific regions. And some, like YuppTV, will show different content depending on where you’re located. However, VPNs enable users to connect to servers in a country of their choosing. This tricks websites into believing they’re actually located in that country and unblocks geo-restricted content. VPNs also encrypt your traffic, which prevents your activities from being monitored by hackers, your internet service provider, or network administrators.

Choosing the right VPN is vital as each is slightly different. For example, some prioritize security above all else, while others offer higher speeds or the ability to unblock a wider range of streaming platforms. To find the best VPN for YuppTV, we looked for services with the following characteristics:

How to unblock YuppTV with a VPN

Don’t worry if you’ve never used a VPN before: unblocking geo-restricted content is pretty straightforward once you know how. Here’s how to unblock YuppTV with a VPN:

HOW TO GET A PREMIUM VPN FOR FREE: Often, to get the lowest price for a given provider, you’ll be asked to sign up for several years of coverage at a time. However, if you only need a VPN for a short time (for instance, if you’re on vacation or want to watch a specific event), you can use ExpressVPN’s 30-day trial. You will have to pay upfront but you can cancel within 30 days to get your money back.

Here is our list of the best VPNs for YuppTV:

ExpressVPN has more than 2,000 servers spread across 94 countries, making it an excellent choice for those looking to stream live video. It’s fast enough to watch HD content with no noticeable lag, and best of all, capable of unblocking a huge variety of streaming platforms including Netflix, BBC iPlayer, and YuppTV.

There’s a good range of security features built in too. ExpressVPN uses 256-bit encryption, a kill switch, perfect forward secrecy, and DNS leak protection to keep your traffic secure at all times. It doesn’t log any information that could identify you, which is a huge plus. If you’re having difficulty, customer support is available 24/7 via live chat.

This service has apps for MacOS, Windows, Linux, iOS, and Android devices. With a little manual configuration, it can even be installed on your wireless router.

BEST VPN FOR YUPPTV:  ExpressVPN is out #1 choice. ExpressVPN has great speeds, great privacy features and work with all popular streaming services. Includes a 30-day money-back guarantee so you can try it risk-free.

NordVPN boasts an almost unheard of 4,853 servers, some of which are optimized for streaming, file sharing, or gaming. It’s a great general-purpose VPN, in no small part thanks to its superior unblocking capabilities. NordVPN easily bypasses geo-restrictions on platforms such as Hulu, Netflix, and Amazon Prime Video, so YuppTV doesn’t pose much of an issue.

With NordVPN, you have the freedom to create highly sophisticated security setups. 256-bit AES encryption and DNS/IPv6 leak protection are enabled by default, but you can also make use of an application-specific kill switch. There’s even the option to use two VPNs at once, or use Tor with a VPN. NordVPN doesn’t log any personally identifiable information and accepts bitcoin payments, enabling you to stay as anonymous as possible online.

NordVPN has easy-to-install apps for Windows, Android, MacOS, and iOS. It also works on Linux-based devices and selected network routers, although manual configuration is required.

BEST BUDGET OPTION: Reduce your monthly payment to just $3.99 by signing up for NordVPN’s two-year plan. This cuts the cost by a whopping 66%.

With more than 2,500 servers and a highly streamlined interface, CyberGhost makes staying safe online very simple. Users can choose a server manually or be assigned one best suited for a specific task like unblocking streaming sites or torrenting anonymously. You’ll find that not only does CyberGhost enable you to unblock YuppTV, but you’ll also be able to watch live HD content with no lag, and no noticeable buffering.

This service keeps your information secure using 256-bit encryption, an ad-blocker, automatic malware checking, automatic HTTPS redirection, and a kill switch. It protects against DNS, IPv6, and port forwarding leaks. CyberGhost doesn’t log any session or traffic data, so your activities can’t be traced back to you.

SIX MONTHS FREE: Choose CyberGhost’s annual plan to save more than 70% and get an extra six months coverage at no extra cost.

IPVanish has several characteristics that make it a strong choice for streaming. First, it has 1095 high-speed servers spread across 60 countries, meaning you’ll be able to watch YuppTV live with no problems. Then there’s its excellent multi-platform support, and the fact that you can have up to ten simultaneous connections per account. This is unheard of: most VPNs only allow between three and six.

As you’d expect, IPVanish comes with 256-bit encryption, protection against DNS and IPv6 leaks, and a kill switch enabled by default. However, there are a few more advanced options to choose from: you can also block local traffic, change your IP address at set intervals, and obfuscate OpenVPN traffic. IPVanish doesn’t record any personally identifiable information, meaning they can’t divulge details of your activities, even if asked to.

This VPN is one of the few to be included in the Amazon Fire Stick app store. There are additional apps for MacOS, Windows, iOS, and Android devices, although you’ll have to install it manually on Linux platforms and routers.

EXCLUSIVE OFFER: Our readers can save up to 60% on IPVanish plans. Each of these comes with a seven-day, risk-free trial. If you’re unsatisfied, you can cancel and receive a full refund.

PrivateVPN has just 78 servers worldwide, but it provides higher speeds than many similar services. It’s excellent at unblocking sites with aggressive geo-restrictions, even major platforms like Netflix and BBC iPlayer. With up to six connections allowed at a time, you’ll be able to stream YuppTV online easily and in the highest quality, without any buffering.

256-bit encryption is enabled by default, as is DNS and IPv6 leak protection. PrivateVPN includes a kill switch that stops all traffic upon losing connection to the VPN. This service doesn’t log any data that could identify you, so you’re guaranteed peace of mind when browsing. Live chat is available 24/7 in case you need help, and the staff can even remotely install the software for you, with your permission.

This service offers apps for Android, iOS, Windows, and MacOS devices. Linux systems and routers must be configured manually.

FAST SPEEDS: PrivateVPN’s annaul plan has a discount of over 70% making it great value for a good all-round VPN which has impressive speeds.

Can I watch YuppTV with a free VPN?

Free VPNs can be an appealing prospect, but we strongly advise against their use for several reasons. First of all, their infrastructures lack the resources to keep up with user demand. This has led some free VPNs to institute monthly data caps and queuing systems. These factors make free VPNs unsuitable for streaming: even if your video loads, it’ll likely stutter and buffer for long periods of time. Further, many platforms have stepped up their geo-locking measures of late, with free VPNs among the first services to be blocked.

You might ask yourself how a free VPN can afford to operate. Users don’t pay for the service, so income has to be generated through other methods. Usually, free VPNs will insert ads into the sites you visit, but that’s not the only way they make money. They can also use tracking cookies to keep tabs on you, even after you’ve disconnected. The information these cookies collect can then be used to build a consumer profile to be sold to the highest bidder without your knowledge.

Far from increasing your security, these services actually pose a significant security risk. One 2016 study showed that dozens of apps purporting to be free VPNs didn’t actually encrypt any network traffic at all. Further, many of these attempted to install malware on the user’s device. And it’s not just little-known apps that are a threat: we’ve even seen a well-known service sell its users’ bandwidth to help run a botnet. To protect yourself and your personal information, we recommend using a reputable service with a proven record of putting its customers’ privacy first.

Where is YuppTV available?

YuppTV is currently available in more than 90 countries including the UK, the US, Canada, Australia, New Zealand, Malaysia, India, and several locations in the Middle East. However, similar to Netflix, YuppTV has different content libraries for different countries.

For most countries, listings will be shown in India Standard Time (IST). However, there are a few locations with different rules:

If you’re in the US, you can choose to display listings for most channels in either IST or CST. However, ZeeTV, Zee Cinema, and Star Vijay will only show program start times in EST.

If you’re in Australia, most channels will have IST listings. The only exception is ZeeTV, which shows listings in AEST.

Subscribers can choose to watch using the online web player, or via the YuppTV app for Android and iOS. Additionally, YuppTV can be installed on Apple TV, Android TV, Roku, and some smart TVs.

What can I watch on YuppTV?

YuppTV offers a wide range of live and on-demand content. Below, we’ve listed some of its most popular offerings:

Currently, YuppTV has videos in Hindi, Tamil, Telugu, Marathi, Malayalam, Bengali, Oriya, Punjabi, Kannada, Bhojpuri, and Gujarati. Each language has its own selection of available content packages. For example, the basic Hindi package includes 177 channels, but the equivalent Marathi package only includes 132. These subscriptions all have the same price, however: $12.99 USD per month.

Unfortunately, this service is fairly inconsistent when it comes to subtitles. Some on-demand videos have subtitles in various languages, while others have subtitles in just one or two languages. There are even selected titles such as Kabali that provide English-language captions, although there’s no way to search for such content exclusively.