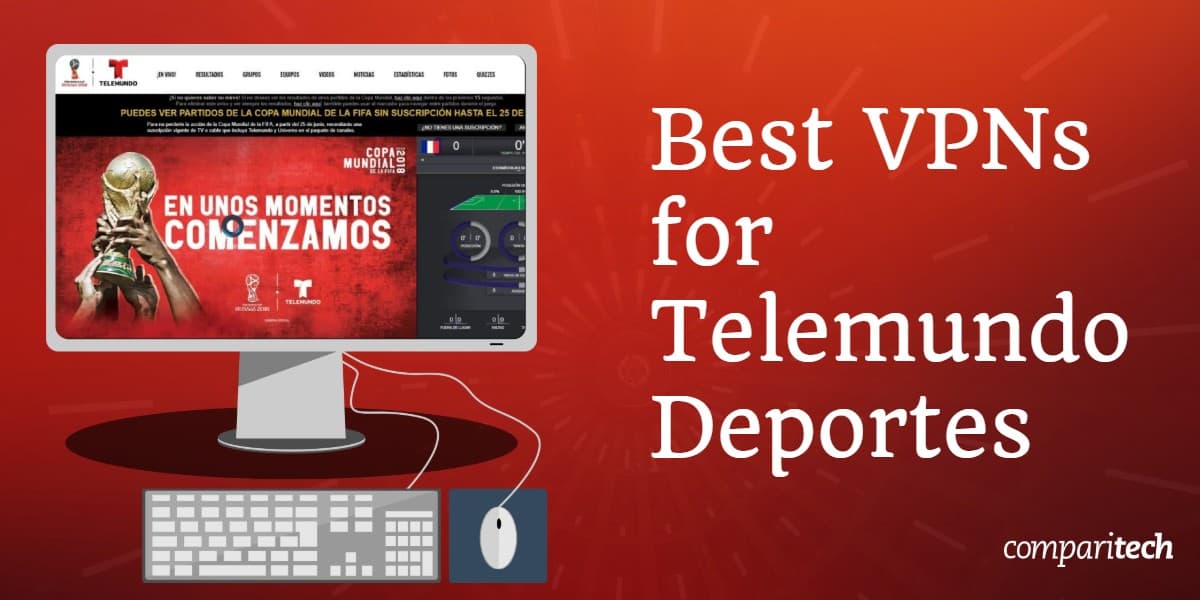 Telemundo Deportes is one of the biggest Spanish language sport streaming platforms in the world. Now owned by NBCUniversal it was originally launched in 1987 and has now built up a massive following.

Generally, streaming services only have the rights to show their content in specific countries. Many check the user’s IP address to see if it comes from a valid region, and if not, the content is hidden. By connecting to one of your VPN’s servers in the correct country though, you can trick the site into letting you watch content regardless of your actual location. For instance, a US server could unblock NBC Sports and FOX, while a Mexican server might unblock TyC Sports or ESPN Latin America.

If you try to watch Telemundo Deportes from outside of the US, without using a VPN, the content will just load endlessly. You may also see a message saying “This video is unavailable if an ad blocker is running – Please disable and reload the page to start the video.”, regardless of whether your ad-blocker is turned on or not.

Want to stream Telemundo Deportes from anywhere in the world? While this platform tries to prevent users in other countries from tuning in, it’s actually pretty easy to access if you use a Virtual Private Network (VPN). Today, we’ll explain how to bypass regional blocking and watch Telemundo Deportes from the UK, Canada, Mexico, Spain, or any other country in the world.

There are plenty of details below on each of the VPNs that made this list, but in case you are short of time, here is our list of the best VPNs for Telemundo Deportes:

The best VPNs for Telemundo Deportes

Not every VPN is the same. There can be a huge difference in terms of speed, security, and customer support from one service to another. To find the best VPNs for Telemundo Deportes, we looked for services with the following characteristics:

Here is our list of the best VPNs for Telemundo Deportes:

ExpressVPN has 29 high-speed servers spread across the United States. These are fast enough to stream live content without any noticeable buffering or lag. Additionally, with up to three simultaneous connections allowed and the ability to unblock services like Netflix, NBC, and ESPN, you can watch wherever, and whatever, you like.

With 256-bit encryption, a kill switch, DNS leak protection, and perfect forward secrecy, this service ensures your activities stay private at all times. Further, ExpressVPN doesn’t keep any activity or connection logs, meaning they couldn’t reveal your activities even if asked to by a third party. Customer support can be contacted 24/7 by email or live chat.

This service has apps for Windows, Android, MacOS, iOS, and Linux. Certain wireless routers are supported but must be configured manually.

BEST VPN FOR Telemundo Deportes:ExpressVPN is our #1 Choice. A fast and reliable choice which unblocks Telemundo Deportes and all major streaming services including US Netflix, Hulu, HBO, and Amazon Prime. Great security and privacy features and keeps no logs. Try it risk-free with the 30-day money back guarantee.

NordVPN has an exceptionally vast server network, with more than 1600 in the US alone. Better still, each of these is optimized for streaming high-definition content. This service can unblock popular platforms including Netflix, BBC iPlayer, and Amazon Prime Video. Since you’re permitted up to six connections at once, a single account allows you to protect all of your favorite devices.

This VPN is designed to allow for advanced security setups. It uses 256-bit AES encryption by default, but you can also turn on its kill switch, automatic ad-blocking, malware monitoring, Tor over VPN, or double VPN options. NordVPN can be paid for in Bitcoin and doesn’t record any personally identifiable information, so you can both register and use the internet anonymously.

CyberGhost is a user-friendly VPN with a twist: you can simply choose an activity like torrenting or unblocking websites, and be assigned a suitable server. There’s also the option to choose a server manually (there are 345 in the US), but having a one-click way to access platforms like Netflix, Telemundo Deportes, and ESPN is definitely very helpful.

This service doesn’t require much configuration. 256-bit encryption and protection against DNS, IPv6, and port forwarding leaks are enabled by default. There’s also a kill switch, forced HTTPS, ad-blocking and anti-malware features in case you’d like some more robust protection. CyberGhost has a no-logging policy which ensures your activities remain private.

BEGINNERS' CHOICE:CyberGhost has a simple set up. A budget choice. Good on privacy. Streams Telemundo Deportes in HD video reliably but connections not as reliable for some other streaming sites. 45-day money back guarantee.

IPVanish boasts an expansive network of self-maintained servers across the world. This allows it to resolve problems more quickly than its competitors, but it also means faster speeds for the user. IPVanish is fast enough to stream 4K video without any stuttering, and with minimal buffering. It can unblock a variety of services including FOX Sports, ESPN, and Sky Sports.

LARGE SERVER NETWORK:IPVanish works with up to 10 connected devices. Fast connections, lightweight easy to use apps, good multi-platform support. Reliable with Telemundo Deportes but can’t unblock as many other streaming services as some of its rivals. 7-day money-back guarantee.

Despite having fewer servers (ten in the US) than some similar services, PrivateVPN manages to provide above-average speeds. Further, it has excellent unblocking capabilities and will let you access hundreds of services including Netflix, FOX Sports, and Hulu no matter where you are in the world.

PrivateVPN uses 256-bit encryption and prevents both DNS and IPv6 leaks. Its kill switch guarantees you’ll never browse unprotected, and the no-logs policy ensures that neither your session or activity information is recorded. Six simultaneous connections are allowed, so this VPN is a good choice for people looking to protect lots of devices at once. Support is available 24/7 via live chat.

This service has dedicated apps for Windows, Android, MacOS, and iOS devices. Linux platforms and certain routers are also supported but must be installed manually.

GREAT SPEEDS:PrivateVPN is a good family choice. Unblocks Telemundo Deportes and allows up to 6 devices on the same account. 30-day money back guarantee.

How to watch Telemundo Deportes with a VPN

Can I watch Telemundo Deportes with a free VPN?

While free VPNs can seem like an easy way to protect yourself online, they actually have several significant drawbacks. First, they tend to have more users than their infrastructure can support. This causes slow speeds and intermittent connections — the last things you want when streaming live video. Additionally, because copyright holders are trying their hardest to block VPN users from accessing their content, it’s likely a free VPN just won’t work.

You might ask yourself how a free VPN can afford to exist. Because these services can’t charge users up front, they’ve had to find other ways to make money. In some cases, they simply insert ads into the sites you visit, but some free VPNs even use tracking cookies to build a detailed consumer profile from your activities. This can then be sold to third parties without your knowledge.

The risks are far greater than targeted ads, however. One 2017 study showed that almost 20% of sampled free VPNs for Android didn’t encrypt your data at all. Further, 38% came bundled with some form of malware. It’s not just mobile devices, though: we’ve even seen free, desktop-based VPNs sell their users’ bandwidth to be used in botnets. To keep your personal information secure, we recommend using a well-established, reputable VPN service with a history of protecting its customers’ privacy.

Do I need to register for Telemundo Deportes?

While you can watch selected video clips without registering, you will have to sign in to watch live content. There is one exception to this; the World Cup will be available for free until June 25.

Telemundo Deportes asks users to sign in with their cable provider credentials. There’s a huge selection of supported providers, including some popular over-the-top options like Sling TV, YouTube TV, and DirecTV. However, you can only sign up to these services from within the United States. Even a VPN can’t help with this part since they check to see that your payment method is registered to an American bank account.

Unfortunately, these factors make it all but impossible to register for Telemundo Deportes from outside the US unless you have an American friend willing to share their cable login details. That said, if you’re American and simply want to watch when abroad, that’s no problem whatsoever.

What can I watch on Telemundo Deportes?

As America’s only official broadcaster with Spanish coverage of the 2018 World Cup, Telemundo Deportes is already pretty appealing. While this service’s main focus is on soccer, it also provides news and highlights regarding several other sports. We’ve included a small selection of what Telemundo Deportes covers below.