We take a look at the best VPNs for Television New Zealand (TVNZ) so you can watch it from abroad. We’ll show you how to unblock TVNZ from anywhere and reveal the best VPNs for the job.
Osman Husain Tech journalist, VPN and streaming expert 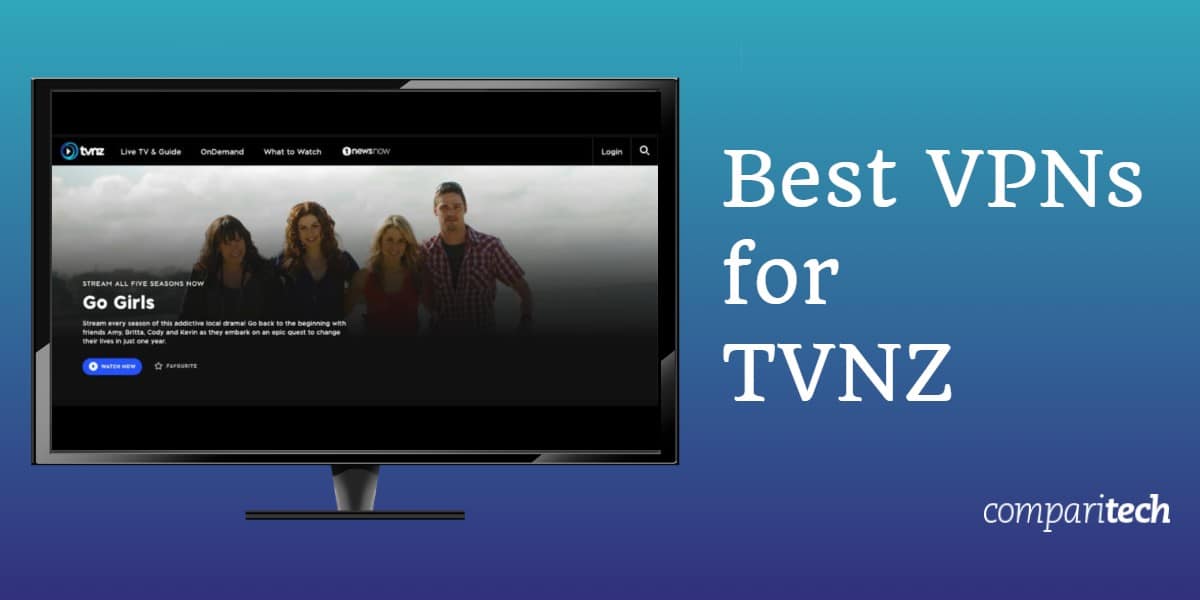 If you try to watch TVNZ abroad without a New Zealand IP address, you’ll be blocked from proceeding further. The best way to overcome this restriction is to use a Virtual Private Network (VPN) to make it seem as if you’re in New Zealand. In this article, we’ll discuss how to unblock the service and reveal the best VPNs for TVNZ.

VPNs hide your actual physical location by encrypting all the traffic flowing to and from your device and tunneling it via an intermediary server. Even if you’re not present in New Zealand, simply signing up with a VPN service and selecting a server in the country will assist you in obtaining a local IP address. A VPN will enable you to watch TVNZ in France, Canada, Australia, the US, Japan, the UK, or anywhere else in the world. If you don’t want to read the whole article, here are our top 5 picks for unblocking TVNZ:

VPN services exist in abundance across the internet but they don’t all fall into the same category. To help you come to a decision, we’ve compiled a list of the best VPNs to watch TVNZ. They’ve been analyzed based on the following factors:

Take a look at our list of the best VPNs you can use to watch TVNZ when you’re abroad:

ExpressVPN is one of the fastest VPNs out there. It ranks at the top of our list because of its superior service, military-grade encryption, and ease of use. It’s ideal for users who want a plug-and-play solution.

This provider has a proven ability to unblock geo-restricted content. It’s compatible with Netflix, Hulu, BBC iPlayer, ESPN, Fox, Sky, and more. ExpressVPN’s server network is scattered across the globe. At the moment, it offers more than 2,000 servers spread across 94 countries, with New Zealand included in the list.

ExpressVPN has a policy of not storing any detailed user data. There’s a bit of non-identifying metadata retention, such as popular servers and time of connection, but individual IP addresses won’t be recorded.

A single subscription will grant access to five devices concurrently. Apps for both Android and iOS are available as well as desktop clients for Windows and MacOS. ExpressVPN can be configured to some wifi routers and has its own custom router firmware.

BEST FOR TVNZ:ExpressVPN is our top choice due to its robust, fast speeds as well as superior customer service.

NordVPN is a great choice if you’re looking for a fast connection that works with HD video seamlessly. This provider is a known favorite with privacy advocates as well.

The Panama-headquartered company currently offers more than 5,100 servers in 62 countries. New Zealand is included in the list and hosts 21 servers. The service works with a range of streaming providers, including US Netflix and TVNZ. Some nifty features include a server record which shows the current latency and server load so you can pick and choose the one that’s most suitable.

NordVPN is an example of a completely logless VPN service – the company doesn’t store any user data.

Apps for both Android and iOS are available as well as desktop clients for Windows and MacOS. A single subscription grants access to six devices at the same time.

EXCELLENT FOR PRIVACY:NordVPN offers lots of customizable features at a price you can’t beat.

CyberGhost, which is based in Romania, has made a concerted effort to improve its video streaming capabilities ever since it underwent a management shuffle last year. It’s now considered to be one of the top VPNs from a video streaming standpoint. It combines this core offering with a large server selection, resolute encryption, and an easy-to-use interface.

Currently, this provider offers access to more than 3,100 servers in 60 countries, including New Zealand which hosts 10. Other streaming services it works with include Netflix, Hulu, and BBC iPlayer. In our user review, we noticed quick speeds and no noticeable lag with HD video streaming. The service comes bundled with a bunch of additional security features, including an ad blocker, anti-malware defense, and anti-tracking.

A paid subscription grants simultaneous access to up to seven devices on a single plan. The company supports both Android and iOS, and there’s native software for Windows and MacOS too.

IDEAL FOR NEWCOMERS:CyberGhost is fast, intuitive, and very easy for beginners to get started with. Its roster of services is also on the upswing.

IPVanish offers fast connections to most parts of the world. It isn’t very pricey and has nifty cloaking technology embedded.

At the time of writing, this provider offers more than 1,100 servers spread across 60 countries, including New Zealand which hosts four. Some of the other streaming services it unblocks easily are HBO Now and Sling TV.

IPVanish is known as a ‘no-logs’ provider, because of its internal policy of not storing any user data. It also allows for 10 devices to connect at the same time – far more than the normal industry offering of five.

This provider is particularly popular with Kodi users because it enables them to download the Android APK directly to their device. The interface is remote control-friendly for Kodi devices that don’t have a keyboard and mouse.

TORRENTING & STREAMING VPN:IPVanish is ultra-secure, quick, and a favorite with streamers and torrenters. It adheres to a no-logs policy and comes with all the bells and whistles of a modern VPN.

PrivateVPN is primed for both speed and location-evading tech. It’s a relative newcomer to the world of VPNs but don’t let that dissuade you from opting for the service. In our user review, it displayed impressive speeds and streamed HD video without any lag. At the moment, it offers servers in 57 locations including New Zealand.

As we mentioned earlier, PrivateVPN is an excellent choice for unblocking geo-restricted video streams. Some of the providers it works with are Netflix, BBC iPlayer, and ITV Hub, and there are lots more. Unblocking TVNZ should be straightforward.

PERFECT FOR STREAMING:PrivateVPN unblocks a plethora of streaming sites. It focuses on quality as opposed to quantity in order to get the job done.

Should I use a free VPN to access TVNZ?

As we’ve tried to explain in this article, you can only watch TVNZ if you have an IP address from New Zealand. This means you need to be resident in the country or have access to a high-quality VPN service that effectively obfuscates your location. Free VPN services might come across as attractive for the everyday user, especially when you consider that there isn’t an upfront cash payment involved. However, that’s where the charm usually ends.

Such services don’t offer the same levels of encryption, speed, or customer support that paid VPNs do. They’ll ship with the choice of only one or two servers, regularly induce bandwidth throttling, and impose wait times to connect when there’s network congestion. In all likelihood, you will receive a ton of invasive advertisements, so be prepared for a subpar streaming experience.

In addition, free VPNs have, in the past, been accused of data pilferage, turning idle user bandwidth into botnet armies, and spreading malware. Our recommendation is to avoid free VPNs. It’s best to invest a few dollars and get a paid VPN service for peace of mind.

I’m getting an error message for TVNZ. What do I do next?

Attempts to access TVNZ from an unsupported location will be greeted with the following error message:

“Whoops! Seems like you’re trying to watch from outside of New Zealand. Our videos are only available to watch within New Zealand due to rights issues” 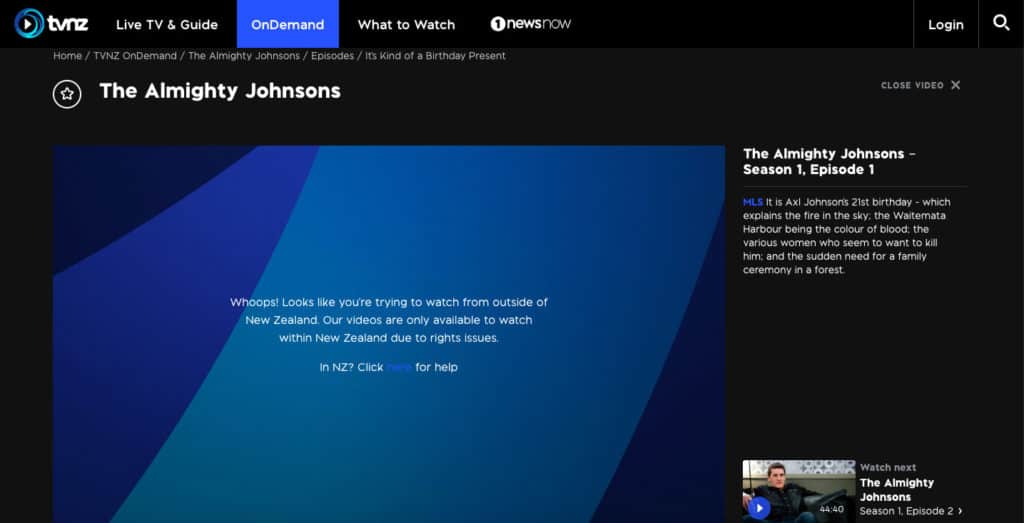 Regular TVNZ streamers don’t need to register for the service prior to logging on. But that’s because it’s a state-funded broadcast service. Even if you normally stream TVNZ from within New Zealand, there’s no grace period for you to be able to stream it abroad for a few days before you are locked out. Every user is subjected to the same restrictions. If you want to continue streaming outside New Zealand, you’ll have to purchase a VPN. Just sign up for one of the recommended providers on this list, spoof your location, and sit back to watch your favorite content.

The online version of TVNZ streams full-length shows, movies, and live broadcasts of individual channels. Some popular titles are:

Why is TVNZ geo-restricted?

Television New Zealand is the state broadcast service. That means it receives funding from the government and its roster of content is only meant to be consumed by New Zealand taxpayers. It’s also likely that TVNZ has negotiated rights to broadcast content based on this specific intention – if it were to allow its platform to be accessed from anywhere in the world, then that will likely lead to copyright and licensing problems. As such, it needs to impose geo-restrictions measures.

How to watch TVNZ on Chromecast, Android Box, Apple TV, and other devices

These devices don’t offer native support for VPN apps, so you can’t just download the software and follow the step-by-step instructions. However, there are workarounds.

One way to get VPN support is by configuring one to a virtual router – this is possible because any PC with a wifi card can also transmit its own wifi signals, similar to how smartphones can set up wifi hotspots.

You may want to read our tutorials on how to set up a VPN on a virtual router for Windows and Mac devices.

If you’re looking to install a VPN on Chromecast, you can read our guide on how to do just that.

You can also set up a VPN on a physical router if the firmware supports it. One such firmware is DD-WRT, a free and open-source option that works on a wide range of router models. Premium VPN providers also offer tutorials on how you can set up their individual apps on routers; more detail is provided on their individual sites.