How to watch Britannia Season 2 online from anywhere

Excited because Britannia is finally about to be released in the US? We’ll explain how you can get up to speed with this action-packed drama and let you know how to watch Britannia season 2 from anywhere using a Virtual Private Network (VPN).
Ian Garland Streaming, Kodi and VPN Expert 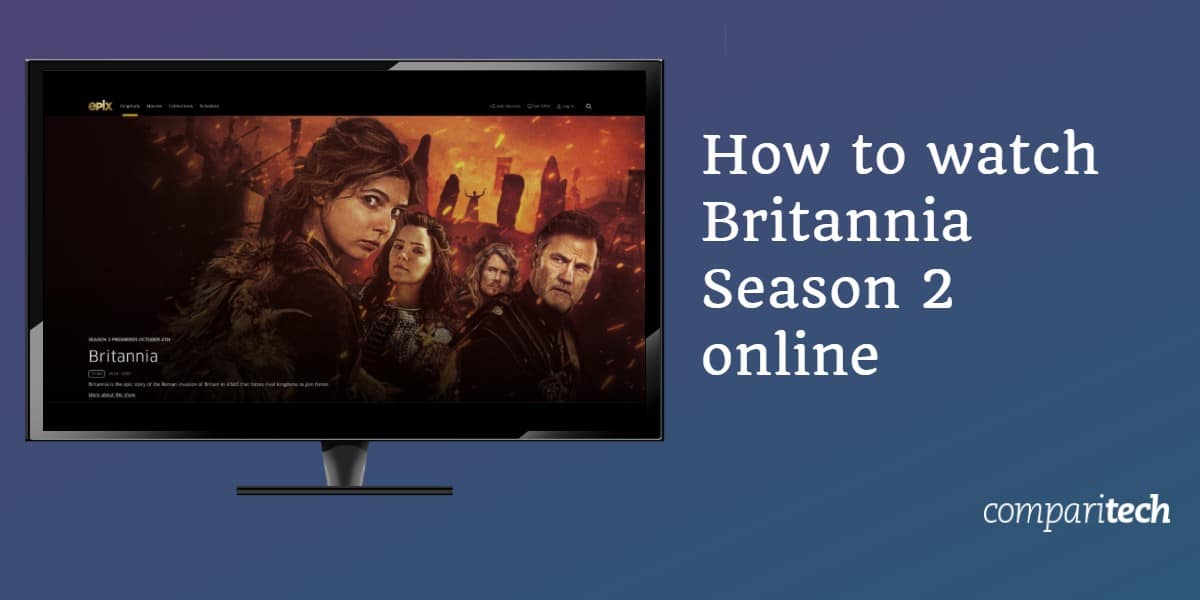 The second season of Britannia actually premiered back in 2019 but it’s taken this long to arrive in the US. The wait is finally over, though, with new episodes airing every Sunday from October 4. With ten episodes in all, we can expect the new series to end just before the new year, assuming it maintains a consistent release schedule over the holidays. There’s plenty to look forward to before then, though; read on to find out how to live stream Britannia season 2 from anywhere in the world.

It’s worth mentioning that this post will only recommend official Britannia sources. Unauthorized streams are notoriously unreliable and usually don’t offer anywhere near the same level of quality. On the plus side, there are plenty of legitimate ways to stream Britannia online, so you shouldn’t have much trouble finding an official source, regardless of where you are.

Season 2 of Britannia will only be broadcast on region-locked streaming platforms. This means that if you’re traveling abroad, you’ll need a VPN to watch on the services you’d use back home.

How to watch Britannia from anywhere with a VPN

With the right VPN, you can unblock and start watching geo-restricted content in a matter of minutes. Setting up a VPN is simple, so don’t worry if you have never used one before, just follow our step-by-step guide below.

Here’s how to watch Britannia season 2 from abroad:

New episodes of Britannia will be broadcast live in the US. This is why it’s so important to spend a few minutes making sure your VPN works as expected before the first episode airs. After all, American fans have waited a long time for this, so it’d be a shame to face further delay due to last-minute technical issues.

How to stream Britannia season 2 on US TV

Epix is now the official home of Britannia in the US, having purchased the rights from Amazon last year. It’ll be showing the second season from October 4, with reruns from season one in the days before. Of course, you can also watch recently-aired episodes on-demand if you’d like. Further, this service will be the exclusive US broadcaster of the third series, which is currently in production.

If your cable package already includes Epix, you can just sign into the website and start watching right away at no added cost. Alternatively, if you’d prefer to watch Epix without cable, you can log in with a Sling TV or YouTube TV account. The cheapest way to watch, though, is to get the Epix addon for Amazon Prime Video, which costs $5.99 USD per month.

The above services are all geo-restricted, so you’ll need a VPN to access them abroad. Don’t have one yet? ExpressVPN provides a 30-day money-back guarantee that allows you to try it out risk-free. If you’re unimpressed, simply cancel to claim a full refund, no questions asked.

Is Britannia airing outside of the US?

Britannia season 2 has actually been out for quite a while, so fans in other countries can binge the whole thing if they’d like. Take a look below to find out which networks are showing Britannia where you are:

British viewers can stream every episode of Britannia on Sky Go, assuming they’re already Sky TV customers. There’s no need to worry if not, though; Now TV also includes this show with its Entertainment pass (£9.99 per month following a seven-day trial). It’s also possible to purchase seasons one and two for £9.99 and £11.99, respectively, on Amazon Prime Video. However, there’s very little reason to do so given that other options are much less expensive.

All of the services we’ve mentioned are region-locked, meaning you won’t be able to watch Britannia on them if you’re outside the UK. However, if you use a British VPN server, you should be able to access them as normal from anywhere.

It’s really quite easy to stream Britannia in Canada. That’s because CBC Gem currently offers both seasons completely free of charge. You will have to create an account before watching, and this service is ad-supported, but these are reasonable compromises, all things considered.

CBC Gem is geo-restricted and usually inaccessible from outside Canada. That said, you can log in and use it abroad by connecting to a Canadian VPN server first.

Foxtel TV customers can stream both seasons of Britannia at no added cost using the service’s website or the Foxtel Go app. Unfortunately, if you don’t have cable, your only other option is Foxtel Now. Prices start at $25 AUD per month, but as this show is included in the base channel pack, there aren’t any additional costs to worry about. Further, as Foxtel Now comes with a 10-day free trial, it’s possible for determined viewers to stream all 19 episodes, and then just cancel to avoid being charged.

These services are only available in Australia. If you’re out of the country at the moment, you’ll have to use a VPN to access them.

Britannia season 2: what to expect

The second season of Britannia is a little different, but there are still enough familiar components to keep fans coming back. To start with, it begins two years after the events of season one. Aulus is ruling the roost but the Celts and Druids have teamed up to put a stop to this. However, the return of a man who was previously dead throws a spanner in the works and things quickly get out of hand.