We take a look at the best VPNs for India. Whether you are in India and want a VPN to keep your internet connection secure or access your favorite international or blocked content we have you covered. These VPNs are also suitable for those outside of India who want to stream Indian content abroad.
Osman Husain Tech journalist, VPN and streaming expert 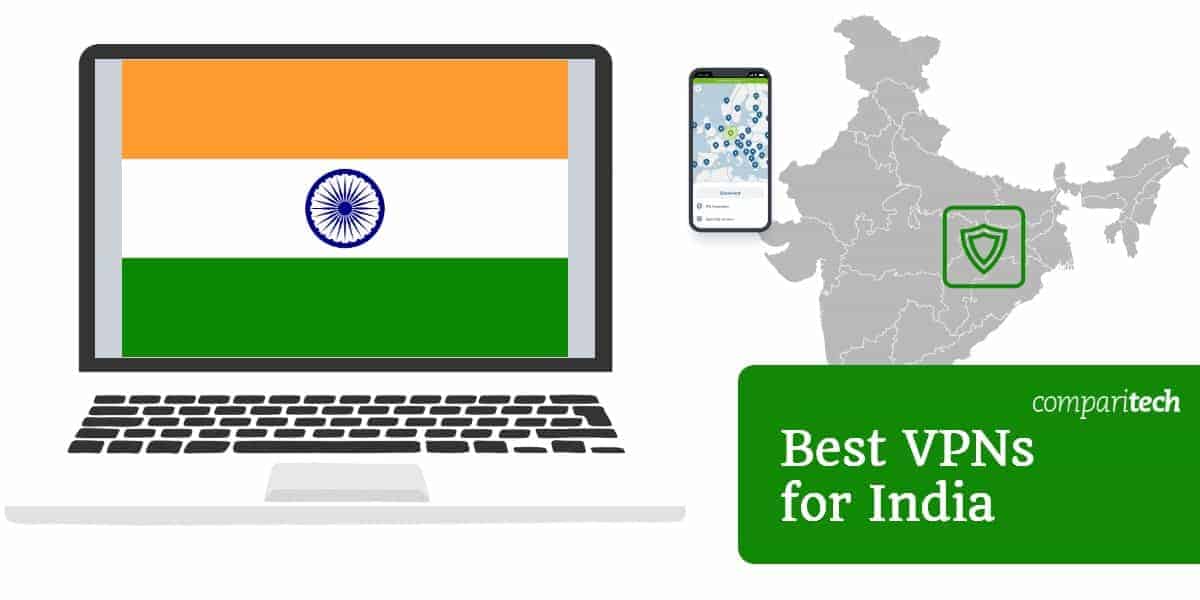 We take a look at the best VPNs for India and some that you should avoid if you really care about protecting your privacy.

There’s a staggering 462 million internet users in India, making it the world’s second-largest internet market after mainland China. The US, at 286 million, is a distant third.

But the worrying part is that Indian authorities are clamping down on web content and services at an unprecedented rate. The Freedom on the Net 2016 report gives the Indian internet landscape a poor 41 out of 100 rating, saying it’s only “partly free.”

The advocacy body explained that users in the South Asian country faced obstacles to access, limits on content, and violation of rights. That’s despite the fact that India exhibited some gains in the 2014 and 2015 editions of the report.

We get into a lot more depth with each of the VPNs that circumvent internet restrictions in India, but if you haven’t got the time to read through the whole article, here are our top picks:

In 2016, there were 23 separate instances in India where authorities forced service providers to shut down mobile internet services while 17 people were arrested for circulating information on platforms like WhatsApp.

These infractions are a major reason to consider using a VPN service. Short for Virtual Private Network, a VPN encrypts and secures all the internet traffic to and from your device making it impossible for authorities, internet service providers, and agencies like the NSA from snooping on your activity.

A VPN can also be used to access torrent sites like Torrentz.eu and Kickass Torrents, both of which are blocked in India. Read our guide to the best VPNs for torrenting if your explicit aim is to download torrents seamlessly.

Our list of the top VPN services for India is based on the following factors:

Based on our testing and research these are the best VPNs for India:

NordVPN has a strict “zero logs” policy, meaning it does not track user history under any circumstances. There’s no way to determine what sites users visit or how often they log on.

It also uses 256-bit AES encryption as standard and gives users the option of connecting to a DNS proxy.

There’s a bunch of other great features, too, such as double VPN, Tor over VPN, and anti-DDoS servers. It’s optimized for ultra-fast streaming and one subscription grants you access to six simultaneous devices with support for Windows, Mac OS, iOS, and Android.

The fact that NordVPN is registered in Panama means it’s not subject to any data retention laws forcing it to reveal user history. It’s possible to pay via Bitcoin, meaning paper trails are kept to a minimum.

Its commitment to blazing speed means it’s an excellent choice to unlock geo-restricted content on Netflix, Hulu, and BBC iPlayer. There are also a couple of servers based in India, which means residents of the country can access local content even when abroad.

BEST VPN FOR INDIA:NordVPN is our Top Choice. A solid performer in India. Great at unblocking geo-restricted content. A top choice for security and privacy. Use up to 6 devices at once with great connection speeds. Try it risk-free with their 30-day money back guarantee.

CyberGhost is a no-frills VPN provider that’s relatively inexpensive but doesn’t compromise on the essentials: a speedy connection and rigid encryption. The company has an internal policy of not storing any user data which will please privacy advocates.

Currently, there are 1,098 servers to choose from spread across 40 countries, including India. Local residents traveling abroad should be able to acquire an Indian IP address to unlock services and content from back home.

A few weeks ago there were only about 30 countries on its list so there’s clearly a lot of work being done to improve the quality of service. It’s likely that the server network will keep expanding.

Its encryption standards are considered to be top-tier. Specifically, CyberGhost Pro uses 256-bit AES encryption on the OpenVPN protocol by default along with 2,048-bit RSA keys and MD5 HMAC authentication. It’s unlikely that your data will ever be exposed. There’s an internet kill switch included, too, which adds an additional layer of security.

CyberGhost Pro doesn’t work with Netflix but unlocks BBC iPlayer with ease. The provider supports both Android and iOS as well as PC and MacOS.

BEST BUDGET VPN:CyberGhost has a simple set up. Another affordable choice. Good on privacy. Streams HD video reliably. May struggle with some streaming sites. 45-day money back guarantee.

IPVanish owns and operates all of its server locations across the globe (unlike most other VPN services which prefer to rent). Hence it’s in total control of all the data passing through its systems with greatly minimized risk.

Both DNS leak protection and a VPN kill switch are included as standard options.

It comes with 256-bit encryption on the OpenVPN protocol and accepts Bitcoin as a payment method.

While the company is based in the United States, it does not store any traffic or metadata logs, meaning user activity is safeguarded and secure. At the same time, it operates several servers in India which means users traveling out of the South Asian country can still access their favorite sports and entertainment shows.

GOOD FOR TORRENTING:IPVanish offers strong privacy and security with a huge number of IPs and servers plus additional protection against DNS leaks. Struggles with Netflix. Popular with Kodi and torrent users. 7-day money back guarantee.

PureVPN is one of the larger VPN services because of its gigantic user base and a plethora of server locations spread across the world.

Its services come with 128-bit encryption as standard as well as secure DNS and a VPN kill switch – meaning it’ll halt your traffic if the connection drops in order to prevent leakage of data. Hence, if you’re using the VPN to seed torrents or access sites prohibited in India, there’s still no way of having your identity exposed and potentially causing a legal quagmire.

The company is headquartered in Hong Kong – another place where there’s no data retention laws to speak of. Its privacy policy is clearly outlined on the front page of its site – there’s explicit reference to the fact that they do not store any user data, meaning it’s impossible to determine what sites people are visiting.

It does, however, keep track of the time users logged in and the IP address they used.

PureVPN is also a worthy choice if you’re planning on being out of the country for a few weeks. It’s servers in India mean local content won’t be out of reach – which is normally the case if you try and access from a location in, let’s say, North America.

Read our full review of PureVPN.

ExpressVPN is one of our favorite VPN services because of its reliability, commitment to user privacy, and blazing fast speeds.

Like most VPN companies, Express is registered in a country which doesn’t force it to share data. In this case, it’s the British Virgin Islands where it’s completely out of the reach of authorities.

The VPN service is encrypted with 256-bit AES protection, and it keeps no traffic logs whatsoever other than the choice of server location, total amount of data transfer, and date (not time) of connection.

It’s also an excellent choice for unlocking geo-restricted content on Netflix, Hulu, BBC iPlayer. At the same time, it has server locations based in India itself, so accessing local content – like Hotstar – won’t be a problem if you’re a resident Indian but traveling abroad for leisure or work.

TICKS ALL THE BOXES:ExpressVPN holds its own. A fast and reliable choice which confidently unblocks content that is restricted in India. Great privacy features and keeps no logs. There are cheaper options. 30-day money back guarantee.

There’s always the possibility of searching for a free VPN service. Such software isn’t hard to find – a cursory search on Reddit or Google will result in a plethora of options.

However, our recommendation is to avoid these traps. Such services are in the business of making money too – so while the product may come across as free, it isn’t nearly as simple as that.

When you log on to a free VPN, you’ll be bombarded with spammy referral links and tons of invasive advertisements. You run the real risk of contracting a malware infection that can lead to data loss and/or machine corruption. And, in some cases, free VPN providers have been caught mining their users’ data and selling it to third-party companies. That belies the whole notion of surfing the web securely and privately.

To overcome these restrictions, people in India have to change their IP address to one in either Europe or North America. The VPNs recommended in this article can do exactly that. Simply sign up, download the apps, and choose a server from any major European or North American country. Once the connection has been established, you’ll be able to access whatever sites you want regardless of government restrictions.

What is the future of Indian internet?

Advocacy and rights groups in India continue to work tirelessly to secure the future of the internet and ensure net neutrality. The rejection of Facebook’s Free Basics project was a watershed moment for such groups who argued that Zuckerberg was offering a watered-down version of the web that would eventually help his own company rather than assist ordinary Indians with access to digital skills and literacy.

But the Hindustan Times notes that content blocking continues to exhibit an upward rise with Facebook receiving the maximum number of requests from India to block content.

Until there’s a more concerted effort to promote freedom of speech, it’s likely that clampdowns on the internet will continue in India.