How to watch Better Things season 4 online from anywhere 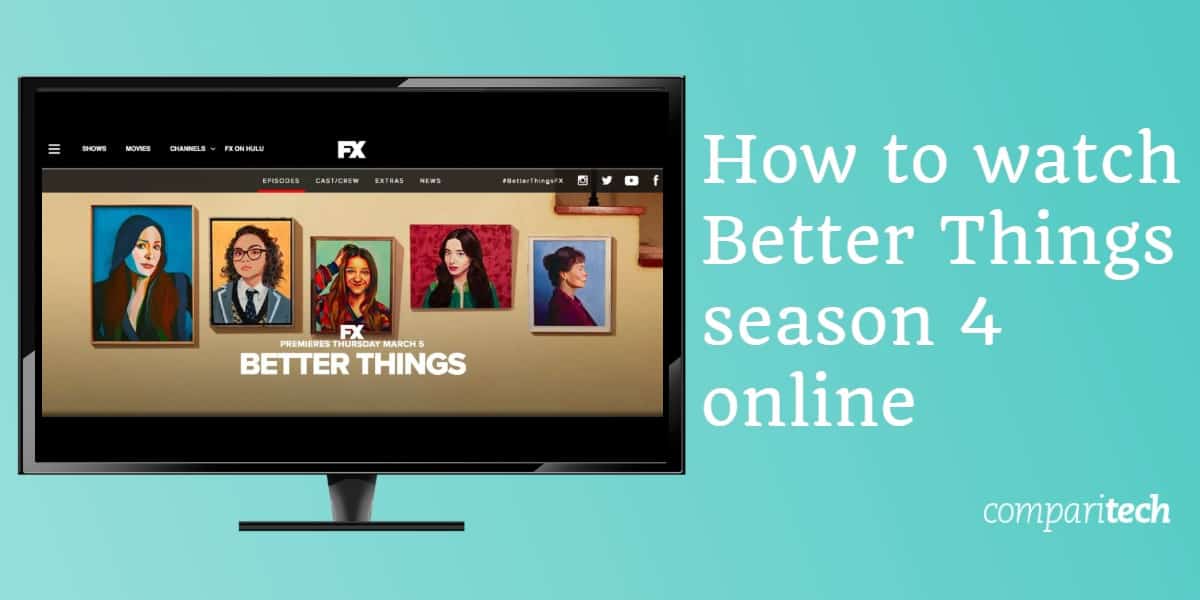 Better Things season 4 will premiere on Thursday, March 5, at 10 PM EST (7 PM PST) on FX. The critically acclaimed comedy-drama series continues to follow Sam Fox, a single mother trying to make it as an actress in Hollywood. Read on to find out how you can watch Better Things online from anywhere, even abroad.

In this article, we’re only covering official sources for watching Better Things season 4. The trouble with unlicensed streams is that they run the risk of being taken offline for violating copyright. What’s more, they’re usually low resolution and far too slow due to lag and buffering. There’s no need to waste time on unauthorized streams because there are a number of official sources you can use to watch Better Things season 4 online.

Better Things season 4 will only air on region-locked platforms. By connecting to a VPN, you can continue watching abroad via your usual streaming services back home.

How to watch Better Things season 4 online with a VPN

A VPN allows you to change your IP address and virtual location. For example, connecting to a server in the US provides you with an American IP address. This means that you can use a VPN to unblock geo-restricted services and stream Better Things season 4 abroad.

Here’s how to watch Better Things season 4 online from anywhere:

New episodes of Better Things will air live on FX. For this reason, it’s worth testing your VPN with FX in advance of the season 4 premiere. If you encounter any issues, you’ll still have time to contact your VPN’s customer support for further assistance.

How to watch Better Things season 4 on US TV

Better Things season 4 will premiere on FX. If you have a US cable TV subscription, you can sign in to FX using the login credentials you use with your TV provider. Fortunately, FX is also available cable-free via the following streaming services: AT&T TV Now ($65 USD/month), Hulu ($54.99/month), Sling TV ($30/month), and YouTube TV ($49.99/month).

FX and the above streaming services are only available in the US. To access this region-locked content from abroad, you’ll want to connect to a VPN’s US server for a US IP address. It’s worth knowing that ExpressVPN includes a 30-day money-back guarantee. The advantage of this is that you can try it out risk-free and request a full refund if unsatisfied.

Where else can I watch Better Things?

FX is the only place you can watch the premiere of Better Things season 4. However, the previous seasons are available elsewhere. This suggests that season 4 will also become available on such platforms in the not-too-distant future.

One of the main alternatives for watching Better Things is Hulu. At the time of writing, it offers seasons 1–3. Hulu subscriptions cost $5.99 USD per month or $11.99 monthly if you’d prefer to watch without ads. Furthermore, Better Things seasons 1, 2, and 3 are all available on various versions of HBO in Europe, including HBO Nordic.

An alternative to a monthly streaming subscription is the option to purchase individual episodes and seasons of Better Things. You can do this on Amazon Prime Video where a single episode costs $2.99 while each season is priced at $9.99. While both HBO and Hulu content is geo-restricted, you can stream it abroad with the help of a VPN.

What can we expect from Better Things season 4?

Fans of Better Things can look forward to 10 new episodes. The official trailer for season 4 provides us with a glimpse of what to expect. In particular, Frankie and Duke want to introduce Sam to the world of online dating. We also see Sam make an impractical car purchase — an act that she describes in her own words as her “mid-life crisis!” Pamela Adlon has revealed that some of season 4’s themes include rain, couples, and being alone.

Which cast members are returning for Better Things season 4?