How to watch Hawkeye on Disney+ from anywhere

Want to stream Hawkeye the moment it releases? It premieres on Disney+, which means you might need a VPN. We explain how to watch Hawkeye from anywhere – and recommend the best VPNs.
Ray Walsh VPN and privacy expert 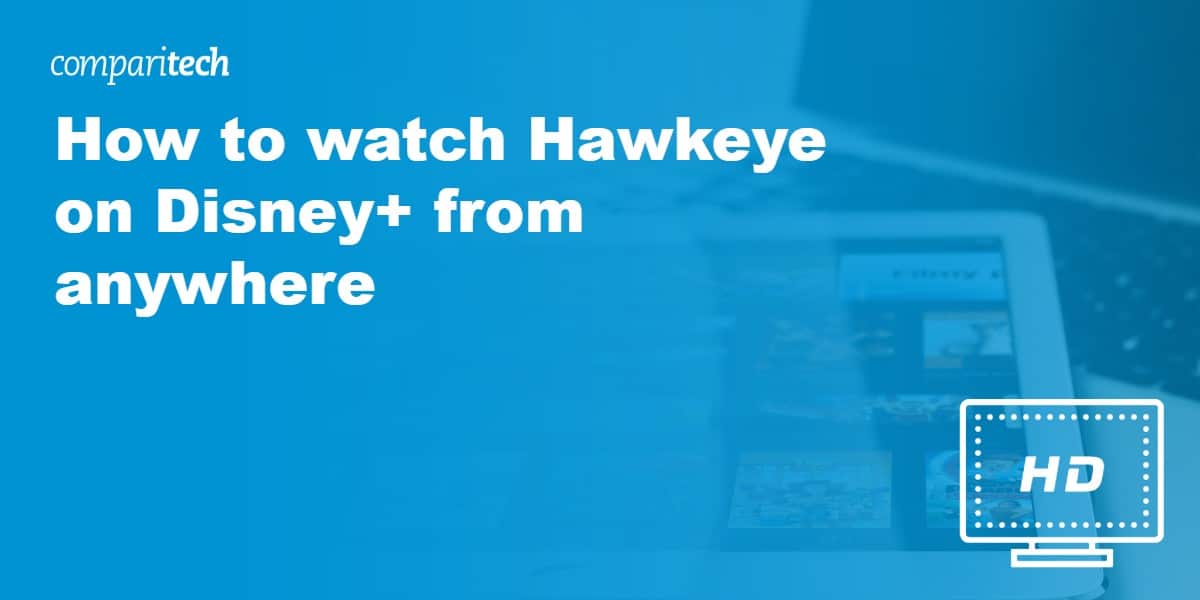 If you are a fan of Marvel Cinematic Universe (MCU), you have probably been waiting impatiently for the release of its fifth television series, Hawkeye. The show was first announced back in April 2019, but because of COVID, the series has been in production longer than expected.

Now, fans of the action-superhero genre finally have a release date for Hawkeye – November 24. The new adventure series will appear exclusively on Disney+, which means that anybody on vacation will need to use a VPN to stream the show with their account.

The good news is that Disney Plus is now available in more than 40 countries. With a VPN, you can easily get an IP address for back home to watch Hawkeye the second it drops.

In this guide, we will explain how anybody can stream Hawkeye online, and we will recommend the best VPN to watch Hawkeye in HD.

How to stream Hawkeye with a VPN

If you are on vacation when Hawkeye premieres, you may be wondering how to stream your Disney+ account while abroad. The good news is that anybody can pretend to be back home using a VPN.

The only hard part is finding a VPN compatible with Disney+. However, we have done the hard part for you by finding VPNs that will definitely work to watch Hawkeye abroad.

Here’s how to watch Hawkeye online from anywhere:

As soon as your VPN connects to a server in the US (or elsewhere), you will receive an IP address in America. As a result, you will be able to stream Hawkeye while on vacation. Just remember that not all VPNs work with Disney+, so be sure to stick to NordVPN to get a service that is fast enough to stream Hawkeye in HD! NordVPN offers a 30-day money-back guarantee so you can watch it risk-free.

WANT TO TRY THE TOP VPN FOR HAWKEYE RISK FREE?

NordVPN is offering a fully-featured risk-free 30-day trial if you sign up at this page. You can use the VPN rated #1 for Disney+ without limits or restrictions for a month – great if you want to watch Hawkeye while on vacation.

Can I watch Hawkeye with a free VPN?

No. Unfortunately, there are no free VPNs that currently work to stream on Disney+. Free VPNs are highly subscribed, which leads to server congestion.

In addition, free VPNs engage in throttling and enforce download limitations. This slows down the VPN further and makes it impractical for streaming video content. As a result, free VPNs are not suitable for streaming HD content.

Disney+ works hard to spot and block IP addresses that belong to VPNs. Due to the fact that free VPNs have static IPs with many users, it is extremely easy for Disney to blacklist free VPNs. This means that you will need to get a market-leading VPN service to watch Hawkeye.

Besides the performance issues. Free VPNs are also highly risky in terms of privacy and security. Free VPNs harvest user data to create a revenue stream. They sell user data to third parties, and they use data to serve targeted ads. Free VPNs have also been found to contain malware and to provide badly implemented encryption or suffer from severe data leaks.

When is the Hawkeye premiere?

The premiere of Marvel’s new superhero adventure will be on Wednesday, November 24. The first two episodes will release on that date. The following episodes will be released weekly, concluding on December 22.

The show will be released in all markets simultaneously. This means that as long as you have a subscription to Disney+ you will be able to watch each episode the moment it airs.

Where can I stream Hawkeye (TV show)?

Hawkeye will be released exclusively on Disney+, and will not be available on any other platforms. Eventually, the show could make its way onto other platforms, however, this is unlikely to happen until long into the future because Disney will want to attract as many viewers as possible to its Disney+ platform.

What do we know about Hawkeye?

Marvel’s highly anticipated new show will star Jeremy Renner as Clint Barton (Hawkeye). According to critics who have had a sneak peek, the show is surprisingly light-hearted, making it a superhero adventure that is fun and easy to watch.

Hawkeye is the last of the Avengers characters to receive his own standalone series. The show picks up after the events of the 2019 movie Avengers: Endgame. That means the mini-series fits perfectly into Marvel’s existing body of work – and follows on from just after The Blip in which to be exterminated at random.

With the show streaming all the way up to Christmas, you will be happy to know that it is holiday season-themed. Based on the official trailer, critics are saying it draws on the nostalgia from classics like Home Alone and Die Hard.

We also know that Matt Fraction's original Hawkeye comic has been a major influence behind the new Marvel series. In the show, Hawkeye will fight alongside the skilled archer Kate Bishop to deal with past enemies and make it back to his family in time for Christmas day.

Will there be a standalone Hawkeye movie?

So far there is no sign that Marvel will be making a feature film about Hawkeye. However, nothing is impossible. If the show is a big hit, a standalone feature about this much-loved Avengers character could one day come to pass! We will have to wait and see.