How to watch Marvel’s Daredevil (Series 3) online from anywhere 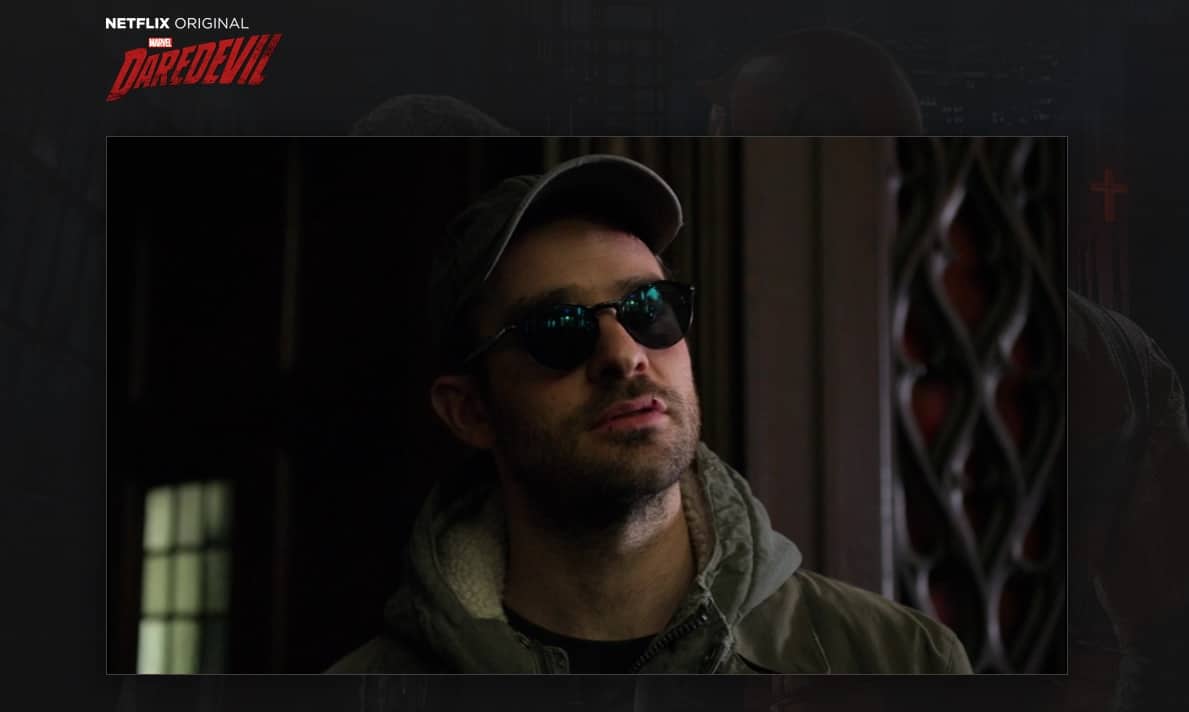 As with the previous series, Marvel’s Daredevil season 3 will have 13 episodes, all released on the same day: October 19. This is a global release date, meaning you won’t have to avoid spoilers just because you live outside the US. Below, we’ll explain where you can catch every episode of Daredevil’s third season.

You should note that we’ll only be recommending official sources in this post. Unlicensed streams are a sad inevitability for high-profile shows, but they’re often low-resolution and prone to being taken down shortly after upload for copyright violation.

VPNs encrypt your traffic, making it unreadable by any outside observers, like your Internet Service Provider (ISP). This greatly increases your online security, but you can also use a VPN to unblock and stream geo-blocked content. We recommend ExpressVPN: it’s fast enough to stream HD or even 4K video with no interruptions and has more than 2,000 servers worldwide. Further, ExpressVPN can unblock platforms most other VPNs struggle with, like Netflix and Amazon Prime Video.

Getting started only takes a minute and couldn’t be simpler. First, choose your subscription length (one, six, or twelve months) and pay. This starts a 30-day trial period, enabling you to evaluate the service and see if it’s a good fit for your needs; if it’s not what you’re looking for, just cancel to receive a full refund, no questions asked. You can also use this trial to get free, temporary VPN coverage. This is particularly useful if you’re going abroad on vacation or want to watch one particular geo-blocked event.

How to stream Daredevil abroad with a VPN

It might seem complicated but unblocking geo-restricted platforms with a VPN is actually pretty straightforward. Here’s how to watch Daredevil with a VPN:

If possible, we recommend performing the steps above before October 19. This gives you plenty of time to contact your VPN’s customer support team if anything doesn’t work as expected. Note: Netflix has very strong geo-restriction measures in place, and many VPNs have difficulty unblocking it. If you’re having trouble, customer support should be able to direct you to a suitable server.

Where to watch Marvel’s Daredevil online

Marvel’s Daredevil is exclusive to Netflix. The good news is that it’ll become available in every country’s Netflix library simultaneously, meaning you can technically watch it without a VPN when abroad. However, we still recommend using one, since some ISPs intentionally limit your speeds if you stream a lot. Given that Daredevil is available in 4K, it’s fairly data-intensive, and a VPN will make ISP throttling far less likely. Better still a VPN will open up international Netflix catalogs meaning you can view many more titles that are not available in all regions.

What if you don’t have a Netflix subscription? This service offers a free month-long trial, which is plenty of time to watch 13 episodes of Daredevil, especially since this show has a real “one more episode” appeal. Prices vary slightly from one country to another, but if you’d like to keep Netflix once the trial ends, you can expect to pay around $8 USD per month.

There’s another major advantage to streaming Daredevil on Netflix. If you’re visually impaired, you can choose to use the descriptive audio track which narrates the action onscreen whenever there’s no dialogue. While the show itself offers English, Spanish, French, Polish, and Portuguese audio, the descriptive track is only available in English. 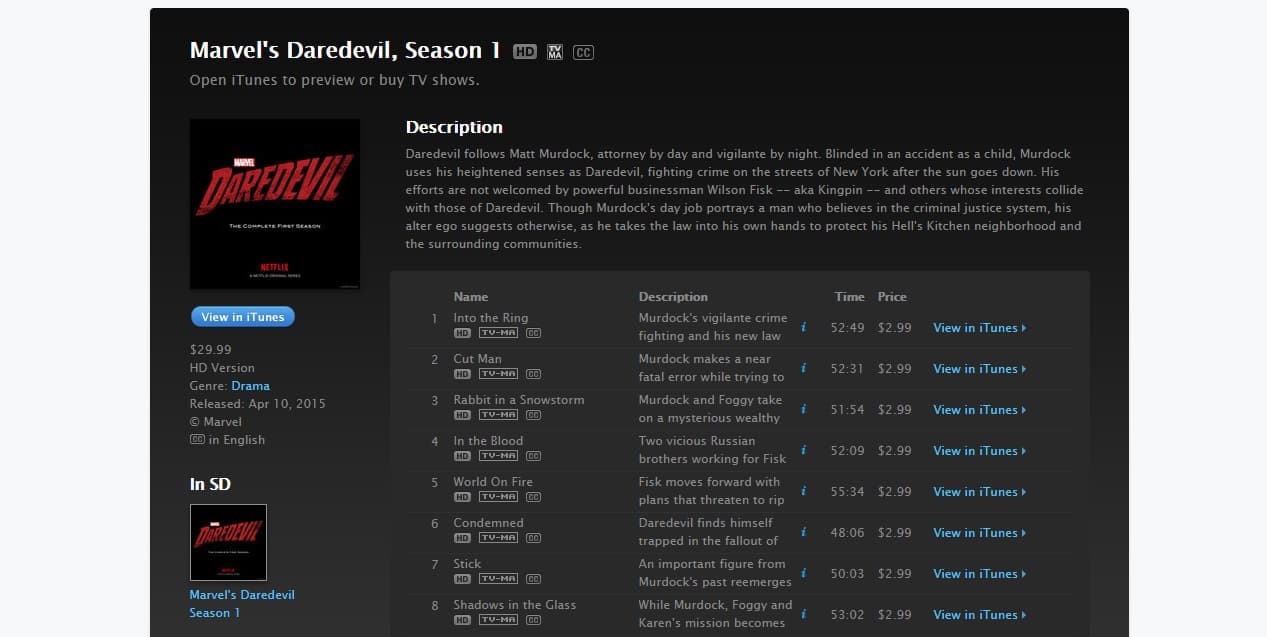 Seasons 1 and 2 of Marvel’s Daredevil are available for purchase on various online marketplaces including the Google Play Store, YouTube, the Sky Store, and iTunes. However, availability and price may vary based on your location.

There’s also the question of this method’s viability. After all, buying a single season this way costs more than the cost of a single month’s Netflix subscription. Even if you live in a country where Netflix isn’t available, it’s possible to sign up and use the free trial by connecting to a VPN server elsewhere. Additionally, Netflix accepts gift cards as payment, so it’s hypothetically possible to have a subscription regardless of where you are in the world.

Finally, there’s no guarantee that season 3 will be added to these marketplaces the same day that it airs on Netflix. In fact, as yet, there are no details on when exactly you’ll be able to watch Marvel’s Daredevil season 3 anywhere other than Netflix.

Can I watch Daredevil online with a free VPN?

You might be tempted to stream Marvel’s Daredevil with a free VPN but we advise against it. There are many paid VPNs that can’t unblock Netflix, so the odds of a free service managing are very low. Further, as these services often have more users than their servers can accommodate, they’re usually very slow. This means you’re limited to watching in lower resolutions, if the frequent buffering doesn’t make your show entirely unwatchable.

There’s an old saying that’s relevant here: if you aren’t paying for a product, you are the product. Free VPNs may not charge you upfront, but they absolutely make money from you, whether it’s by inserting ads into the sites you visit, or selling details of your activities to third parties without your knowledge. A good VPN anonymizes your online activities. However, by monitoring you with tracking cookies, then sharing the information, free VPNs undermine their own claims to increase your privacy.

Unfortunately, there’s no easy way to tell if you’re using a legitimate free VPN or simply a trojan or other form of malware. A 2015 survey of 283 free VPN apps on the Google Play Store revealed that almost 40% attempted to install malware on the user’s system, and over 80% were vulnerable to IPv6 leaks. Even well-known free VPNs come with risks, as we saw when one was caught selling its users’ idle bandwidth to run a botnet. The best way to protect yourself and your data is to use a reputable VPN with a transparent and privacy-focused logging policy. 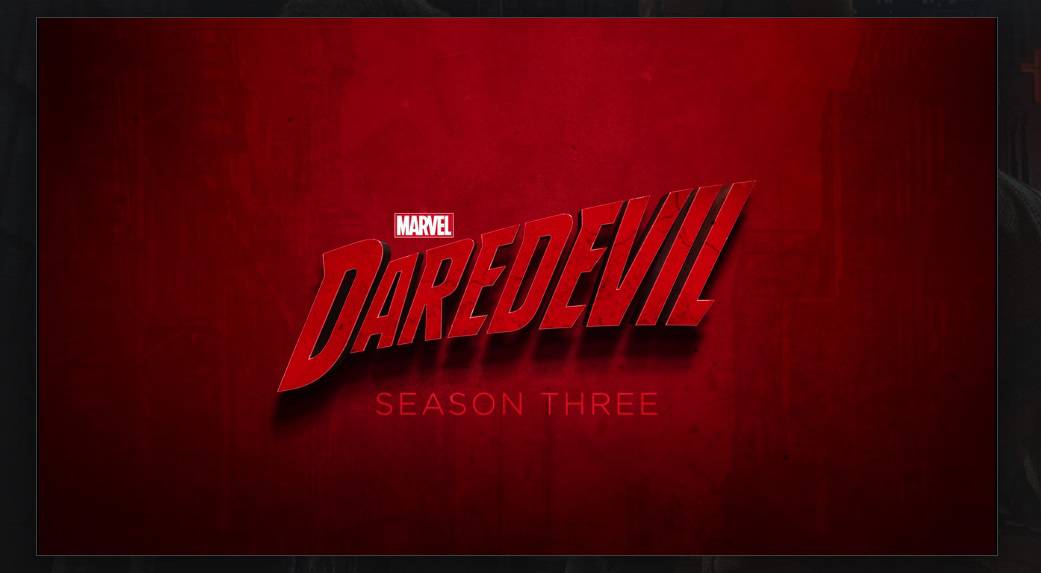 Although details about Daredevil’s third series are few and far between, we do know enough to speculate about what’s in store. Warning: minor spoilers follow.

Season 3 is to be based on the “Born Again” storyline from the Daredevil comic series. For the uninitiated, this marks a dark period in Matt Murdock’s life. It’s unclear how far the show will go with this, but as this arc sees his comic-book counterpart swiftly made homeless, disbarred, broken up with, framed, and stalked, there’s certainly plenty of room for things to go wrong.

Once again, the main antagonist this season is Wilson Fisk, better known as The Kingpin. Following a deal with the FBI, Fisk becomes an informant, all the while preparing for revenge against Matt for putting him in prison back in the first season. Of course, he can’t do it alone, and rumors are flying about a character named Bullseye.

Fans have speculated about this character showing up for some time, but it wasn’t until Netflix released its season 3 trailer that we actually got to see him in action. Bullseye is an assassin whose abilities are comparable to The Punisher’s, so one thing’s for sure: Matt Murdock is in for a rough time.