How to watch The Simpsons season 33 online from anywhere

Excited to watch The Simpsons season 33? Below, we’ll explain how to stream The Simpsons from anywhere, so that even if you’re traveling abroad, you won’t have to miss out.
Ian Garland Streaming, Kodi and VPN Expert 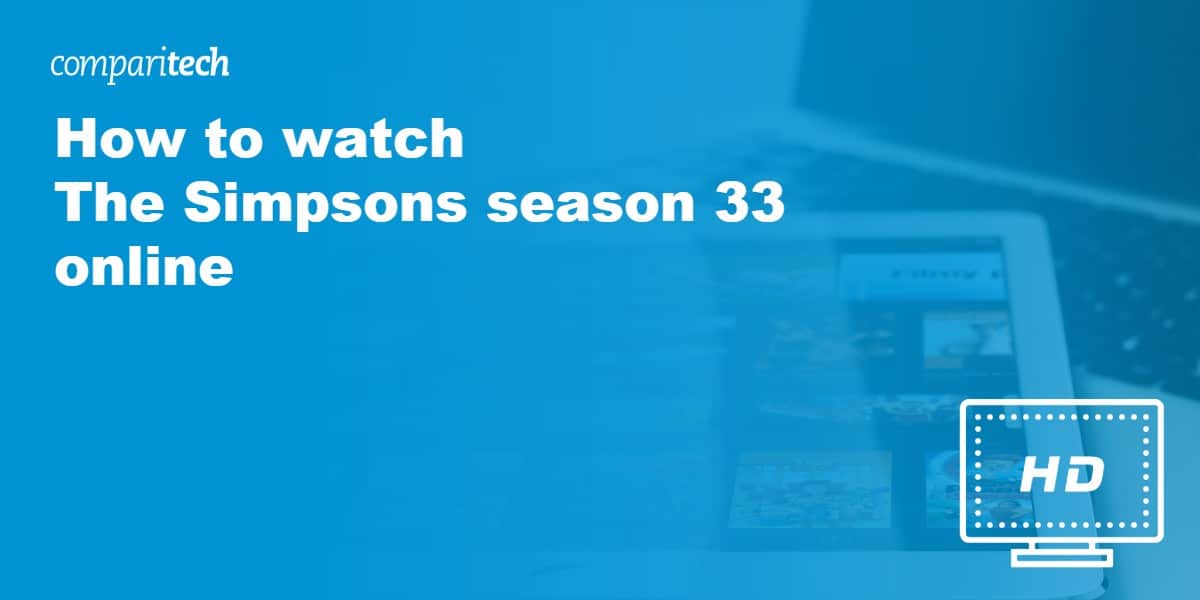 The Simpsons is a hugely popular show (it has, after all, run for more than 30 years). As such, there’ll likely be official streams available. That said, we don’t recommend using these; even putting legal and ethical issues aside, unlicensed streams tend to be laggy, with low-resolution video and a propensity for going offline at the worst possible moment. There are lots of official broadcasters offering free trials anyway, so there’s no need to rely on shady sources.

Most of the streaming services showing The Simpsons season 33 are region-locked. If you’d like to watch on your usual platforms while traveling, you’ll have to use a Virtual Private Network (VPN).

How to stream The Simpsons season 33 from abroad

VPNs are privacy tools that encrypt your data, preventing it from being read by your ISP, employer, or government. Because they route your traffic through servers all around the world, they can also be used to regain access to geo-restricted services while on vacation abroad.

Here’s how to watch The Simpsons online from anywhere:

New episodes of The Simpsons will be shown live, so if you don’t want to miss out, it’s a good idea to test your VPN ahead of time. This approach gives you more than enough time to get help with any problems you might encounter. Note that all of the VPNs mentioned above come with free 24/7 support, available over both email and live chat.

NordVPN offers a fully-featured risk-free 30-day trial if you sign up at this page. You can use the VPN rated #1 for streaming The Simpsons with no restrictions for a full month. This is ideal for anyone hoping to watch new episodes while on a short trip abroad.

FOX remains the home of The Simpsons, as it has since the show began. Fans can log into the website or FOX Now app using their cable provider details to stream the new season (and, at the time of writing, season 32) for free.

Hoping to watch The Simpsons season 33 without cable? It’s easier than you might think, since FOX also lets you sign in with a YouTube TV, Sling TV,  Hulu, or fuboTV account. Most of these services offer a free trial period, so if you’re patient, you can wait until the season ends, watch all of the new episodes during the trial, and cancel before you’re charged.

It’s remarkably easy to watch older seasons too since from September 29, they’ll all be available on Disney+. This service costs $7.99 USD per month and there’s no free trial, but this isn’t a bad deal considering it offers access to more than 700 previously-aired episodes.

These services are all geo-blocked and might not be available where you are. However, with the right VPN, you’ll be able to use them from anywhere. NordVPN comes with a 30-day money-back guarantee, allowing you to try it risk-free before deciding whether to keep it or not. If it doesn’t meet your expectations, simply cancel within 30 days to receive a full refund.

Where else can I watch The Simpsons online?

It should come as no surprise that The Simpsons is available for streaming in several countries outside of the US. Below, you’ll find a breakdown of which networks carry this show where you are:

Although we don’t have any details on when season 33 will be arriving in Canada just yet, we do know that all 32 prior seasons are available on Disney+. This costs $8.99 CAD per month and no longer offers a free trial. On the plus side, since every episode is in one place, it makes getting caught up nice and easy.

Disney+ changes its content depending on your location. This means that travelers may find The Simpsons is not available in their local Disney+ library. Luckily, you can regain access to your home country’s catalog from anywhere by using a VPN.

Just like in Canada, Disney+ is the place to go for older episodes. The British library currently includes the first 31 seasons of The Simpsons, and costs £7.99 per month. Season 32 aired on Sky One back in January 2021 but at the moment, can’t be streamed anywhere. If it does get another broadcast, you’ll be able to watch via Sky Go or Now TV’s Entertainment Pass (£9.99 per month, after a seven-day free trial).

Not bothered about which episodes you watch? In that case, you might want to tune into All 4. This service shows The Simpsons reruns almost every day and is completely free to use. Further, there’s usually a small selection of episodes that you can watch on-demand. Note that due to British laws, you will need a TV license to watch live, though.

All of these services are geo-restricted. If you’re traveling outside of the UK, you’ll need a VPN to use them.

As you might expect by now, the first 31 seasons of The Simpsons are available on Disney+ Australia ($11.99 AUD per month). Season 32 originally aired on FOX8, but for the time being, fans will have to wait for the reruns that are likely to begin shortly before season 33 arrives.

Existing Foxtel TV customers can stream FOX8 live online using the Foxtel Go app, while those without cable will have to pay $25 per month for Foxtel Now instead. The good news is that this channel shows older episodes pretty much every day. On the other hand, so does 7Flix, a free-to-air channel available via 7plus, so there isn’t much point in signing up until we have concrete details about the new season’s release date.

These services aren’t normally available outside of Australia but if you connect to an Australian VPN server, you’ll be able to use them no matter where you go.

What can we expect from season 33 of The Simpsons?

There’s actually quite a bit of information out there about the upcoming series! For instance, we know that the premiere (titled “The Star of the Backstage”) will be a musical episode with Kristin Bell providing Marge’s singing voice.

That’s not all! The third episode will be the first to feature five Treehouse of Horror shorts instead of the usual three. Of these, one will parody Bong Joon Ho’s blockbuster hit Parasite, while another, which was shown early to Comic-Con attendees, spoofs the morbid poems of Edward Gorey.

Fans will also get to see Moe find love (again) and Homer open up about “the greatest tragedy [he] has ever faced”. What’s more, we know that there’ll be a two-part episode at some point in November that’ll pay tribute to Fargo and streaming TV in general. It’s a little unclear what this means, but we can safely expect references to the biggest hits of the last few years.

Who is guest-starring in the new season of The Simpsons?

As ever, the new season of The Simpsons will feature a revolving door of guest appearances. A few of these have already been announced, and we’ll list these below: