How to watch the new Watchmen TV show online from anywhere 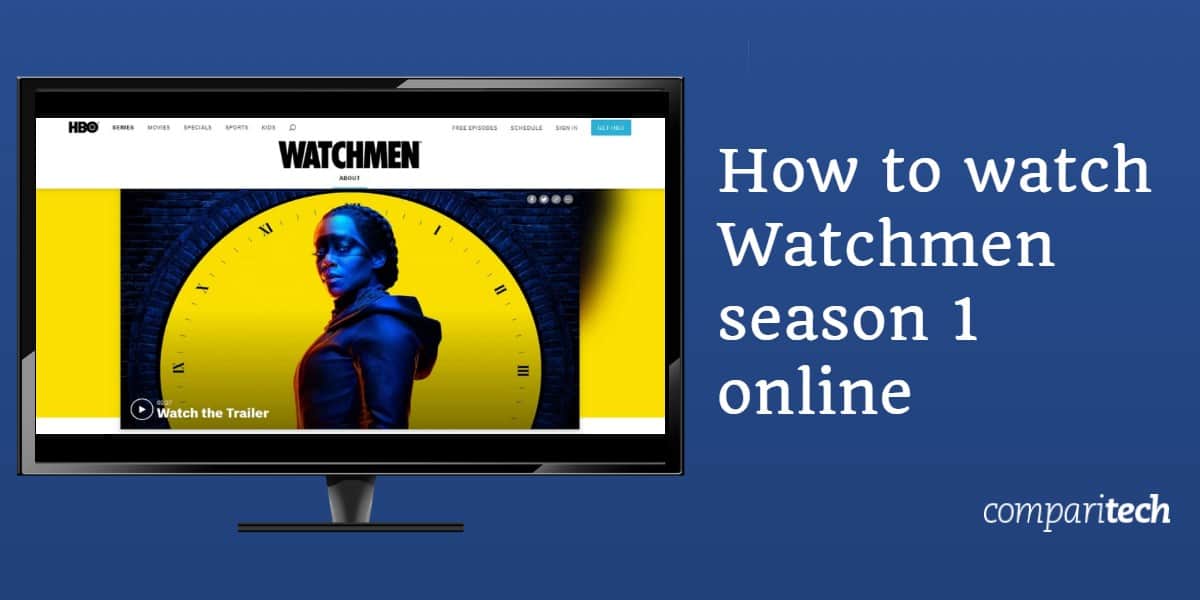 The first series of Watchmen will premiere at 9 PM EST (6 PM PST / 2 AM BST) on October 20. It’ll be a fairly short season, with just nine hour-long episodes, but on the plus side, international fans won’t have long to wait since Watchmen is being released almost simultaneously in several countries. Take a look below to find out how you can stream the Watchmen TV show from abroad.

It’s important to note that we’ll only be recommending official sources. Although unlicensed Watchmen streams will likely be available, these often only provide laggy, low-resolution video and to make matters worse, they can be taken offline for copyright violation without warning. There are plenty of legitimate ways to watch the Watchmen TV show online, so you have nothing to gain by using shady, third-party streams.

The Watchmen TV show will only air on geo-restricted streaming services. This means you’ll need a VPN to watch if you’re outside of a supported country.

How to stream the Watchmen TV Show online from anywhere

VPNs route your traffic through a server in another part of the world, hiding your true location and making it look like you’re actually in a different country. While this sounds complicated, VPNs are really quite simple to use. Just follow the steps below to unblock and stream the Watchmen TV show from anywhere in the world:

Watchmen will air live, which is why it’s important to spend a few minutes running through the steps above before the premiere date. This way, if you experience any issues, you’ll have time to get help from your VPN’s customer support team and might not have to miss the start of the first episode.

How to watch the Watchmen TV show live on US TV

Watchmen season 1 will air exclusively on HBO. While this service allows you to watch the first episode of many shows for free, you’ll have to sign in to stream the rest of the series. If your cable TV package already includes HBO, you can log into HBO Go and watch at no added cost.

Want to watch the Watchmen TV show online without cable? Luckily, you have plenty of options. You could sign up for HBO Now, for instance. This costs $14.99 USD and comes with a seven-day trial. It’s worth mentioning that HBO Now doesn’t allow you to watch Watchmen live, though; instead, new episodes will be added to the on-demand library within 24 hours of being shown on TV.

If you’d rather stream Watchmen season 1 live, you can either sign up for AT&T TV Now ($50 per month) or add the HBO channel pack to your Amazon Prime Video, Hulu, or PlayStation Vue subscription (for an extra $14.99 per month).

The above services are all region-locked and will only show the Watchmen TV show in the US. As such, you’ll need a VPN to watch from abroad. ExpressVPN comes with a 30-day money-back guarantee that allows you to stream Watchmen risk-free, and if you’re unsatisfied, you can just cancel to claim a full refund.

Where else can I live stream Watchmen online?

Unlike some other networks, HBO doesn’t leave its international fans waiting. The Watchmen TV show will be released in numerous countries within 24 hours of the US broadcast. Read on to find out how to stream Watchmen where you are:

In the UK, Watchmen will be shown at 9 PM, October 21, on Sky Atlantic. This means that if you’re already a Sky TV customer, you can easily watch online via the Sky Go app. If you don’t have cable (or are with a different provider), you’ll have to sign up for Now TV instead.

This service costs £8.99 per month and comes with a free seven-day trial. As well as letting you stream Sky Atlantic live, Now TV will add new episodes of Watchmen to its on-demand library shortly after they finish airing.

Sky Go and Now TV are both geo-restricted, meaning you’ll have to either be in the UK or connected to a British VPN server to use them.

Watchmen season 1 will air simultaneously in Canada and the US. This means Canadian fans can stream new episodes live at 9 PM on Crave. If you already receive HBO and Crave as part of your TV subscription, you can log in and watch at no added cost.

It’s also possible to watch Watchmen online without cable, though. You just have to pay for Crave’s Movies+HBO subscription ($19.98 CAD per month after a one-week free trial). This will enable you to stream the show live, but it’s worth noting that episodes will also be available on-demand a few hours later.

Crave is region-locked and only available in Canada. You can still use this service abroad by connecting to a Canadian VPN server.

Australian fans can watch Watchmen every Monday at 12 PM AEST on Fox Showcase, starting October 21. If you’re busy at this time (and many people will be), you can catch a repeat at 8:30 PM that evening instead.

Existing Foxtel TV customers can log in to the Foxtel Go app and start streaming online immediately at no added cost. If you’re with a different provider, the only other option is to create a Foxtel Now account. This costs $25 AUD per month but comes with a 10-day free trial during which you can watch any channel you like.

Foxtel services are region-locked, so you’ll need a VPN to use them if you’re outside Australia.

What can we expect from the first season on Watchmen?

The Watchmen TV show is not a small-screen adaptation of the comics. Instead, it’s a story that takes place in the same universe, after superheroes were outlawed. That said, there will be a few connections to the source material: Doctor Manhattan, the original Silk Spectre, and Ozymandias are all slated to make an appearance.

The premise of Watchmen season one is fairly simple: after a Rorschach-worshipping cult begins targeting police officers, the police begin wearing masks. Over the course of nine episodes, we’ll see Detective Angela Abar (Regina King) push the boundary between peacekeeper and vigilante.