Does NordVPN work with Amazon Prime Video? We test it. 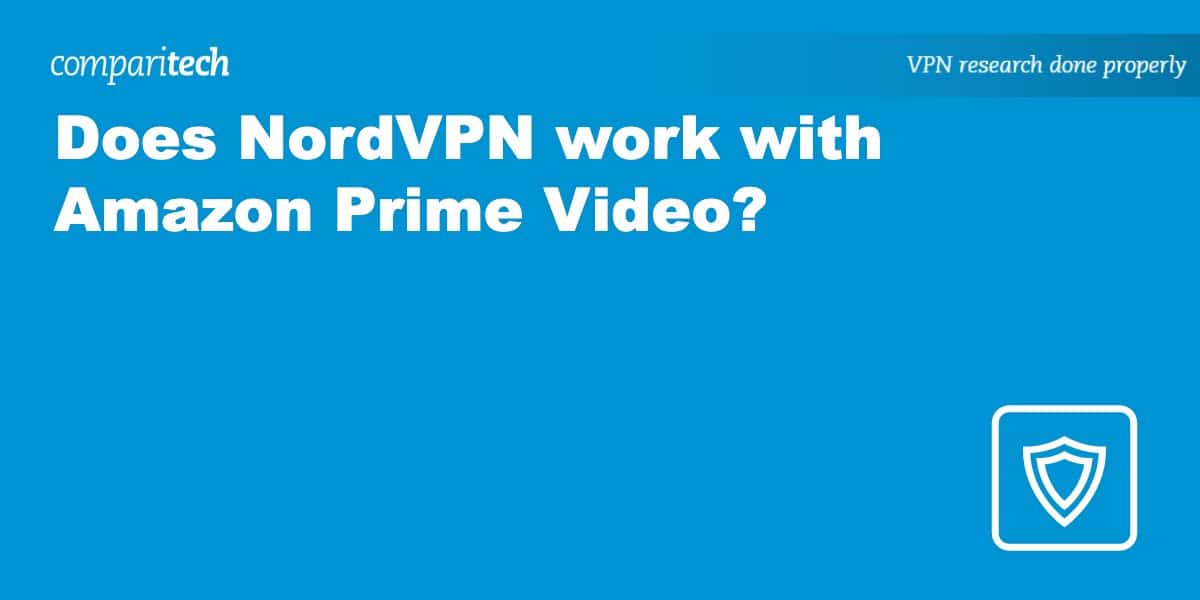 Like most major streaming platforms, Amazon Prime Video has different titles from one country to another. This service is available in over 200 countries (essentially everywhere except China, Cuba, Iran, North Korea, and Syria), so there are potentially thousands of shows you could be missing out on. Thankfully, VPNs enable you to use different IP addresses to spoof your location, so it appears as though you’re somewhere else in the world. You can then browse and stream from that country’s content library.

Of course, Amazon tries to prevent this by stopping users connected to a VPN from watching anything. It has fairly advanced VPN detection measures in place, and for this reason, there aren’t many VPN services that can still reliably unblock Amazon Prime Video. We set out to test NordVPN’s capabilities, and below, we’ll explain if it works, which countries’ libraries it can unblock, and how you can use NordVPN to stream Amazon Prime Video from anywhere. 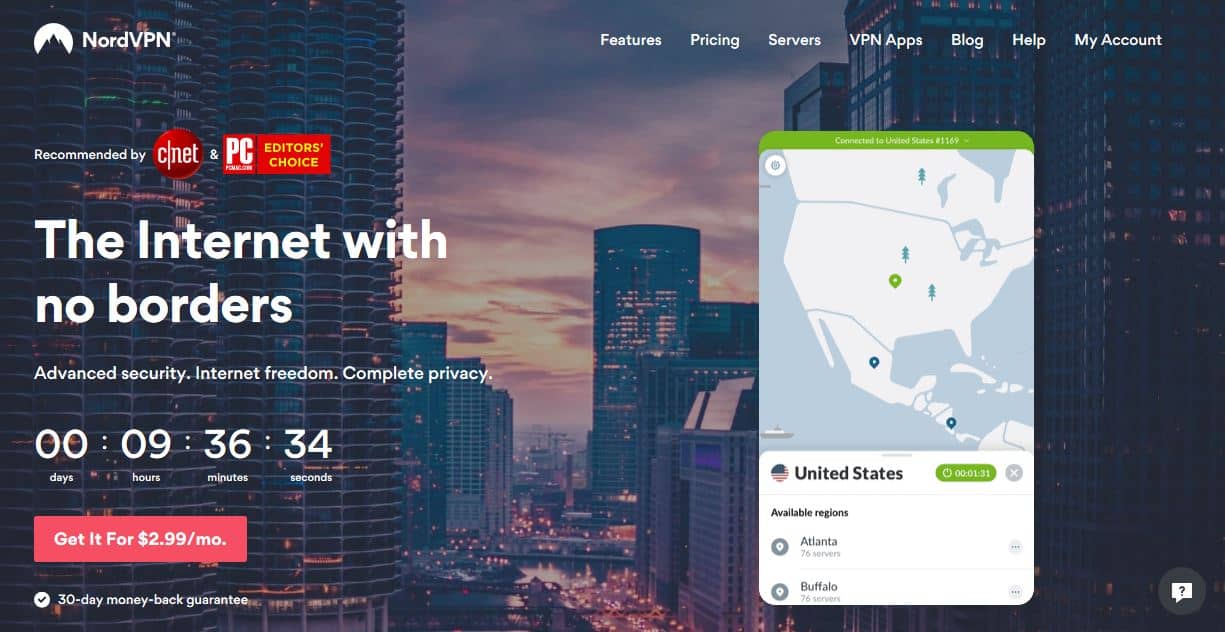 NordVPN currently has one of the largest networks of any major VPN provider, with over 5,500 spread across nearly 60 countries. It even offers specific servers optimized for file-sharing, DDoS protection, and anonymity. NordVPN has excellent unblocking capabilities and reliably enables you to access platforms like BBC iPlayer, Disney Plus, and Hulu from abroad. It also works reliably with Netflix. Additionally, you can choose to connect to a server in a particular city, making it possible to bypass regional blackouts and watch live sports online.

This VPN offers a huge range of security features designed to keep your activities private at all times. For instance, it includes 256-bit AES encryption, a customizable kill switch (desktop apps only), perfect forward secrecy, automatic wifi protection, and protection against DNS, IPv6, and WebRTC leaks. NordVPN does not log any personally identifiable information and allows you to pay with Bitcoin for increased anonymity.

Amazon Prime Video is a little different from platforms like Netflix. You can actually browse any country’s content library from anywhere in the world by simply visiting a specific country’s Amazon site. For instance, to see the US library, you’d go to www.amazon.com/av but to see Japanese content, you’d need www.amazon.co.jp/av.

However, without a VPN, you won’t be able to watch anything that isn’t included in your home country’s library. Instead, you’ll see a message saying:

“This title is not available in your location”

NordVPN is currently able to unblock the UK and US libraries. Other libraries are inaccessible due to Amazon’s extremely strict geo-locking measures rather than any failing on NordVPN’s part. In fact, there are very few VPNs that can even unblock Amazon Prime Video in these locations.

There is a slight catch, however: you can only access Amazon Prime Video on a desktop computer (Windows, macOS, or Linux). This problem affects every VPN, though, not just NordVPN; on mobile platforms, you’re forced to use the Amazon app, which only shows your home library regardless of whether you’re using a VPN or not. On the bright side, you can use whichever server you like since they all (apart from the ones in the UK and Germany) automatically access the US version of Amazon Prime Video, similar to what NordVPN does with Netflix.

NordVPN is offering a fully-featured risk-free 30-day trial if you sign up at this page. You can use the VPN rated #1 for Amazon Prime Video with no restrictions for a month—great if you want to binge your favorite show or are going on a short trip.

How to unblock Amazon Prime Video with NordVPN

Here’s how to unblock Amazon Prime Video with NordVPN

Free VPNs might appear to offer an easy way to access geo-blocked content abroad, but in actuality, this is rarely the case. With more users than their networks can adequately support, free VPNs often provide very slow speeds. This causes long buffering times and frequent stuttering and may limit you to low-resolution video, if you’re able to watch at all. Also, Amazon Prime Video is very good at detecting VPNs, so it’s highly unlikely a free service will be able to unblock this platform.

Although these services don’t charge you to use them, they’re not really free: you often pay with personal information instead. For instance, they can keep track of which ads you click and guess your likes and dislikes. Further, some free VPNs store tracking cookies in your browser that allow them to collect data, including the sites you visit most often, and the times at which you do so. This information can then be sold to advertisers without your knowledge.

It can be difficult to even find a safe free VPN to use. Recent research shows that of 283 apps surveyed, 18% didn’t encrypt user traffic at all. 84% and 66% leaked information over IPv6 and DNS, respectively. Worryingly, there were also dozens of malware-carrying apps posing as free VPNs hosted on the Google Play Store. Well-known services aren’t a guarantee of safety either; we’ve seen one sell its users’ bandwidth for profit (and facilitate a botnet in the process). To protect yourself and your data, we recommend using a trusted VPN provider with a customer-first privacy policy.

Do I have to create a new Amazon account?

No, you don't need a new account. However, while Amazon US allows you to login with an Amazon UK account and vice versa, other countries appear to have their own user databases and will say that your account was not found. This isn’t a problem yet, as NordVPN can’t unblock the service in these locations, but should it find a workaround, this will be another hurdle to overcome.

It might. That said, it’s worth noting that Amazon will still try to verify your actual location before letting you watch anything. If your VPN can’t unblock certain countries’ libraries, changing your home location won’t have any effect. Also, after you change your home location for the first time, you may have to contact customer support to change it again.

This means that if you were planning to change your home location whenever you wanted to stream, it would become extremely obvious to Amazon what you were doing. At this point, it’s up to Amazon: it could even decide to prevent you from using Prime Video entirely.

Do I need a VPN if I’m only travelling within the EU?

If you have a European Amazon account, you’ll be able to watch a selection of titles as normal when traveling through other European countries. Additionally, Prime Original content is accessible even when outside of Europe. However, the content available in these circumstances is fairly limited. By comparison, NordVPN allows you to access two full libraries from anywhere in the world.

What region-exclusive titles can I watch on Amazon Prime Video?

With NordVPN, you’ll be able to access dozens of country-exclusive movies and TV shows on Amazon Prime Video. We’ve included a short list of some of these below:

Is it legal to use NordVPN to access Amazon Prime?

Amazon Prime Video's Terms of Use makes specific reference to geographic location. Indeed, it states, "you may not use any technology or technique to obscure or disguise your location." However, this doesn't make it illegal. There's no track record of Prime Video suspending accounts for using VPNs. Instead, you may just find the VPN IP address becomes blocked. If this happens, simply switch servers to change IP addresses.