Having trouble choosing between Norton Secure VPN and VyprVPN? To help you decide, we compared the two services side-by-side to see how they stack up.
James Milin-Ashmore 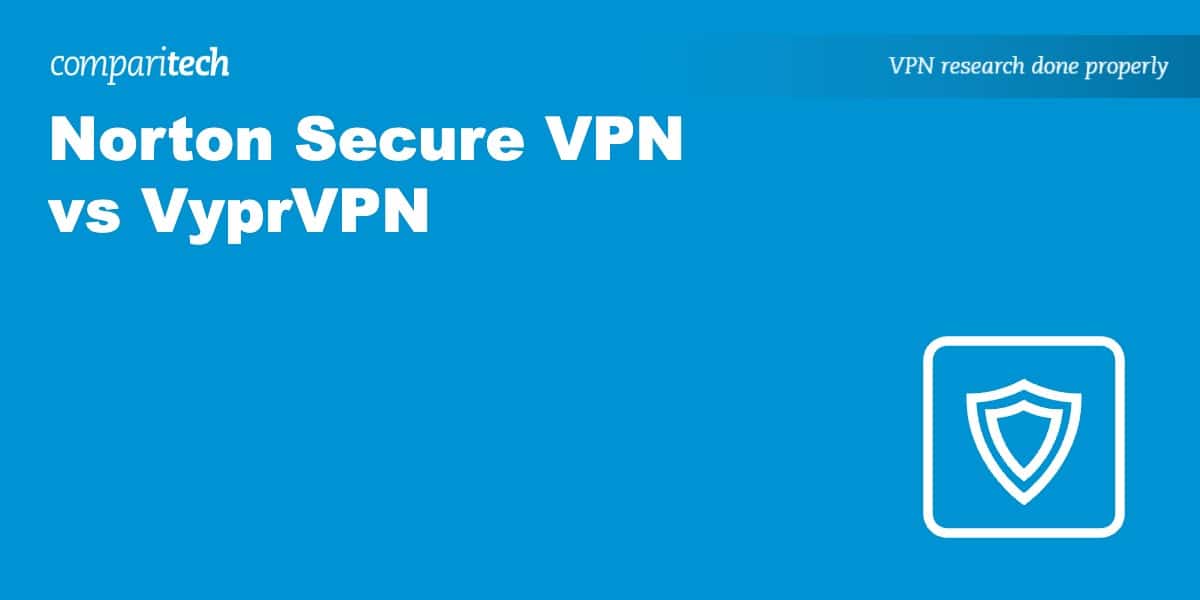 There are many competing Virtual Private Networks (VPNs) vying for your attention at any given time, overloading you with lots of technical jargon and hype that don’t mean much without context.

This can be overwhelming, which is why we’ve taken the time to examine Norton Secure VPN and VyprVPN in greater detail, putting both services to the test. This side-by-side comparison will note the key features of each provider, as well as give an explanation of the more technical aspects. which should help you make an informed decision between the two.

If you’re wondering which provider we would choose between Norton Secure VPN and VyprVPN, we’d have to recommend the latter. Read on to find out why VyprVPN wins this head-to-head.

VyprVPN comes in at a flat $15.00 per month, which is on the higher end of the pricing scale. That drops down to $8.33 per month for the yearly plan, priced at $100.00 every 12 months. You’ll be able to connect up to five devices at one time with a single account.

Each VPN offers a money-back guarantee, which can be used to cancel the service if it’s not right for you. You’ll have 30 days with VyprVPN, while Norton Secure VPN has a 60-day guarantee.

Norton is the clear winner in terms of affordability and flexibility. Norton Secure VPN is also part of the Norton 360 package, which contains a password manager and antivirus software. Norton 360 has a 14-day trial, which can also be used to test out its VPN.

The majority of streaming services are region-locked to a specific country. In other words, you might see different content from one region to another, or the streaming service might be blocked. VPNs can bypass these restrictions, but the servers and IP addresses they use are often banned.

Norton Secure VPN can access a decent collection of streaming services found in the US and the UK, including the likes of Hulu, HBO Max, BBC iPlayer, and CBS. However, it wasn’t able to stream Netflix, ITV, or ABC with any consistency.

Which of these VPNs works in China?

It’s difficult to escape detection from China’s strict policing of the internet. If you’re planning to visit the country, you’ll find that many websites are entirely inaccessible. However, some VPN providers will allow you to bypass the Great Firewall.

For example, VyprVPN uses proprietary software to get past any blocks, giving you the option of using its Chameleon metadata scrambling technology. This makes it ideal for use in China, Russia, the Middle East, or any other country that enforces internet restrictions. You’ll just need to select the Chameleon protocol, which VyprVPN also labels as “Anti-Censorship”.

Remember that the country bans VPN websites. As such, we’d advise installing the VyprVPN app ahead of time to be prepared.

VyprVPN’s desktop and mobile apps are lightweight and simple to navigate, with many shared features. For example, all of the apps aside from iOS come with a built-in kill switch. The macOS and Android apps support split tunneling, and there’s protection against DNS leaks. VyprVPN has automatic wifi protection, a kill switch, and it blocks malicious sites.

Norton Secure VPN has a different setup depending on which version you’re using. No matter if it’s the desktop app, the mobile app, or the version included with Norton 360, you’ll be able to connect with a single click, and the settings menu is easily located. The Norton Secure VPN app can also check your IP address.

Both VPNs offer apps for popular devices and operating systems, and there’s not much to separate them. In this respect, it’s a matter of personal preference.

VyprVPN has a network of more than 700 servers spanning over 70 countries. One key advantage is that it owns all of its own servers. Most providers rent servers from third-party hosting services, while ownership allows for greater security and reliable speeds. In comparison, Norton Secure VPN offers more servers but gives access to only half as many locations.

One positive is that Norton Secure VPN recorded some of the faster speeds we’ve seen during our VPN testing, averaging 317 Mbps. That’s more than quick enough for streaming 4K content or torrenting larger files.

With average download speeds of 258 Mbps across servers in North America, Asia, and Europe, VyprVPN is clearly a little slower in comparison. However, that is tempered by the fact that it’s available in more countries than Norton’s VPN. Average speeds of over 250 Mbps are still a great result.

Norton sticks with the OpenVPN protocol for most apps and uses IPsec with iOS. It’s not the most comprehensive setup, as you won’t be able to change the protocol to suit your needs.

VyprVPN allows you to choose between WireGuard, IKEv2, Chameleon, and OpenVPN. For example, WireGuard is open-source and easily auditable. It’s also one of the fastest VPN protocols. Chameleon servers are used to access websites from restricted countries such as China or Russia.

Based in the United States, Norton Secure VPN collects your source IP address, unique license and installation identifiers, and information about how you use the service. That’s not a great result, and it’s more than enough to identify a user. The US headquarters is also a negative, as the country is a member of the Five Eyes surveillance alliance. This means data could theoretically be shared with other participating member countries.

VyprVPN overhauled its logging policy in 2018, going so far as to conduct an independent audit to prove that no logs are maintained. The provider operates out of Switzerland and benefits from the tighter data privacy laws found in that country.

However, neither VPN has any anonymous payment options such as Bitcoin.

VyprVPN and Norton Secure VPN use shared IP addresses. In other words, every user that is connected to a specific server is assigned the same IP address. This makes it more difficult to find out what an individual user is up to, as there can be hundreds of people connected to a server at any given time. This should provide an additional layer of privacy.

Both VPNs use dynamic IP addresses. This will cause the IP address to change each time you connect, even if it’s to the same server location.

Neither VyprVPN nor Norton Secure VPN offers static or dedicated IP addresses. So it’s an even showing in terms of their configuration.

Ideally, you won’t spend any time dealing with customer support, but it’s always good to know that help is at hand, just in case.

Norton Secure VPN is the victor in this respect. For example, it offers a ticketing system that is built into its live chat. While it doesn’t have email support, you’ll be able to get in contact by phone with an expected wait time of three minutes. Norton has numerous local phone numbers in various countries, so it’s an inexpensive option.

In the past, VyprVPN provided 24/7 support via live chat. It has since been replaced with a link to search through its support pages for help. You’ll still be able to get in contact via email, although it’ll take longer for a response.

Norton Secure VPN leans on the support infrastructure provided by being owned by a Fortune 500 company. Meanwhile, VyprVPN leaves a lot to be desired, especially since it removed live chat.

VyprVPN is our winner. Norton Secure VPN is more affordable, has better customer service, and can even offer slightly faster speeds. However, we’re not fond of Norton’s invasive logging policy, the lack of protocols, or that it can’t access Netflix consistently. It’s not a bad deal if it’s been packaged with Norton 360 or a similar product, but it still lags behind most premium providers in many respects. At least you’ll have ample time to decide with a 60-day guarantee.

It’s true that VyprVPN is more expensive than the norm, but it owns and operates its own servers, and it’s decent for streaming. It has an audited no-logs policy, a range of protocols and can even access regions like China. As such, VyprVPN is our overall winner in this head-to-head.